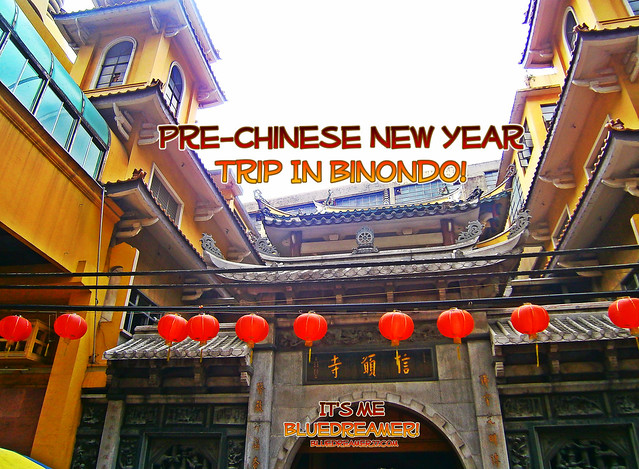 After that stomach-fulfilling breakfast at Cafe Mezzanine, our next stop is a well known Chinese temple in Manila. The original plan is to take a calesa ride from Binondo Church to Narra St but since my auntie called and joined us with our trip, we had to take a bigger ride. I contracted a Tricycle driver to take us there. Unlike the typical tricycle, the ones in Binondo are quite big and spacious. He asked Php100 for the ride but my Aunt told me that it’s too much for a short ride. I realized that you can actually walk from Binondo to Narra St since it is not that far. 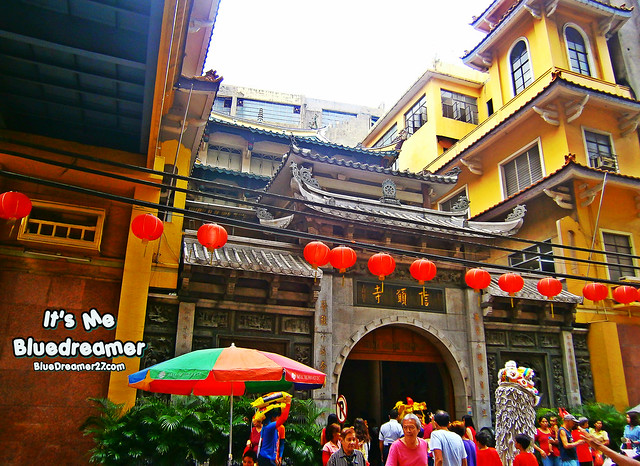 We were welcomed by an overwhelming crowd in front of the temple and there was a lion dance performance too. Seng Guan Temple is one of the well known Chinese temples in Manila and is considered as a major cultural center for the Chinese Filipino community.The temple was named after Venerable Seng Guan (1889-1962), a monk from Fu Kien (Fujian), China, who was active in teaching and organizing work in Southern China, Manila, and Rizal. His work laid the foundations for several institutions, including the Samantabhadra Institute in Santa Cruz, Manila, and the Hwa Chong Buddhist Temple complex in Tugatog, Malabon, Rizal (now Malabon, Metro Manila), where his ashes are enshrined in a stupa. 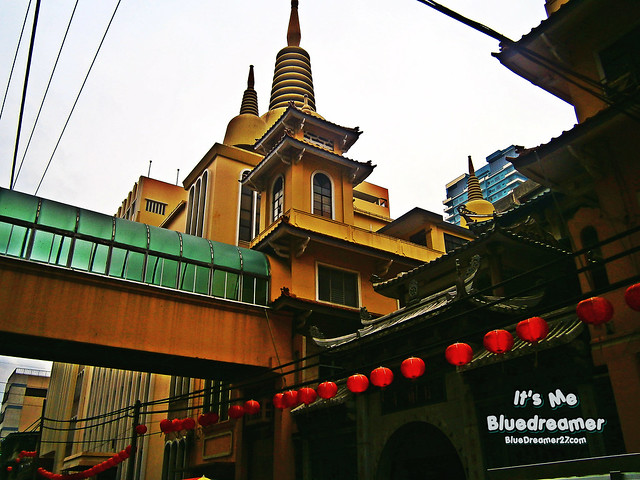 The Seng Guan Temple is considered as one of the most beautiful Buddhist temples in the Philippines.  It has a beautiful facade with a huge Stupa on top which can easily be noticed from a far. The exterior might look small but it’s surprisingly very spacious inside. I also noticed that the temple is connected to the building in front of it. 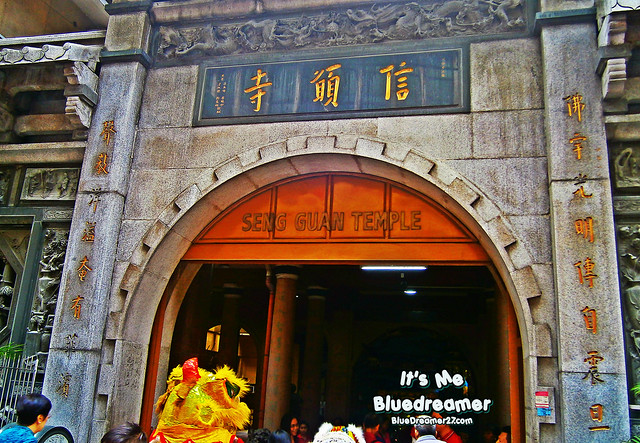 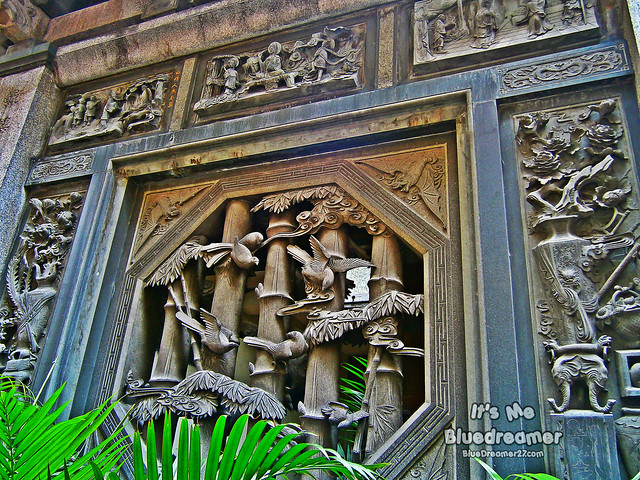 Check out these intricate carvings outside the temple. 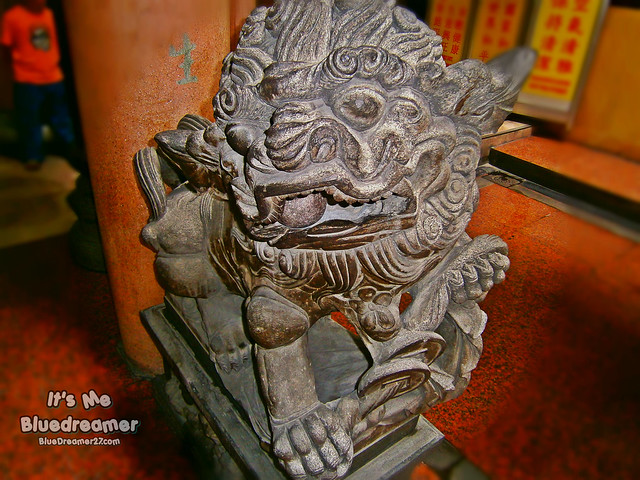 As you enter the building, you will be welcomed by two of these stone lions 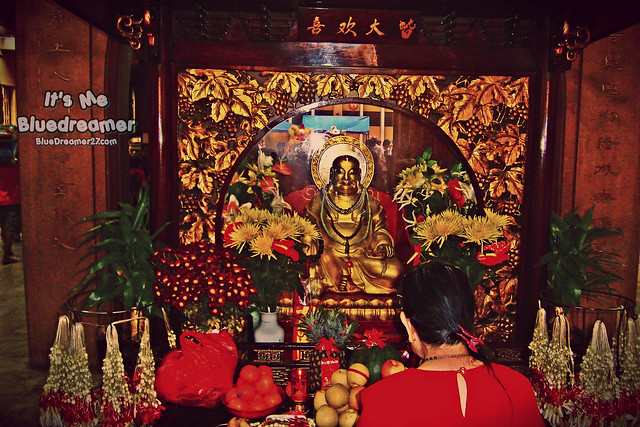 and also this golden Buddha on the center. People offers fruits, flowers, incense and more and place it in front of the shrine.

•Point of clarification, not all images in the Temple are called Buddha, they are called deities or bodhisattva, similar to Catholic saints. They are there for specific reasons one is for protection, wealth etc. 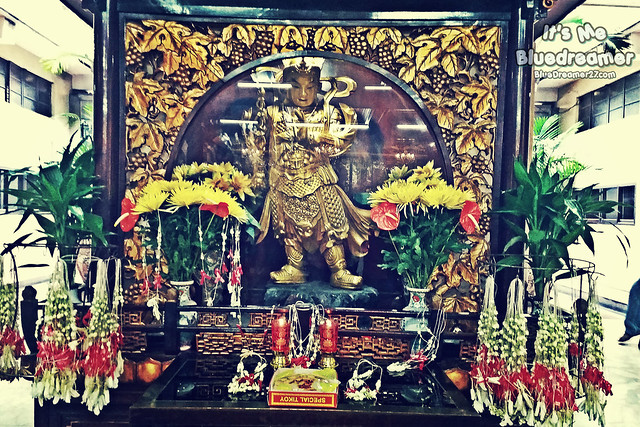 Here’s another image of a deity on the other side! 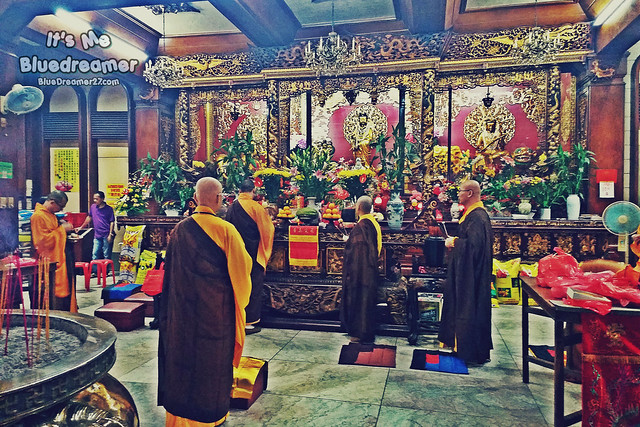 Again, you we are greeted by a huge crowd (mostly Chinese) and we are lucky enough to witness a ritual done by a group of Monks (I have read an article that these are monks from Taiwan) 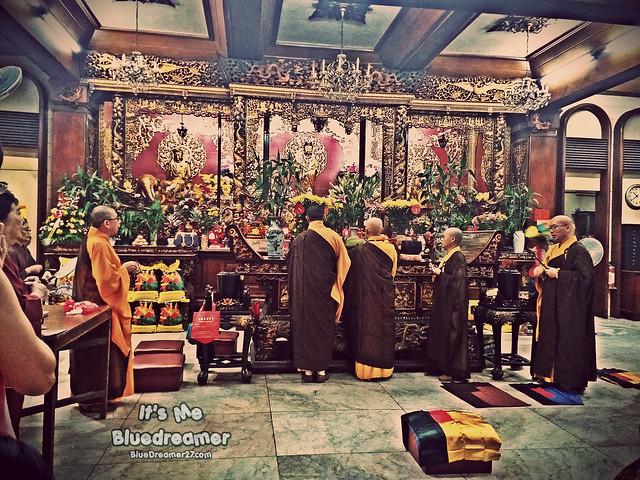 I’m not sure how they called it but this shrine or altar has three golden image of their deities on it. I was really impressed with the details. 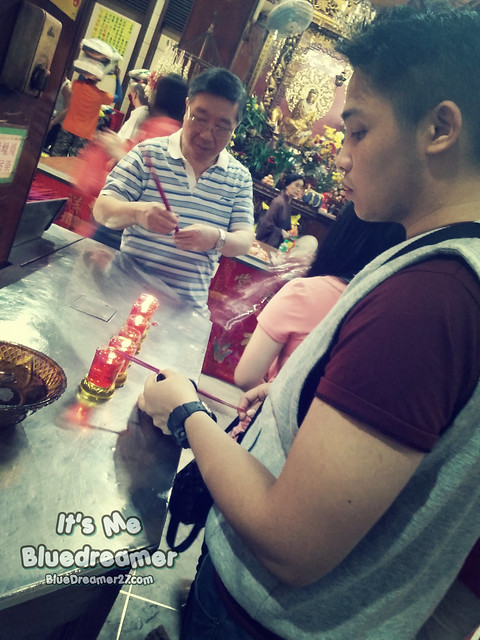 I came across an article on how to pray in a Buddhist temples telling me that you should grab three pieces of incense sticks, light them up and state your prayer or wishes in front of the Buddhas. I’m not sure if that’s really the right way but I have done it anyway ^_^ 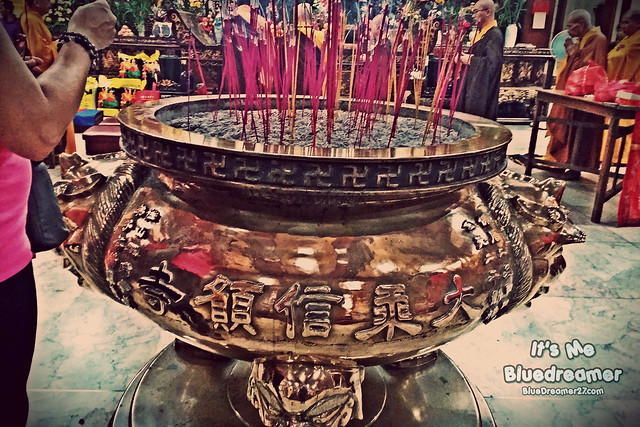 A huge bowl of ashes where you can place the incense sticks. 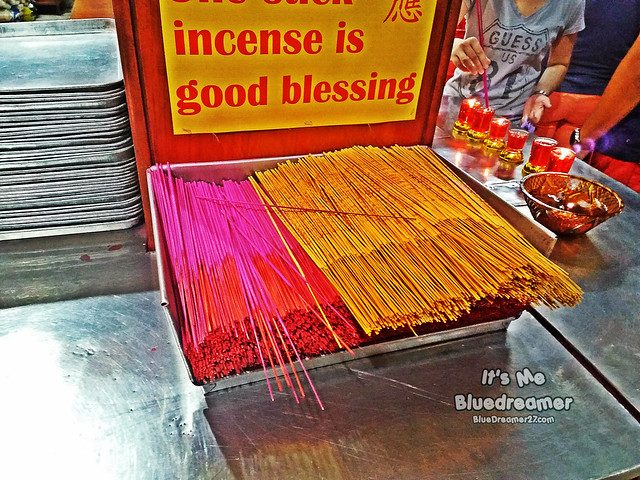 For the incense, yellow is used if a love one dies bellow 3 years and red ones if they have been gone for more than 3 years. That is if you are praying for their soul. If for personal reasons use red or you have to count all the deities in the temple and leave 3 sticks at the main altar and one for each deity. 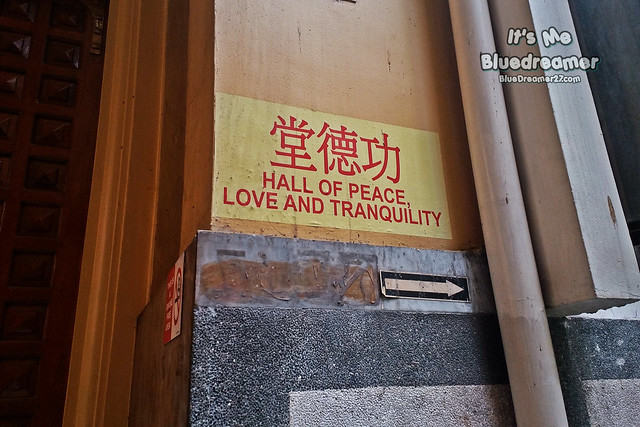 On the left side of the temple you will encounter a huge hall, the Hall of Peace, Love and Tranquility. 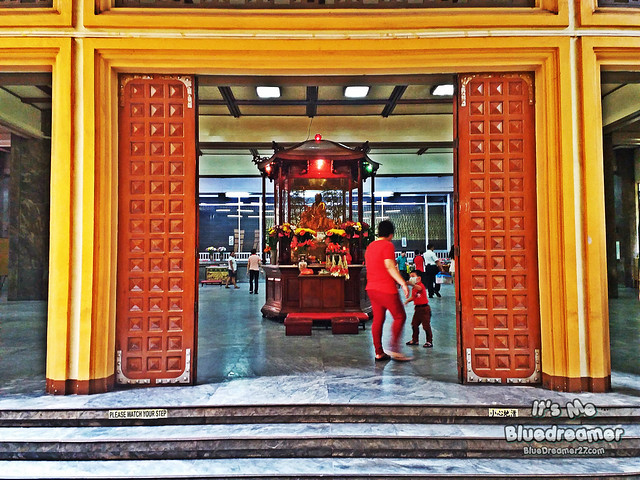 Hall of Peace, Love and Tranquility 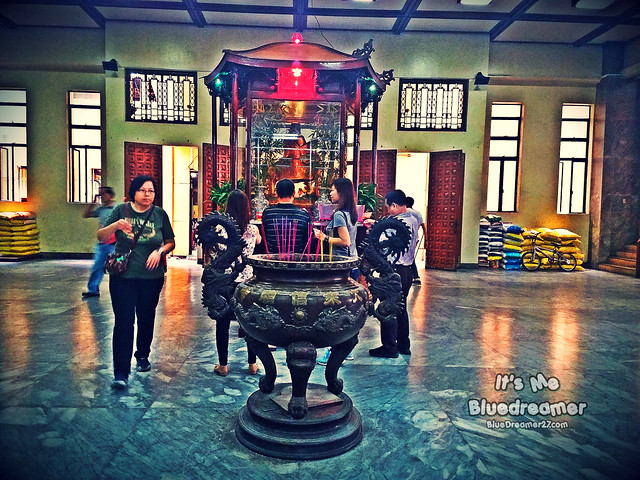 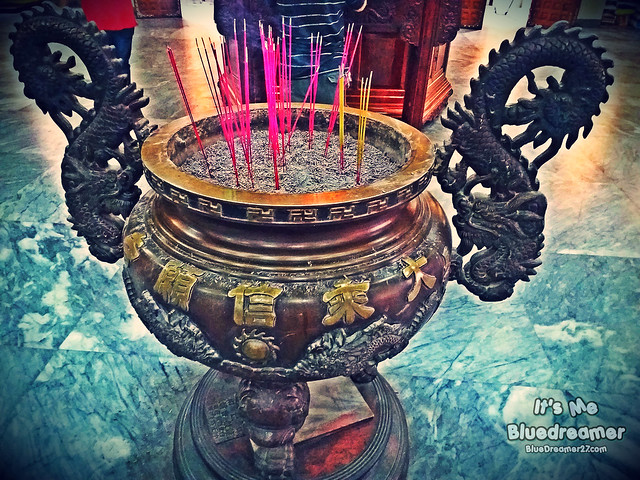 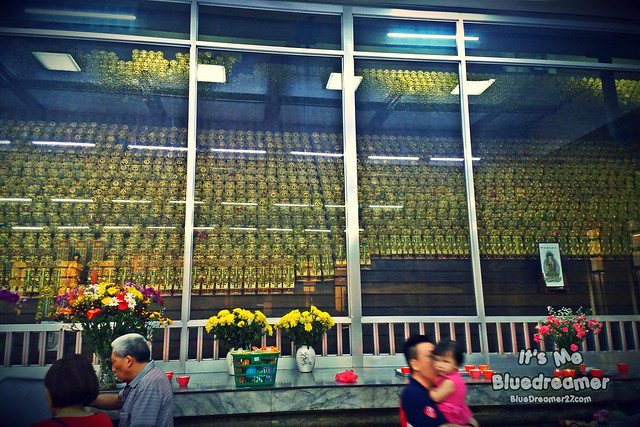 Interestingly, the hall contains huge repository for urns of human ashes. The ashes are placed inside golden container. 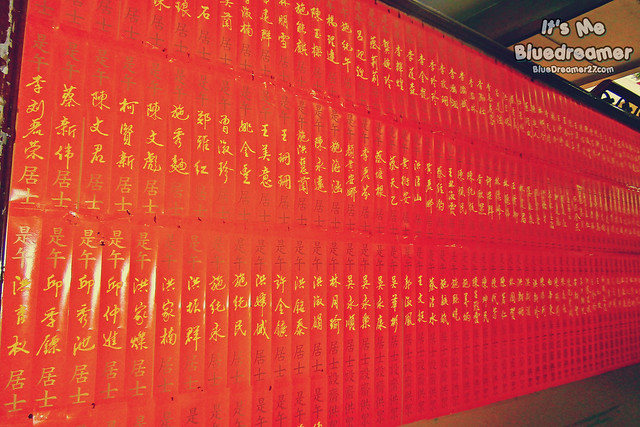 In this area, you’ll find names of devotees who has contributed to the temple past or living

Next Entry : Lion and Dragon Dances in Binondo

•Also I would like to note that visitors as much as possible should refrain themselves from taking pictures inside the temple. It was not my intention to disrespect the temple. This post is made for educational purposes only.

19 thoughts on “A Trip To Binondo : Seng Guan Temple”

We arrived in Cubao from Cavite around 12:30 am in the morning and from there, we waited for our tour coordinator to pick us up. It was almost a 6 hour

Three months ago, my mom and I along with our churchmates went to Bataan for a pilgrimage in observance with the Holy Week. We went there on April 8, just

Here are four of the Marian Images participated in the recently held 35th Intramuros Grand Marian Procession. Our Lady of Loreto known as the Patroness of Aviators, the Protector of