AsiaPop Comicon 2017 is probably one of the biggest and highly anticipated conventions held in our country this year alongside with other big and fascinating conventions held prior to this event including the ToyConPh 2017 and the HistoryCon Manila 2017. AsiaPop Comicon is undeniably the biggest annual comic and pop culture convention in the country today as the event features a powerful line of celebrities (local and international), entertainments guests, comic artists, cosplayers  that generally aims to bring the so-called ultimate fan experience! I have shared you the things that you have probably missed during the Asia Pop Comicon 2017 few weeks ago and now, let us take a deeper insights to this event!

The first thing I noticed about the event is that it features more spacious venue and an overwhelming amount of interactive booths especially the one held by Netflix. If Toycon is for toys, historycon is for entertainment and cosplaymania is for cosplays, AsioPop will focus more into comics and everything in between (let’s not forget Komikon as the pinoy’s comic convention for our local comic artists). Interestingly, AsiaPop has become a platform for our local comic artists to promote their works. We have so many great artists today but it is very unfortunate that the comic industry in our country doesn’t get the same treatment and support compare to other countries.

Good thing a convention like this can help these artistS showcase their work in full extent. 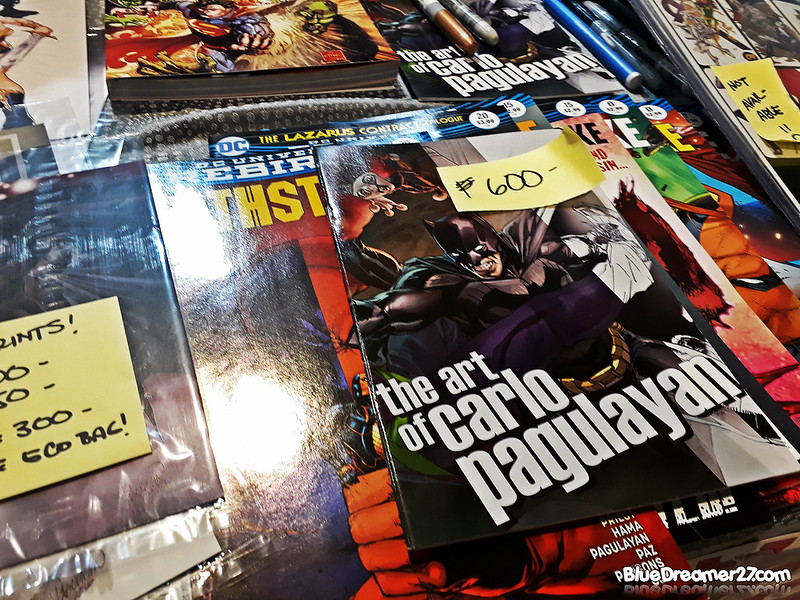 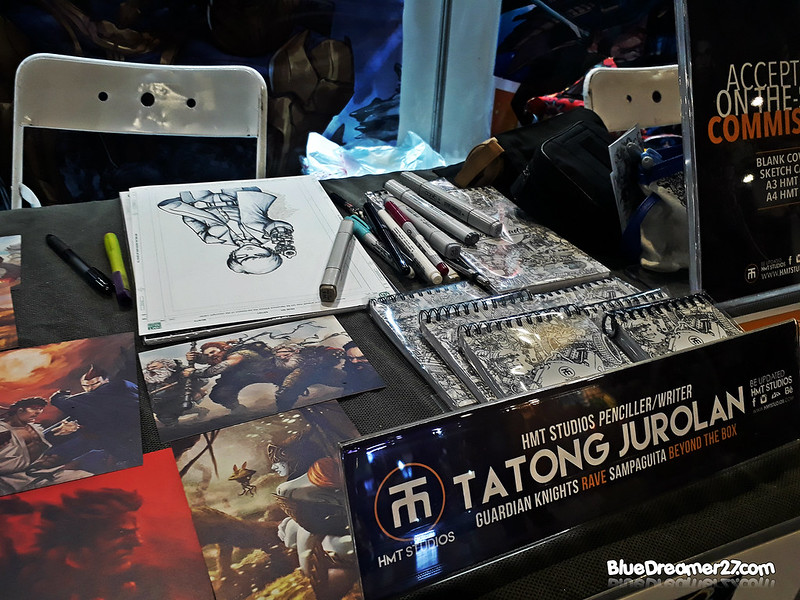 “Tatong Jurolan”
HMT Studio (Home of Multi-Talent Studios) is a company that specializing Game Design, Comics Illustration and other Art related services. They brought one of their great talents Tatong Jurolan, penciler and writer who showcased some of his masterpiece during the APCC 2017. He even made impromptu sketches as what shown from the image above. Tatong Jurolan recently worked with Guardian Knight Comics and Beyond The Box. 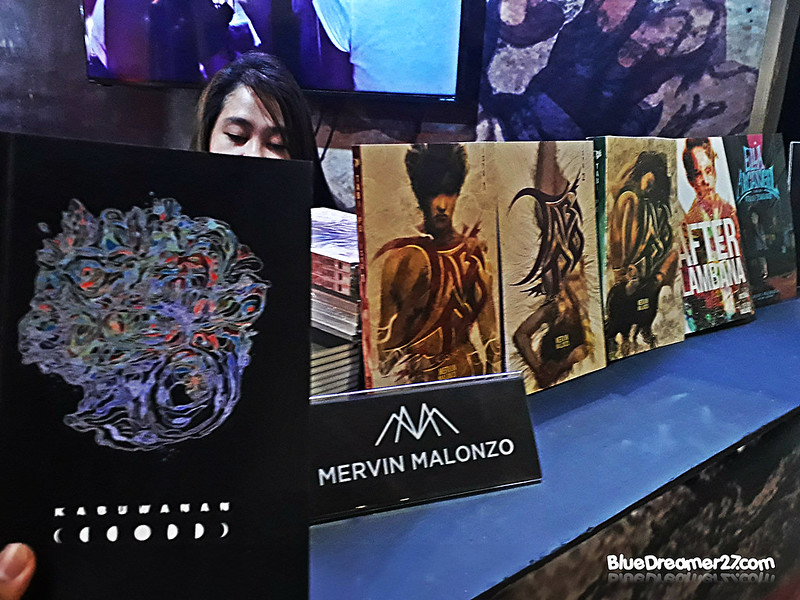 “Mervin Malonzo”
Aside from the eerie booth they showcased as part of the promotion of Tabi Po, a comics of the same name which will be adapted into TV series through Cignal’s Sari Sari Channel, Mervin Malonzo also showcased some of his impressive works such as “The Other Half” and “Ella Arcangel”. They are also promoting this comic compilation from different comic artists entitled “Kabuwanan” including the works from Lizette Daluz, Laraine Gazmen and  Hannah Puyat, Hulyen, Trizha Ko, Kay Aranzanso, Mich Cervantes and Pauline Rana, and Emiliana Kampilan. 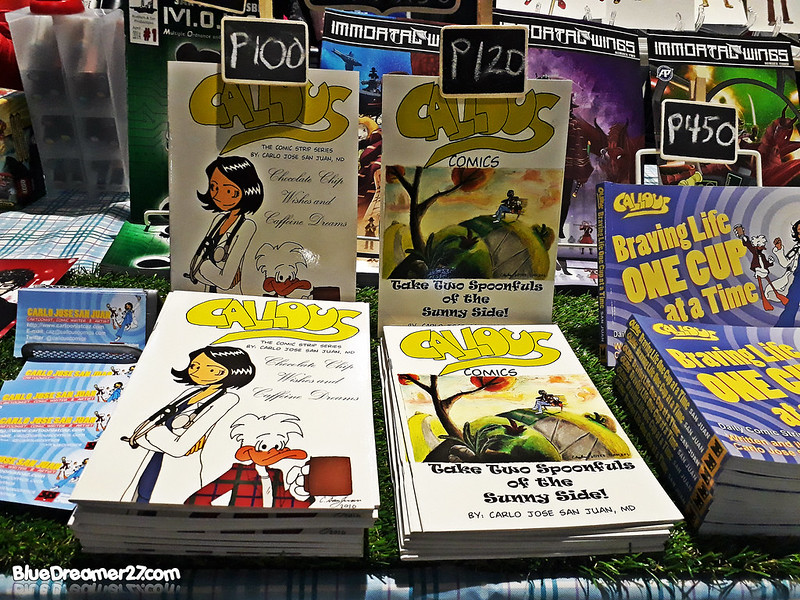 “Callous”
The first time I saw Callous, it instantly reminded me of Archie. Interestingly, Callous is not really new in the business. The history of this comics can be traced back since 1996 where it first appeared as a comic strips in The Lazallian. The comic strips is created by Carlo Jose San Juan. It went on a long hiatus but made a bigger comeback in 2009 where they established their own site and generate a series of comics strips. The comic strips came a long way and has been featured in Manila Bulletin and have grown into a comic series (basically a compilation of their comic strips). Callous features Dr. Rianne Nicah, a struggling new physician, who braves the world with her Guardian Duck ~ Cal Duck. It has grown in many different characters too! 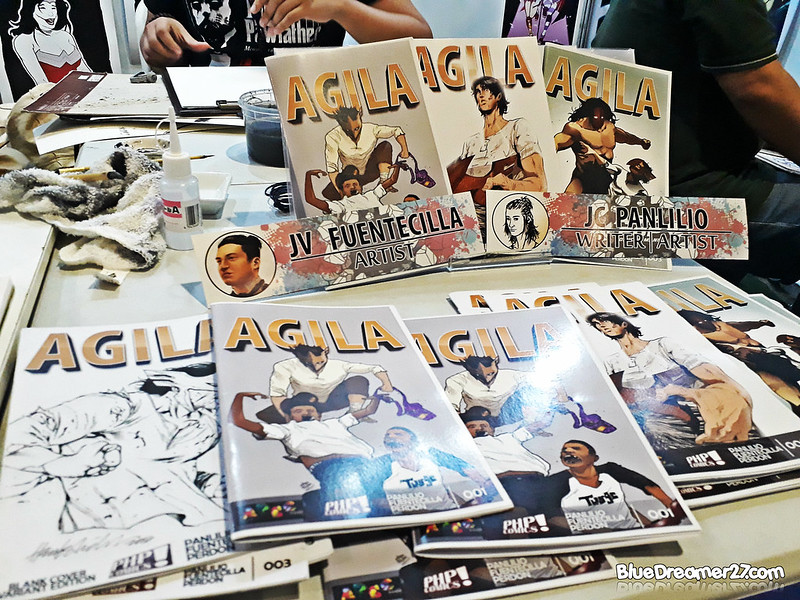 “Agila”
Much like last year, Agila was showcased in the recent APCC. Agila is written by JC Panlilio with visuals from Jose Victor “JV” Fuentecilla and Aljon Perdon. Agila features a very Filipino-inspired character who was actually inspired from JC Panlilio childhood imagination. He was able to visualize this character when he was 17 with an ability to fly, enhanced senses and durability. Agila’s alter ego was a history professor in La Salle. With such interesting and unique storyline, I am hoping that this comics will be adapted either as a movie or as a tv series. 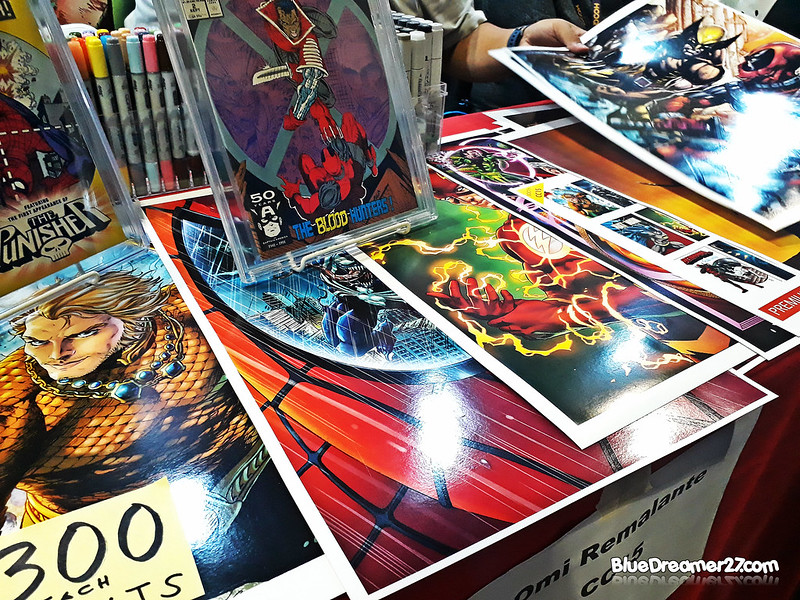 “Omi Remalante”
Another eye catching art works spotted from APCC are the one created by Omi Remalante. Omi Remalante Jr began his comic book career on July 2008 with Capestone Connection, TX where he was the colorist of Borderwall. He has worked with some notable Comics publishers such as Zenoscope (Grim Fairy tales) and Valiant and more! 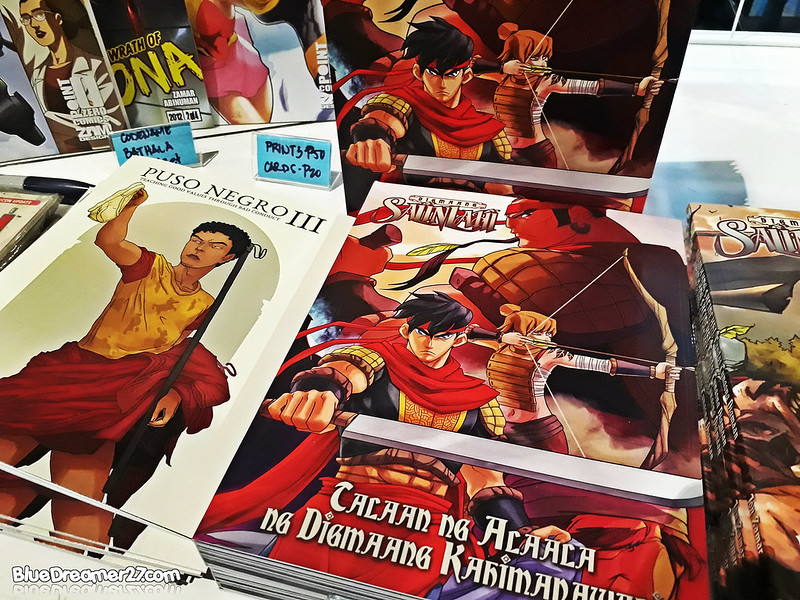 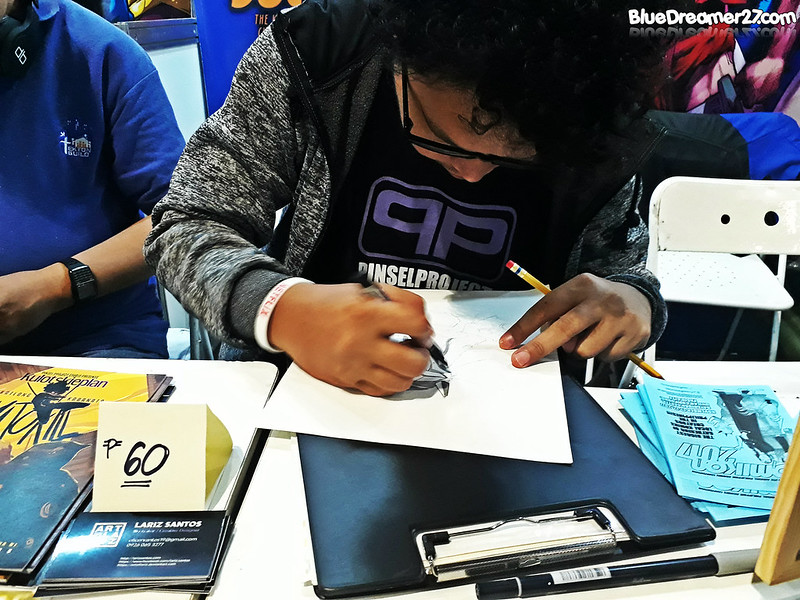 “Lariz Santos”
I actually spotted many artists doing some impromptu sketches during the APCC event. Sulyap Komiks brought some of our talented pinoy artists including Mr Lariz Santos of Pinsel Project Studio. I spotted him doing a sketch of possibly one of his comic characrters. Some of Santos’ notable projects includes “Myth” comic series, KulotskiePlan web comic and some cool illustration designs like “I’m Still Here”and “I Will Still Awake” 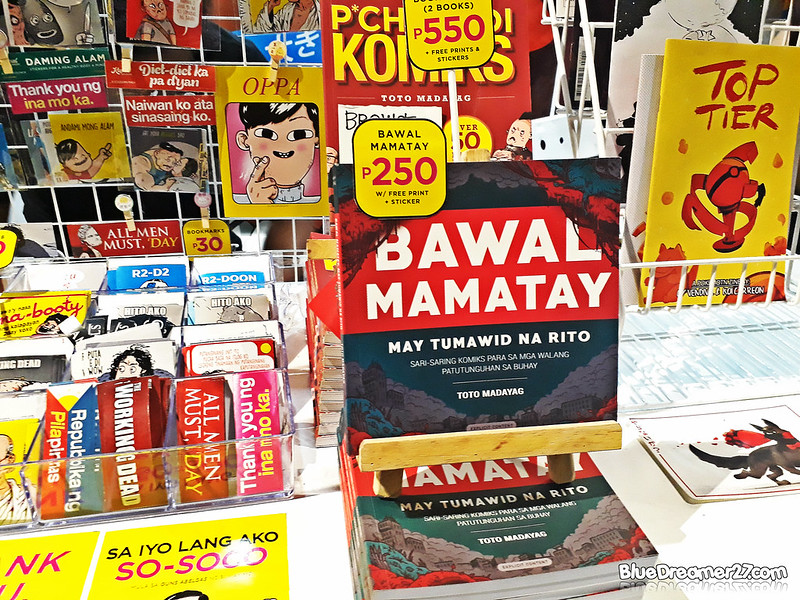 “Toto Madayag”
If you are spending a lot of time in Facebook or possibly reading a lot of FHM Magazines, then you probably came across Toto Madayag’s Libreng Komiks comic strips. His distinctive witty illustration and not to mention the humor that every body can surely relate is the reason behind his success. He was able to publish a number of books like “Bawal Mamatay, May Tumawid Na Rito”, “P’Cha Edi Komiks” and more! 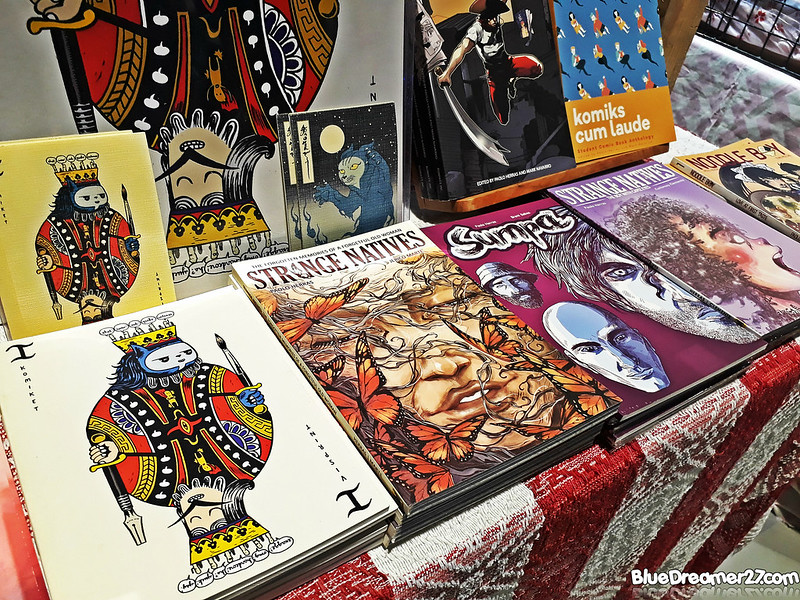 “Paolo Herras”
Much Like last year, film Director and Comic Book Writer Paolo Herras also showcased some of his creations at the recently held AsiaPop Comicon. Some of his notable works shown in the event includes Strange Natives (a series of one-shots featuring strangers in their native land) and Sumpa. Other books from this book that are worth seeing is JP Palabon’s Puso Negro. 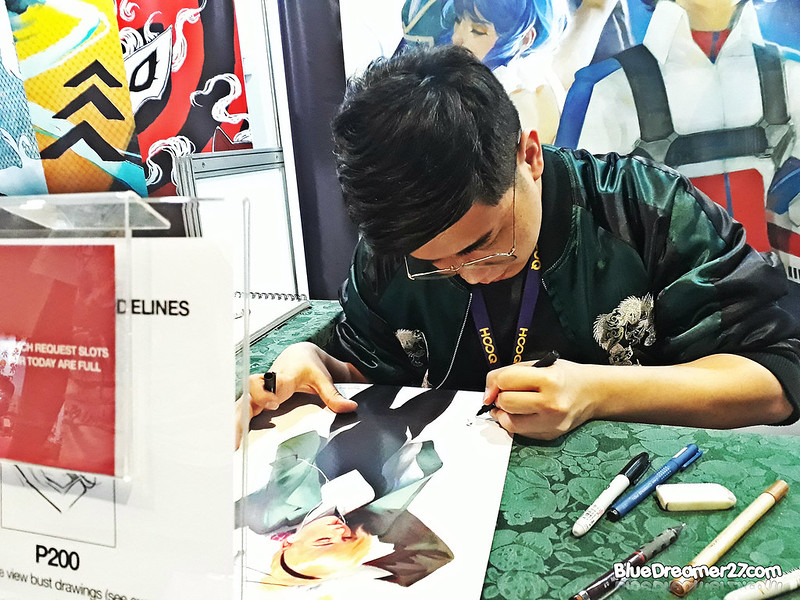 “Miguel Mercado”
A digital illustrator Miguel Mercado is also spotted signing his artworks. That’s the digitally illustrated Gwen Stacy, one of his recent artworks as seen from his ArtStation and DevianArt accounts. I personally appreciate the uniqueness of his artworks. They are just too refreshing with some kind of old-school approach to it.

Filipinos are naturally talented. We have so many great artists today and most of them managed to make it through the international scenes. Although the percentage of readership has dwindled drastically due to the rise of other forms of media and considering that most millennials are more engage with other form of entertainment and embracing the modern technology, the comic industry in the Philippines is still alive and through the annual conventions like AsiaPop Comicon, Manila International Book Fairs, Komikon and more, our pinoy artists finally found a new platform to promote their work and increase their readership.

Sorry for my very late post. Today, I am going to start my Cosplay Mania 2013 post series. The event was held early last month but I didn’t get much

After a quick visit to Kuang Kong Temple, we headed to our last destination before we decided to have our dinner in Sincerity Restaurant and before buying our pasalubongs! We

The holidays are over and it’s making all of us sad! As the busiest and most festive time of the year comes to an end, we’re sure people are back