While attending the cosplay convention (Ozine Fest 2015), I decided to take a quick break by watching Avengers: Age of Ultron alone. It’s just 2 hours and 20 minutes away from the whole day event. Anyway, I am not good in making movie reviews but allow me give it a shot. I am not super geek Avengers fan who have read all the comics from the very beginning but I have read a dozen or two (thanks to Booksale Bookstore which gave me the opportunity to read those old issues). I am personally a big fan of Hawkeye, Scarlet Witch, Black Panther and the Wasp and seeing them all in a big screen is absolutely a dream come true. 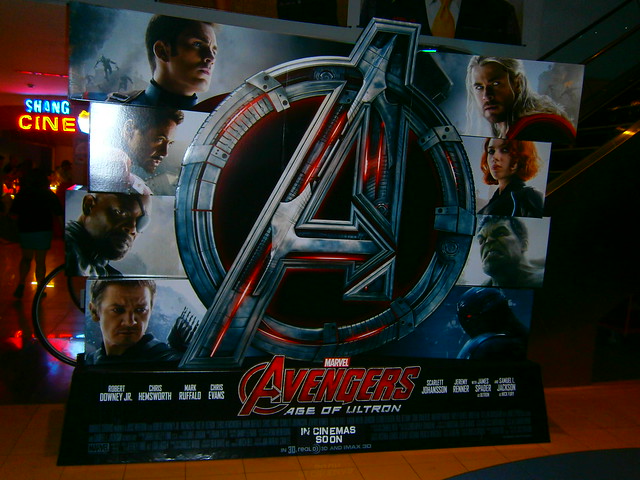 Avengers : Age of Ultron is another ambitious movie that plays a crucial role in Marvel cinematic universe! Joss Whedon probably mastered the formula on how to make their Marvel movies a big hit and that is by blending action, humor and drama perfectly. This movie will give us a laugh, a tear and excitement. The casting was just nothing but superb! At first I thought Elizabeth Olsen is not really perfect for the role as Scarlet Witch but she’s surprisingly not disappointing at all. She may not have that hot sexy costume I desired for her to wear but she was able to deliver the role satisfyingly and the moment she stood up and fight along with the Avengers, is just one of the most stunning moments in the movie.

Fight scenes are absolutely flawless and the movie offers a lot of epic and unforgettable battle including the opening sequence, the epic Hulkbuster and Hulk fight scene and more. If this movie is going to be all about action and fighting, explosion and destruction, it might end up being so boring. Thanks God they offer some comedy sketches for us to enjoy! If you think that Hulk smashing Loki from first Avengers is the funniest, then you better watch this movie because there are so many moments here that will surely make you laugh!

As far as the emotional part of this movie, some people might think that it is not serious enough but this film will actually feature our sueperheroes’ downfalls. When Scarlet manipulated their minds using her skill, that is the time when our superheroes fears and back story was briefly revealed. I personally think that Black Widow’s untold past was interesting enough for us to think that she could have her own film too! Did I also forgot to mention that Vision is here? He plays a very crucial role in this film!

Overall, Avengers: Age of Ultron is perfect mix of action, humor and drama! It may not be as better as the first movie in some aspects but this film has a stronger action sequences and more thematically unified. It is definitely a movie that you should not miss!

We only have few weeks left before the much awaited American Idol Season 2 Finale. Wow, time really run out so fast and it seems that it was just yesterday

AsiaPop Comicon 2017 brought in two big stars this year. The first one is Tyler Hoechlin who played Superman in the second season of Supergirl amd Ray Fisher who will

A movie that will surely uplift you and will tell you the real meaning of beauty and unconditional love! After his critically acclaimed performance in the 2015 movie Room, Jacob