Being Part Of Drum And Bugle Corps

When I was in elementary, I’ve always wanted to be part of our Drum and Lyre team but ended up being part of our School Choir. Yes, a school choir yet I don’t really sing well. I remember performing in front of many crowds because we had too since we’re always part of almost all the programs we had in our school. Good thing, i didn’t pursue that in high school, otherwise it will be a shame but my intention to be a part of Drum and Lyre or even Drum and Bugle remains the same. Honestly, I don’t know how to play any instruments (brass or percussion) but I am willing to be trained because I really find them so amusing. 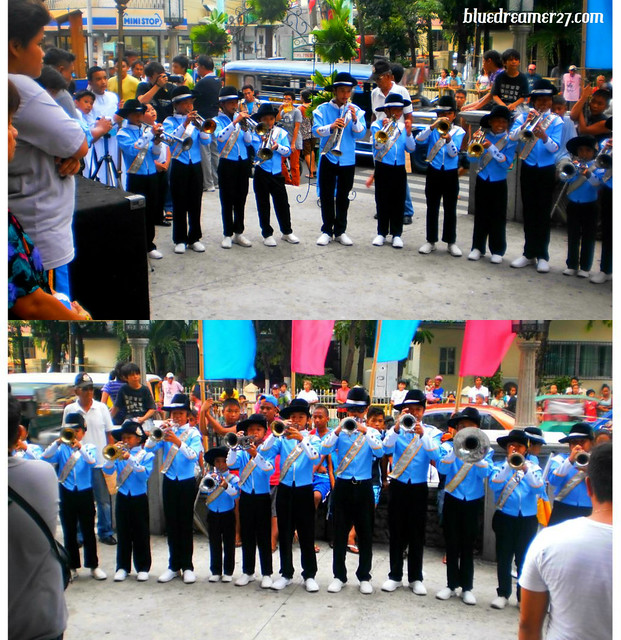 Drum and Bugle Corp serenading the participants of Santa Cruzan

With their colorful costumes, synchronized march and of course awesome performances, who wouldn’t be so entertained when you see this group marching on the street? Each marching unit has their own gimmick to please the crowd. A Drum and Bugle corp marching unit usually consist of marching brass instruments such as baritone, tuba, euphonium, French horns and Bach trumpets. A marching unit also includes percussion instruments including snare drums, tenor drums, bass drums and cymbals. To make the marching band more entertaining, they are also accompanied by color guards who performs a choreographed moves using their own equipment such as flags, mock rifles and more. They also include majorettes.

As for the music, they often do jazz, new age, classical, and rock music but modern Drum and Bugle Corp used to adapt modern music as well and provide their very own interpretation to it using their marching instruments.
Here’s Makati City Lancers Drum and Bugle Corps playing Adele’s Rolling in the Deep!

4 thoughts on “Being Part Of Drum And Bugle Corps”

Are bass players always under appreciated? Just because you can barely hear them in a band doesn’t mean they are not really important. In fact, bass players are considered as

I was watching American Idol last night.Well,  I have missed their  previous episodes that’s why i was so surprised to see that Thia Megia is still in the competition. I

The grammy award winning group of U2 320 will be having a concert here in Manila. It is set on September 24 at SM Mall of Asia Concert grounds. I