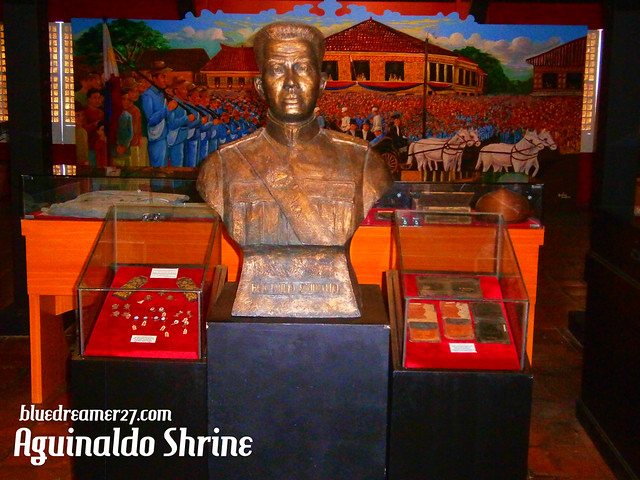 After spending time with Aguinaldo Park, we decided to enter the mansion. It is very interesting to note that the Entrance here is FREE. There is no charge at all and you just have to sign in your names in the outposts located on the main gate. I was looking for a donation box either but I cannot find any. Like I said, this is more like the NEW Aguinaldo Shrine. It underwent renovation since September and they just opened last March and the inauguration of this newly renovated mansion was led by President Benigno Aquino III. 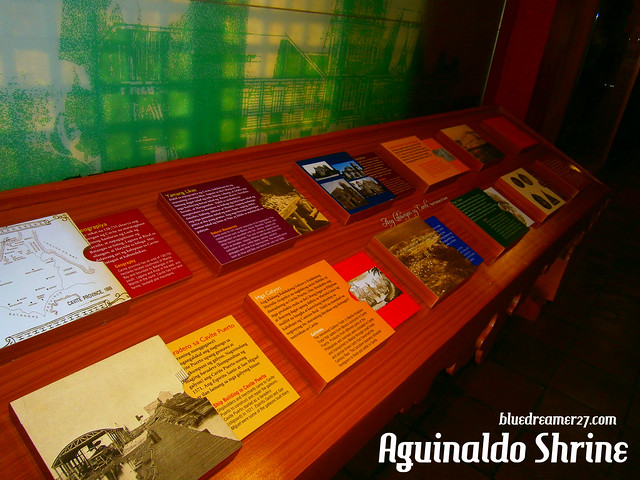 (Some historical facts) We are warmly welcomed by the tour guide named “Boulevard”. Well, I thought I didn’t catch his name correctly but I addressed him several times in that name and never corrected me or anything so yeah he’s Manong Boulevard. I think his age is more like in 70 and yet still strong and very articulate in everything he showed us. 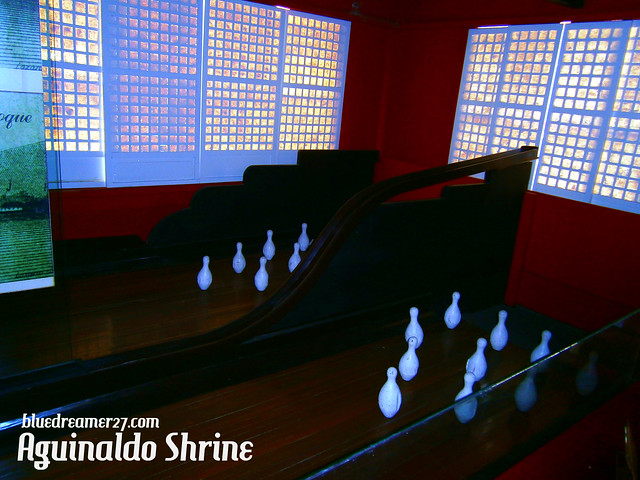 A bowling Alley inside the mansion. The first floor of the mansion was transformed into a museum, displaying all the memorabilia of the late president. If you have been here before, the first thing that you will notice aside from the rearrangement of the items is that it is now fully air-conditioned. 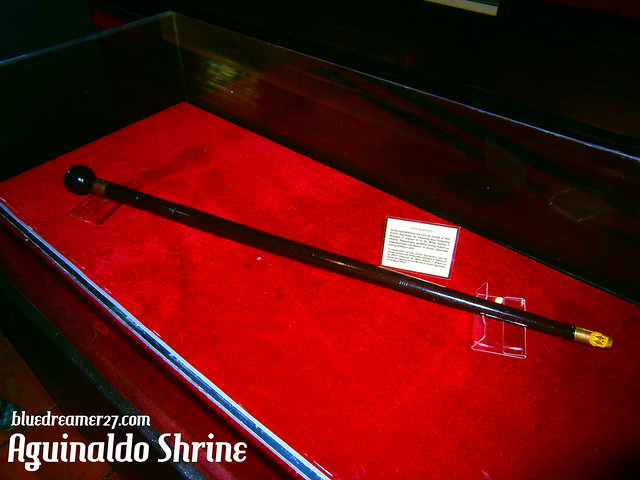 The Vara De Mano (Ceremonial Mace). Ceremonial Mace is a highly ornamented staff of metal or wood was carried before a high official in civic ceremonies intended to represent official’s authority. The reproduction of Emilio Aguinaldo’s Vara De Mano was turned over to PNoy by NHCP Chairman DR Maria Serena Diokno to signal the opening of the Museo Ni Emilio Aguinaldo on March 20, 2015. 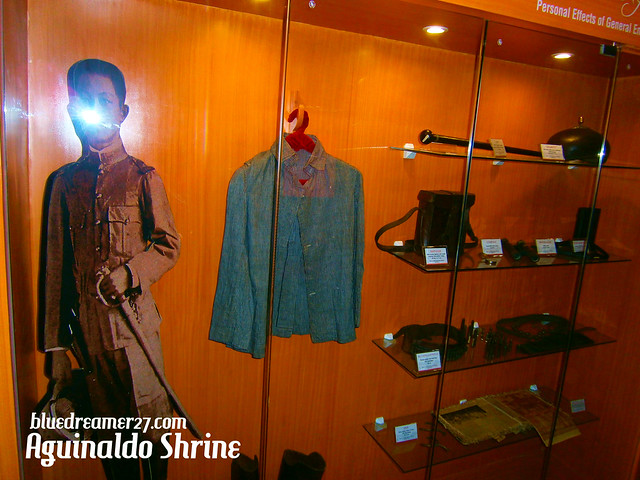 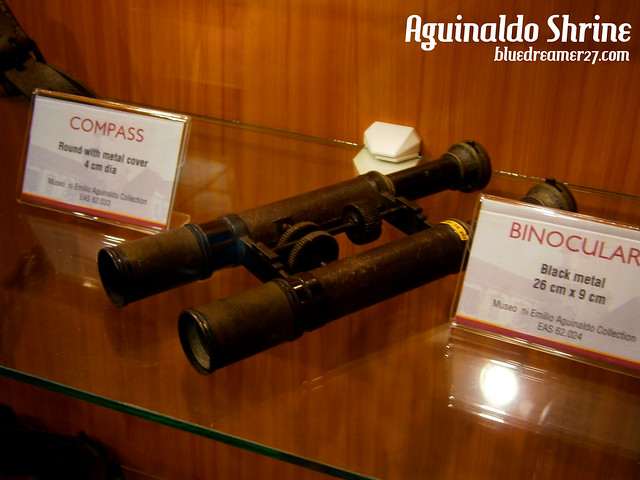 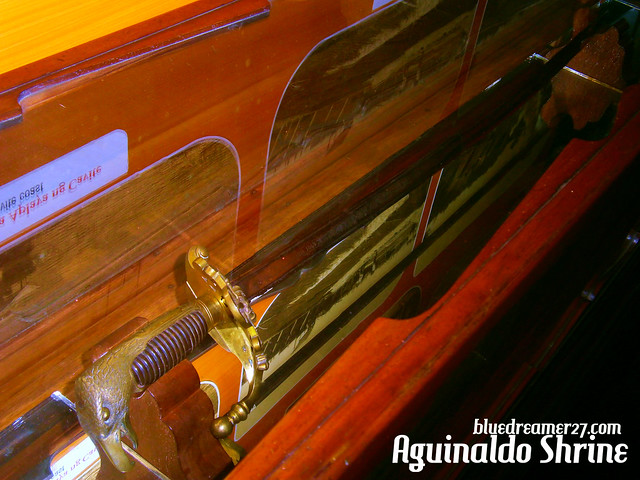 This is an old sword owned by the President after being acquired from Gen. Aguirre in 1986. It was designed by Gen. Ignacio Pawa and was forged here in Cavite. Aguinaldo was a pure Caviteño! He was born in Kawit (previously known as Cavite el Viejo) on March 22, 1869. 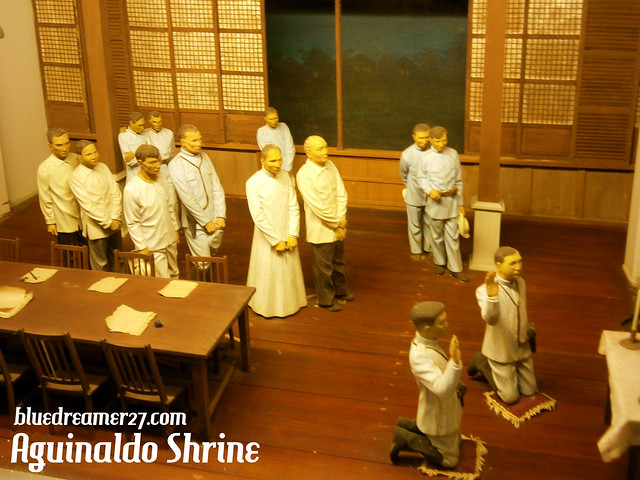 A diorama showing the Oath Taking in Tanza. This event took place on March 23, 1897. 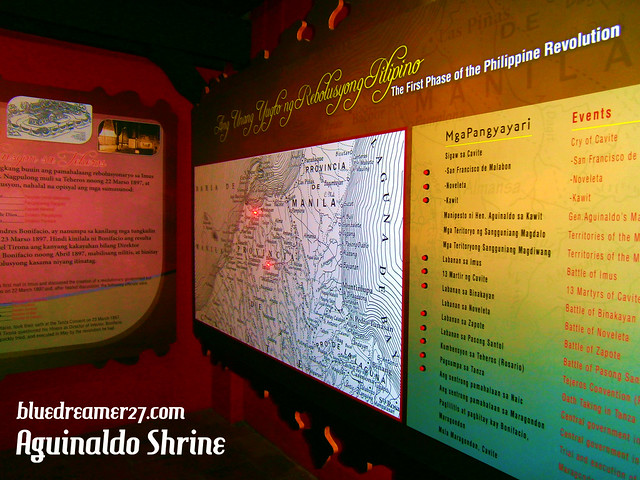 This is one of the most interesting addition to the museum. It is a high tech way to identify the historical events connected to the first phase of Philippine Revolution and where exactly they took place. The list of events were written on the side of the map with buttons that you can click so it will light up on the map. 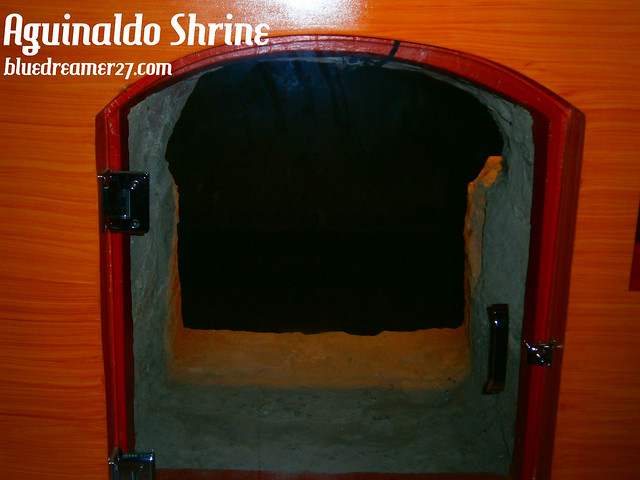 Here’s an interesting fact, the mansion hides a lot of secrets. There are secret compartments everywhere where items can be hid and there are tunnels that will take you to other nearby places in Kawit. This concrete tunnel will actually lead you to Saint Mary Magdalene Church. The tunnel, however, is no longer accessible on both ends as it is already filled with water. 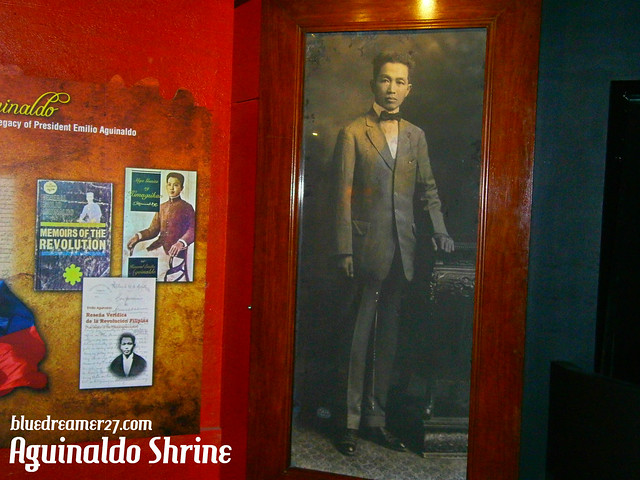 A life-sized portrait of the president. Yes, that is already a life size! Emilio Aguinaldo’s height is only 4″11 same with Joze Rizal. 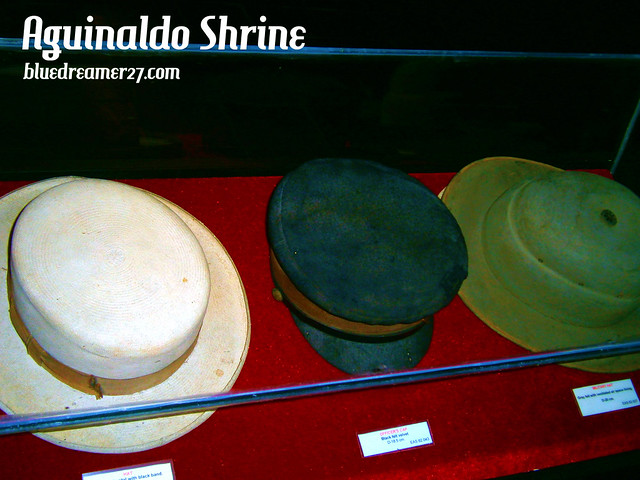 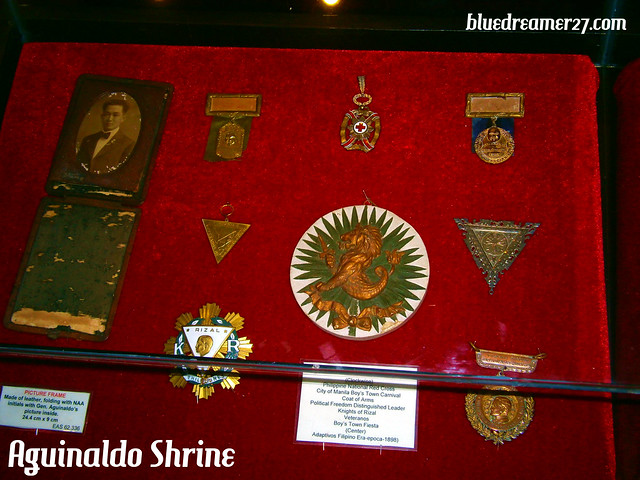 Medals and Badges of the President 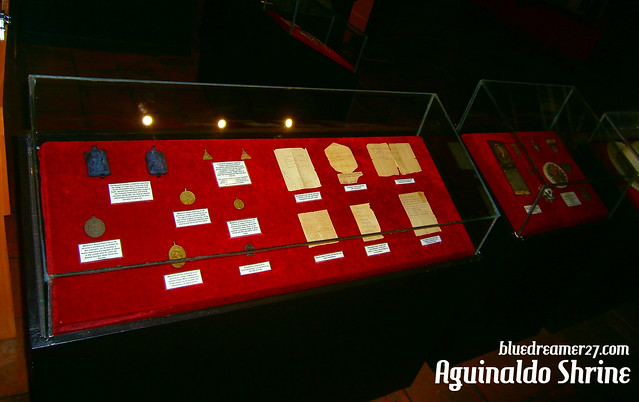 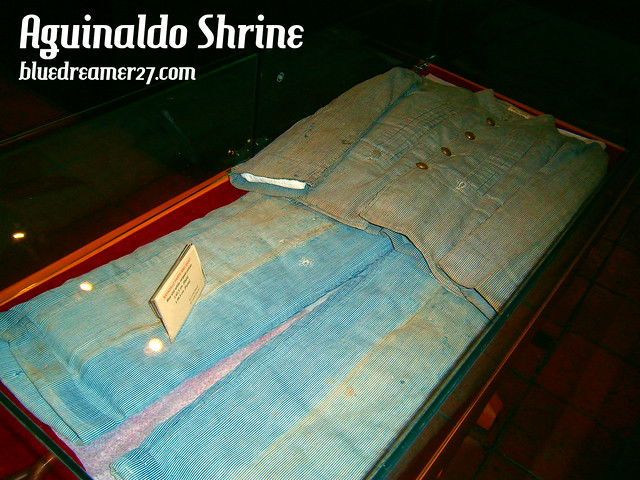 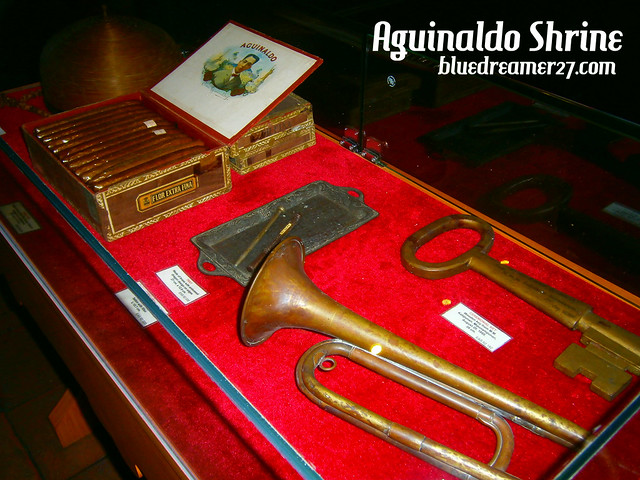 Ceremonial Key, Old Trumpet and a box of unused Tobaccos 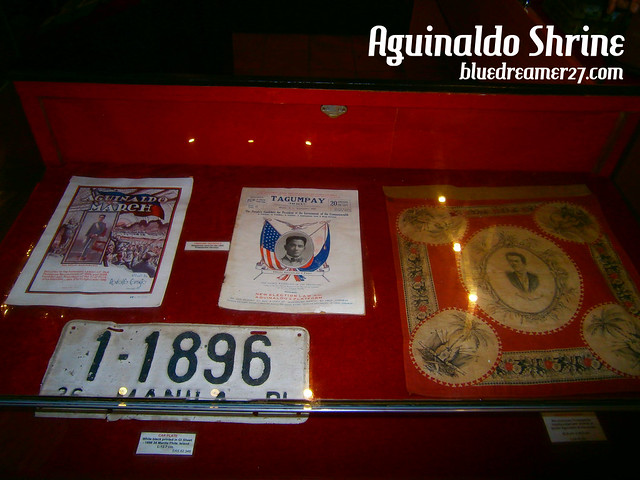 Campaign Materials and Car Plate. Not sure if the Car plate belongs to Aguinaldo’s 1924 Packard Limousine though. Speaking of which, the Packard is no longer here. According to Manong Boulevard, the car was now transferred to PICC. 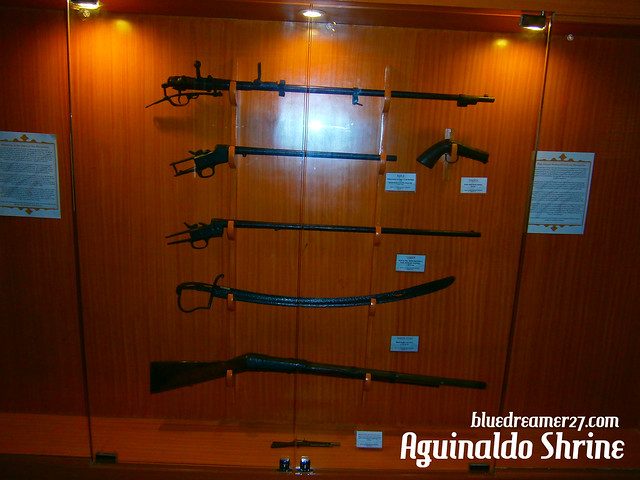 Weaponry used during the revolution

The huge painting at the back is a new addition to the musuem. The tour guide mentioned something about Barasoain so this must be the Inauguration of the 1899 Philippine Republic in Malolos, Bulacan which took place after the declaration of Independence Day. 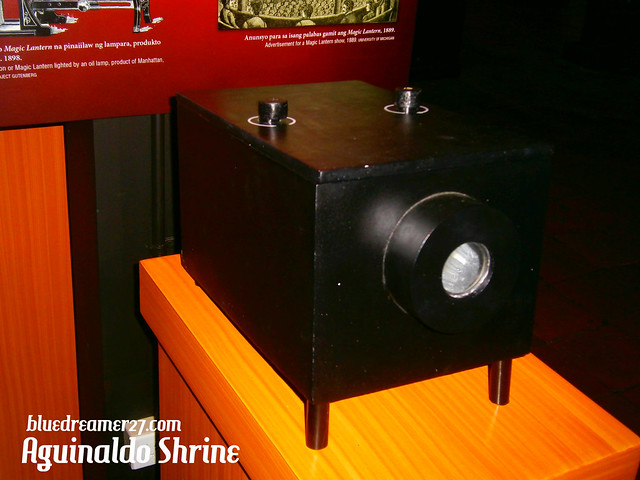 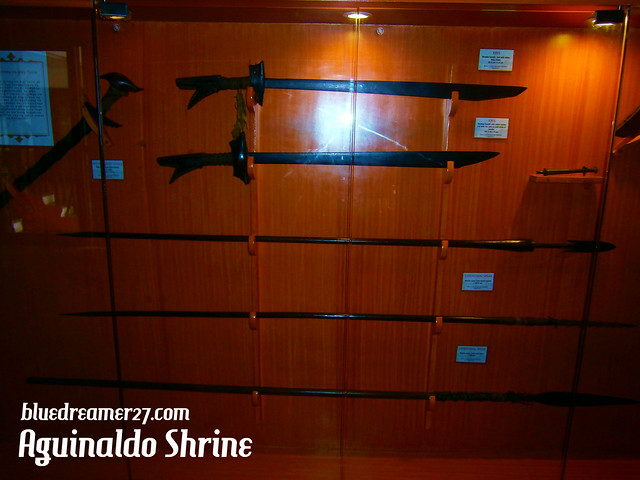 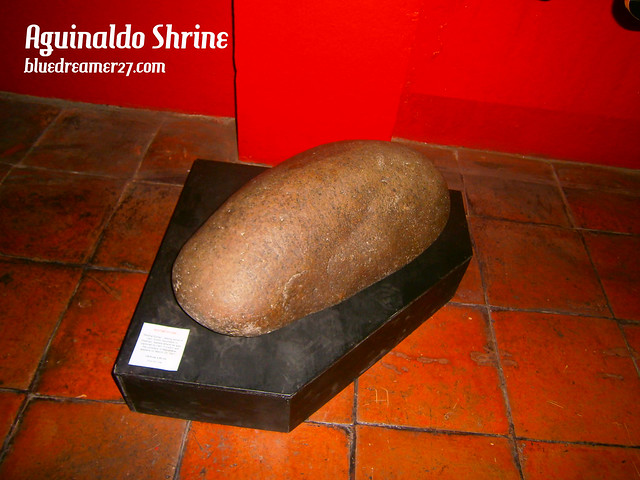 This may seem like a normal boulder of stone but who would have thought that it plays a huge role in history? According to our tour guide, Emilio Aguinaldo used to rest here each time he went from a battle. After touring us in the museum, Manong Boulevard showed us the way to the second floor. It seems like he is just responsible for the first floor so we thanked him for his service. We really appreciate the warm welcome.  The second floor is my favorite part!

Before attending the concelebrated mass in Saint Mary Magdalene Parish for the Feast of the Mary Magdalene, I already made an inquiry to admin of their official Facebook page regarding

After spending some time with the Shrine of Caysasay and touring the miraculous Well of Saint Lucy, we headed down to the town of Balayan Batangas. It’s starting to get