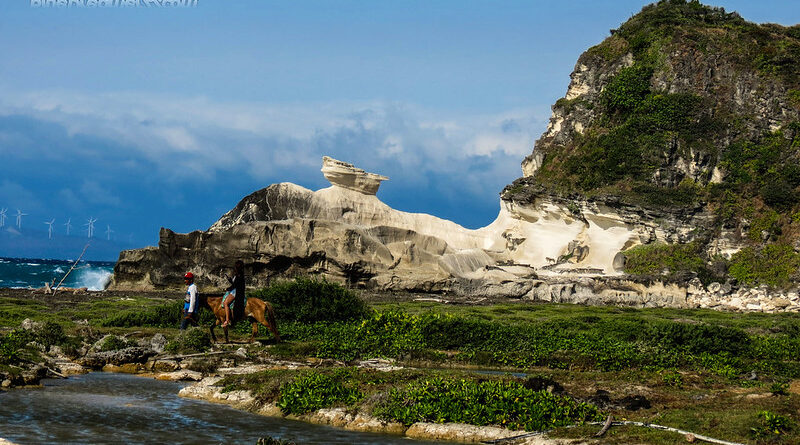 After visiting the Cape Bojeador Lighthouse (Check : Cape Bojeador Lighthouse), we went over to another popular attraction in Burgos. It turns out, Ilocos is not just popular with their heritage houses and cobblestone streets, the region is also known for some amazing rock formation and most notably the Kapurpurawan! The Kapurpurawan Rock Formation is possibly one of the most visited destinations in Ilocos Norte due to its distinctive appearance. The term Kapurpurawan is derived from the root word “Puraw” which means “white” in Ilocano. 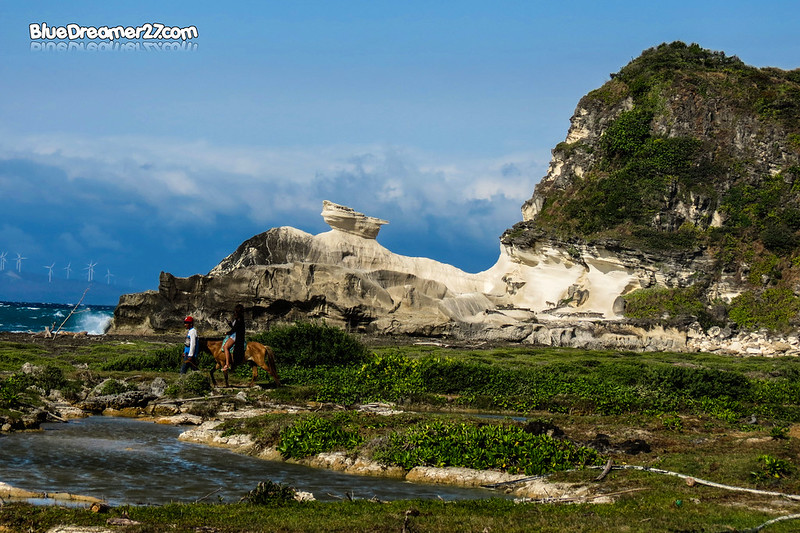 The creamy white rock formation is the most interesting highlights of this place. It was naturally sculpted by nature. However, since the formation is starting to show some signs of erosion, they are no longer allowing the place to be crowded. Instead, they designated an area where visitors can get a better view of the rock formation. 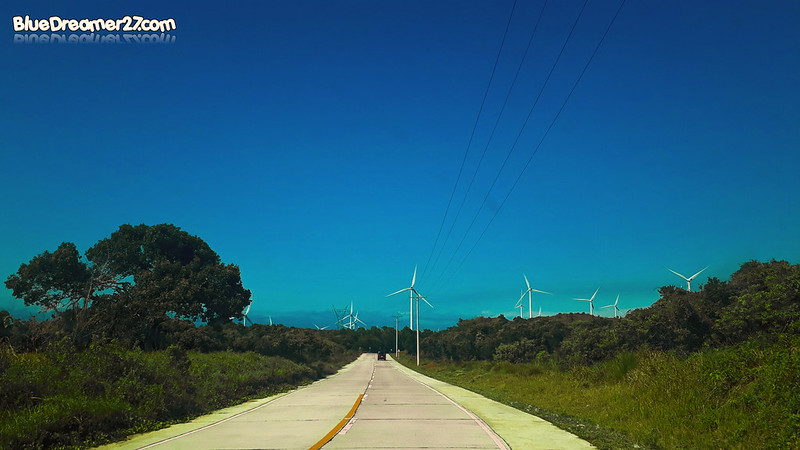 We were expecting to see the windmills in Bangui but surprisingly, we were welcomed by a windfarm even before we reached the Kapurpurawan. There is an overwhelming amount of windmills scattered from one place to another. Unlike those in Bangui, the windmills here are not straightly aligned and they are not located near the shore either which reminds me of the windfarm in Pililla Rizal (Check : Pililla Windfarm). 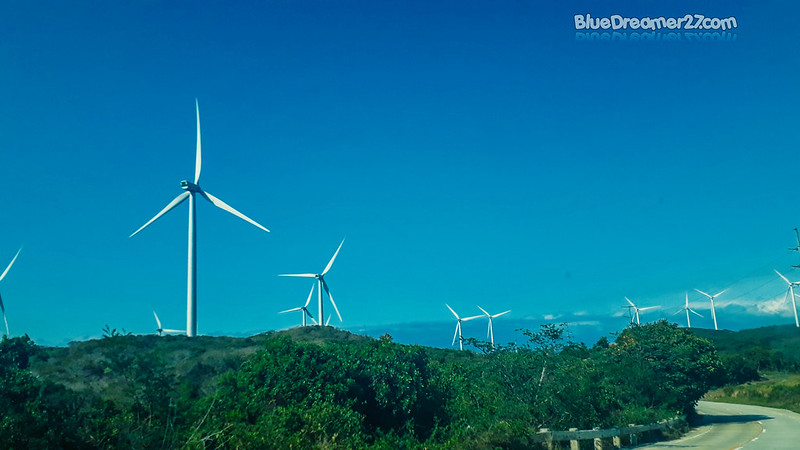 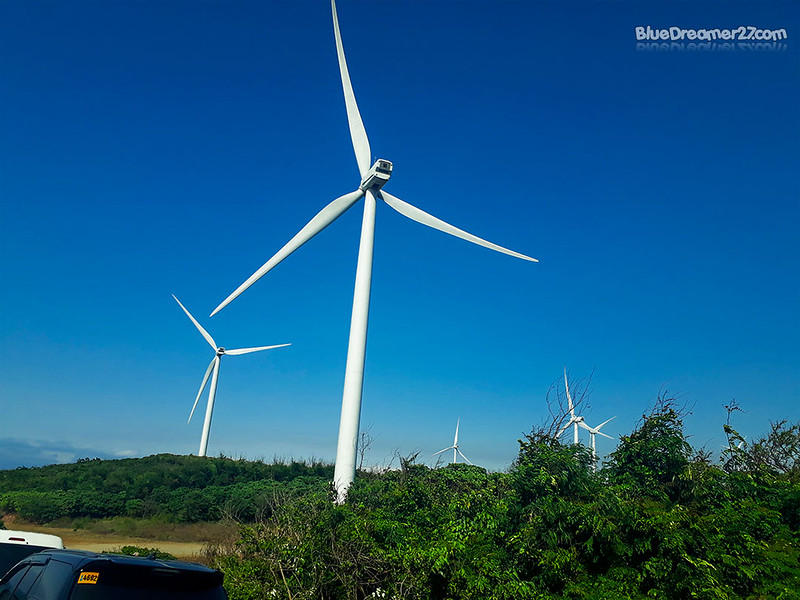 The ones in Pililla are bigger but then, seeing these windmills up close will always put you in awe. Each windmill is about 230 feet tall which is already equivalent to a size of a building. Each blade stretches up to 135 foot long while each turbine is capable of producing 1.65 megawatts of electricity. Combining all the fifty operational turbines, this energy is enough to power million of houses. This also made me realized that renewable energy has a huge potential in our country. 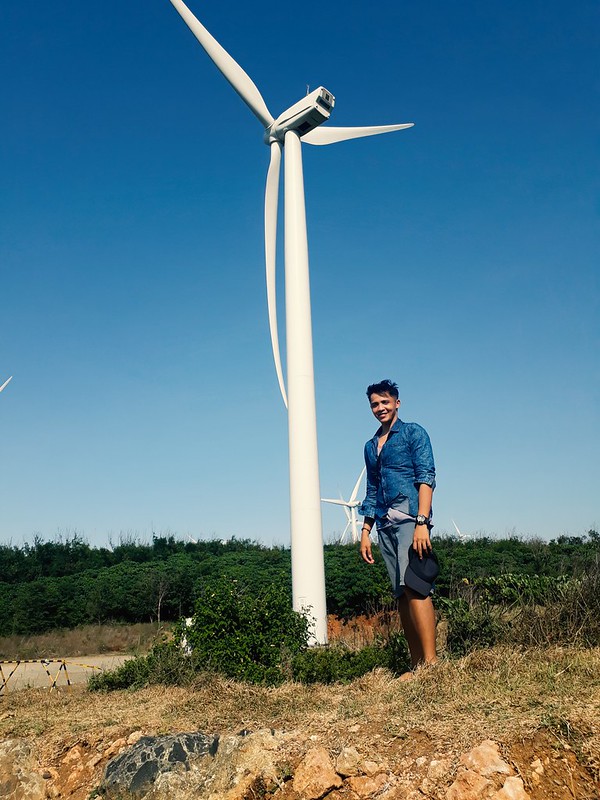 Other than marveling its beauty, there’s nothing really much to do in Burgos Windfarm other than taking great photos. It’s free after all and you can take as many photos as you want. It is also advisable to bring something to protect you from the heat. You might have to bear with the scourging heat of the sun. Bring caps, hats or umbrella and make sure to apply sunblock. 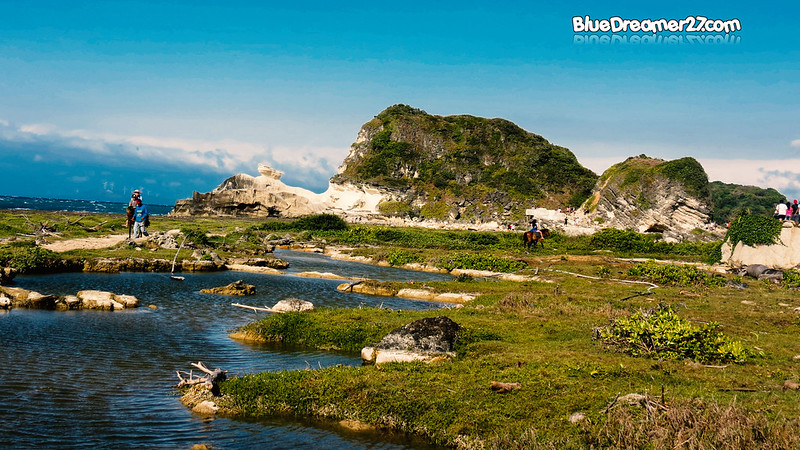 Just few walks away from the wind farm, you will reach some souvenir shops and also the entrance to the Kapurpurawan Rock formation. You can climb down a series of steps to reach the lower ground. There is actually no entrance fee if you will just  explore around the Kapurpurawan. As you can see from the image above, that is the nearest area you can explore for free haha. You can get a better view of the Kapurpurawan by heading to another entrance (see the group of people on the right side of the photo). Here, you have to sign up and pay a minimal entrance fee of Php15. 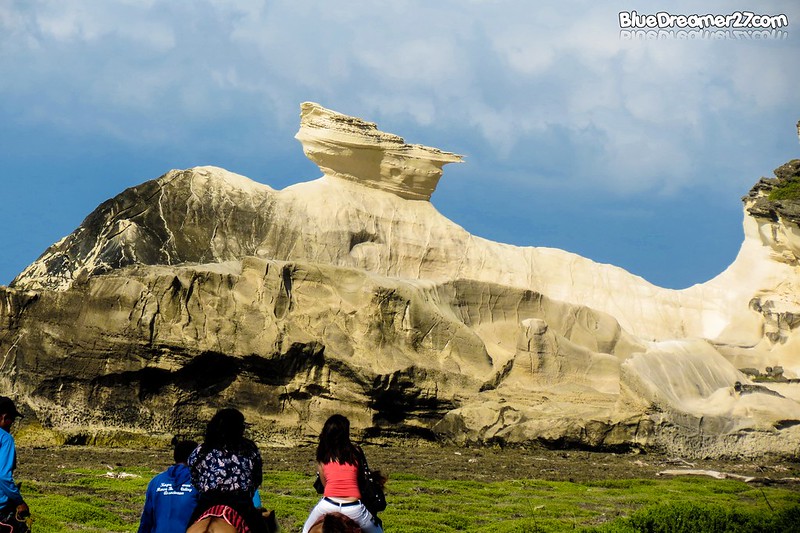 I took advantage of my Camera lens here! Another way to get a closer view of the Kapurpurawan is through Horseride. You can pay 100php for a horseride and they will guide you around the rock formation. You can also have the opportunity to view the stunning rock up close. 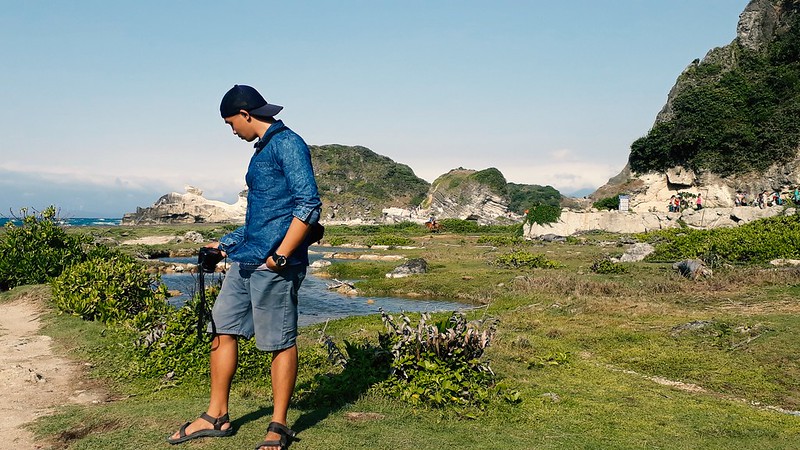 Another advantage of the horseback riding is the chance to see a statue of Biag Ni Lam-ang, a famous Ilocano Epic Poem. 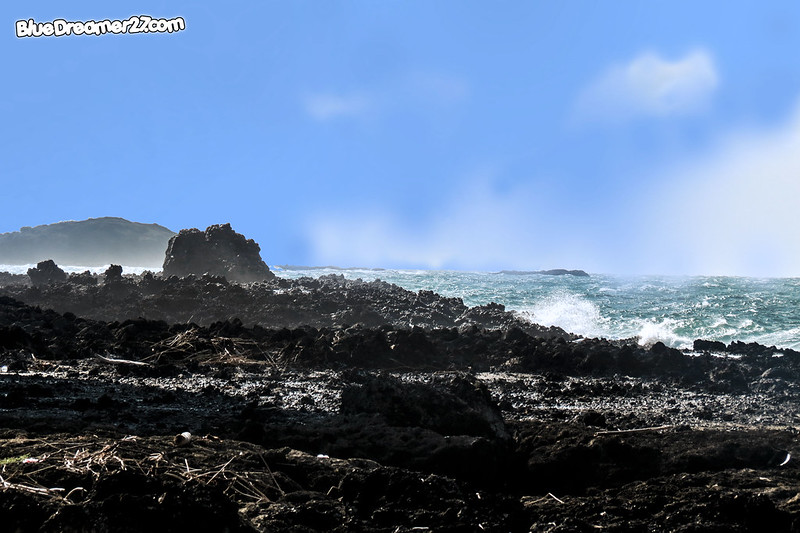 On the other side, you’ll see a rocky shore that clashes with huge waves from the West Philippine Sea. 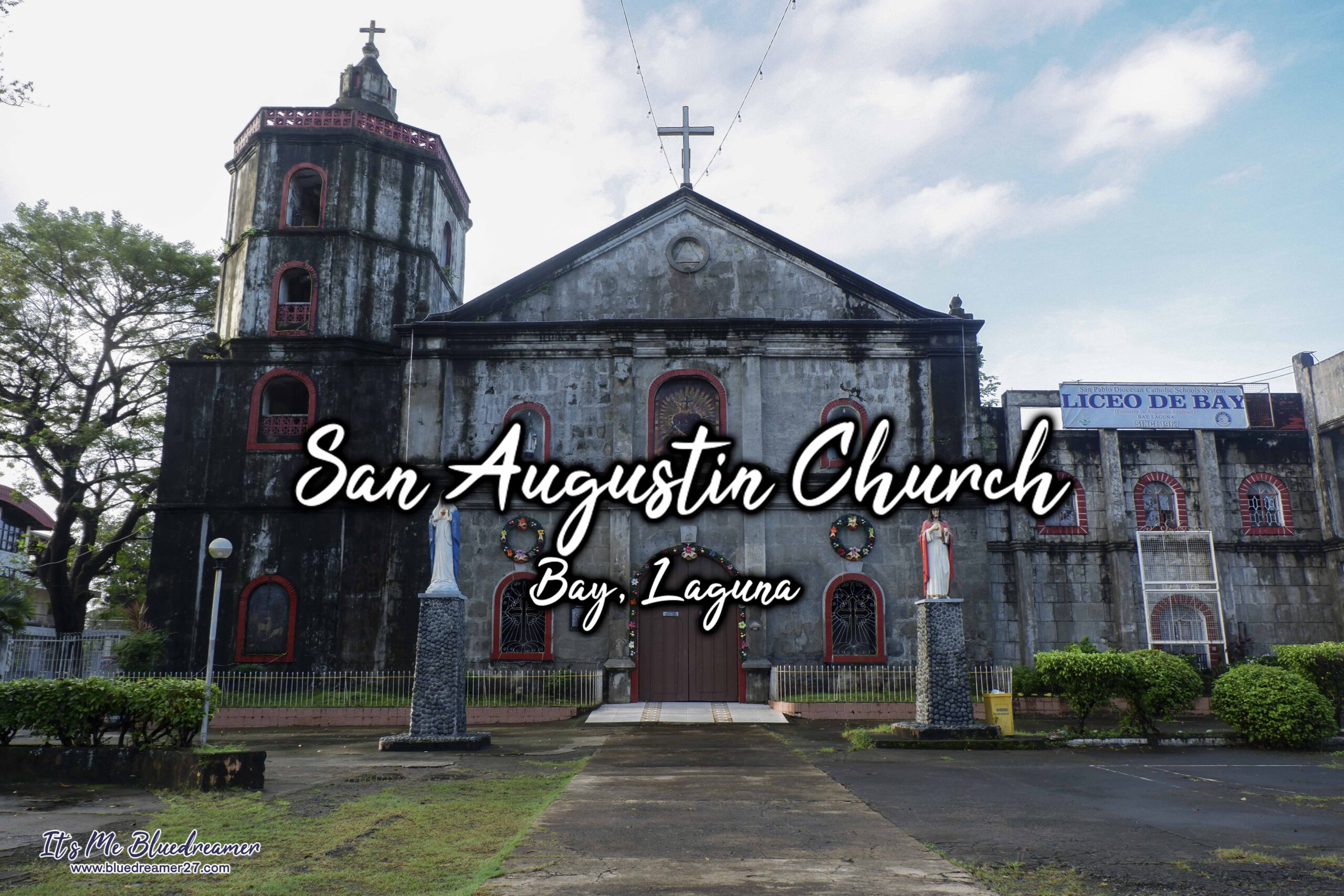 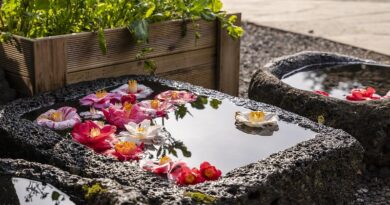 5 Reasons Why You Should Plan a Trip to Jeju, South Korea