From the producers behind Godzilla comes another epic monster movie that will take us to a new cinematic universe. However this time, not with superheroes but with gigantic monsters!

Photo Credit to Warner Bros Picture
I remember when I was a kid, I used to be a big fan of Ultraman series and I enjoyed watching those epic battle sequences between two gigantic monsters. From a kid who grew up in 90s, I was introduced with film monsters like Godzilla in 1998 and its animated counterpart in early 2000 and of course, Peter Jackson’s King Kong of 2005. Now after 12 years,  I think it is about time that millenials should be introduced to this so-called “MonsterVerse” and Kong : Skull Island is just a perfect way to start it. Don’t get me wrong,  2014’s Godzilla is equally amazing and is technically the first film to start the MonsterVerse franchise but Kong : Skull Island created a perfect sense on why these insane giant creatures existed and why King Kong Vs Godzilla would become the most anticipated battle in 2020 (just think of it as a counterpart of the Avenger’s Infinity War). 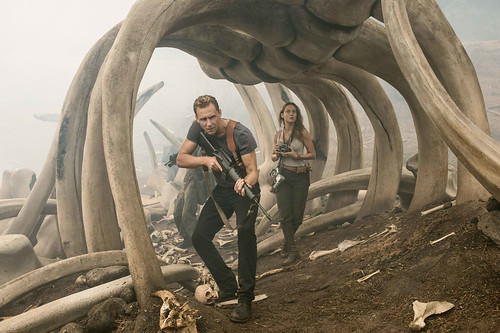 Photo Credit to Warner Bros Picture
The Story
Kong : Skull Island tells the story of a diverse team of scientists, soldiers and adventurers uniting to explore a mythical, uncharted island in the South Pacific. It took place in 1973 where the project was initiated by a secretive group known as the Monarch. William “Bill” Randa (played by John Goodman) was in charge of the expedition but in order to make it possible, he needs military escorts to secure his team’s safety. This is where James Conrad (Tom Hiddleton) came into the picture as he was hired for the mission  as a hunter-tracker due to his amazing combat skills. They are also accompanied by a squadron lead by Preston Packard (Samuel Jackson). The expedition unexpectedly ended up in a chaos after discovering that the island is inhabited by new species including the monstrous ape named Kong.

The Verdict
Kong: Skull Island interestingly remained faithful on how King Kong is originally depicted. We still got that huge ape that despite of its monstrous appearance still has a good heart that will do anything to protect his territory and every part of it (well, unless he is provoked). We still got that leading lady (through a character of Mason Weiver played by Brie Larson) who has a special attachment with Kong and how Kong is being misinterpreted as a Villain rather than the hero.

Photo Credit to Warner Bros Picture
It was such a great way to retell the classic story of this epic monster but what I love the most about Kong: Skull Island is how they inputted their modern approach and created an interesting twist to the story which makes plot a lot more convincing. It is not just about intense monster battles but it surprisingly offer a compelling story. It feels like a book with so many great chapters to explore. The cinematography is amazing and it feels like you are taken into a place that could possibly exist (who knows right?). The movie is best viewed in IMAX 3D to appreciate the breathtaking visuals.

Photo Credit to Warner Bros Picture
A monster movie will not be completed without those epic battle sequences. This film may not recreate that iconic empire state building scene but the bloody fight between King Kong and the Skull Crawlers will definitely not disappoint you at all. I also love the fact how the film embraces humor and use it in its full extent.  Jack Reilly who played Hank Marlow provided most of the movie’s comic relief while Samuel Jackson’s character is someone you will either hate or love in the process.

Overall, I am giving this film a rating of 4 out of 5. I personally think that it is way better than the King Kong movie of 2005 with deeper and sensible plot and well advanced and highly realistic CGI effects.

Be sure not to leave yet after the movie! Stay until the credit ends and you will witness a scene that will tease you to the upcoming sequels as part of this growing MonsterVerse! Honestly, it gives me chills after they revealed what is possibly in store for us in the next monster film movie!

The only question I have in mind right now is how they are going to merge the two films into one cinematic universe. The timeline presented in Godzilla is set on a present day while Kong : Skull Island is set on 1970s. I have a feeling that there will be a huge time skip for Godzilla Vs Kong and Tom Hiddlestona and the rest may not reprise their roles anymore…. or Godzilla : King of the Monsters could be another period film that is set after the events of Kong : Skull Island.

Kong : Skull Island will hit theaters on March 9! Get ready to enter a new Cinematic universe that will bring Kong back to its former glory!

For the mean time, feel free to watch the trailer below