After visiting San Nicolas de Tolentino Parish in Capas, Tarlac, we headed to our next destination. Located in San Jose, Tarlac is another popular tourist destination – The Monasterio de Tarlac. The Monastery is situated on top of the Mount Resurrection. The place is also known for housing a relic of the True Cross. Another noteworthy feature of this place is the 30ft tall statue of the Risen Christ overseeing the city and the wide mountain range of Zambales. 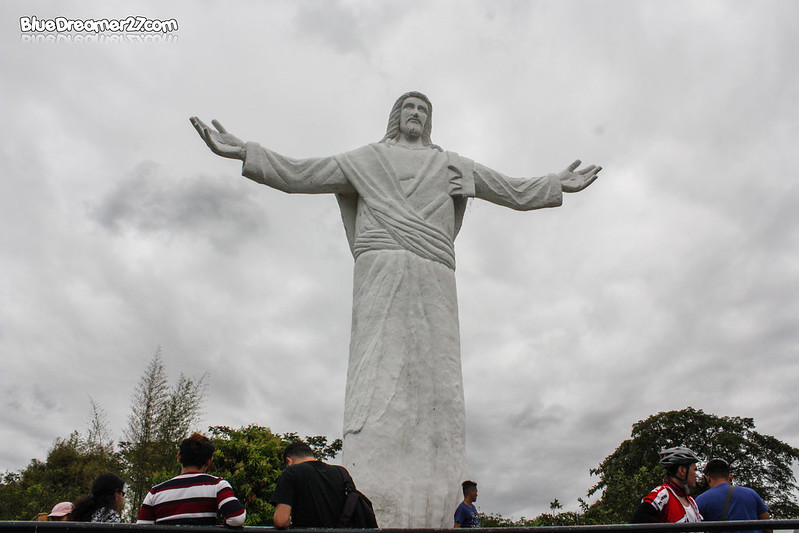 We were welcomed by such a great crowd. Monasterio De Tarlac covers a huge 278-hectare of land. Part of which is the Tarlac Ecotourism Park, a project by the former congressman Jose Yap. It is also interesting to note that there is an ENTRANCE FEE of Php50 in Monasterio De Tarlac and the place is open daily from 7 am to 6pm. They said that the fee is for the maintenance of the place which is fairly reasonable. 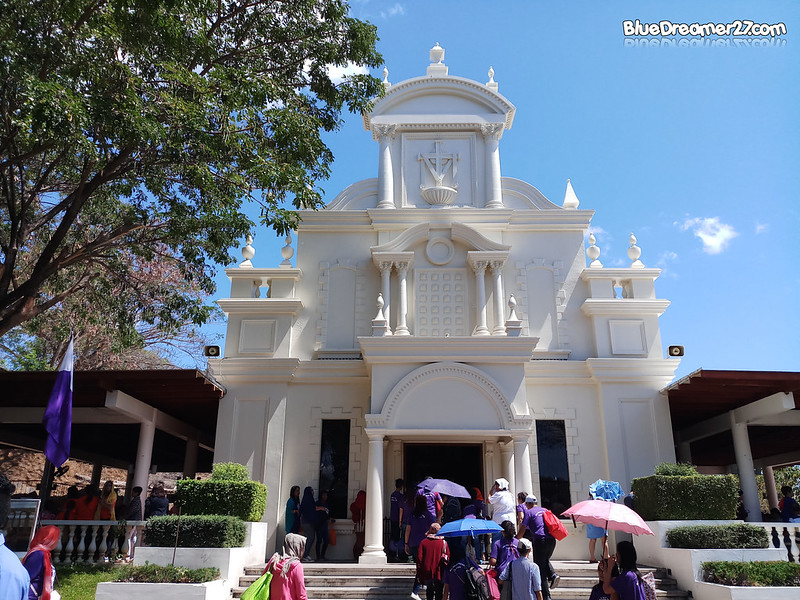 Unlike many monastery in the country, Monasterio de Tarlac is relatively new. The construction of the place concluded on year 2000 and was opened to public the year after. The Monastery is run by SRC Monastic Community (Servants of the Risen Christ) which is founded in 1998. The mass is often being held in a small chapel near the piazza. 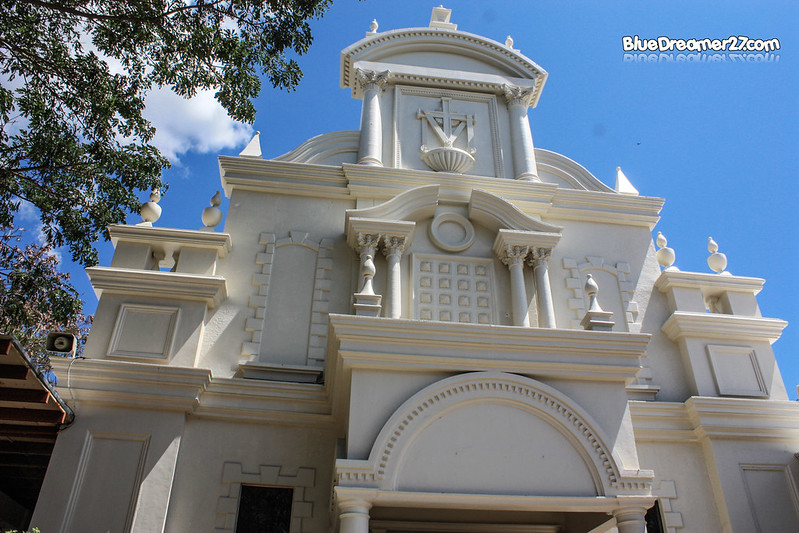 It is a very simple small chapel with a simple baroque-inspired facade. Despite the simplicity, what you can find inside is the relic of the True Cross. The True Cross is said to be the wooden cross where Jesus Christ was crucified. It is notably discovered by the Empress Helena (now Saint Helena). Many churches around the world posses fragmentary remains of the said cross and Monasterio De Tarlac happens to be one of them. 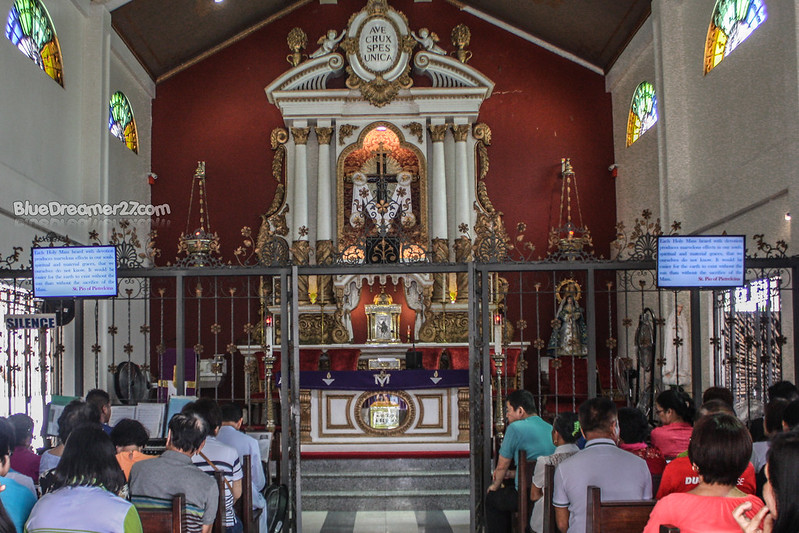 Fr Ronald Thomas Cortez, the founder of SRC attended the World Youth Day in 2005 where he Met Msgr. Volker Bauer, the custodian of the said relic. Msgr Volken entrusted the relic to Fr Cortez and in 2005, the sacred relic of the True Cross arrived in the monastery. In 2007, the relic was enshrined in the chapel. Visitors can actually touch the relic after every mass.

The interior of the chapel is equally simple yet it features a grandeur main altar with the image of the Holy Cross on the center niche. Underneath the communion table is the golden box where the Relic is enshrined. 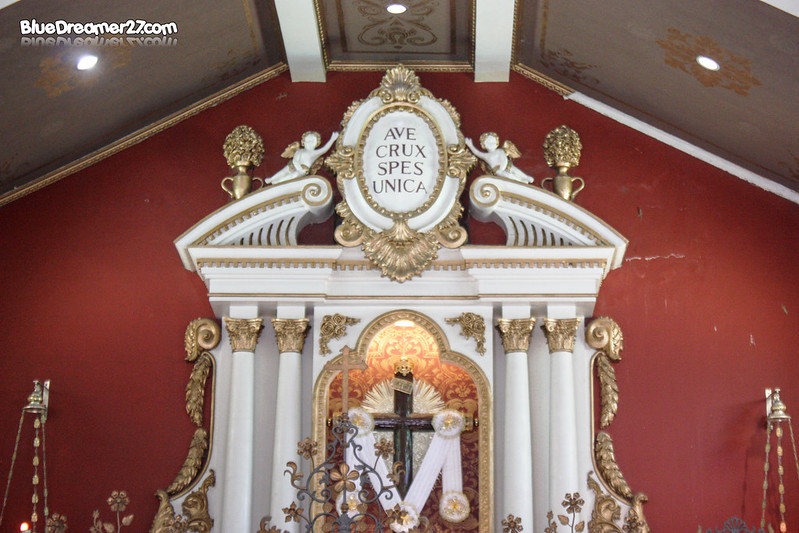 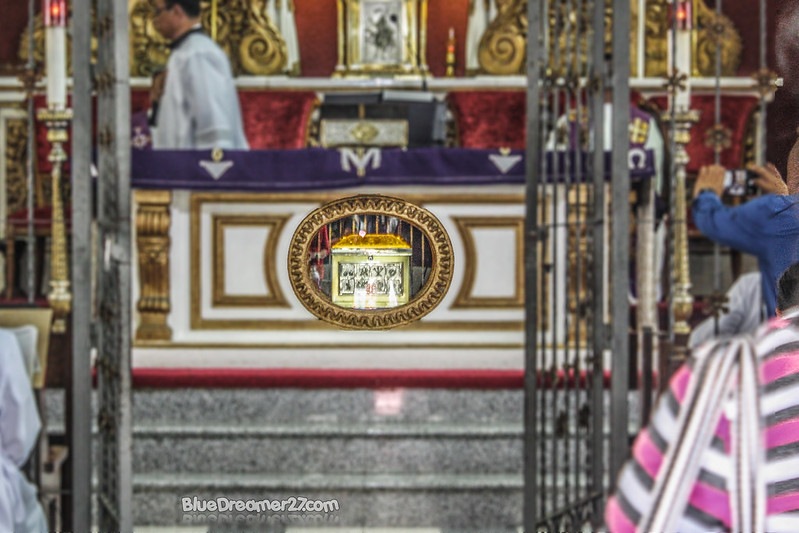 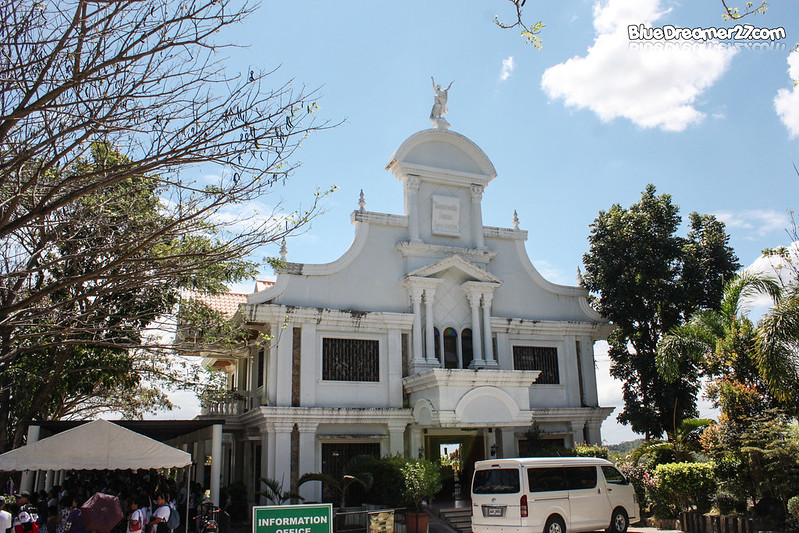 There’s also a bigger church nearby. Interestingly, it offers a more impressive facade and absolutely more spacious compare to the chapel. Although I learned that masses are not yet being held in this church. The construction is probably not yet done but you can clearly tell that it is almost over. The church is probably the Monastery’s solution to accommodate the growing number of devotees and pilgrims who visit this place. 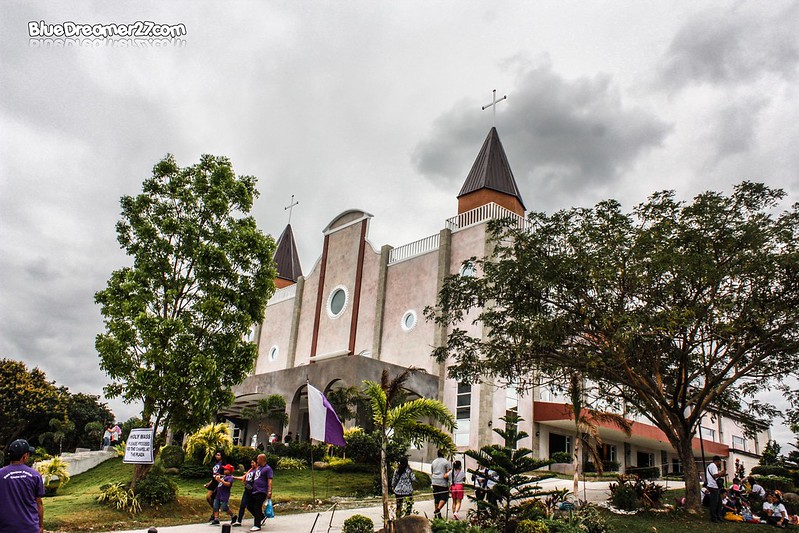 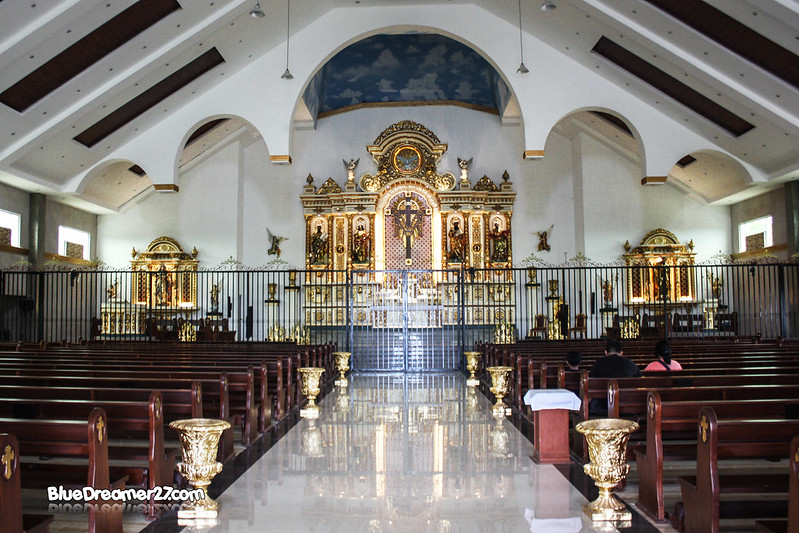 The interior of the church. Much like the chapel in piazza, there are tall gate rails to separate the main altar from the nave. It reminds me those tall gate rails in Pink Sister’s Convent in Tagaytay. 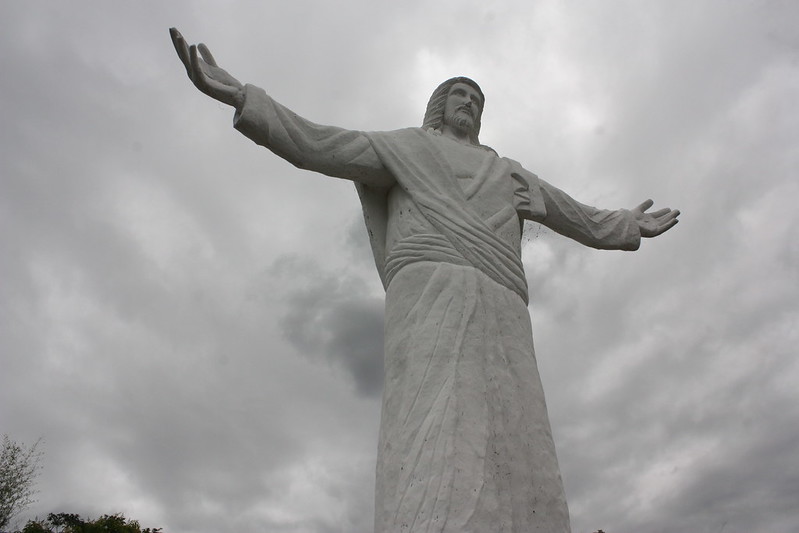 Witnessing the 30ft colossal statue of the Risen Christ is something you should not miss when visiting the Monesterio de Tarlac. Yes, that’s the same Christ the Redeemer Statue in Rio De Janerio in Brazil. The one in Brazil however is 98ft tall. 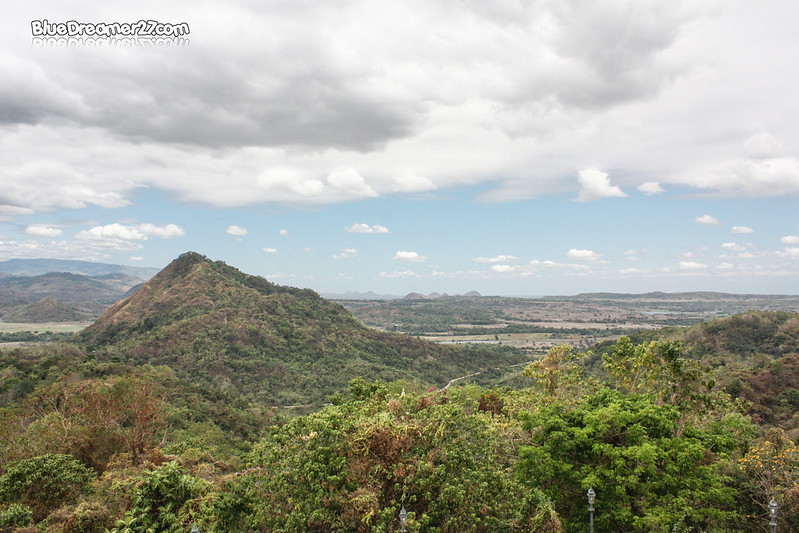 The statue is overlooking the wide mountain range of Zambales. 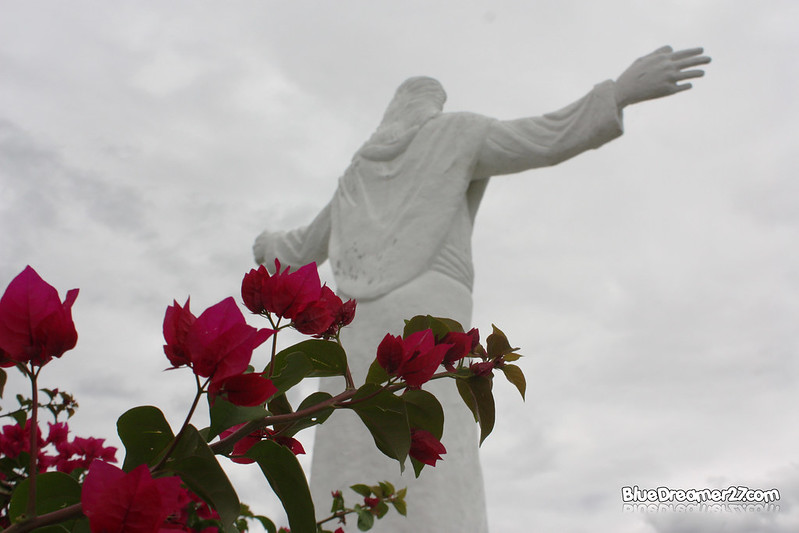 The thing I noticed with the Monasterio is the overwhelming crowd. It is becoming more like a tourist attraction rather than a serene place. 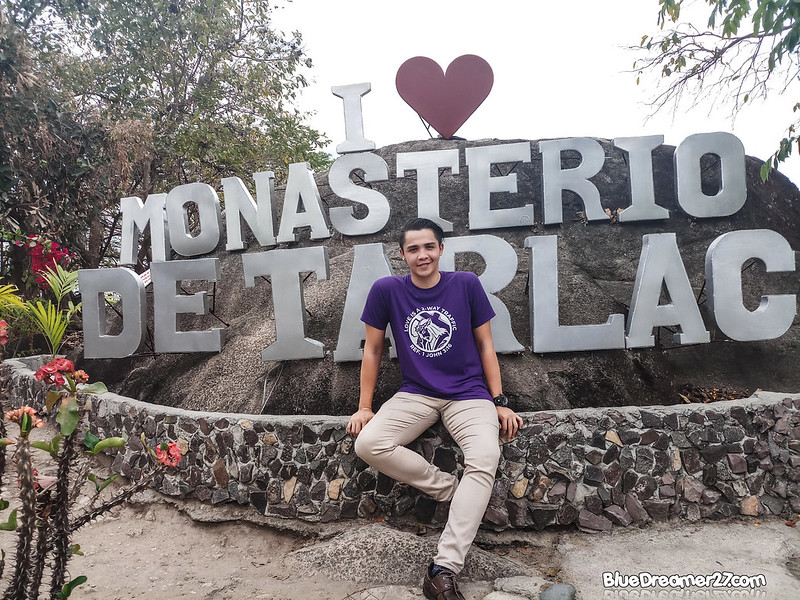 Things you should know before visiting Monasterio De Tarlac

►The Monastery is run by Servants of the Risen Christ Monastic Community
►The construction of the monastery concluded in year 2000
►It houses the relic of the True Cross
►Pilgrim Mass at the plaza every 10:30 Am and Holy Mass at the Chapel at 3PM
►Take note that they are CLOSE EVERY THURSDAY for Maintenance and Monastic program.
►There is an entrance Fee of PHP50 Monasterio De Tarlac
►Parking is quite a challenge due to terrain condition
►Cafeteria/ Canteen can be found near the gate
►You may also spot people selling bamboo crafts. Kindly support them, the coins banks are just 50PHP anyway.
►The place is also PWD-friendly

How To Get to Monasterio De Tarlac Via Public Commute

How to Get to Monasterio De tarlac Via Private Car

After getting inked by one of the youngest mambabatok (Check : Journey to Buscalan – Inked by The Youngest Mambabatok), Mr Atong Laguiao guided us all to Whang Od’s house

After visiting the historical church of Paete (Check: Saint James the Apostle Parish / Paete Church), we headed to another stunning church in Laguna. This time, we went to Pakil. 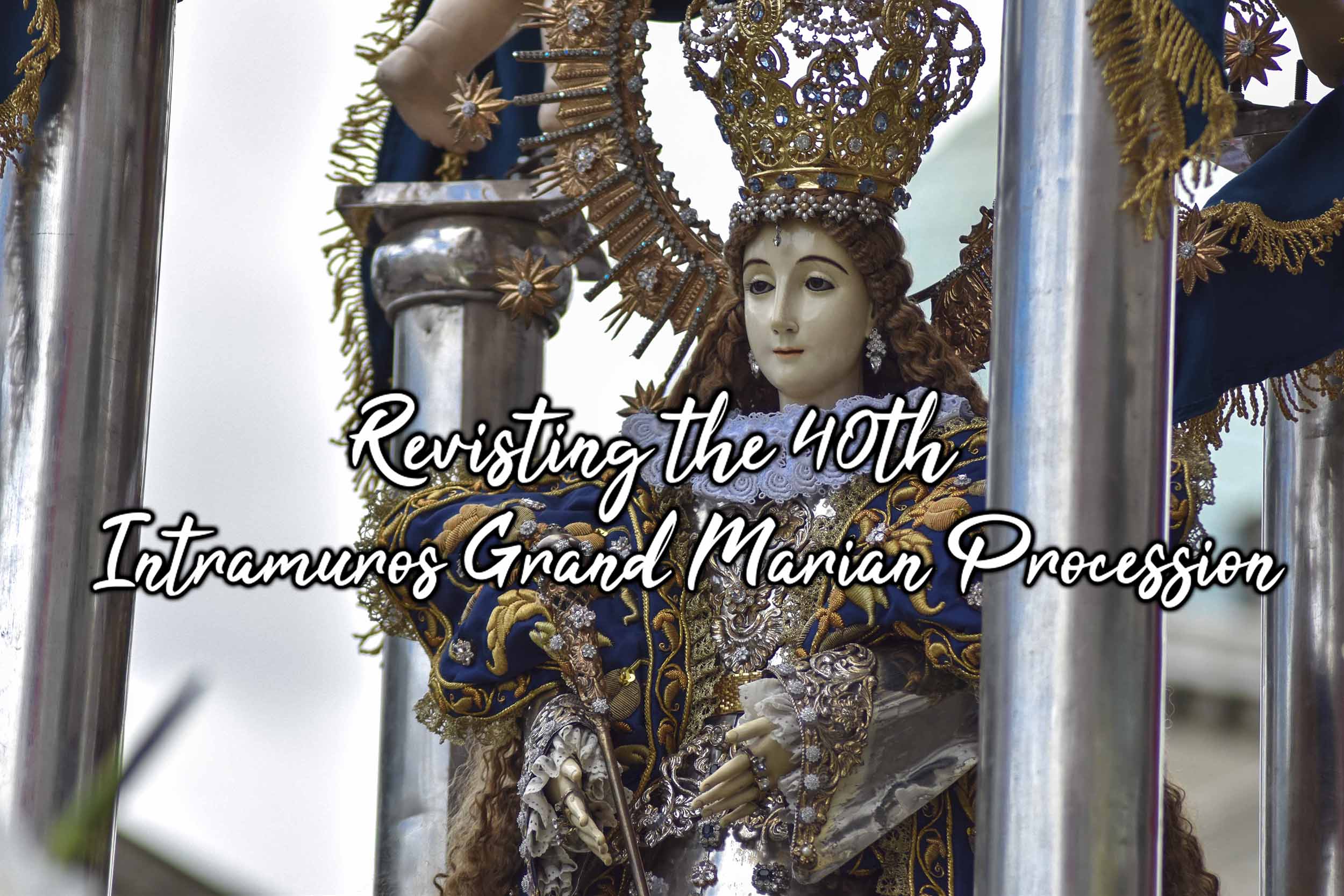 Over hundred of Marian images should have been gracing the street of Intramuros today ~ December 6, 2020 (the first Sunday of the month) as part of the yearly Intramuros