The Project Saysay Posters And The Baybayin Workshop

Last August 29, in celebration of National Heroes Month, the Project Saysay in cooperation with the National Historical Commission of the Philippines and Sanghabi facilitated a three day workshop that aimed not just to introduce but also to teach the participants the basics of Baybayin, an ancient Philippine script. I was grateful enough to be part of the third and last batch of participants. Although I already learned about Baybayin from the workshop held at Casa Consulado (also facilitated by the Sanghabi members), the Project Saysay actually came first but it just so happened that the Sulyap Sa Quiapo lecture series was held weeks ahead of the Project Saysay Baybayin workshop. 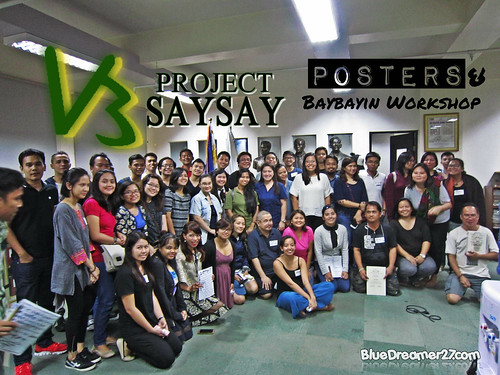 I would like to note that Baybayin is not really the sole project of Project Saysay. They actually have a different advocacy which mainly aims to spread the words of wisdoms of our great heroes in every Philippine classrooms through their so-called Project Saysay posters. The Baybayin workshop came into picture when their team received an overwhelming response after posting a Baybayin-related topic on their official Facebook page. This eventually led to a 3 day workshop  in partnership with the Sanghabi who also led the workshop.

Project Saysay is a youth-led project founded by Mr Ian Alfonso. The main objective of their group is not just to spread the words of wisdoms from our beloved heroes through their posters  but also to make our Philippine heritage and history relevant to younger generations. The project itself also teaches kids on how to be creative and resourceful since the materials for the posters are mostly recycled and very inexpensive as well. 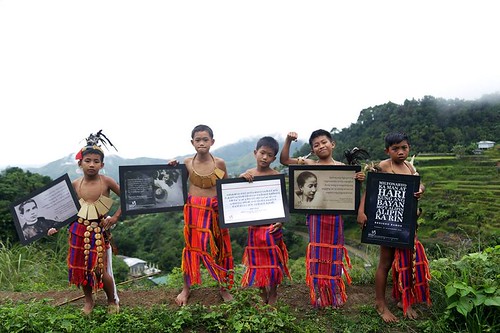 What’s With the Posters?
Each poster will feature notable quotes from some of our greatest Filipinos (modern and old). These words of wisdom are not just taken from our heroes but also from those great Filipinos who have done significant contribution to our country (like former president Ramon Magsaysay and Filipino statesman Claro M Recto to name a few). As of August 2016, they have gathered over a hundred quotes and a total of 1640 posters have been distributed and a total of 796 classrooms and libraries were reached.  The Project Saysay aims to distribute 21,000 posters by the end of year 2021. Take note that they are distributing these posters to schools for free. They do not have funds of their own but they are being supported by various institutions. They are also not accepting donations but are encouraged to be benefactors or donors and choose their recipient school. They also came up with the so-called KILOStration Program which aims to collect used Illustration boards (15 x 20 in size) that are still in good condition to cut down their expenses (resourcefulness at its finest).

The Baybayin Workshop
Even though not really part of their advocacy , the Project Saysay team gave their full support in reintroducing the native Filipino script to younger generations. In partnership with the Sanghabim a non-government organization that promotes indigenous Filipino culture through music & movement workshops and rituals. The workshop was actually led by the same group of people behind the Sulyap Sa Quiapo Lecture series including Mr Leo Emmanuel Castro and Mr Reimon Cosare. 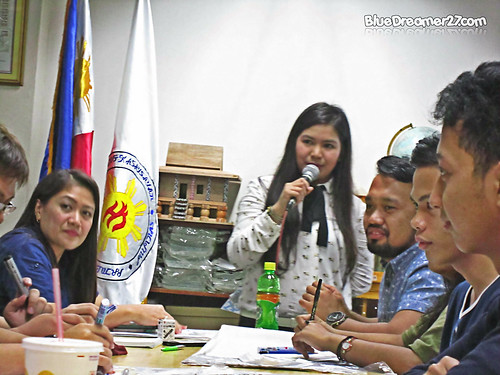 Ms Jem Bareng gave us a very enthusiastic welcome. We were also asked to introduced ourselves 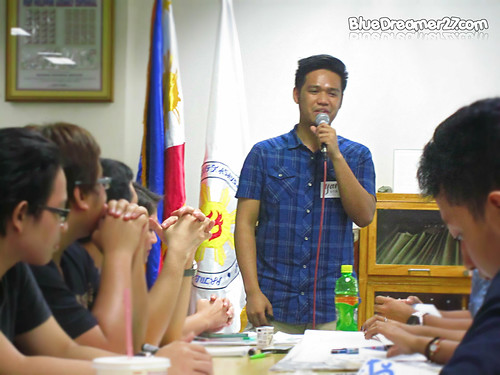 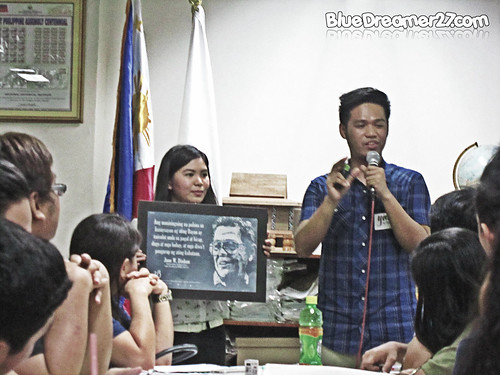 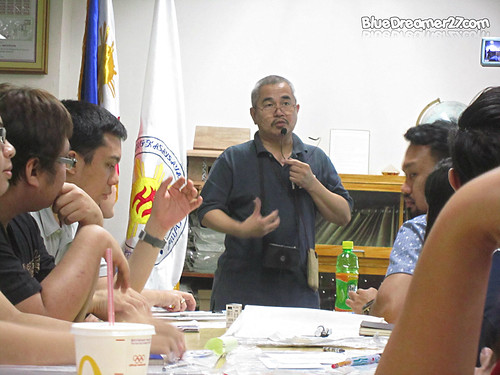 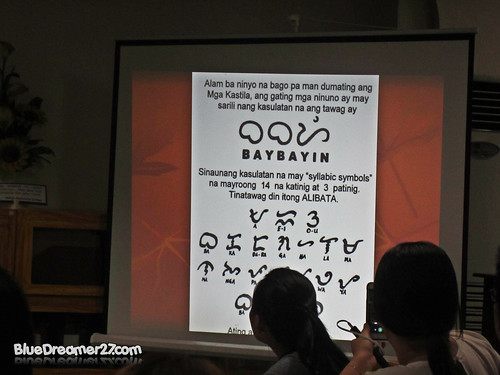 The introduction of the baybayin

The topic is very much the same with what I have learned from the Sulyap sa Quiapo workshop but this time, it was done in a much broader explanation. I am not going to explain more about the history of Baybayin (you might want to refer to my post here for more details) but I would like to highlights the usage of baybayin today according to Mr Cosare. When I first posted about the baybayin in this blog, a commenter once mentioned how happy he is that there are still people who are keeping our history and our heritage alive by reintroducing Baybayin to newer generation but unfortunately, Baybayin has no practical use today. Although I must say it’s true, Mr Cosare shared us how the script is being used and applied today.

Baybayin as a form of Art 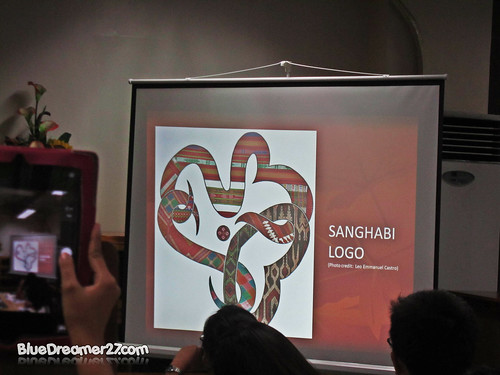 The Logo of Sanghabi which features the three syllabary of Baybayin (Sa, Ha and Bi)

Little did we know, Baybayin is being used by many organizations, companies and institutions as part of their official logo. In fact, there is a Bill filed in the congress not just to declare Baybayin as the National Script of the Philippines but also to mandate businesses and Government organizations  to put a Baybayin translation in their logos. The logos of FEU for an instance feature Baybayin to represent each institute 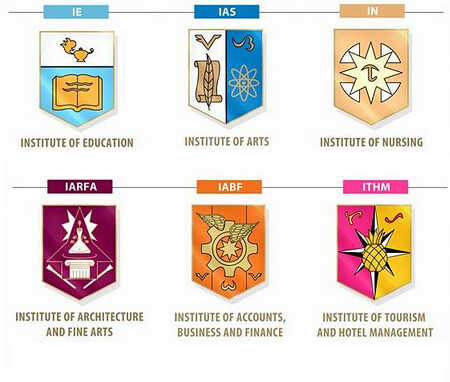 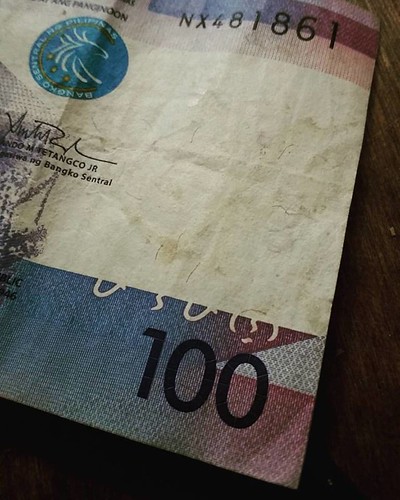 Even our new Bank notes have Baybayin too. There are four syllabary which translates to “Pilipino”. Did you know that the man behind this design is not a Filipino? The guy’s name is Paul Marrow who knows more about Filipino culture and heritage than many of us today. 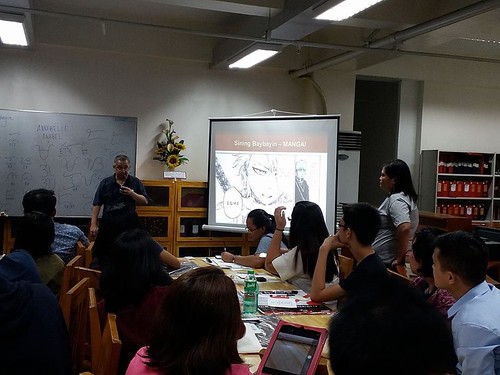 If you are lucky enough, you might discover Manga that are translated to our very own Baybayin too! 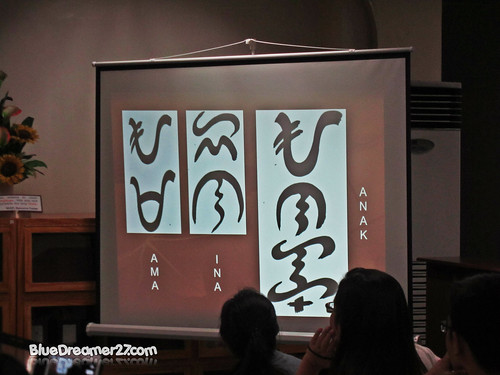 The principle of “Ama, Ina, Anak” by Mr Reimon Cosare

Baybayin As a Way to Reflect
According to Mr Reimon Cosare, Baybayin can be an effective tool to reflect. These symbols are not there for no reason. Baybayin are already existing even before the Spanish arrival. Therefore, these symbols are not influenced by other cultures but our own. Our ancestors did not just write them down. Each symbol must have their own story to tell and this is were the reflection will come in. Mr Reimon Cosare and even Prof Teresita Obusan came up with their own books stating their own theories and reflections to baybayin. 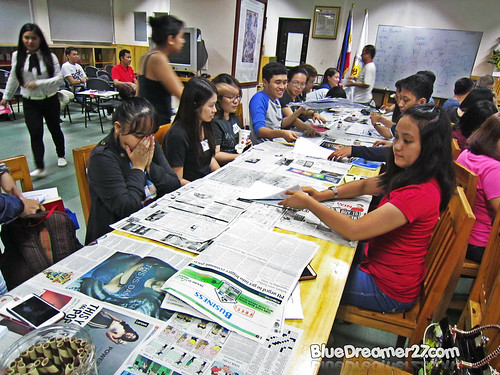 After the lectures, we came down to the most interesting part of the event, the Baybayin workshop 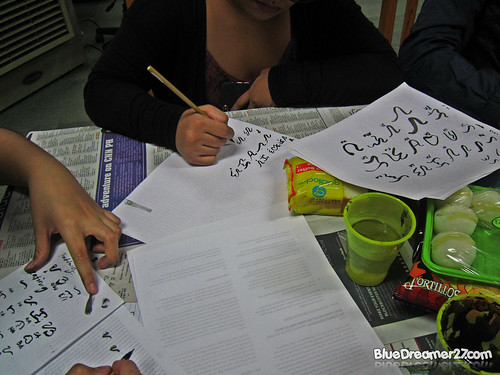 Brushes ,  inks and paper were all provided and we have ample of time to practice writing Baybayin 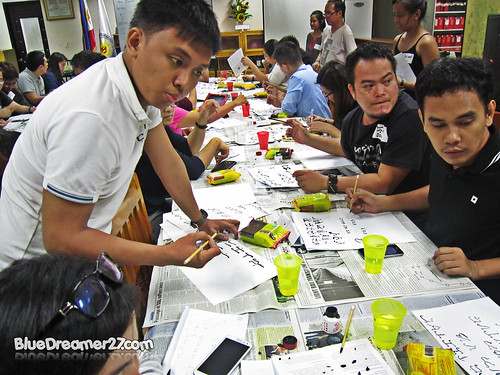 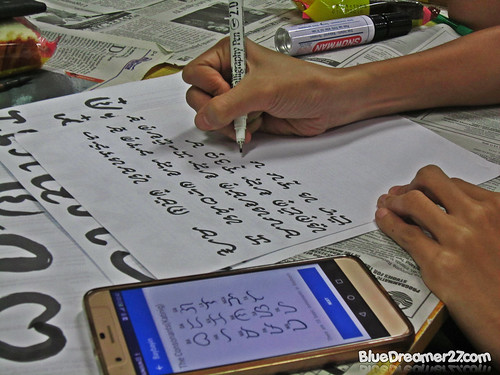 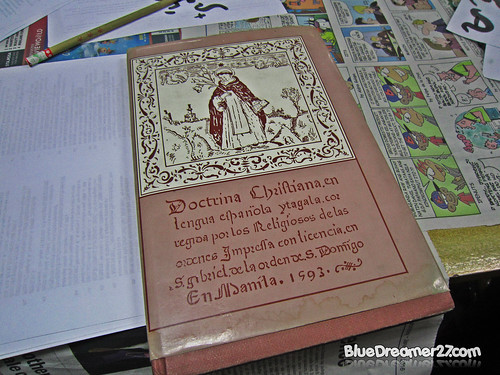 I also got the chance to take a closer look to this replicated copy of Doctrina Christiana. 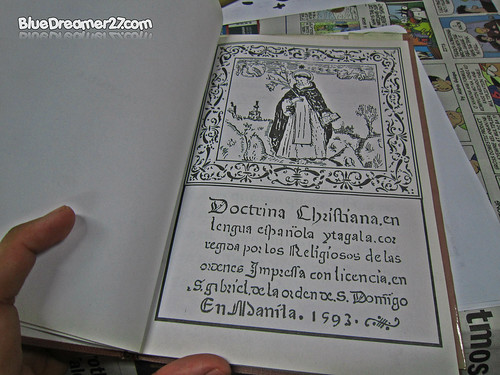 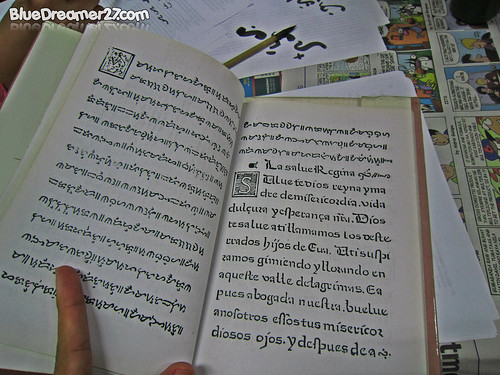 The content of the Doctrina Christiana is written in three different scripts (Tagalog, Spanish and in Baybayin) 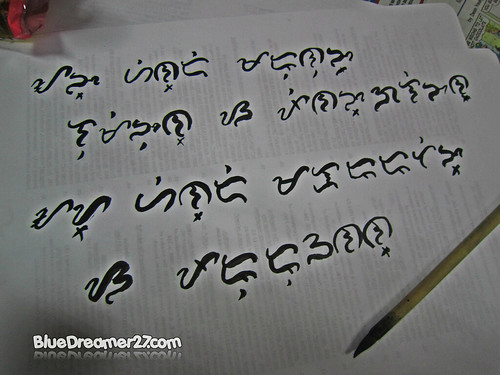 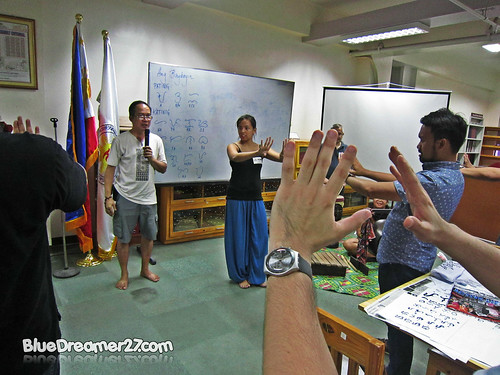 When we all thought that the workshop is all about calligraphy, well, we’re all wrong because we were introduced to brief dance workshop that teaches us how to translate Baybayin into a dance. The dance is called PangalabayinPangalabayin is basically a dance that is merely inspired from “Pangalay”, a native dance from Sulu Tawi-tawi and is merged with the Baybayin , thus Palangay-Baybayin – Pangalabayin. The dance is accompanied by music from native musical instruments. The gestures and movements here are based on how the Baybayin symbols are being written.

5 thoughts on “The Project Saysay Posters And The Baybayin Workshop”

Holi Festival is an annual  Hindu religious festival that is being celebrated in countries like India and Nepal. Luckily, we do not have to travel that far just to celebrate such

Finally, here comes the post to conclude my Las Casa Filipinas De Acuzar experience. As much as we want to explore all the houses in the resort, not all of

Today, i will buzz about the recently held wedding by a family friend of us Robert and Carmela. I found the couple very sweet and it seems that they really