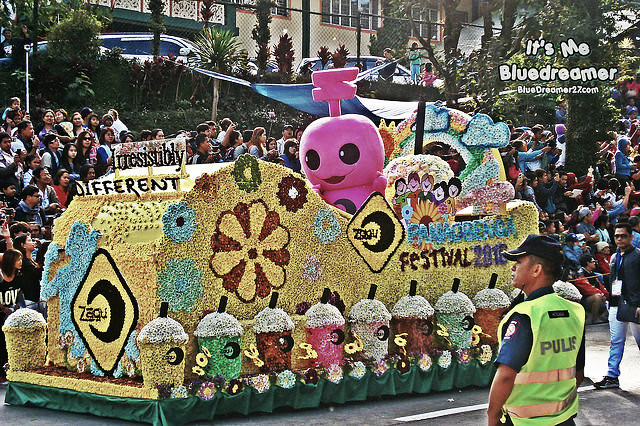 Panagbenga Festival is nearly approaching and few weeks from now, the Session road of Baguio will be filled colorful flowers. Panagbenga is one of the well-known festivals here in the Philippines. It is a month-long annual flower festival occurring in Baguio. Interestingly, to give you a brief info, the term Panagbenga is basically a Kankanaey term ( a South-Central Cordilleran language) which means “a season of blossoming, a time for flowering” as it is celebrated on the month of February when flowers are starting  to bloom. This festival reflects the history, traditions and values of Baguio and the Cordilleras. It is indeed a month long celebration  but the grandest of them all are the last two days of February where the Street Dancing and Grand Float Parade are being held (it will be held on Feb 25 to Feb 26 respectively). (Check: Panagbenga Grand Float Parade 2016)

Now, before hitting Baguio for the much awaited Panagbenga Festival and to witness one of the most colorful and grandest parades in the country, here are the things you might consider and expect during the Flower festival. 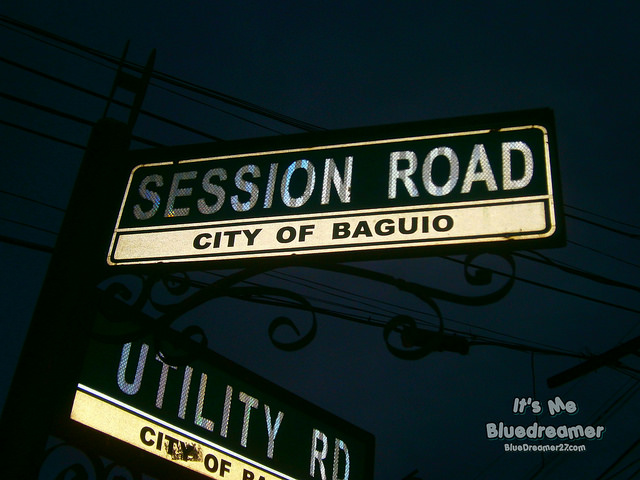 Arrive in the Venue As Early as possible.

If you are really aiming to capture the entire parade (both Street dance and Grand Float), then you better arrive in the venue as early as possible to avoid the challenge of breaking through the overwhelming crowd. Last year, we arrived in Baguio around 4 am and we were prompted immediately by our Tour Coordinator in Session Road (the starting point of the parade). Although the schedule is often not being followed, I think I would prefer to wait than watching the parade on the last minute before it begins. You have to be really patient though. Last year, the parade was scheduled to start at 7 yet we waited more than an hour before it begins. (it’s worth the wait though)

Look for the Best Spot

From Session Road to Maharlika to Harrison Road and to Melvin Jones Grandstand, all these roads will be filled with great crowd so you better pick a spot that will allow you to see everything on the parade. Since last year was my first Panagbenga, I failed to realized this factor so I ended up picking a not-so-satisfying spot. I personally think that the spots near SM Baguio is a perfect place to consider. The street dancers often perform in front of SM Baguio so if you want to capture those wonderful performances, you might consider picking a great spot as well. 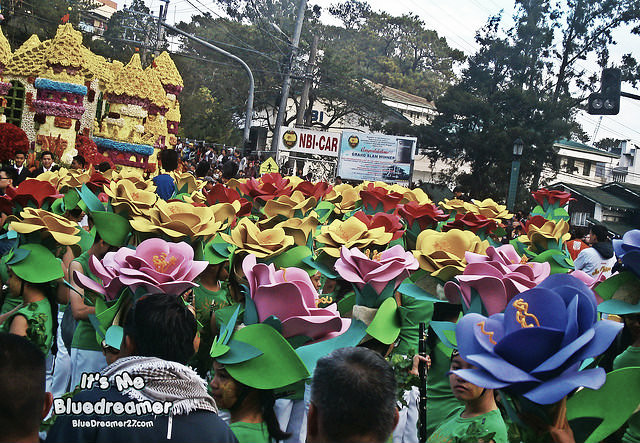 It’s going to be a colorful event so you better bring your best gear to capture them all. I am not sure though if drones are allowed during the parade. Since this is a festival that gathers an overwhelming crowd, drones are probably restricted but I’m not totally sure about that. Please be mindful as well that you will not be allowed to cross the road during the parade. If you arrived early, then you might get the chance to take closer shots of the float.

Bring A Bottle of Water with You

It is going to be an exhausting event. You will be standing for an hour or so probably on the same spot. The crowd is too overwhelming that you can barely even move. You better bring water with you to hydrate yourself since you will be dealing with scourging heat (yes, even you are in Baguio expect a surprising hot weather too). Well, this is just a friendly advice unless you can bear with such heat and endure long thirst haha.

Wear Light, Apply Sun block and bring Something to Protect You From Scourging Heat

We are talking about Baguio for God sake so most of you will expect that chilling and possibly freezing temperature but what I experienced last year was completely surprising. Well, it was freaking cold when we arrived in Baguio around 4 am to 6 am but when the parade started around 8, we were exposed to the scourging heat of the sun. I was even wearing a jacket and you have no idea how much I perspired during the whole event (pwede ko nang ipiga yung damit ko haha). Anyway, I don’t know if the weather will be the same but just to make sure, consider wearing light (but not too much) clothes. Bring sunblock too and a hat or a cap to protect you from such heat. 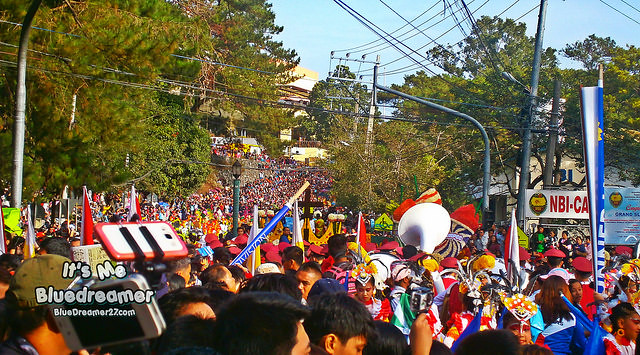 Prepare for A Huge Crowd

Panagbenga Festival is one of the most anticipated festivals in the country so you must expect that people from different parts of our country will gather here to witness the event. I was even surprised when I saw such overwhelming crowd. If you got temper issues, then you may not consider this event because this will surely push you to your limits haha. A lot of people will do their best to pick a nice spot even if it means that they will push other people away. Just be cautious too because some people might take advantage of you. Don’t bring too much variables.

Parking Is A Challenge

If you will be in Baguio during these peak seasons especially during the festival, expect that finding a space to park will be a great challenge and somehow time consuming. You might end up parking somewhere so far from your desired venue and will require you a long walk. Some parking areas are free of charge but for your most convenience, you might consider availing those fee-based parking areas. 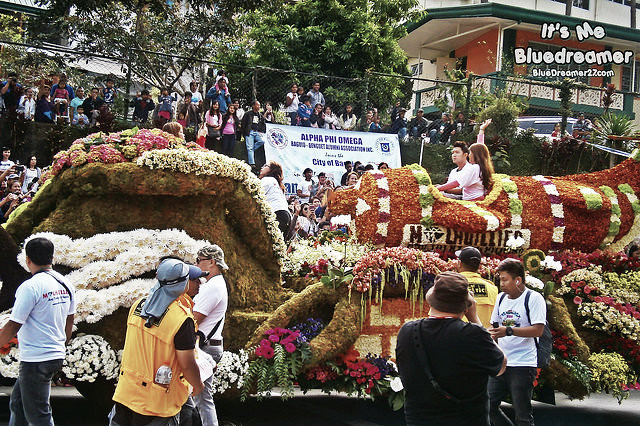 The parade often invites some celebrities. They will be riding on some of the floats so if you are lucky enough, you might get some photo opportunity with them. Last year, Probinsyano Star Coco Martin was at the last Float. Aside from him, we spotted Melai and Jason, Asi Taulava and some PBB Housemates.  Carrotman and Probinsyano were the highlights of last year’s Panagbenga Festival.

Consider A Side Trip to Baguio’s Popular Places

You’re already in Baguio so why not make the most out of it. After the parade, you can freely explore Baguio and visit some of its famous places. You can visit places like Burnham Park, Camp John Hay, BenCab Museum, The Mansion, Wright Park, Mines View Park, Botanical Garden, Cordillera Museum, Our Lady of Lourdes Grotto and a whole lot more. If you are willing to extend your trip, feel free to visit the Strawberry Farm and the Sto Bosa Village in La Trinidad Benguet. (I’ll post a separate entry for this but for the mean time, you can check my Day Trip To Baguio series last Year) 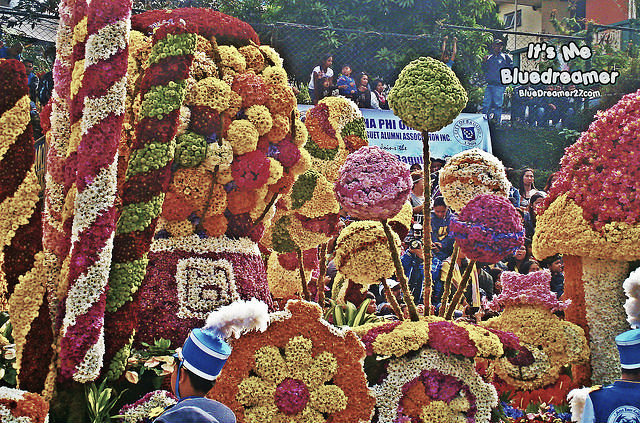 Look For A Place to Stay

It is more ideal to book a hotel a day prior to the big event. This is less hassle and it gives you enough time to relax. I took a day tour package last year and even though it was really a rewarding experience, it was also exhausting at the same time because I didn’t get enough sleep. You can check this list of Hotels in Baguio to stay during the Panagbenga Festival.

We’re back at the History Con 2016. We’re done featuring the event’s extensive car collections and now allow me to feature some of the exciting exhibit booths, activities and happenings