Last week, I was able to watch Marvel’s Ant-Man so allow me to share my own thoughts about this epic movie. To set some expectations, I want you to know that this review is going to be 100% bias haha. I am actually a big fan of Ant-man even before the Marvel Cinematic Universe hit the big screen. There are only four Avengers members that I am truly addicted with and they are Ant-Man, The Wasp, Scarlet Witch and Hawkeye and I’m so happy to see them all being adapted in the movie. The development of  Ant-Man movie took 10 years and I never thought that this movie will ever make it on the big screen.

Much like any movies from the MCU (except the Winter Soldier), Ant-Man managed to combined action and humor at the same time. This film will surely give you some laughs while giving you some intense action scenes at the same time. Ant-Man may not be the strongest superhero around and he may not be as famous as Captain America or Thor but that is actually the strongest point of this film, it’s very fresh to many! Who would have thought that a guy who can shrink himself into the size of an ant can kick some ass? He even managed to defeat one of the members of Avengers (whoops spoiler!)

Movie goers are not aware who the Guardians of the Galaxy are yet they were able to embrace the funny characters instantly and this is what exactly you are about to experience with Ant-Man. Paul Rudd is just a perfect guy for this character. He got the right charisma and humor to amuse the audience. The movie also features a very compelling plot. It follows a story of Scott Lang, a former system engineer of VistaCorp and a petty criminal who acquires a suit that allow him to shrink in size yet increase in strength. Little did he know, Hank Pym (the man behind the infamous pym particles/ played by Michael Douglas)) has been monitoring him and has been aiming him to become the new Ant-man. He was asked to steal the YellowJacket suit developed by his former protege Darren Cross and prevent him from using it from his treacherous plans. From here, his journey as Ant-Man will begin.

Ant-man cannot be more entertaining without his side kicks headed by Luis (Michael Peña) who provided most of the comic relief in the movie. Of course, I can’t help myself but to mention the lovely Evangeline Lilly who will soon play my beloved Wasp (another spoiler). Her character actually reminds me of Milla Jovovich and that Claire Dearing played by Bryce Dallas Howard in Jurassic World. Ant-man will not be ant-man without the Ants who played crucial roles in the entire course of the film. This is actually the ability I love about ant-man. I just love the idea of controlling them on my own will (this is why my fave character in Naruto is Shino LOL).

What I Would Love to See in the next Ant-Man movie or appearances: 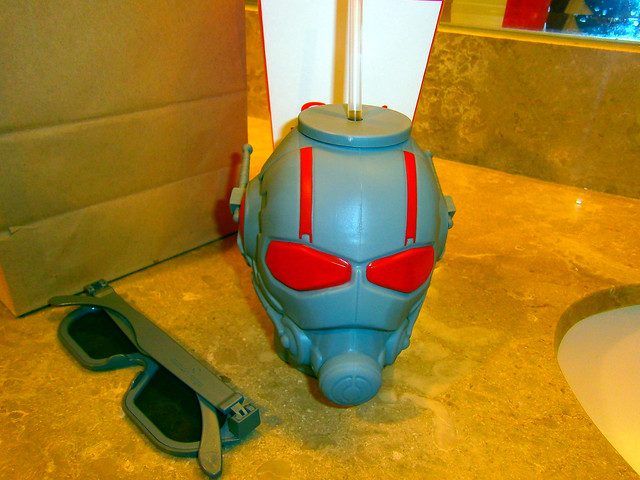 Check out this cool Ant-Man tumbler. I know that this is meant for kids but who cares haha

Overall, Ant-Man is one worth watching film. Regardless if you know the character or not, this one is truly entertaining and definitely a great addition to the ever-growing Marvel Cinematic Universe.

There were things in life that are not really worth exploring. I am a huge Science Fiction fan and based on all the books and movies I have watched, planet