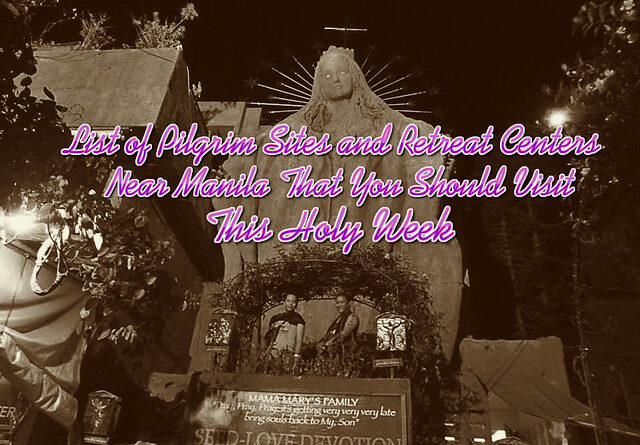 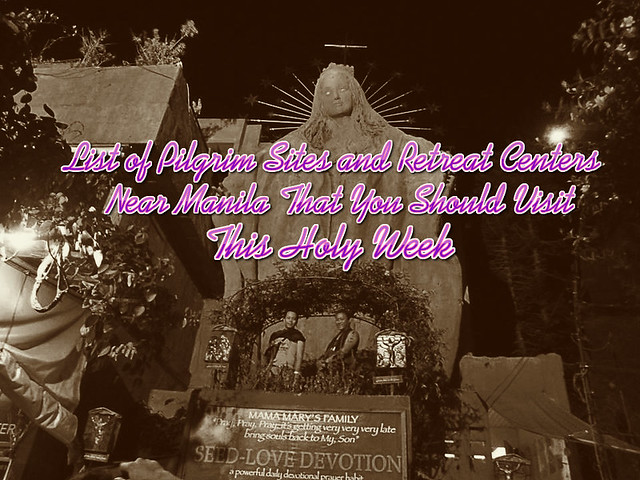 Holy Week is nearly approaching and while some people are taking advantage of the Holiday break by spending their vacation to beaches and somewhere far from the city to unwind, others are looking for a perfect place for them to reflect and to repent! Just in case you are planning to do the same, listed below are different popular pilgrim sites and retreat centers near Manila that you can visit this Holy Week. 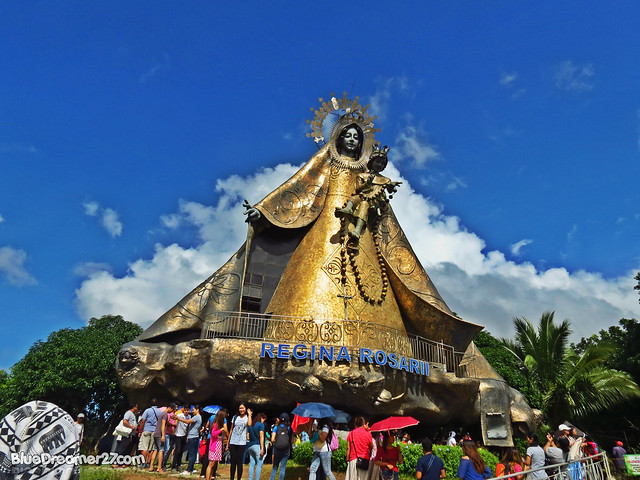 RICA basically stands for Rosarii Institute of Contemplation in Asia. The site covers 13.5 hectare land at the foothills of the Sierra Madre Mountains and was founded in 2009. The place is too big that it caters a lot of facilities including the well known 71-foot high statue of Our Lady of Regina Rosarii, St Hildegard’s Hill, Tilipunan, a Chapel, Way of the Cross, Animals and an organic garden. The Site is open from Monday To Sunday (Except Tuesday) from 8am to 5pm (Check : A Day Trip in Tanay : The Regina RICA) 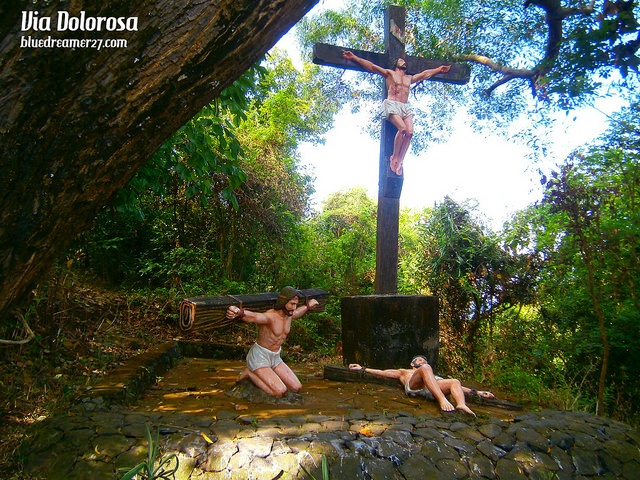 Via Dolorosa is formerly known as the “White Cross” simply because of the enormous white cross and the outsized image of Our Lady of Peace and Good Voyage located in Pinagmisahan Hills. It is one of the popular pilgrim site especially during Lent season because of their life-size images of station of the cross. You can actually walk from the Antipolo Cathedral towards this place or better yet ride a tricycle and ask the driver to take you there. (Check : Via Dolorosa Pinagmisahan Hills Antipolo) 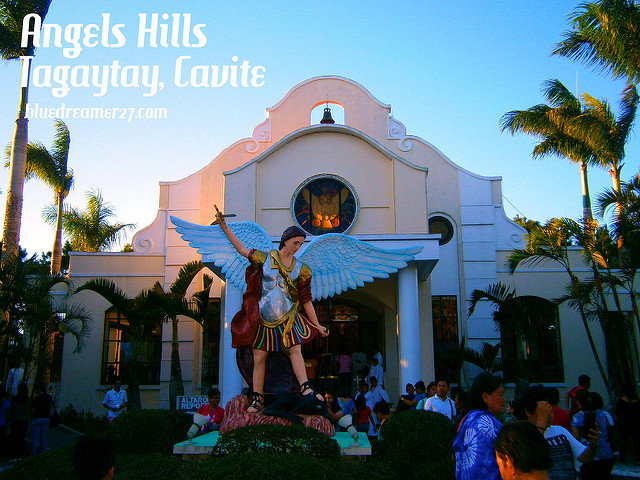 Angels Hills is one of the most popular destinations in Tagaytay especially during the Lent season. It is basically a Retreat and Formation center located in Arnoldus Road, Maitim II East, Tagaytay City (just few walks away from the Pink Sister’s Convent). Angels’ Hills is a community of lay persons committed in a special calling to serve people yearning to encounter God through our humble place and facilities. It is founded in 1999 and covers a total of 2 hectares of land. (Check : Angels Hills Tagaytay) 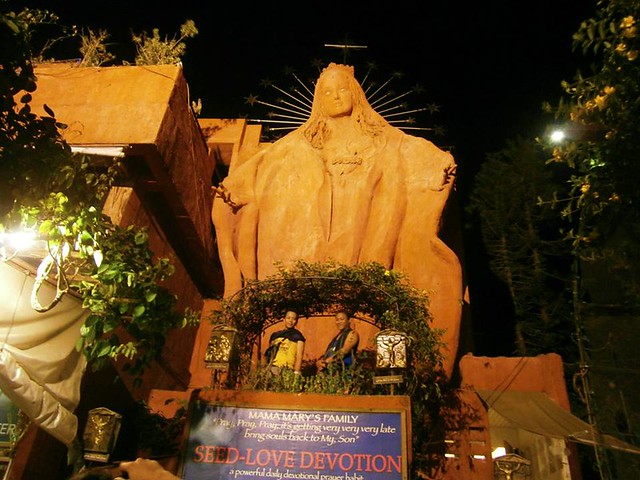 Tierra De Maria is describe as Mama Mary’s sanctuary for the pilgrims searching for the piece of heart. It is also called as H.O.M.E which wonderfully stands for Haven of Meditation and Enrichment. What makes the place more stunning is the 50-foot majestic image of Mary, Mother of God Queen of Heaven and Earth that welcomes all the pilgrims. Tierra De Maria is a project of Mama Mary’s Movement Foundation Inc and was established on January 1, 2000. They are open daily from 8 am to 6 pm (except when it is Lent season). The place also offers healing pray over which is conducted daily upon request and also a monthly first Saturday healing mass celebrated by Fr Larry B Faraon. (Check : Tierra De Maria Tagaytay) 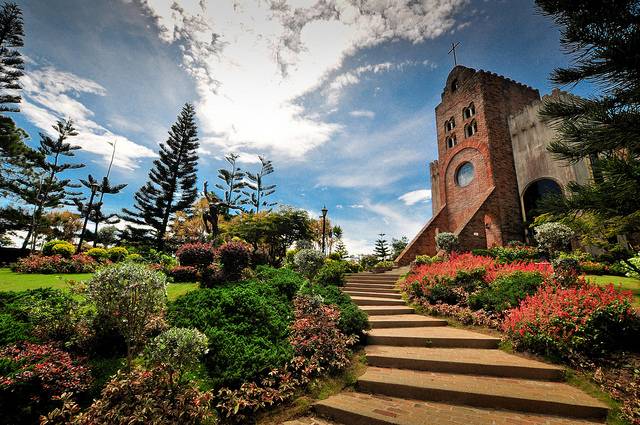 Calaruega is a Retreat Center administered by Fathers and Brothers of the Dominican Province of the Philippines. It is located in Barrio Kaylaway, Batulao in the town of Nasugbu. The site features a small chapel, various retreat facilities, hanging bridge, ponds and more recreational facilities too. Not to mention the stunning and relaxing view of Mt Maculot from the said site! Check their page here for more inquiry – Calaruega FB Page 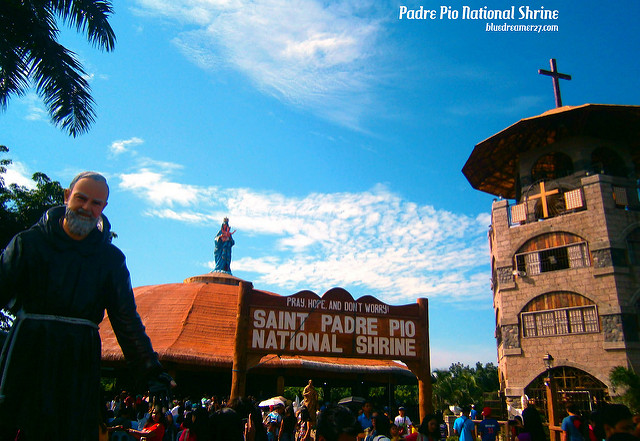 It was recently declared as a Shrine last year and what really makes this site so fascinating are the numerous miracles associated to the patron saint. This place has an interesting atmosphere. The dome-like shrine offers a serene and nature friendly set up as it is made from wood, stone, bamboo and sasa (bamboo plant). It features a separate bell and the miraculous Chapel of the Living Water underneath. Claypots filled with Holy Water can be found in every corner of the chapel allowing the devotees to get as many water as they want. You can also found life sized Station of the Cross in this site. (Check : National Shrine of Padre Pio Batangas) 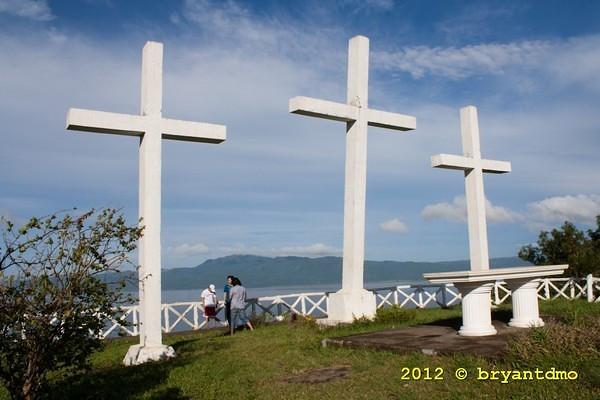 If you are an adventure seeker, The Tatlong Krus can be an ideal place to visit. The Tatlong Krus are three crosses on the peak of mount Humarap, part of the mountain of Sierra Madre located in Paete, in the province of Laguna. During Holy Week folks from Laguna and nearby provinces flocks to the peak of the mountain to pray and remember the sufferings Jesus Christ on the cross. Not to mention the marvelous view of the town of Paete which makes it a perfect place to relax, reflect and unwind. 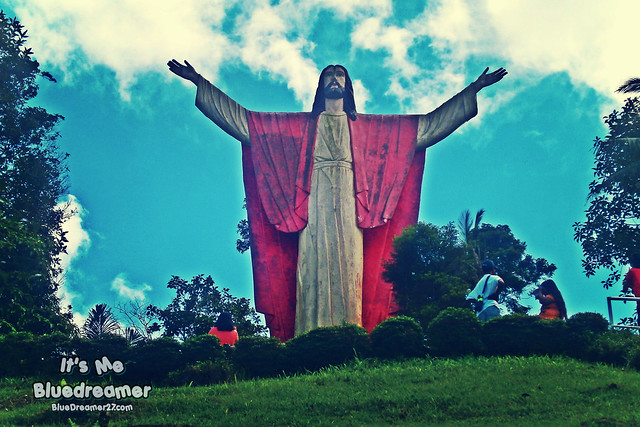 Kamay ni Hesus Shrine and Healing Center was constructed in February 2002 with the help of Quezonians and other Filipino Donors from various communities in the United States. It features life sized grotto image of the Way of the cross and the 50-foot statue of the Ascending Christ on its peak. People are encouraged to climb more or less 300+ steps to reach the top! Aside from this, the place also features a healin chapel and other attractions like Luklukan ni Maria, Noah’s Ark, Resurrected Christ, Gallery of Saints, Garden of Eden, The Angels Hill, The Marian Park and the religious Murals. (Check: Kamay Ni Hesus) 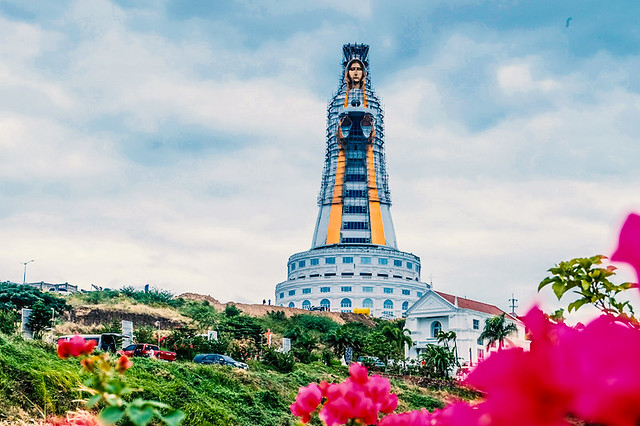 A new Pilgrim site is on the rise! The 315 ft tall Statue of Mary, Mother of All Asia is situated at the heart of the 130-hectare township in Montemaria, Batangas City. The statue of the virgin mary is taller than other notable statues like The Christ the Redeemer in Brazile or even the Statue of Liberty in New York. Aside from the monument, the shrine is also composed of retreat facilities, conference rooms, rosary trek, way of the cross, meditation ground, chapels , auditorium and more. (Check : Monte Maria Shrine ) 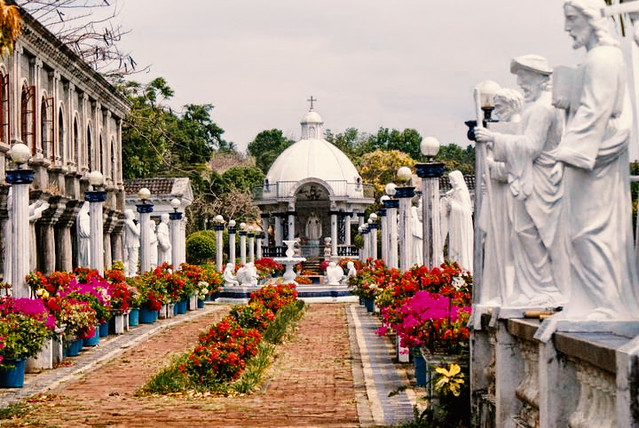 Also located in Batangas is a very serene and solemn pilgrim site ~ the Marian Orchard. The Marian Orchard was started by Lazaro L. Katigbak in 1988, when he acquired the land where it now stands.The orchard’s highlight is The Sacred Heart Tower which is a replica of Brazil’s Christ The Redeemer. The orchard is adorned by many colorful flowers and luscious greens. It features an overwhelming amount of religious figures depicting various image of saints and Mary. It also features a prayer garden, a chapel and an observation tower. 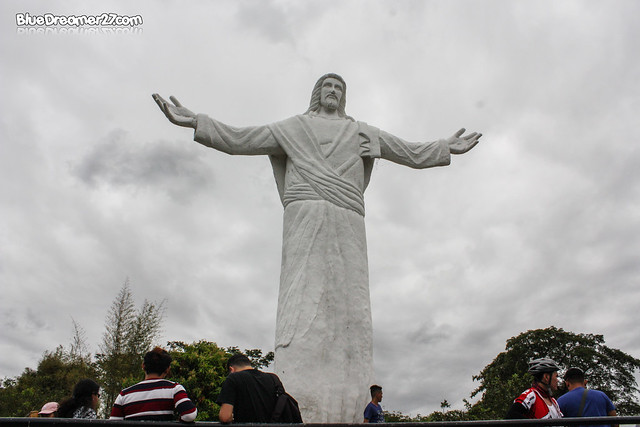 The Monastery is situated on top of the Mount Resurrection. The place is also known for housing a relic of the True Cross also features 30ft tall statue of the Risen Christ overseeing the city and the wide mountain range of Zambales. It is also interesting to note that there is an ENTRANCE FEE of Php50 in Monasterio De Tarlac and the place is open daily from 7 am to 6pm. Read more about this place : A Pilgrimage To Tarlac: Monasterio De Tarlac 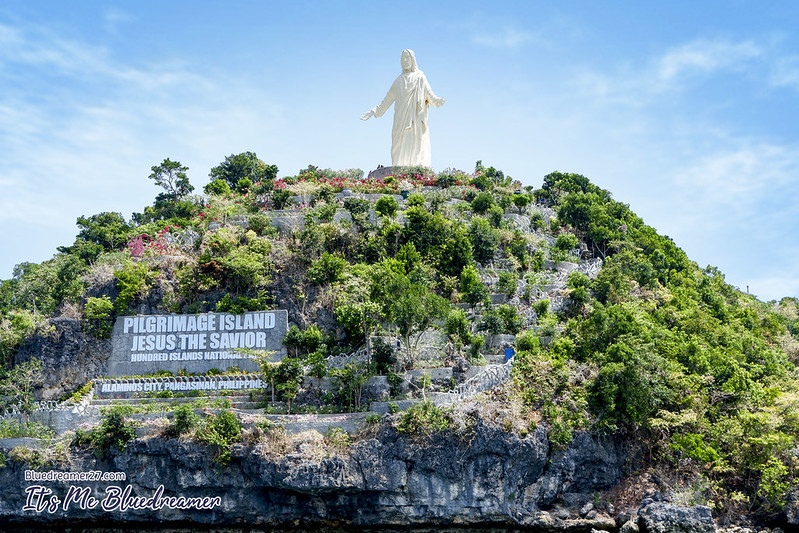 The newest attraction in Hundred Islands National Park was recently declared by the Diocese of Alaminos as a Pilgrimage Site. What really makes this island stand out above the rest is the 56ft Statue of Christ the Savior which you can easily spot even from afar. The Bishop of Diocese of Alaminos blessed the Statue of Christ the Savior along with all the 14 life-size Way of the Cross Stations and the island itself. The statue alone was completed in 2016 and was opened for public viewing the year after. (Check more at : The Pilgrimage Island – Hundred Islands National Park)

Check Out these Articles too 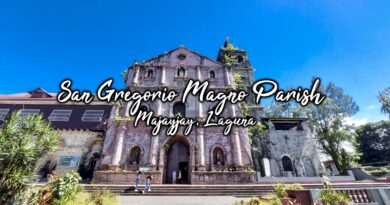 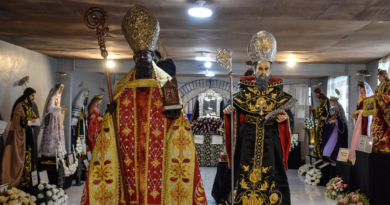 I Believe in the Communion of Saints: An All-Saints Exhibit in Tanza, Cavite 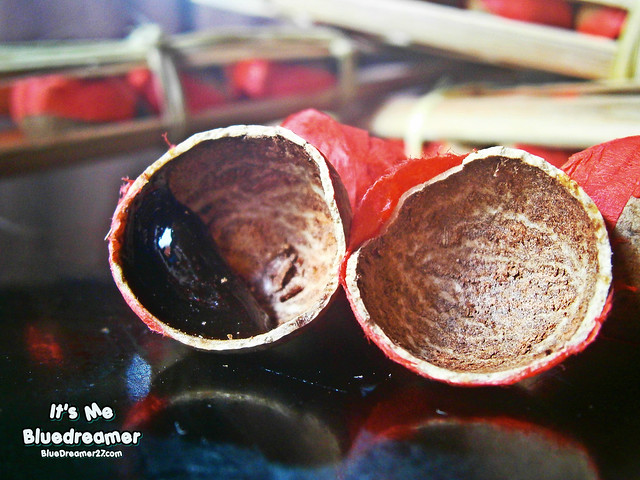