Few days ago, I was really grateful to be invited by Mr Axl Guinto to attend the recently held “Sulyap Sa Quiapo” lecture series. The event is actually part of the Q-Festival in celebration of San Sebastian Church’s 125th founding anniversary. The lecture event was held in Casa Consulado where four speakers were invited for a back to back lecture series that was aimed to introduce Baybayin (ancient Philippine script) and its deeper meaning. Each speaker has different topic to discuss but all of them are very much relevant to each other. It was supposed to be a two-day event but due to bad weather condition, all the talks were merged into an all-day event. We were warmly welcomed by Mr Paul Iturralde (one of the descendants of Iturralde family)
“Simula Ng Maharlika Life” (The Beginning Of Maharlika Life) 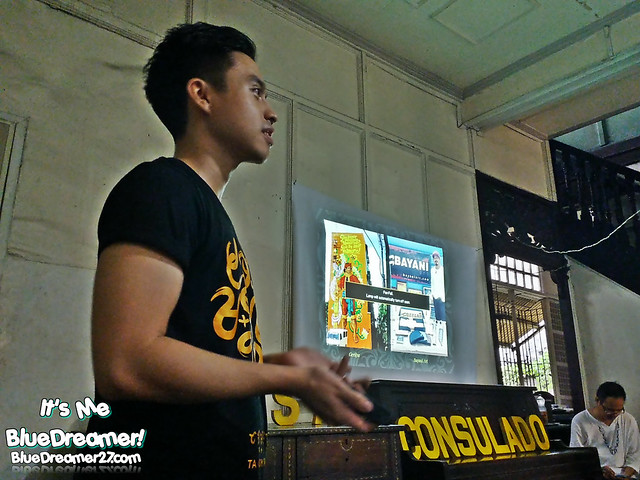 The first talk was led by a very young man Mr Ian Lucero that despite of his young age, his passion towards preserving our culture and the use of Baybayin in particular is really overwhelming. Mr Lucero is the creative mind behind Maharlika Life, an independently owned organization, a movement that aims to ignite our cultural renaissance. The group aims to honor our nation’s heritage through various methods especially through visual arts. The concept is very much identical to more established groups like Bayani Art and Gerilya. Maharlika Life is relatively new and we were told that the group was just established last July and they are currently promoting the group through exhibits and creative merchandises.
The works of Maharlika Life marry traditional motifs in art, literature, history with timeless aesthetic. Baybayin in particular is often used as their motif and we were able to see some of their awesome Baybayin Project on display during the event. As you can see, even though it involves Baybayin scriptures, the prints were done in more like an abstract and very creative manner. According to him, his arts were merely inspired from Kanji of Japan. His previous work abroad has become an eye-opener to him that made him realized not to waste his talent for other country and utilized it to promote our very own instead. 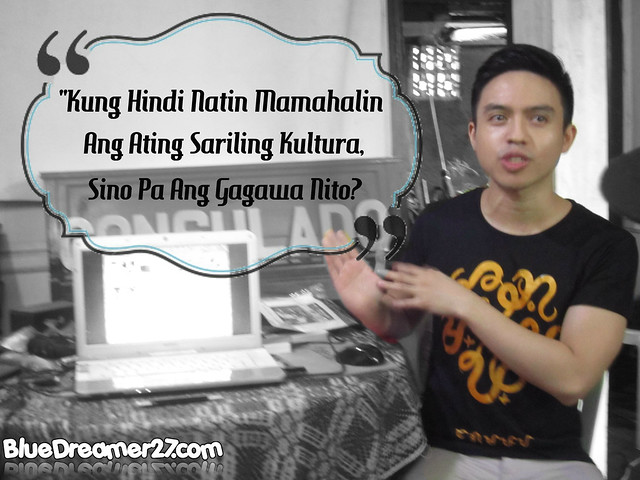 Lucero also emphasized things that an individual can do to ignite cultural renaissance. We can do so by championing our very own culture, appreciating the works of our people (Filipino has this “pinoy pride” mentality where we only appreciate someone talents if they only gained popularity abroad) and also the preservation of Identity. He also made reference to the so-called “Bover Codex” that proves that Filipino are already civilized even before the Spanish Arrives.
“Pamamaraang David : Daang KKB” (The Way of David : The KKB Method) 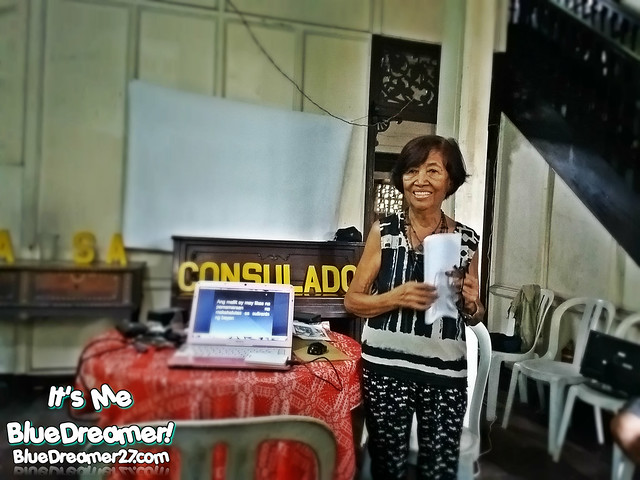 The second talk was led by Professor Teresita “Tess” Obusan, Phd. It is so nice to note that she came all the way to Daet Camarines Norte just to share her wonderful knowledge to us. Her topic is about the so-called “Pamamaraang David (the way of David), a method she and the rest of her Kapitbahayan Sa Kalye Bautista group used to promote and to educate those people in the lowest hierarchy of our society the importance or value of our very own culture and heritage. Professor Teresita Obusan which they frequently addressed as Tita Tess is the author behind books like “Roots of Filipino Spirituality”, “Mystic or Mistake:Exploring Filipino Mysticism in Quiapo”, and also a renowned scholar on Philippine Indigenous Culture and Baybayin.
Prior to her talk, a brief prayer was conducted accompanied by music (played via Nose flute by Mr Leo Castro. Professor Obusan shared her experiences and the challenges that she faced to promote her advocacy. She shared us her story and how much they struggle to bring Bahay Nakpil (another heritage site in Quiapo) back to its former glory and also the same challenge and effort that they offer to establish the KKB (Kapitbahayan sa Kalye Bautista). Her topic , however will emphasize more on how a small group of people and how small things can make huge difference in our society especially in resolving our nation’s problem. 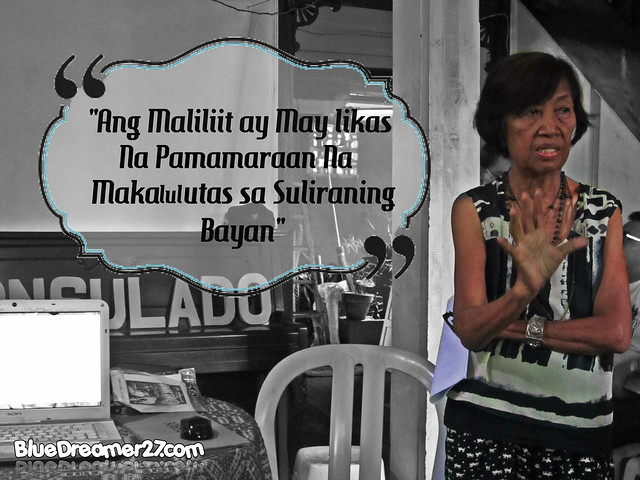 According to her, there are many small things in this country that can really make huge difference in our society yet they are often being ignored but  with combined efforts of the community, they can make something more triumphant much like what happened to our National Hero Jose Rizal and how he successfully published his book. I just learned that Rizal was able to publish his book with the financial support by his friends. The Kapitbahayan Sa Kalye Bautista (KKB) is a group that aims to promote cultural heritage to simple community. It may sound simple but it is actually challenging for them to encourage those people in lowest hierarchy of our society to have an interest with our culture. There was a time that they encouraged people to visit the National Museum but only few of them showed up and what makes it worse is that these people were restricted to enter because they do not wear proper attire. This is also the reason why she is commending National Musuem for letting people from all walks of life to enter the facility for free , an action that should have been done a long time ago. 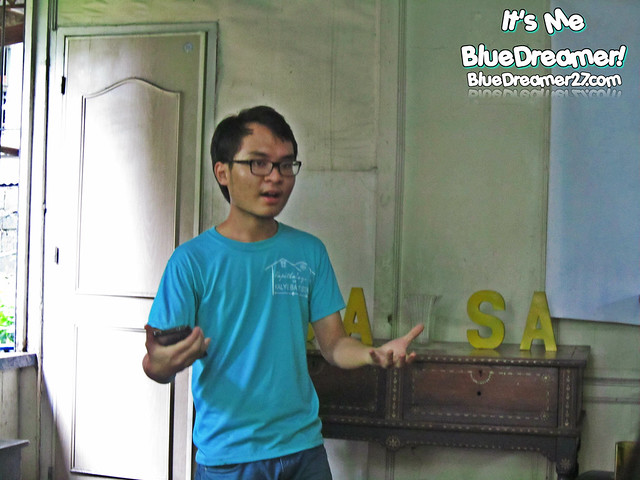 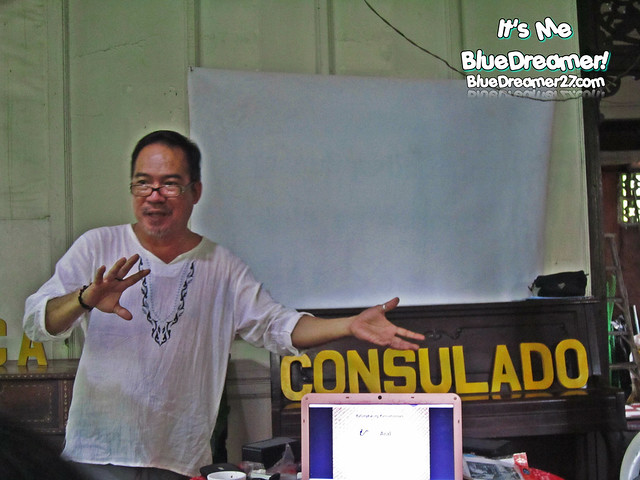 The third talk was led by Mr Leo Emmanuel Castro of Sanghabi (One Weave) group. Sanghabi is an organization that aims to strengthen Filipino identity by drawing from our very rich heritage. The organization is promoting our culture by conducting various workshops on indigenous music and dance, instrument making and ancient Filipino syllabary. Mr Castro and his works has been featured many times on tv and documentaries of local and international media and we were all grateful that he shared us his knowledge to us that day. His topic will emphasize more on the concept of the so-called “AUI” ng Malikhaing Paggawa (Creative works). AUI basically stands for A –Aral (Study), U –Unlad (Innovate) and I –Iral (Propagate). It is also interesting to note that A, U and I are the three vowels of Baybayin too!
So what is this concept all about? Mr Castro set out some examples of different creative works from different fields such Music, fashion, education, writing and more and how this concept is being applied (or should be applied) to each field. In creative writing for an instance, he told us that an aspiring writer should not really aim first on making a perfect novel or piece. You cannot just write a perfect masterpiece in an instant and this is where the concept of AUI comes in. It should all start first by studying. It is not necessary to come up with your own style. You can utilize all the resources that are readily available. You conduct research, adopt the style and learn from it. Once you learned enough, this is the time that you must take your skills to another level by innovating it. From there, you can now share and propagate your skills to others in many different ways! Ian Lucero’s Art is a perfect example of the effective application of this concept. He studied Baybayin, innovated his skill by creating his own style and propagating it with his Maharlika Life group. 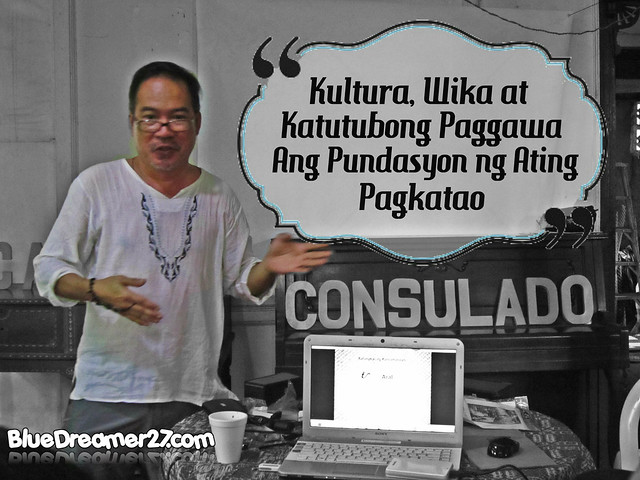 Mr Casto also expressed his disappointment with our music industry because instead of promoting our very own musical instruments our OPM industry are greatly influenced by the Western culture. Have you ever heard a music artists singing a song using our native instrument? You might have heard a few but none of them ever made it through the mainstream of Pinoy Music. This made me realized that maybe it is really our fault that our own culture is slowly dying, that our heritage is slowly being forgotten! It’s because we let ourselves to be influenced by other countries and we tend to ignore our own heritage. We tend to ignore the richness of our culture.
The lectures were followed by a quick lunch and then the Baybayin workshop led by Prof Reimon Cosare of Sanghabi which I will be posting on my next entry

Feel Free to check these Pages too! 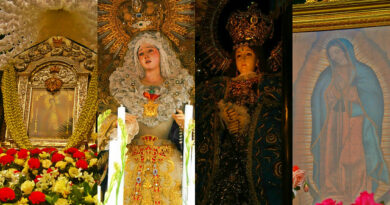