Manila is really transforming back to its former glory. We have witnessed a lot of drastic changes over the past years. Thanks to the efforts of Mayor Isko Moreno, Manila has successfully become a tourist-friendly city. Aside from the recently rehabilitated Jones Bridge in Binondo, a lot of historical sites in Manila received the same treatment as part of the local government’s heritage preservation efforts. Amidst the pandemic, they have managed to open new establishments and attractions in Manila last year. These include the newly renovated Lagusnilad Underpass and the KapeTolyo Coffeeshop. 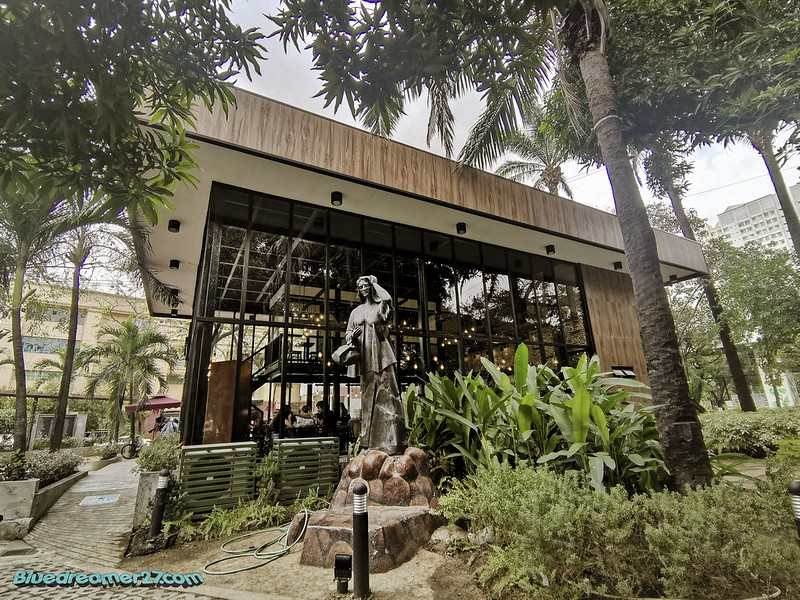 Just few walks away from the newly renovated Kartilya ng Katipunan monument is the modern yet eco-friendly looking Kapetolyo Coffeeshop.  The coffeeshop currently serves some of the country’s best homegrown coffee including the famous and well-acclaimed SGD Coffee from Sagada Mountain Province. Interestingly, KapeTolyo by SGD is a pet project by Mayor Isko himself. The coffeeshop is owned and managed by Rich and Margaret Watanabe, the same people behind the SGD Coffee Roastery in Greenhills and SGD Bodega in Quezon City. This means that KapeTolyo by SGD is also part of the meaningful Coffee Heritage Project that aims not just to promote Sagada’s heritage coffee but also to help the smallholder coffee farmers. 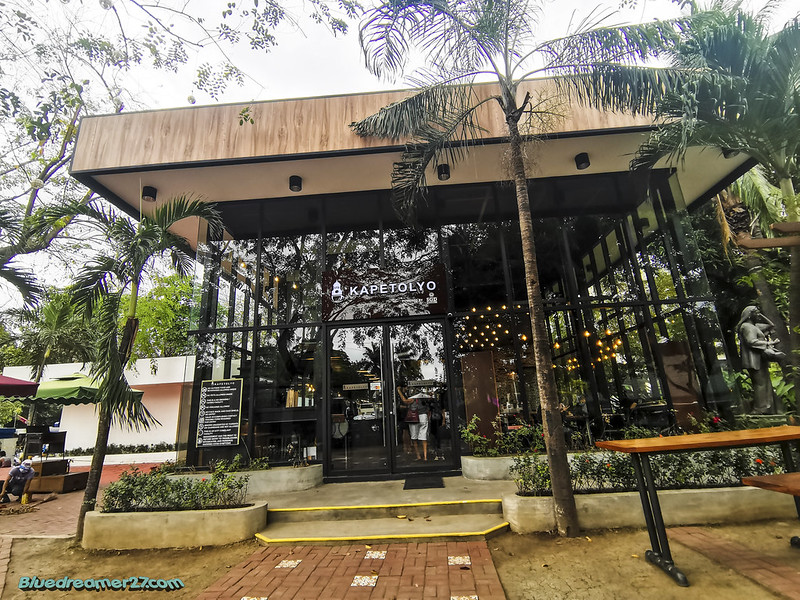 KapeTolyo by SGD is a place that will definitely not go unnoticed! Aside from the fact that this coffeeshop is strategically located at the heart of the newly renovated Kartilya Park and just few steps away from SM Manila, Kapetolyo comes with a unique and eye-catching design. Designed by city architect Ali Bahoy, KapeTolyo offers with a contemporary and minimalistic approach. The establishment is adorned with tall glass walls that allow visitors to see the picturesque view of the Kartilya Park especially by night when the park is illuminated by warm Capiz lights and colorful water dancing fountain in front of the Bonifacio Shrine. 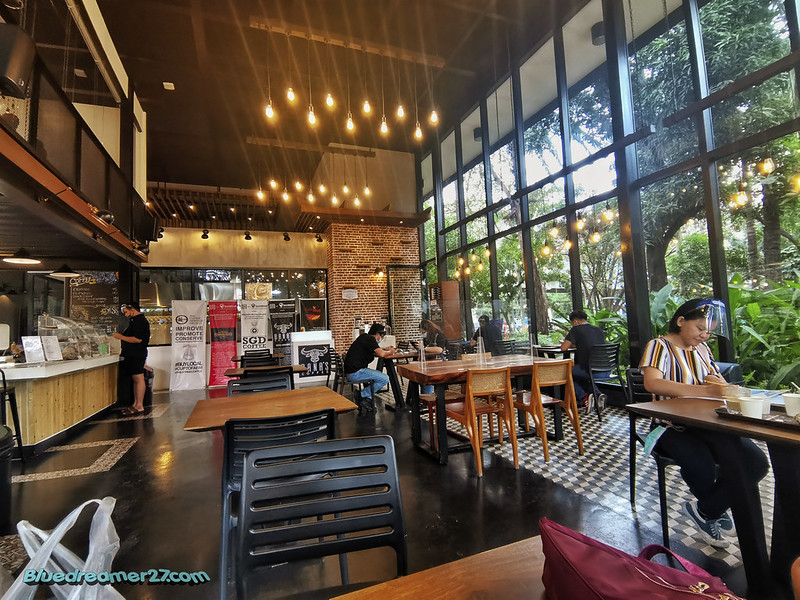 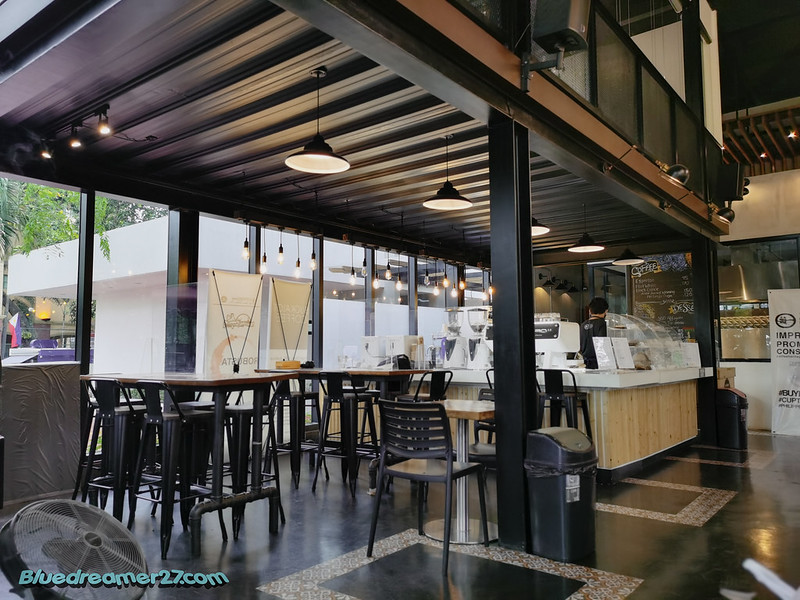 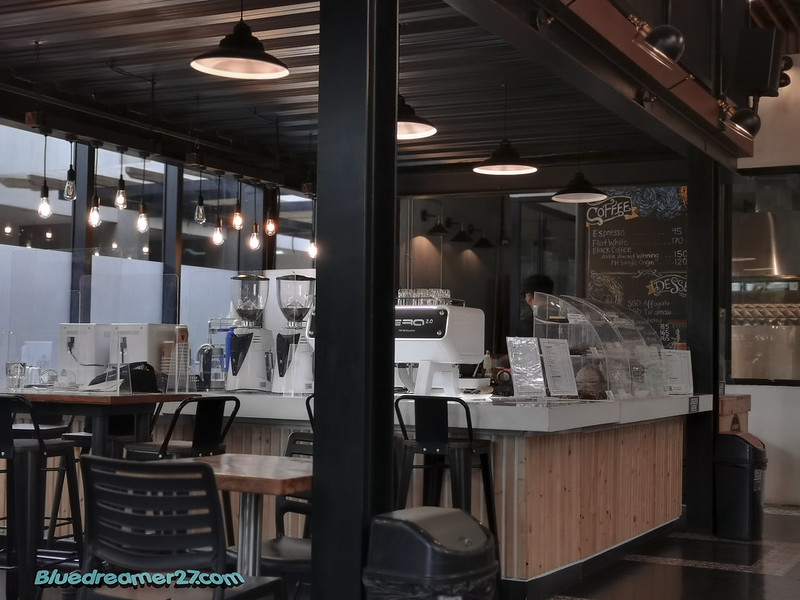 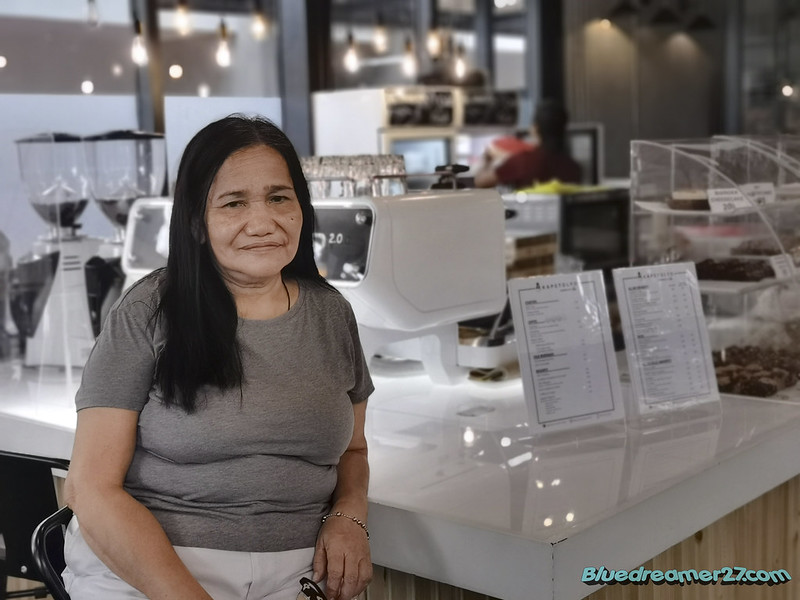 The interior is equally attractive. It also comes with contemporary and minimalistic approach. It offers a nice rustic contemporary style with high ceiling and a small balcony to accommodate more customers. The coffeeshop is also regularly organizing special music events too. 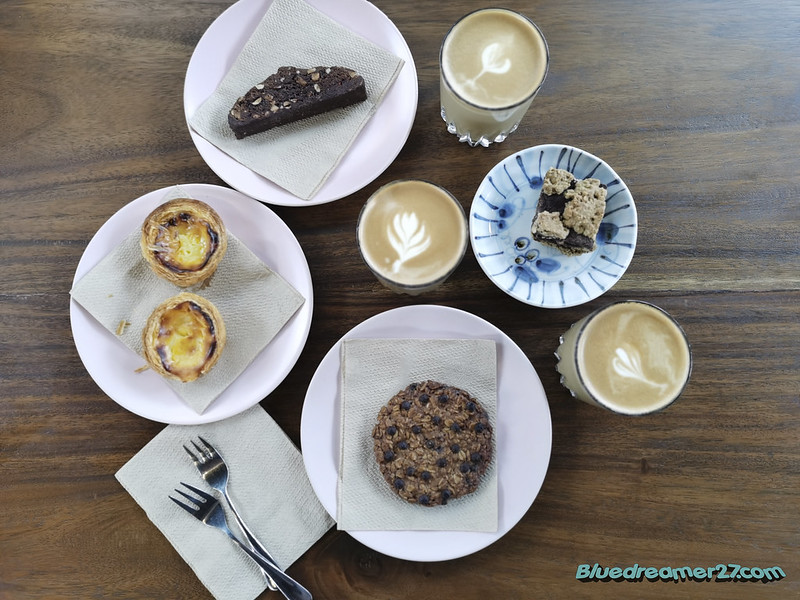 I was actually aiming for an Iced Coffee when we get there but we were informed that they were only offering hot-based beverages at that moment (they do have cold beverages on their menu though).  The shop offers a collection of homegrown coffees, a great number of pastry dishes, pasta, salads, sandwiches, starters, all-day breakfast meals, and desserts. 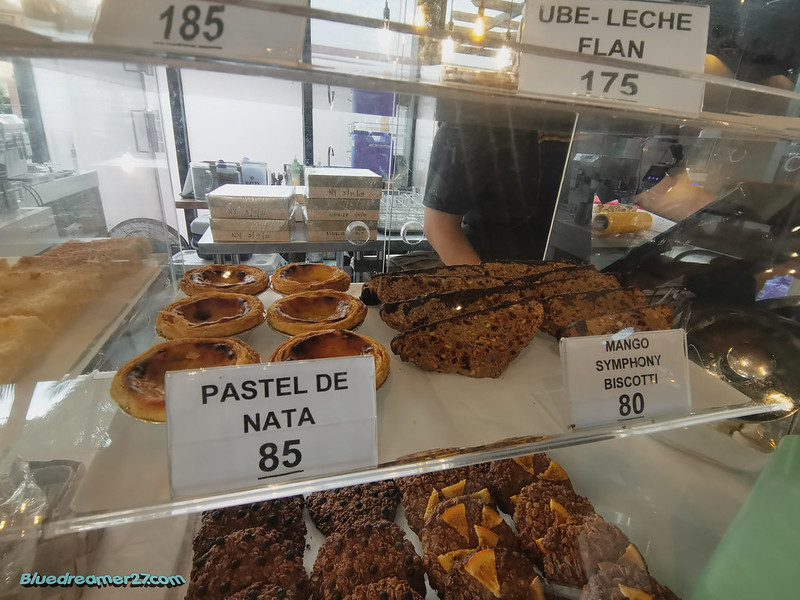 They offer some tasty biscotti, cookies, and cakes to compliment your coffee. If you are looking for a bigger meal, they got toasts, wraps, salads and sandwiches that could range from Php180 to Php300. They also have a collection of pasta dishes with prices ranging from Php230 to Php330. I can say that a budget of Php600 is already good for two. 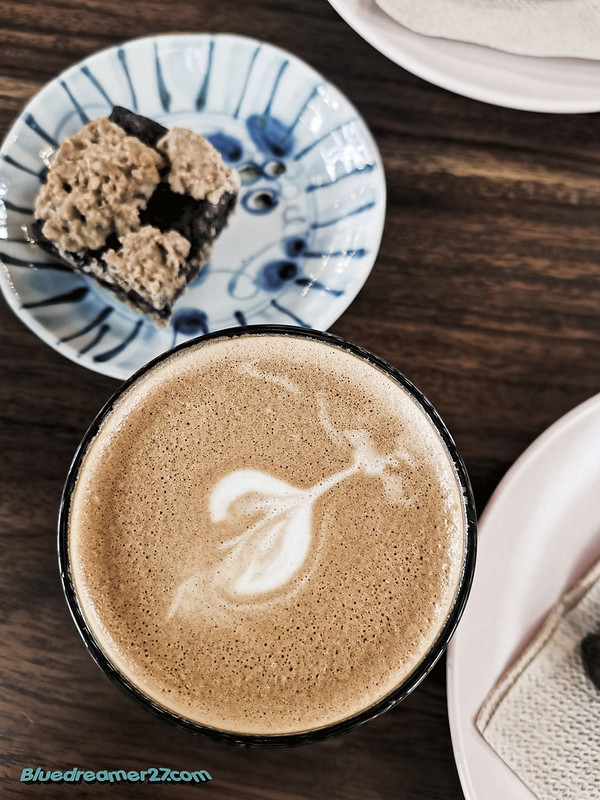 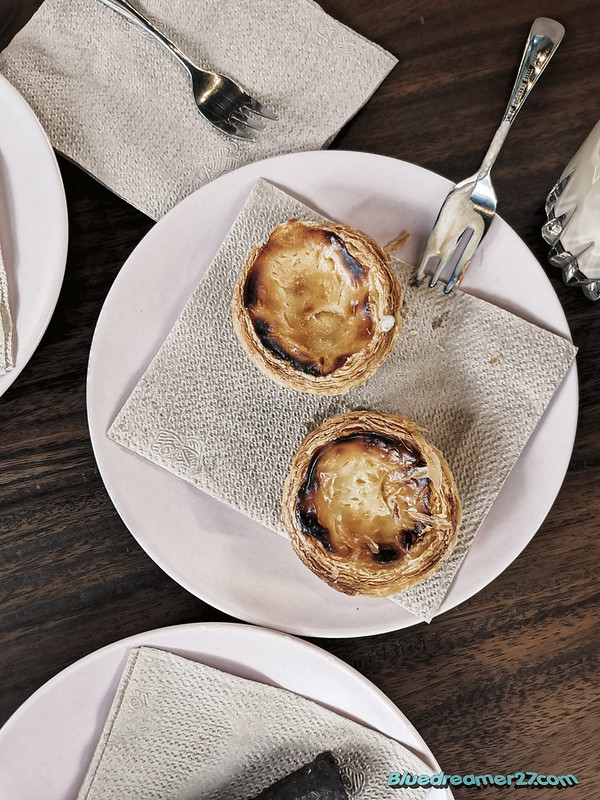 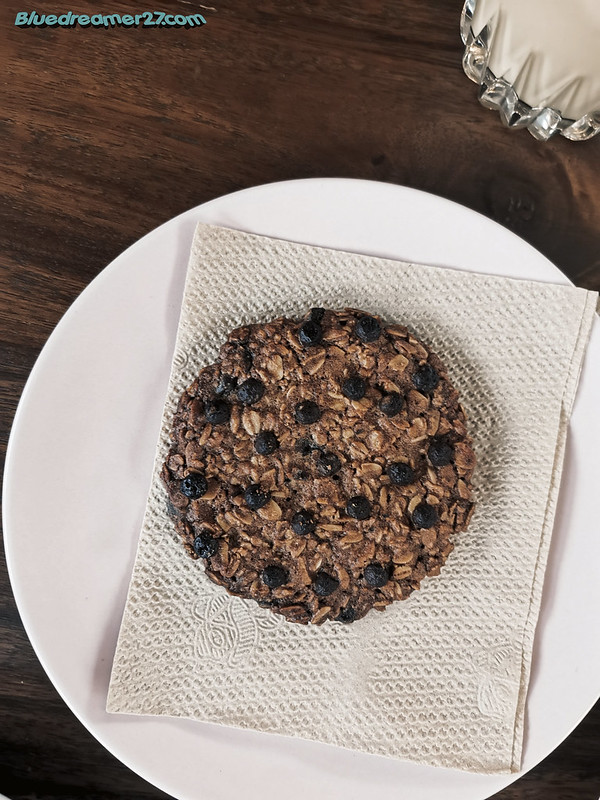 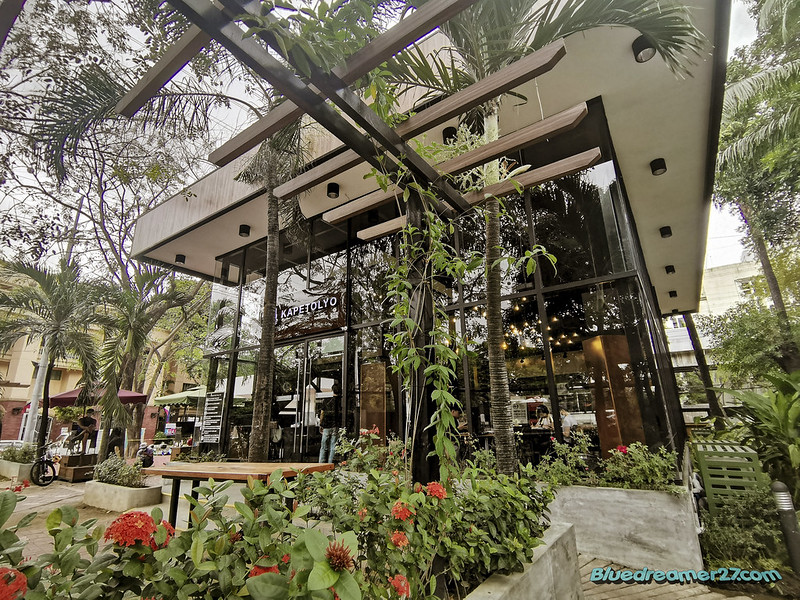 KapeTolyo by SGD is an IATF-Compliant establishment. They do more than just simple inspections before you enter the building. Aside from implementing all the basic and standard health protocols (wearing of facemask, temperature check, sanitation), the building is equipped with modern tools to secure the safety of their customers. These include the UVC Disinfection Lamp, a Walk Through Sanitizing Mist that you have to pass through before entering the shop, a daily filter disinfection of their air-conditioning units, and high-end ventilation system. Unfortunately, due to the recent ECQ announcement, the shop is temporarily closed to public til April 4, 2021.

Areas to Visit Near the KapeTolyo

Berlin Wall Fragment 22
Before or after visiting the KapeTolyo by SGD, make sure not to miss some of the new and old attractions near the building. Just few walks away from the establishment, you’ll find the fragment of the Berlin Wall on display. This portion of the Berlin Wall called “Mauerteil,” is the 22nd of the wall’s 40 sections. It stands 3.65 meters tall and 1.2 meters wide, and weighs 2.8 tons. Several sections of the Berlin Wall were sent to different cities all over the world during state visits since the Wall came down in 1989. 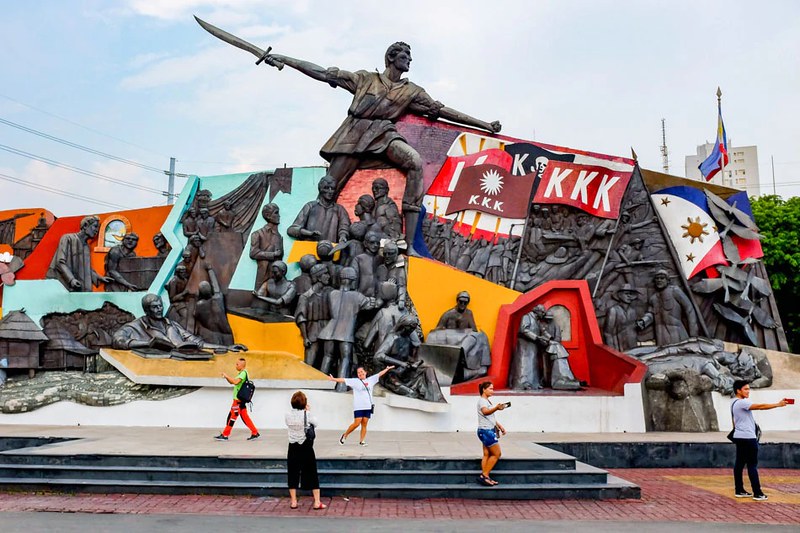 The Kartilya ng Katipunan Monument
Located at the heart of the part is the newly renovated Kartilya ng Katipunan monument or more popularly known as the Bonifacio Shrine. The monument 13.7 m (45 ft) in height with symbolic images and other features known as the “Cry of Balintawak” is acclaimed as one of the best monuments in the world. The Bonifacio Monument, which was sculpted by Guillermo Tolentino in 1933

The Kartilya Park
The plaza itself is already a place worth-visiting. The newly rehabilitated Kartilya Park now offers a more beautiful landscape adorned with greeneries. By night, the park is warmly illuminated by Capiz lights. There’s also a dancing water fountain in front of the monument. 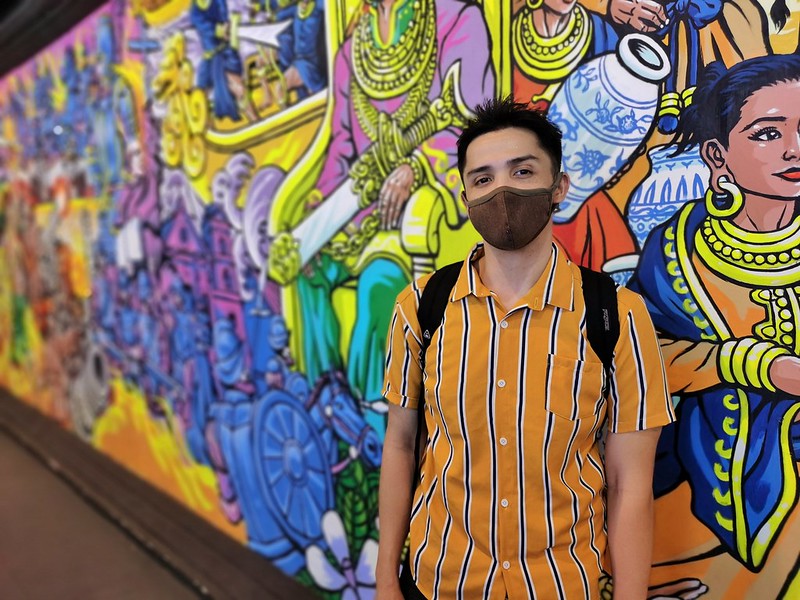 Lagusnilad Underpass
The newly renovated Lagusnilad underpass offers a collection of colorful and historically significant murals by Gerilya. It depicts various events related to Manila including the famous Feast of the Black Nazarene, Rizal Execution, People Power Revolution, and many more. There’s also a secondhand bookstore for book lovers. Beautiful Vacations Everyone Should Do at Least Once