Let’s Explore Manila : A Journey To The Past ~ Intamuros (Part 1) 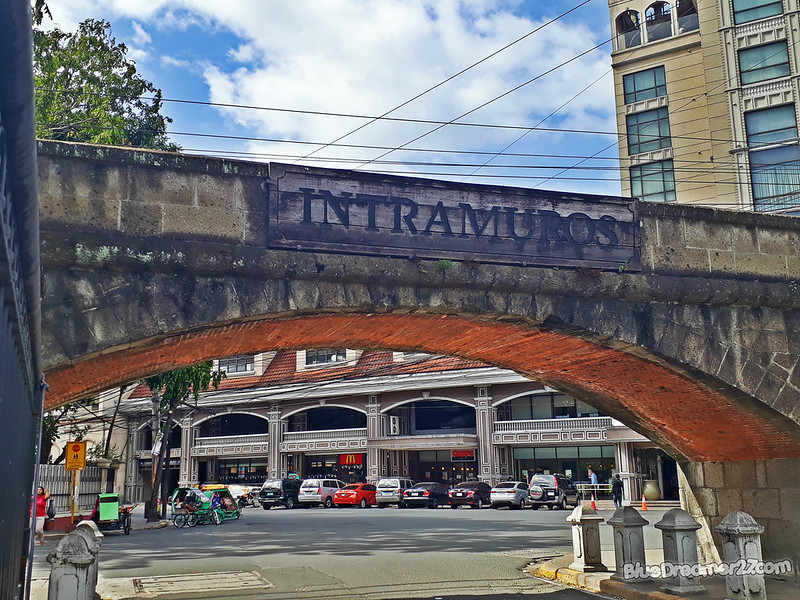 I used to pass by Manila area when I was working in Makati and Pasig but I realized that I never really get the chance to explore this place. It’s very interesting that I used to travel far yet Manila alone has many interesting places to offer. So when a friend offered me a free staycation in a budget hotel in Manila, I grabbed that opportunity to explore the place and it finally give me the reason to tour around. The first destination I came up with is the historical walled city of Intramuros. It has been on my travel list for a long time. We used to be here every December for the Intramuros Grand Marian Procession but never got the chance to explore the place in full extent. 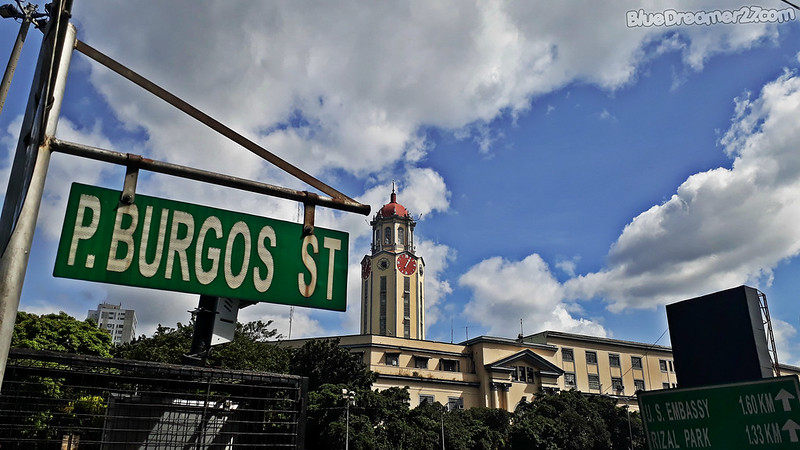 Intramuros is actually  a  Spanish term which means “Within the Walls” and as what the name suggests, Intramuros is a city that is strategically designed with defensive walls. The Spanish government built the walls on the late 16th century to protect the city from foreign invasions. The place however suffered great damage during the Battle of Manila in 1945. In 1951, Intramuros was declared a historical monument and Fort Santiago, a national shrine and there were numerous attempts to restore the place.  Although you see the efforts made to bring the place back to its former glory, the Global Heritage Fund identified Intramuros along  with other 11 world heritage sites as one of those on the verge of  irreparable loss and destruction.  Despite of it, Intramuros and its Spanish-era atmosphere is still not fading. You can still spot areas in this place that will seemingly take you back in time! 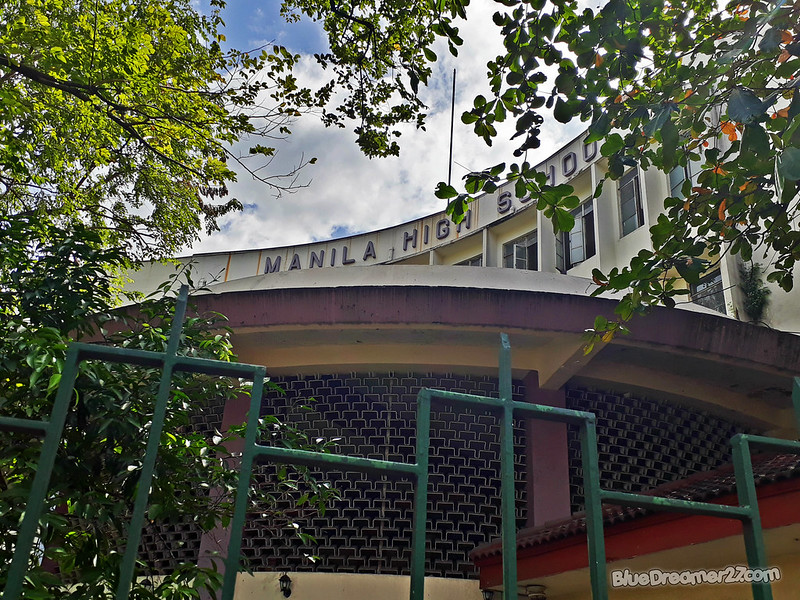 Manila High School
The first old establishment that welcomed us upon entering Intramuros (via Victoria St) is the Manila High School.It was opened in 1906 and is considered as the first ever public high school in Manila. Prior to it, it was once a site of Parian de San Jose (1783 -1860) and Escualla Municipal De Niñas (the first public elementary school for girls in 1889) until it became the Manila High School in 1906. The name was changed to Manila South Highschool in 1921 and Araullo High School in 1930. Much like the rest of the building within Intramuros, the school was utterly detroyed during the Battle of Manila and was revived in 1958. 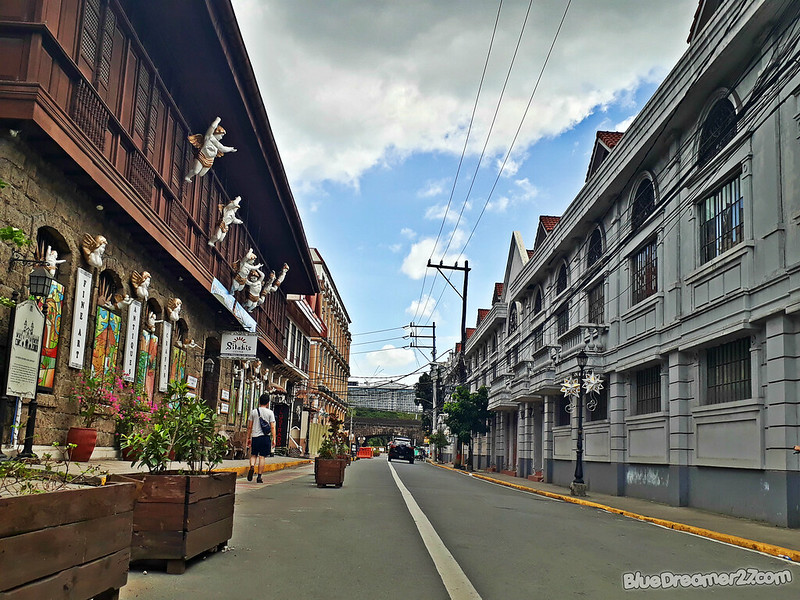 General Luna St
If you pass by the General Luna St, you will encounter some notable  Spanish-influenced architectural buildings including the well known Silahis Arts and Crafts. Silahis is well known for being one of the popular sites in Intramuros where you can buy souvenirs. The shop caters wide range of Filipino handicrafts and folk art pieces. It also houses a museum displaying huge collection of antiques, jars, fabrics and maps (you can actually buy the Food Wok Map here which could be very useful if you ever consider exploring Binondo – Check A Trip To Binondo). General Luna St is formerly known as the Calle Real del Palacio and it gives you access to different main attractions in Intramuros. 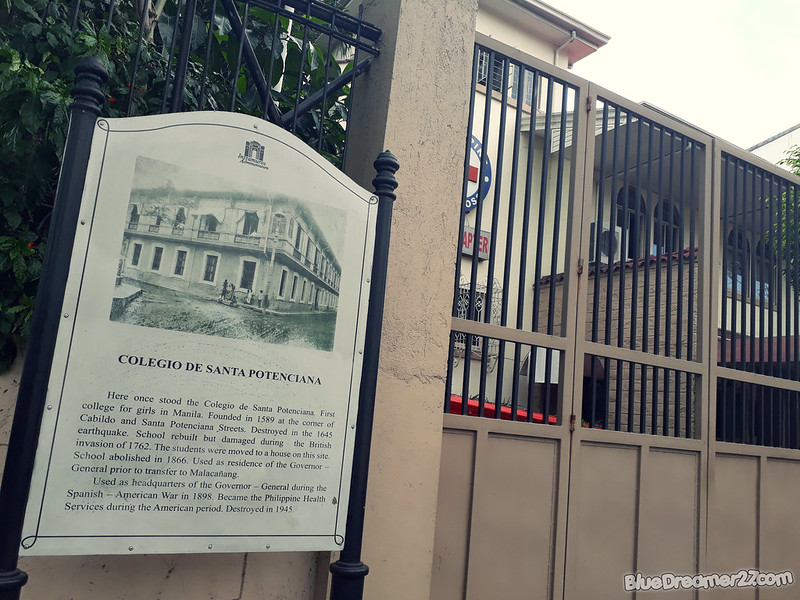 The Old Colegio De Santa Potenciana
One thing I love about Intramuros is the fact that despite of many areas to explore, you actually don’t need any tour guides. Most buildings whether new, abandoned (ruins) or old houses have historical markers nearby to educate the tourist but if you are not fond of walking, you can either avail those historical tour offered by sidecar drivers for Php100-250 or better yet try the Kalesa tour for Php350-500. Anyway, another building that took my attention during our tour is the Philippine Red Cross Intramuros Chapter. It’s a new building and there’s no longer a sign of Spanish Era but what stood here before is the Colegio De Santa Potenciana, the first college school for girls in Manila and was founded in 1589.  The building which also became the headquarters of Governor-general during the Spanish-American War was also utterly destroyed during the Battle of Manila. 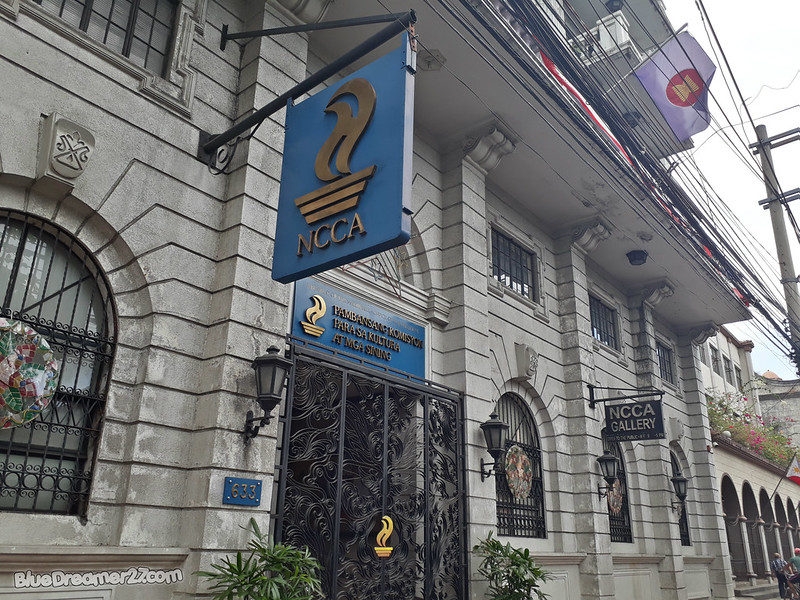 NCCA Gallery
Also in General Luna St, you’ll find the main headquarter of National Commission of Culture and Arts. was created through Republic Act No. 7356 signed on April 3, 1992, by then President Corazon Aquino. The office usually holds galleries and art exhibits. NCCA Gallery is open in general public and it’s free admission. The Gallery is open every Mondays to Thursdays from 8 am to 5 pm and is open on Friday by Appointment. 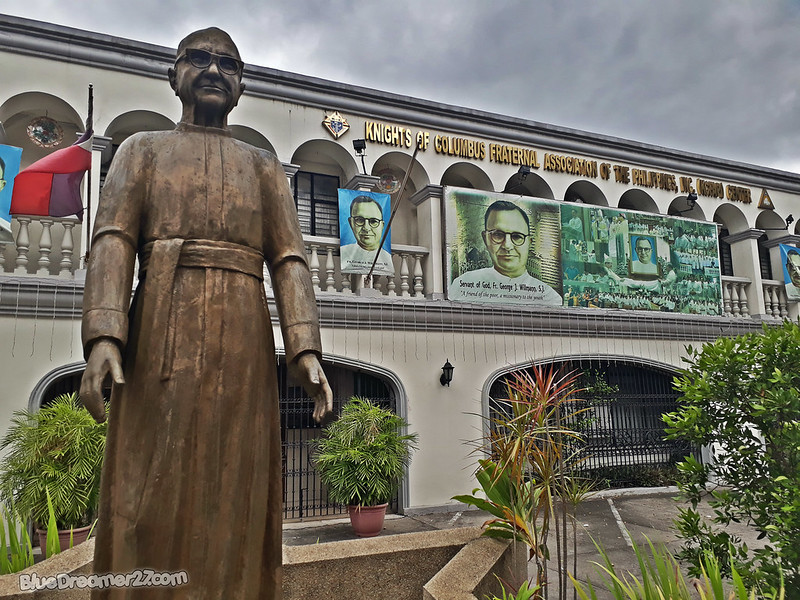 Knights Of Columbus Fraternal Association of The Philippines (KCFAP) Center
As a member of another mandated organization of Catholic church, i am very much aware of the KOC or Knights of Columbus organization and I’m actually thinking of joining them someday. It is very interesting to note that their main headquarters can be found in Intramuros as well. It also houses Fr George Willmann Museum which is open for general public with free admission. The museum is open from Mondays to Fridays from 7:30Am to 4:30pm. Just in case you don’t know, George Willmann is the father of Knights of Columbus in the Philippines. he became a Filipino citizen  due to his missionary work in the Philippines. 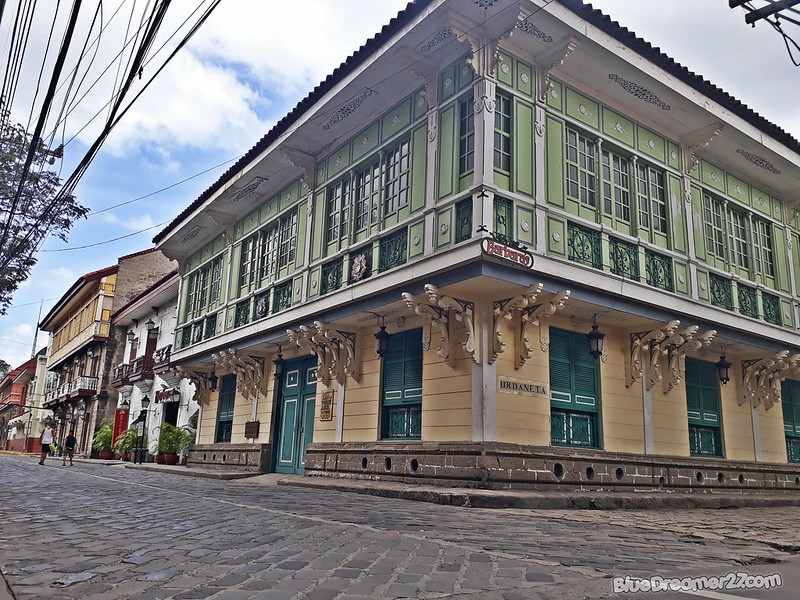 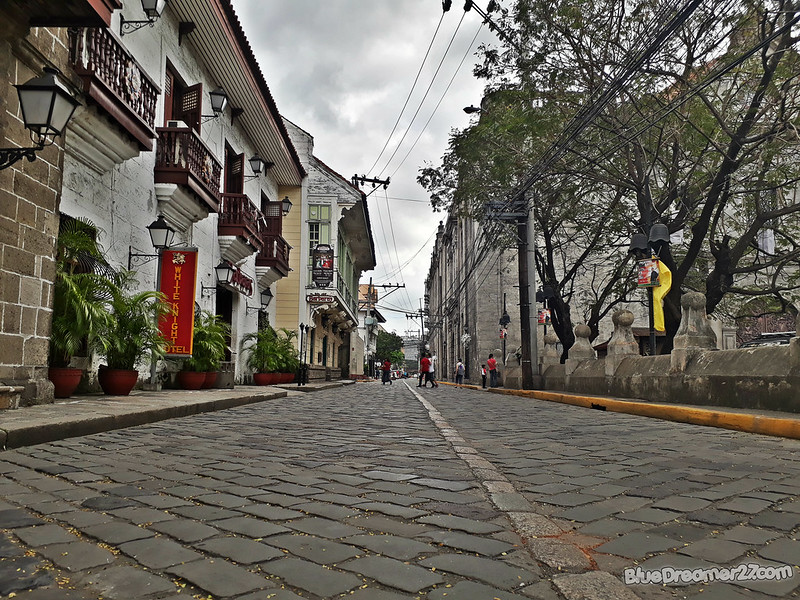 The Cobblestone Streets
If you think that only Vigan has that famous Cobblestone Streets, well, you do not have to travel that far because Intramuros has its own version of Calle Crisologo. Particularly in the area of General Luna St cor Urdanetta (just few walks away from San Agustin Church and Casa Manila), you will be treated with a very amazing Spanish-era atmosphere. Old buildings and cobblestone streets with Calesa passing by from time time, what a very picturesque view indeed that seems to take you back in time. 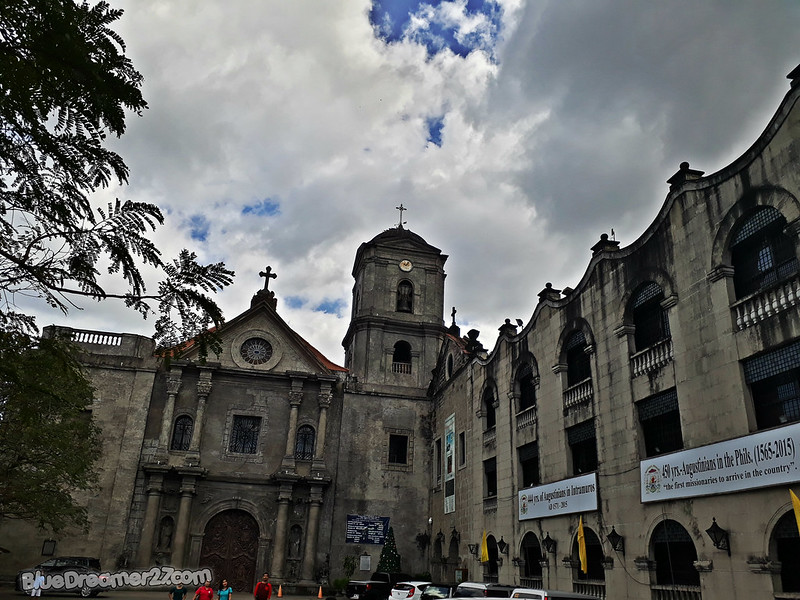 San Agustin Church
Did you know that out of the seven grand churches in Intramuros, only the San Agustin church managed to survive the Battle of Manila? The Manila Cathedral was actually destroyed during the war but was later revived.  The present edifice was built in 1587, and completed, together with the monastery, in 1604. It was named as one of the Historical landmarks of the Philippines in 1976. It also houses an ecclesiastical museum. The museum is open daily from 8am to 12pm / 1pm to 6pm. The entrance fee to San Agustin Church Museum is Php200 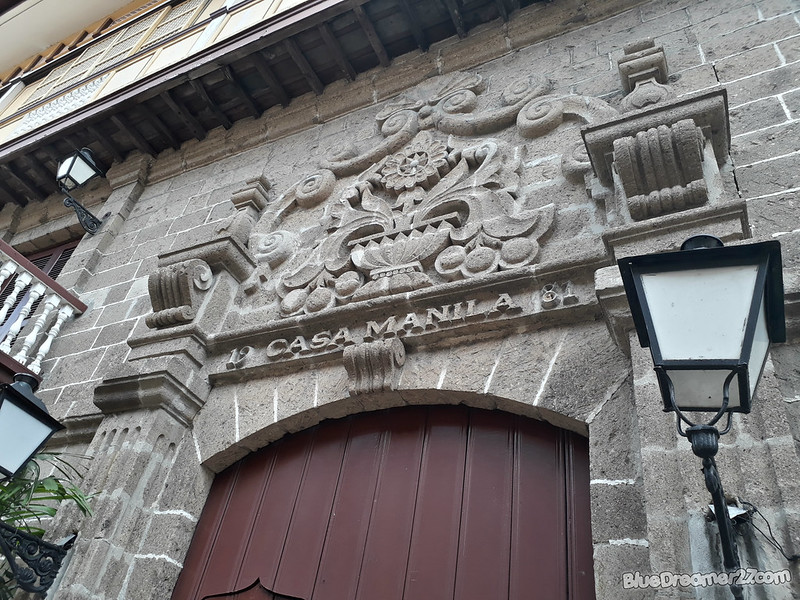 Casa Manila
Casa Manila is another interesting places to visit in Intramuros. The museum is the imposing stone-and-wood structure c. 1850, one of the grand houses in Barrio San Luis (one of the four original villages of Intramuros) is located across historic San Agustin church and bounded by Calle Real, General Luna, Cabildo and Urdaneta streets. Casa Manila is open every Tuesdays to Sundays from 9am to 6Pm with an admission fee of Php75 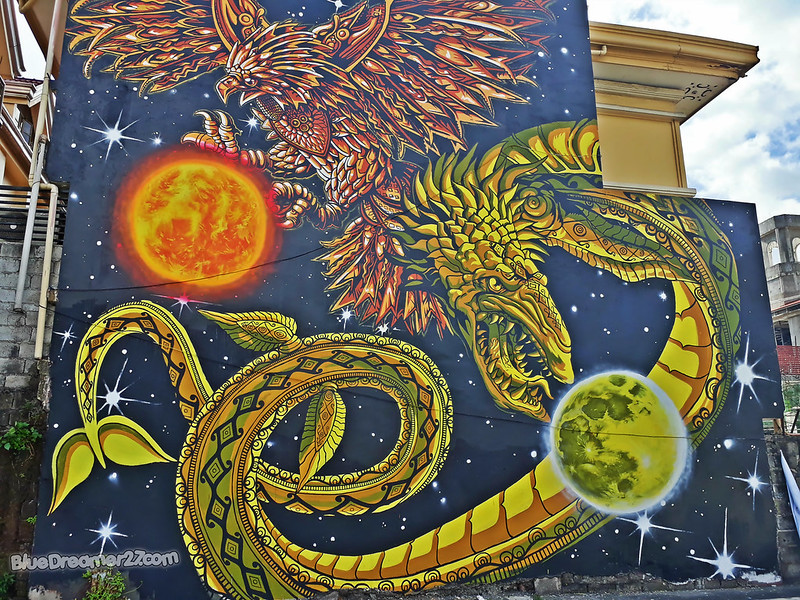 “Ang Bakunawa at ang Minokawa” Mural
Dragonball? Nope it’s not! This huge mural (street art) which can be found  from the parking lot on Gen. Luna Street corner Anda Street (just beside the CBCP Compund). 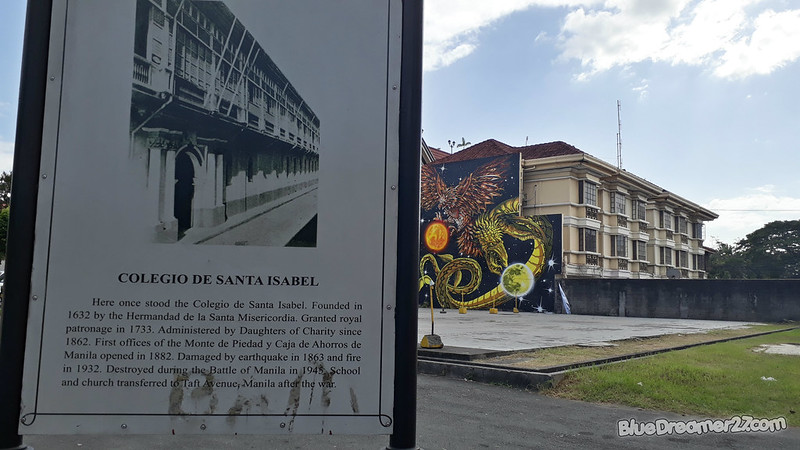 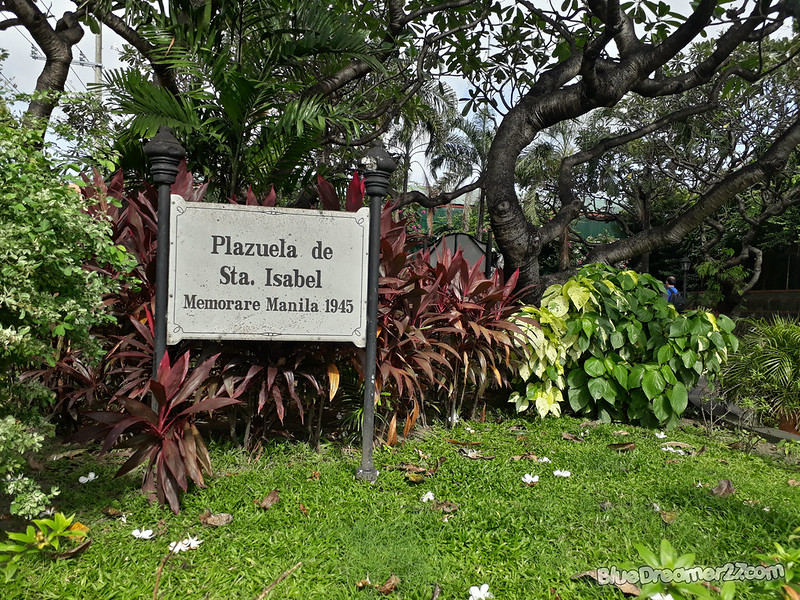 Plazuela De Sta Isabel
The Plazuela de Santa Isabel is one of the lesser known attractions in Intramuros. It was made part of the Santa Isabel College, a small adorned with luscious greens and colorful flowers. 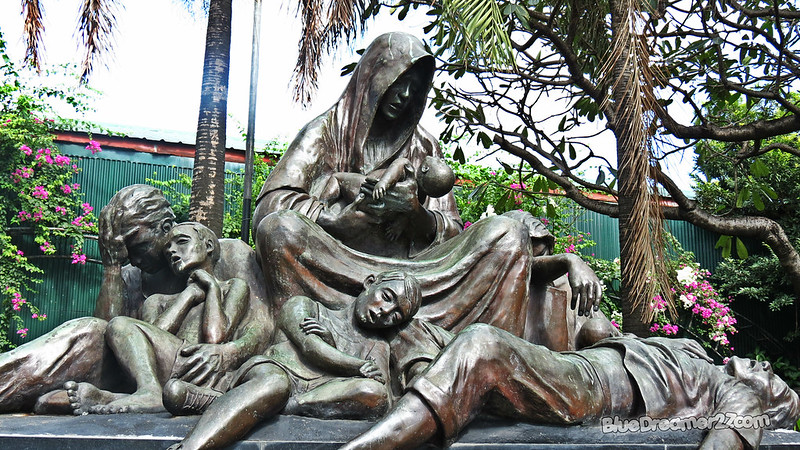 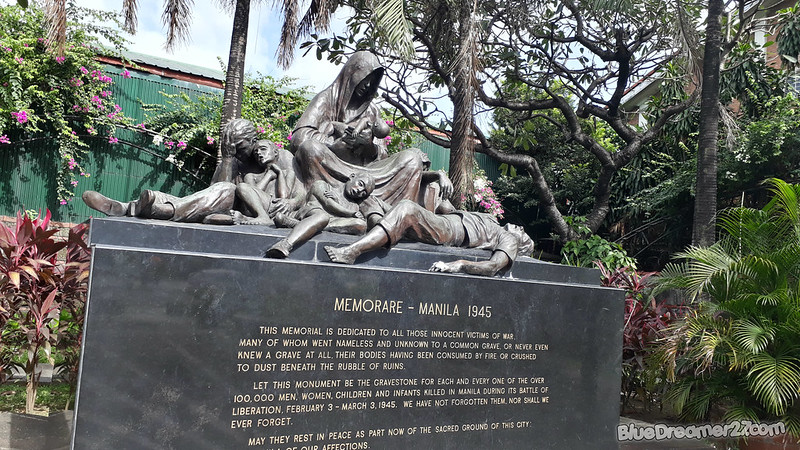 One of the highlights of this place is the Memorare sclupture by Peter De Guzman. It depicts a weeping woman holding a dead infant which symbolizes the lost hope. It also features an image of a woman who has been raped, dead young boys (symbolizing the lost of youth in the country) and a dead man (represents elderly who caught up in the battle). Generally, this eerie and heartbreaking imagery is dedicated to the innocent victims of war. 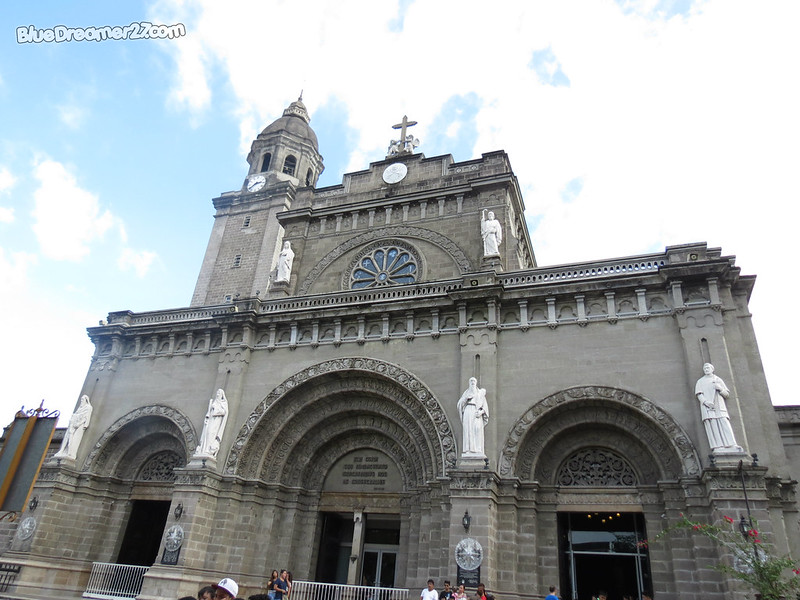 Manila Cathedral
I think a trip to Intramuros will not be completed without passing by the Manila Cathedral or the Minor Basilica of Immaculate Conception.  The 445 year old Basilica is dedicated to Our Lady of Immaculate conception, the Patroness of the Philippines. The church underwent numerous restoration and renovation all through out its years as it was utterly damaged and destroyed several times due to natural calamity and during the world war. The church was mercilessly destroyed during the Battle of Liberation in 1945.  The ruins of the church remained on site and the restoration took place in 1954 . (Check: Minor Basilica of Immculate Conception / Manila Cathedral) 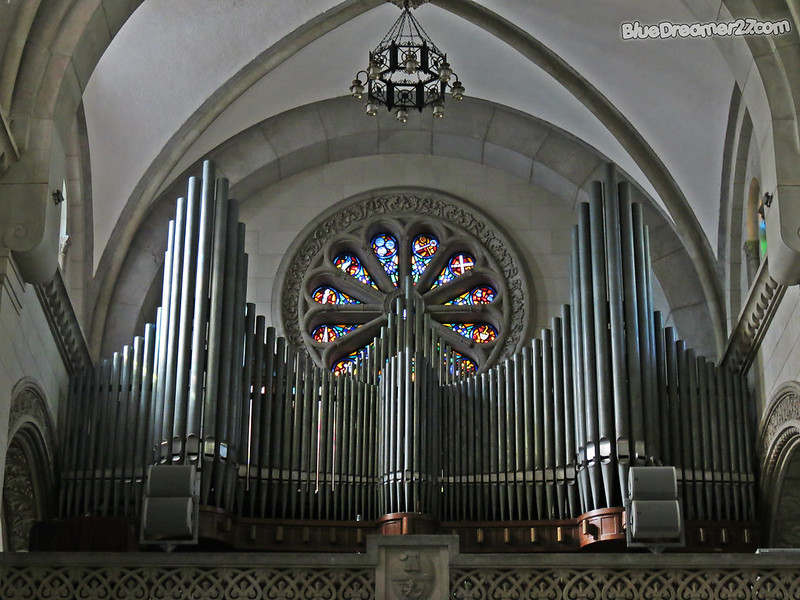 The pipe organ of Manila Cathedral, it is considered as the biggest pipe organ in the country and possibly in South East Asia with 70 stops and 4 manuals and pedal. 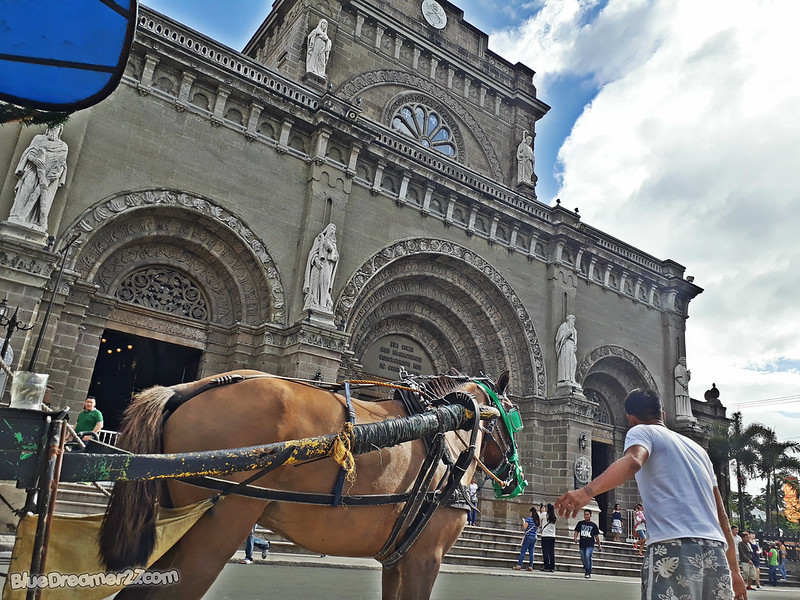 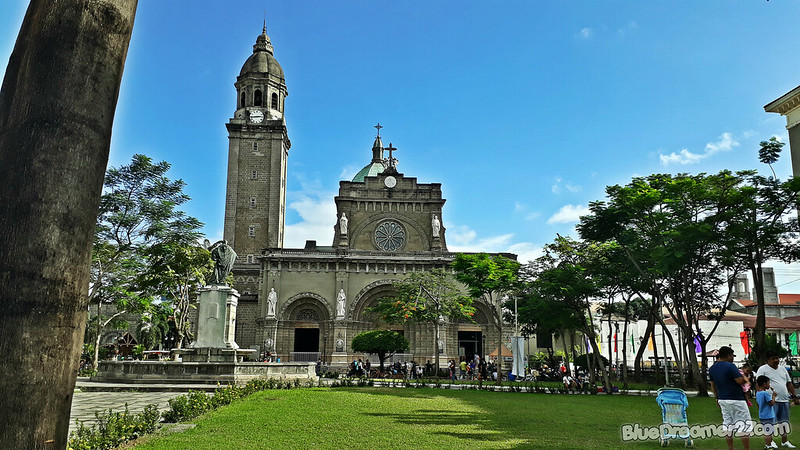 Plaza De Roma
Just in front of the Cathedral is another spacious park/plaza, the Plaza De Roma. It is formerly known as Plaza Mayor. The place was converted into a park in 1797. It was also renamed as Plaza McKinley after the late US President then changed Plaze De Roma in 1961 to honor the Sacred College of Cardinals in Rome. 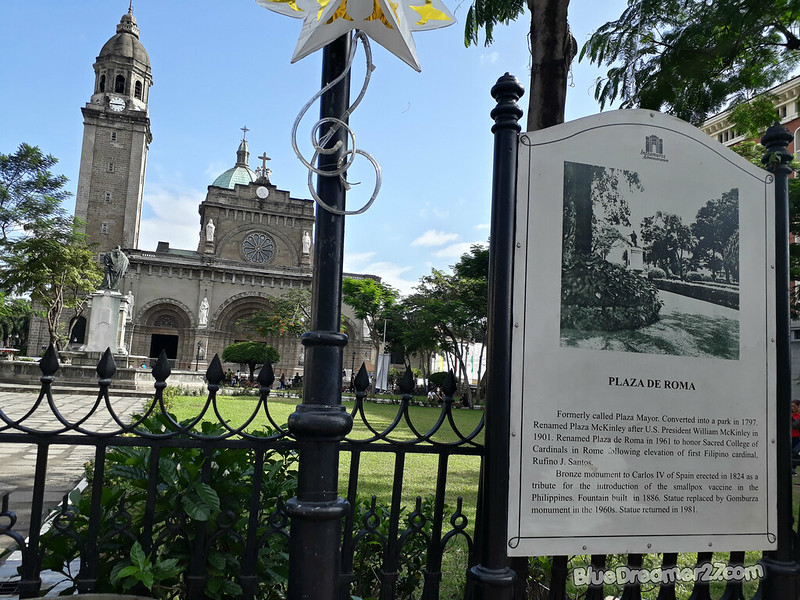 At the heart of the park likes an elevated statue of Carlos IV of Spain. Erected in 1824 as a tribute for the introduction of the smallpox vaccine in the Philippines. 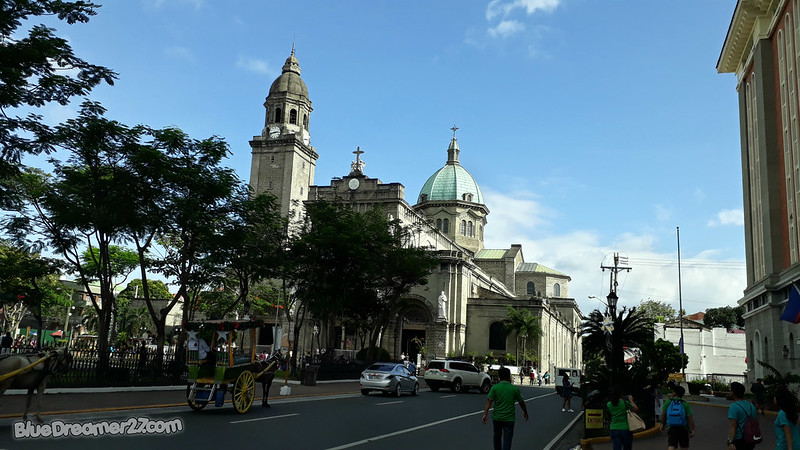 This is all for now, the second part of my Intramuros journey will be up on my next #LetsExploreManila entry

Exploring Intramuros could be very tiring and exhausting and it could be extremely hot as well. Better bring light and wear light and refreshing clothes. I also suggest to wear shoes designed for prolonged standing and walking. You can check NicerShoes and see which shoes fit such kind of long day activity!

What is Casino Tourism? Casino tourism explains the relationship and the effect different countries and their economies have in terms of the casino industry. This is a huge part of