[Movie Review] IT : Chapter One

They said that Fear could be an acronym that has two meanings. It could be “Forget Everything And Run” or “Face Everything And Rise“. A coward like me will always pick the first choice but after watching IT movie few days ago, I think i might have to change my mind. 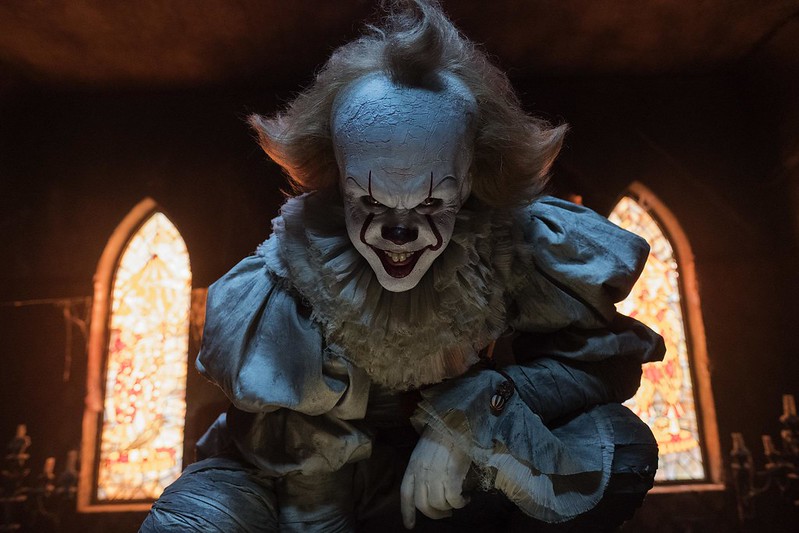 Yes, the much awaited Stephen King‘s masterpiece is back. It has conquered the small screen back in the 90s and now, Pennywise will make his way on the bigscreen turning our childhood fears back to life! If Annabelle : The Creation made us all scream because of the overwhelming amount of jumpscare scenes, IT offers a different kind of thrill and emotion. At some point, you will find yourself laughing but most parts are terrifyingly creepy.

It is basically a period film set in late 80s which took place in Derry, a fictional town in King’s novel where most of the stories have occurred including Insomnia and Dreamcatcher. It follows a story of seven outcasts kids, each has different issue. They were all terrorized by a certain creature which comes in form of a creepy dancing clown and called himself “Pennywise“, a character that is brilliantly played by Bill Skarsgård. With creepy voice and creepy gestures, this clown will give you nightmares for days! 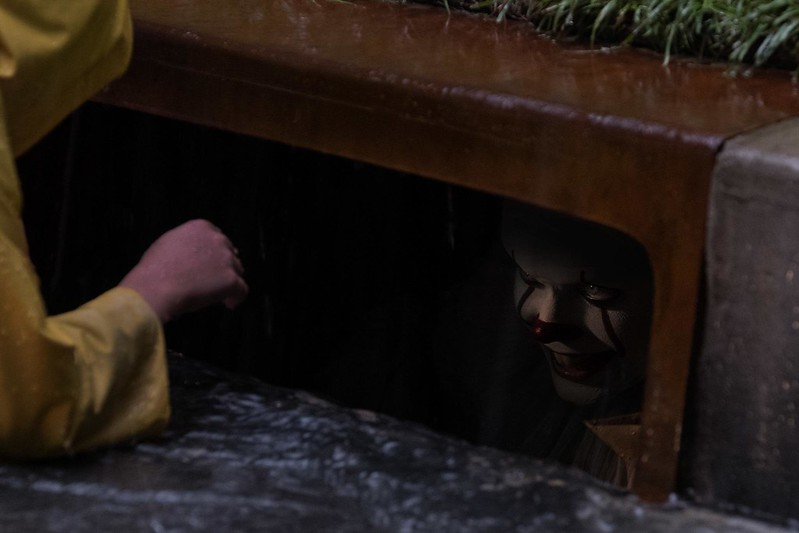 Photo Credit: Warner Bros Pictures
The Iconic Drain Scene
Pennywise the dancing clown can change himself in many forms depending on what kids are afraid off. He feeds off fear from kids and yes, he literally eat kids which makes this creature even more terrifying. The movie will actually welcome us with that iconic scene of Georgie, a young kid playing with his paperboat in the rain when the boat suddenly sink down the storm drain. There he finds Pennywise the clown trying to tempt him to get his paper boat from him but then it ended up in a brutally surprising scene! Seriously, I saw the original trailer prior to the film and I was not expecting it be as gory as this one. 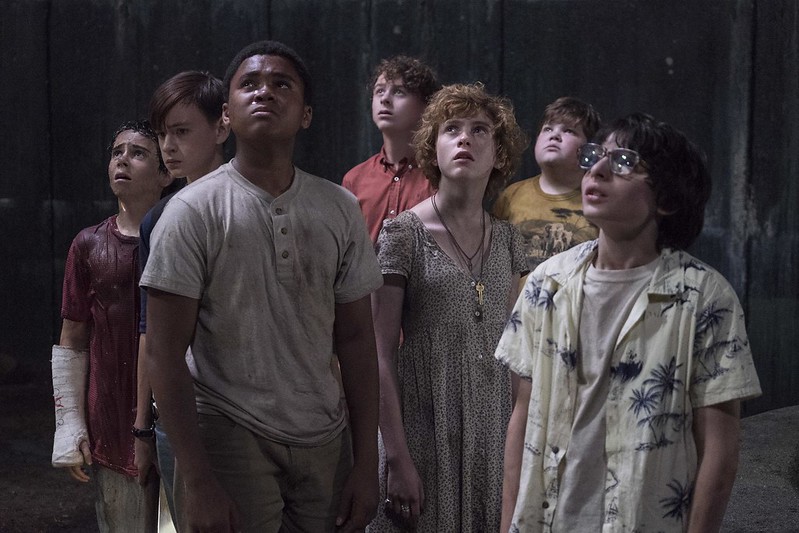 Photo Credit: Warner Bros Pictures
The Losers Club
Call them the Losers Club but the actors in this this movie are the strongest point which makes this remake even more awesome and worth watching. I was so disappointed when Carrie (the remake) failed to deliver the same impact it did back in the 80s but IT is surprisingly worth watching and the actors gave enough justice to their respective characters making this coming-off-age movie absolutely enjoyable. The Losers Club is made of 7 kids including Bill Denbrough(Jaeden Lieberher), Ben Hanscom (Jeremy Ray Taylor), Richie Tozier (Stranger Thing’s Finn Wolfhard), Stan Uris (Wyatt Oleff), Mike Hanlon (Chosen Jacobs), Eddie Kaspbrak (Jack Dylan Grazer) and Beverly Marsh (Sophia Lillis). All gave a remarkable performances not to mentioned those comical scenes that are simply hilarious to watch despite being a horror film. Richie and Eddie are both my favorite characters from this movie. Their non-stop arguments and discussions is one of the best parts of this horror movie, an effective comical relief.

The movie in general will remind us all of our childhood fears and how we managed to deal with them as we grow up. When I was a kid, I’m afraid of being the only one awake at night and that someone is hiding under my bed. If I was there in Derry, Pennywise will probably use that weakness to capture me and make me FLOAT with him. This is probably why IT is an effective horror movie. It is not just about jumpscare or being a gory slasher because the idea of a creepy dancing clown that can manifest itself in many forms based on our fear is just brilliantly crafted to the audience mind. Not to mention the nostalgia that this period film has brought (they gave nod to some 80s pop culture like The New Kids in the Block and even Nightmare on the Elm Street). With an effective casts and amazing portrayal of Bill as Pennywiser, it is not really surprising why this film has received praises from its critics and is now a block buster hit. 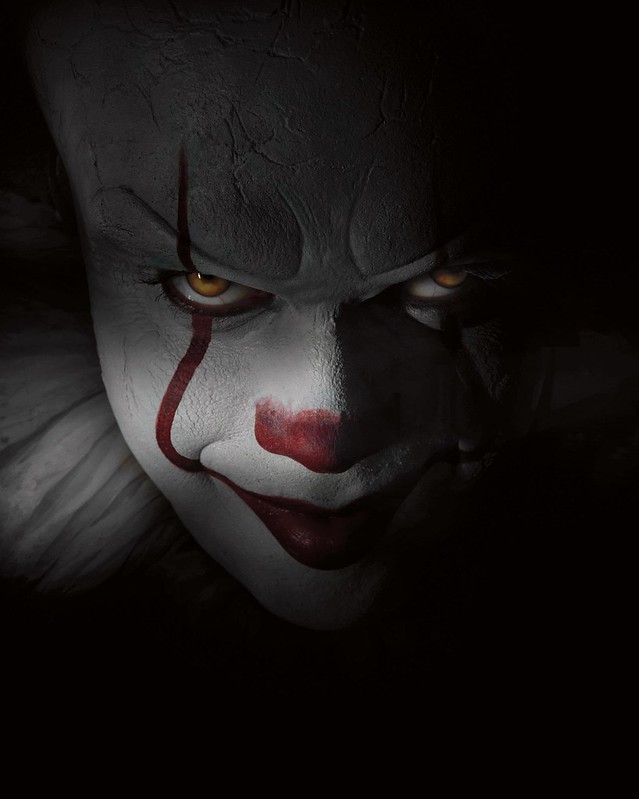 So yeah, when we are all tired of seemingly endless remakes in Hollywood and how the classic films are being ruined by their modern counterparts, Andrés Muschietti‘s IT is more like a game changer. It has given enough justice to its 1990 Tv series classic which made Stephen King’s fans extremely satisfied. With such an effective remake of the 90s classic, I am surprisingly eager to see more of Stephen King’s mastepiece back to the big screen. Anyone here who wants to see a reboot of Pet Sematary? How about Firestarter or maybe Rose Red? How about Christine? Misery and Shinning and Shawshank Redemption and even Green Mile are seemingly untouchable for me. 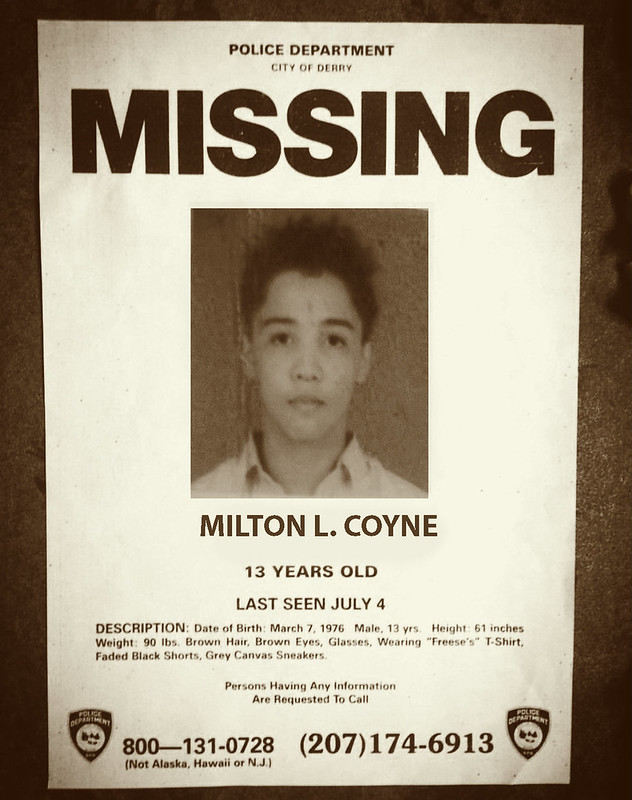 IT: Chapter One is now showing on theaters! Rated R-13 by the MTRCB and is distributed by Warner Bros. Pictures.

My cousin and i have watched 3 movies today. Yup! we had a movie marathon together. Well, he just got this old laptop from his dad yesterday and we found

Three years ago, we were all introduced to a new group of lesser-known Marvel superheroes. Well for someone like me who never got the chance to read the older Marvel

There is always that kind of movie that no matter how many times you watch, it seems like it never gets old. It my case, every time I watch Beauty