The Miraculous Our Lady Of Mount Carmel Parish In Batangas 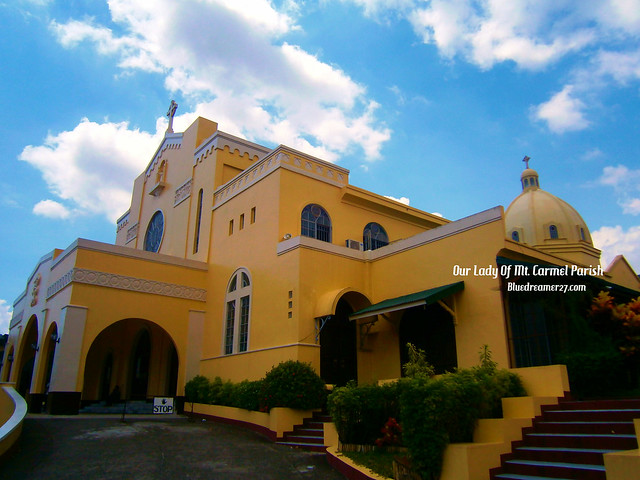 Finally, my PC is now working fine so I can now proceed to the next church as part of our recently held Batangas Pilgrimage Tour. After exploring the famous San Sebastian Cathedral we headed to another church in Lipa City, Batangas and this time, it’s the Our Lady of Mount Carmel Parish located in P. Torres Street, Poblacion, Lipa City. Much like the St Therese of the Child of Jesus Parish, this chapel is a perfect alternative site to visit to San Sebastian Cathedral which is often congested.  Our Lady of Mount Carmel Parish is notably less crowded but above anything else, the place itself is miraculous! 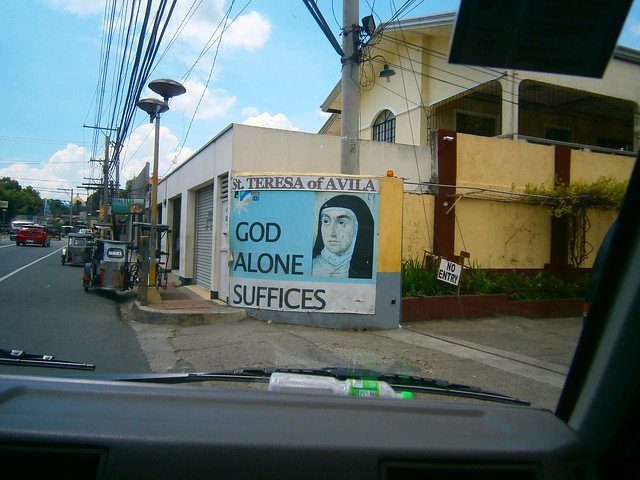 The church is part of the Carmelites convent in Lipa City and is officially known as Monastery of Our Lady of Mt. Carmel of Mary Mediatrix of All Grace. 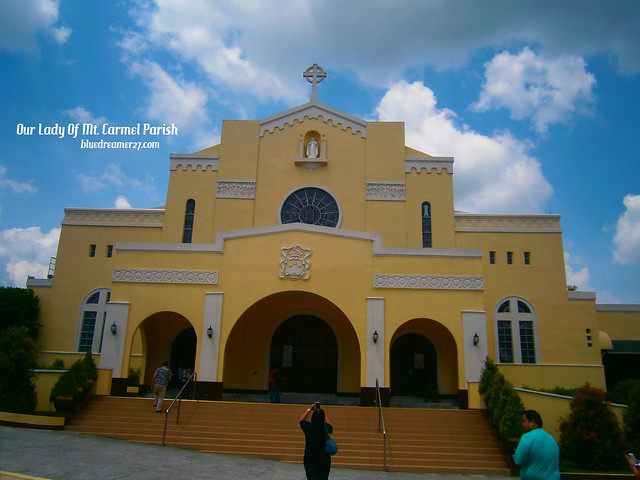 The Church was founded on May 31, 1946, just a year after World War II left the town of Lipa in ruins. The Carmelite nuns was transferred from Manila to Lipa during the feast day of Our Lady of Mediatrix of All Graces, thus the image became their patronage. Since then, several miraculous events have been reported. 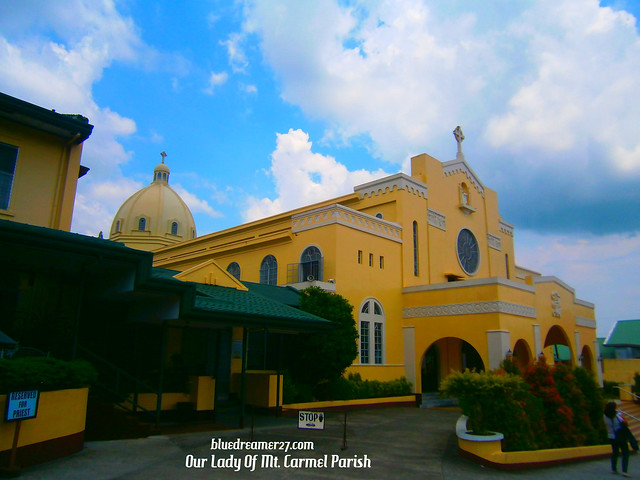 his church is well known among Batanguenos and perhaps to most Filipinos for this happens to be the site of the mysterious shower of rose petals decades ago. 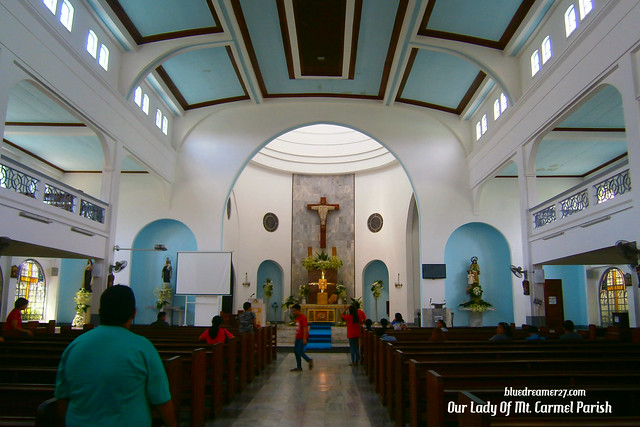 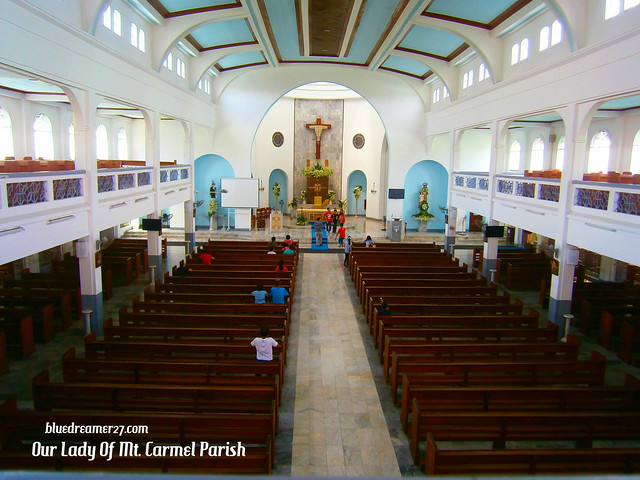 The Church’s Nave. Unlike most churches in Batangas, Our Lady of Mount Carmel parish a simple and neat design. The interior offers a simple clean white walls matched perfectly with sky blue accents. 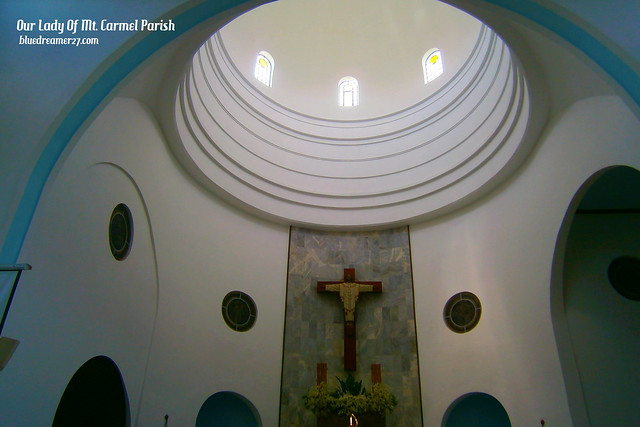 The Dome and the main altar. 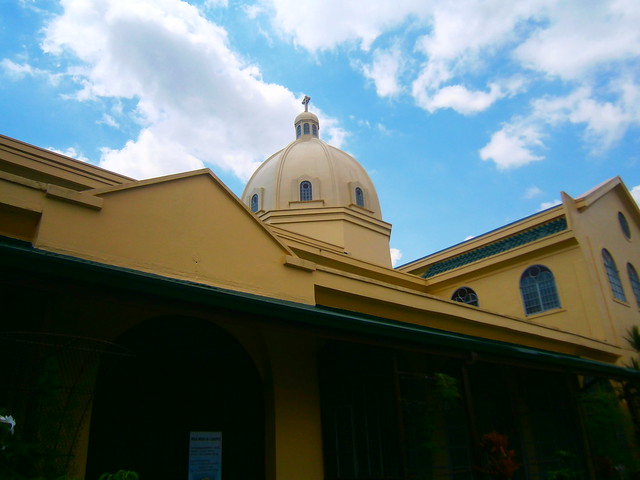 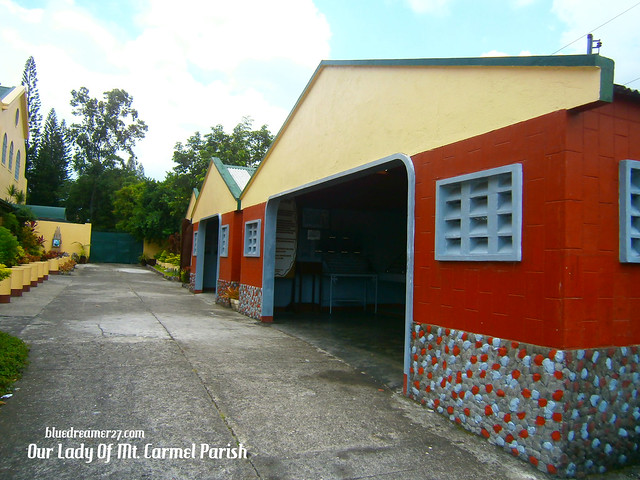 On the right side of the church lies three small rooms including the two rooms for votive candles and another one for the Chapel of Saints. 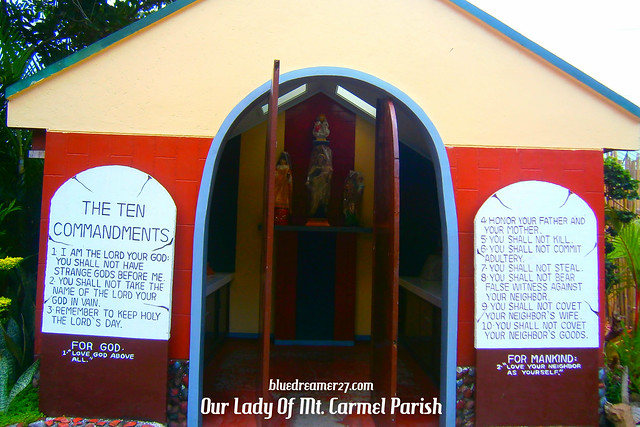 Entrance to the Chapel of saints. You will be welcomed with the two tablets stating the ten commandments. 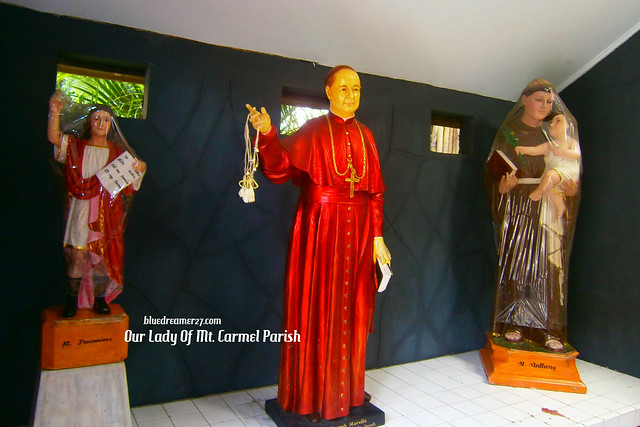 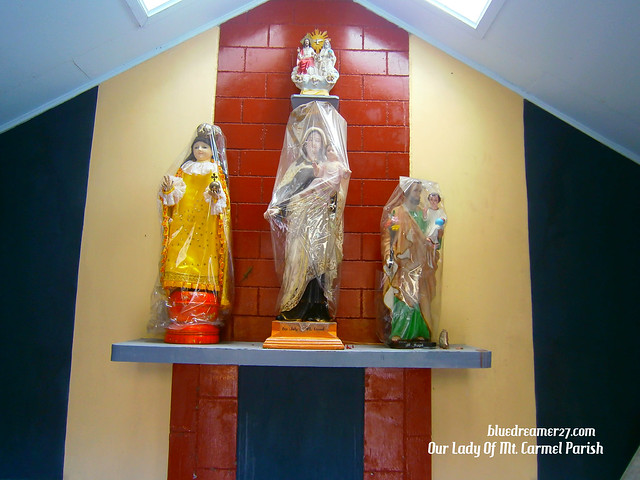 Saints and Images inside the chapel. 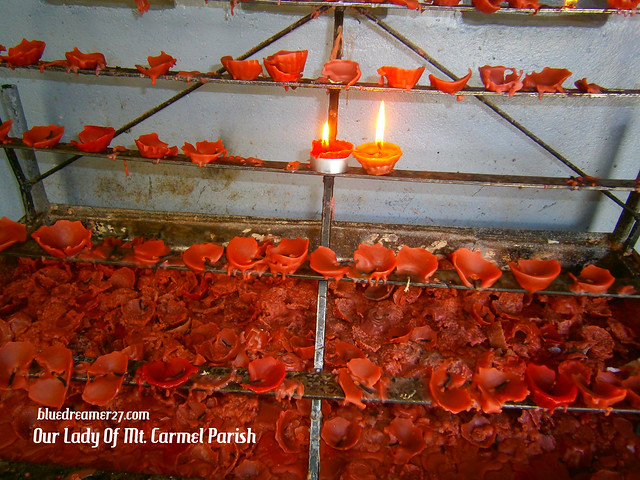 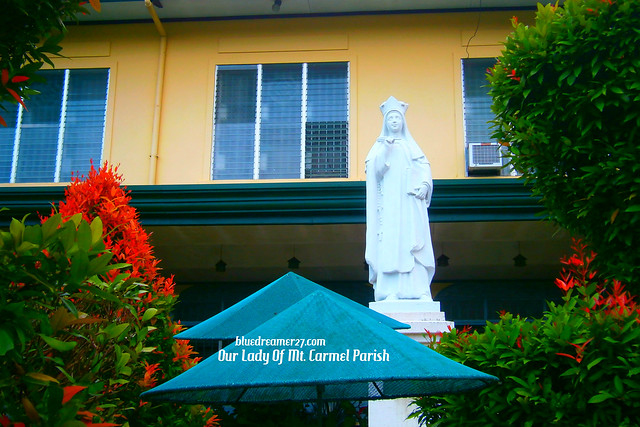 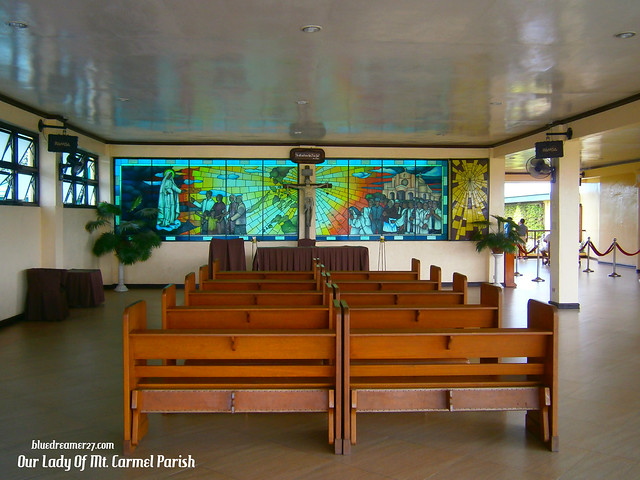 On the left side of the church is another building that will take you a small chapel and also to the actual place where the falling of the rose petals and the apparition occurred. 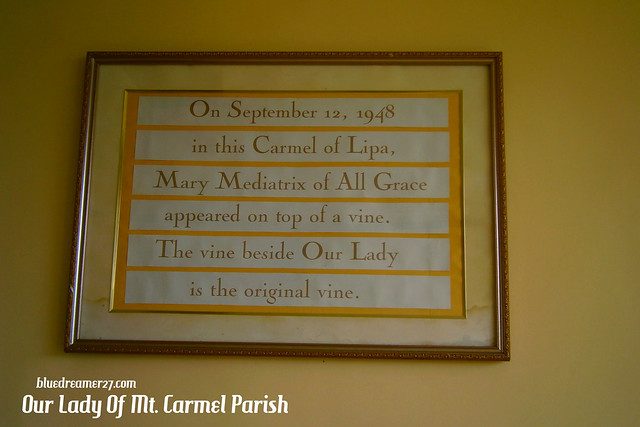 On September 12, 1948 while Teresita was praying in the convent garden, suddenly a vine began to shake. Our Lady allegedly spoke (but not appeared) to her and requested her to kiss the earth and return to the same spot for fifteen consecutive days. 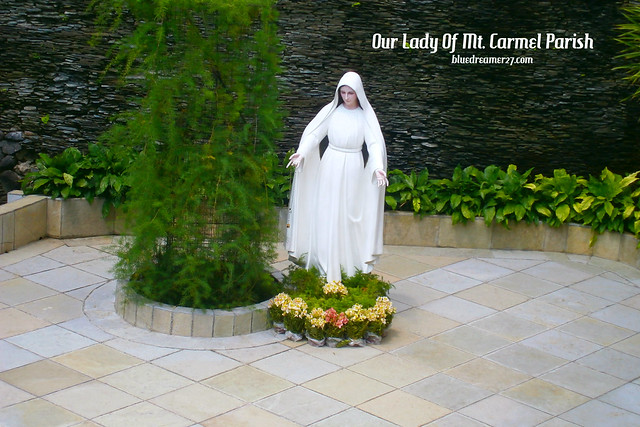 [The original vine] The apparition was declared by the Catholic Church as fraudulent and ordered everything related to the incident be put away. Teresita left the monastery and the convent was sealed from the public. 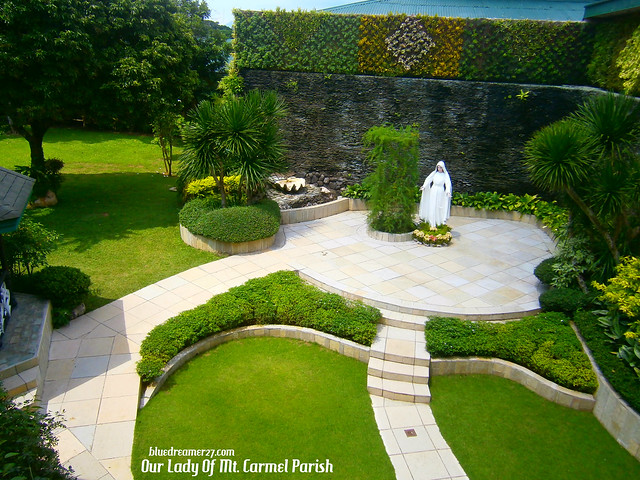 42 years later, a new apparition occurred in 1990 with the Blessed Virgin supposedly requesting the statue that the Catholic Church previously ordered destroyed (which the convent did not obey, but instead hid) be displayed inside the chapel again. The request was granted by the convent and rose petals allegedly started raining from the sky a few days after. The statue was then reportedly seen to have come to life by six children playing at the convent ground. 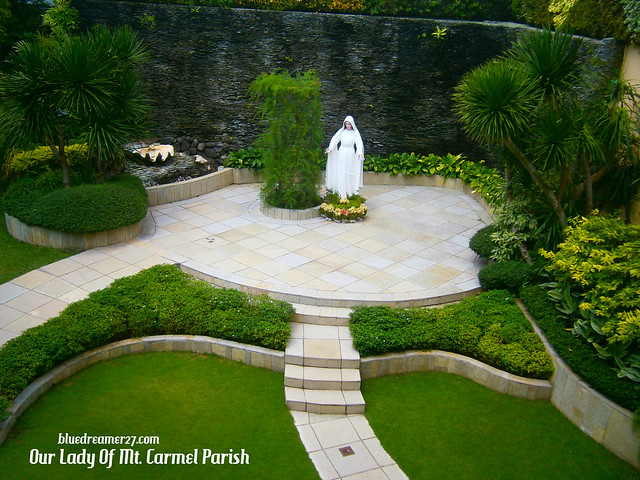 The garden itself is not accessible to the public but it can be viewed from the second floor of the building.

I used to pass by Manila area when I was working in Makati and Pasig but I realized that I never really get the chance to explore this place. It’s

On June 29, 2017 from 9AM to 2PM at Makati Sports Club, Makati. More than 300 Travel and Tour Operators will be in one roof for the yearly Zoomanity Group