Cavite City Celebrates Feast Day of Our Lady of Solitude of Porta Vaga, Her Canonical Coronation and Declaration as National Cultural Treasure

The annual two-week long celebration was extended into a month-long veneration to the miraculous image of Our Lady of Solitude of Porta Vaga in Cavite City.This year’s celebration coincides with three major events which mark another great history in Cavite. All the major events including the declaration of San Roque Parish Church as the Diocesan Shrine of Our Lady of Solitude of Porta Vaga, the highly anticipated Canonical Coronation of the icon and the declaration of the image as a National Cultural Treasure of the Philippine took place this whole month of November. 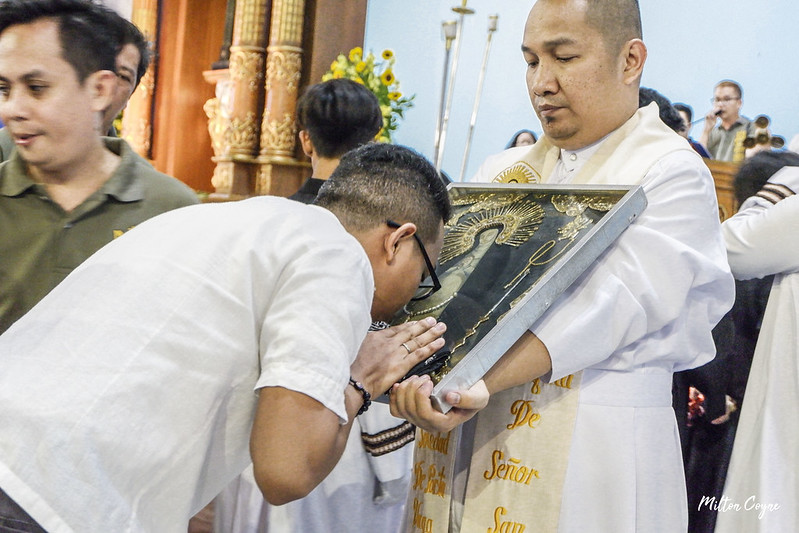 Our Lady of Porta Vaga is not just the patroness of Cavite City but of all the provinces in Cavite, hence the title “Reina De Cavite” (Queen of Cavite). It is one of the well known Marian devotions in the country. Normally, it is two-week long celebration with grand festivities kicking off every second week of November (the Primera Fiesta). This year, however, the third and fourth week of November were equally grand and special.

The church of San Roque, the sanctuary of the miraculous image of La Virgen dela Soledad de Porta Vaga was officially declared as the Diocesan Shrine of Our Lady of Solitude of Porta Vaga last November 18. On the same day, the much-awaited Canonical Coronation was held. Last Saturday (November 24), the icon was officially declared as a National Cultural Treasure by the National Museum. 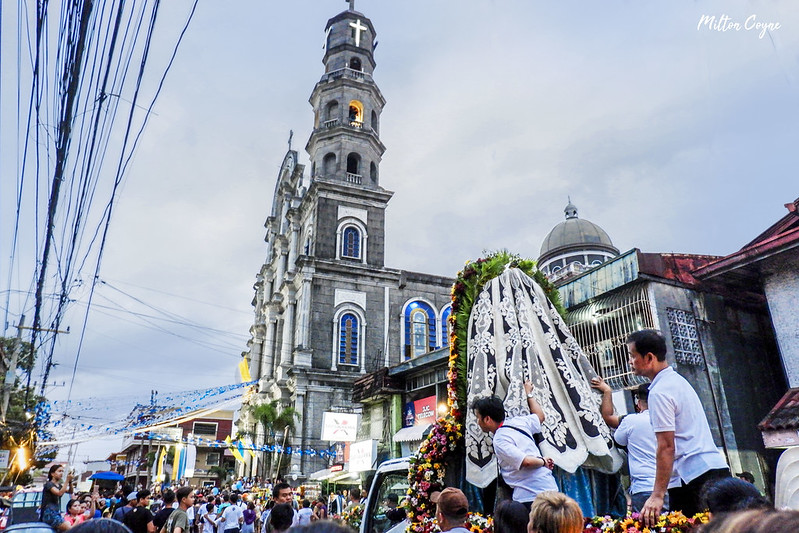 The Primera Fiesta kicked off with a festive motorcade, two days prior the actual Feast day.  The parade of vehicles started from El Palacio hotel in Noveleta and passed through different streets around Cavite City. The following day ( the bisperas), the traditional caracol was held in honor of the Patroness.

Caracol or Karakol is a traditional devotional-circumambulatory-dancing procession in honor of the patroness accompanied by a joyful music in the waltz rhythm played by a brass band. This is the exact opposite of the “Prusisyon Silencio” or “Silent Procession” where the image is being paraded solemnly every Lent or even in Grand Marian Procession which will be held this coming December 2, 2018 in Intramuros Manila.

There are two sets of Caracol. The first one is done in the morning where the image will be carried by a boat and will be sailed towards the bay of Canacao. It is better known as the “Caracol Del Mar” or Karakol by the sea. Cañacao Bay is the place  where the apparition took place. 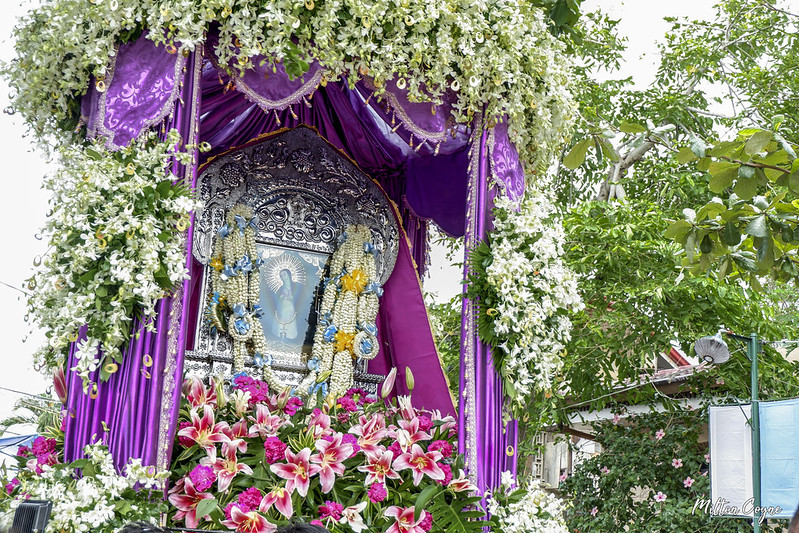 The second Caracol was held in the afternoon where the image will be paraded on the streets of Cavite. She will be carried by a huge andas which is adorned with flamboyant decorations. The Primera Fiesta took place on the second Sunday of November. A special concelebrated mass was held in San Roque Parish Church, followed by many other festivities. Caviteños often filled their tables with many special dishes and the streets was filled with many colorful decorations, an undying colorful tradition in Cavite City. 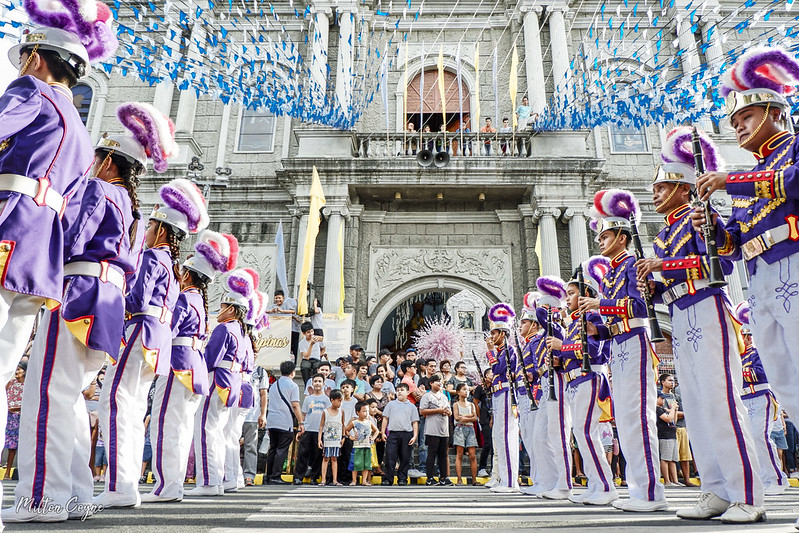 The day prior to the much awaited Canonical Coronation, various festivities were held. One of which includes the colorful “Parada ng mga Banda” (Parade of Bands). 10 bands from different parts of Cavite gathered together to serenade the beloved Reina De Cavite. 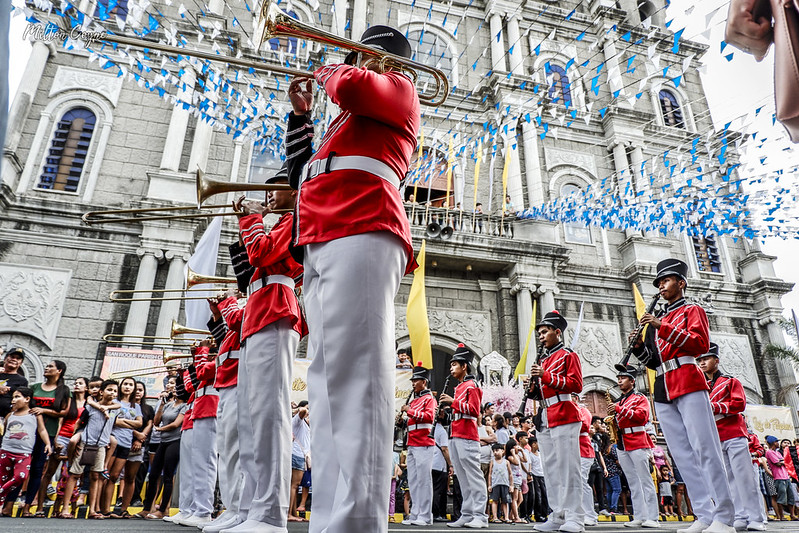 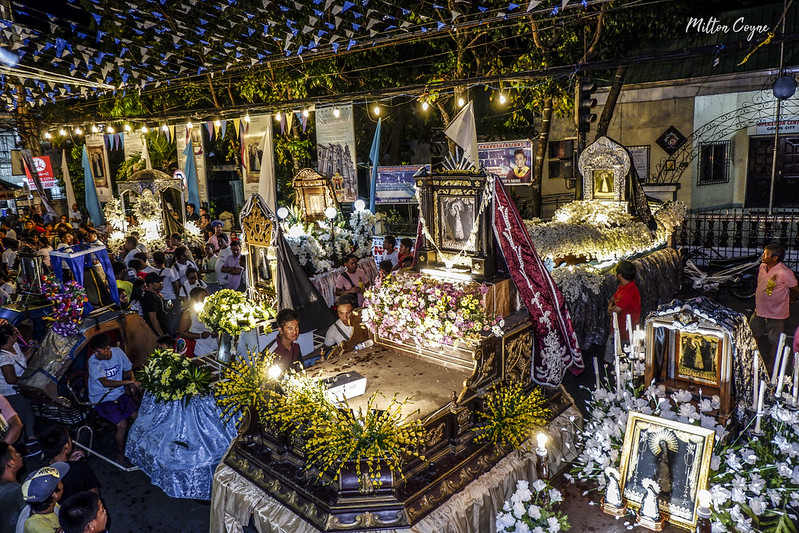 The streets of Cavite City was graced by different replicas of La Virgen de Soledad De Porta Vaga along with the original image which is now enshrined on her Permanent chapel. 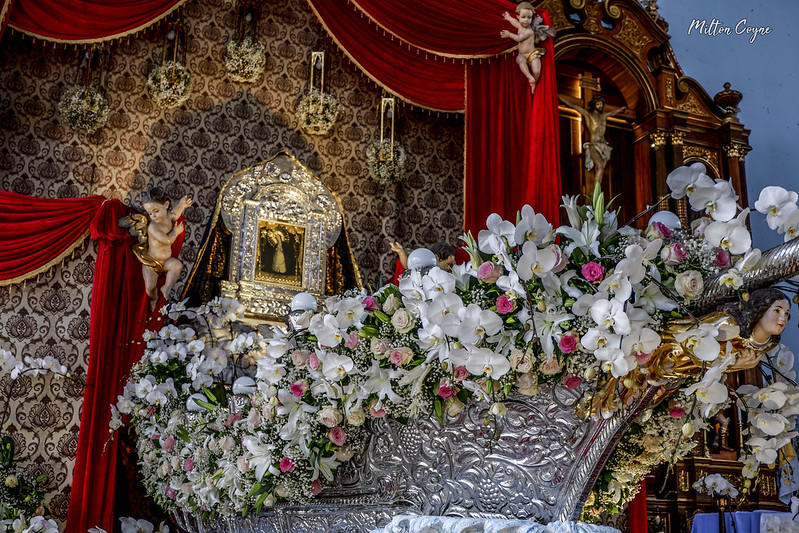 The beautifully and intricately ornamented altar of La Virgen dela Soledad De Porta Vaga during her Canonical Coronation. It is very interesting to note that the image of Our Lady of Solitude of Porta Vaga marked its 350th Anniversary last year. The image was ceremoniously crowned on November 17, 1978 by the former Apostolic Nuncio to the Philippines, Bruno Torpigliani, D.D. However, the existence of a papal bull for the coronation has long been disputed as illegitimate, as no records of Pontifical authorization to crown the image previously existed in Rome. 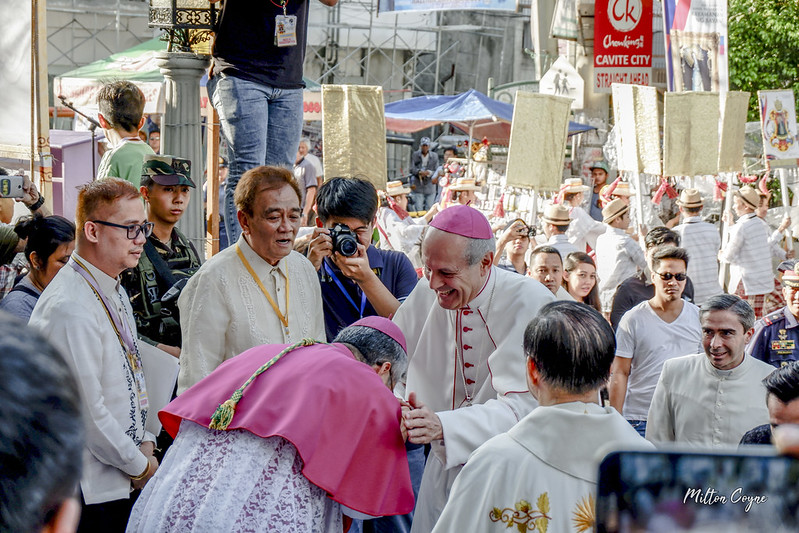 The arrival of the Papal Nuncio. The Apostolic Nuncio was warmly welcomed by Rev. Fr Dominador Medina (Parish Priest of the Diocesan Shrine of Porta Vaga) and Bishop Reynaldo Evangelista and of course by the Caviteños. 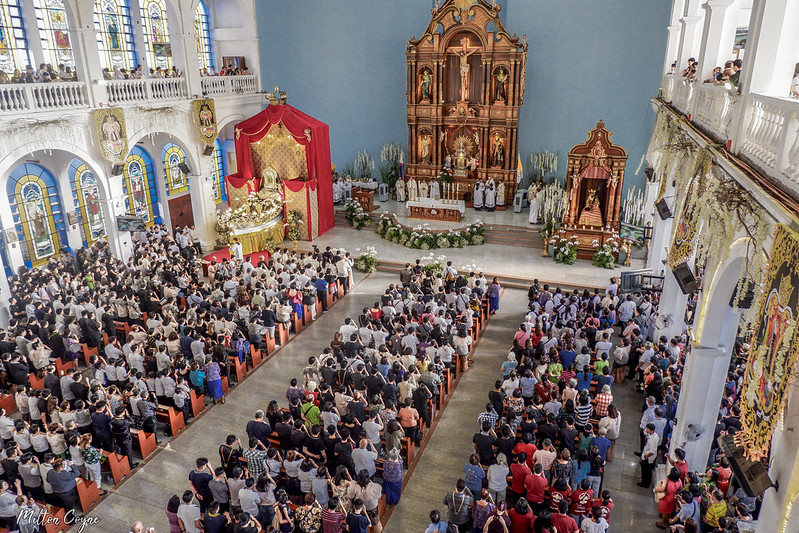 The church was filled by an overwhelming crowd which only shows the overwhelming devotion of Caviteños to their beloved Patroness, the Queen of Cavite (La Virgen Dela Soledad De Porta Vaga). 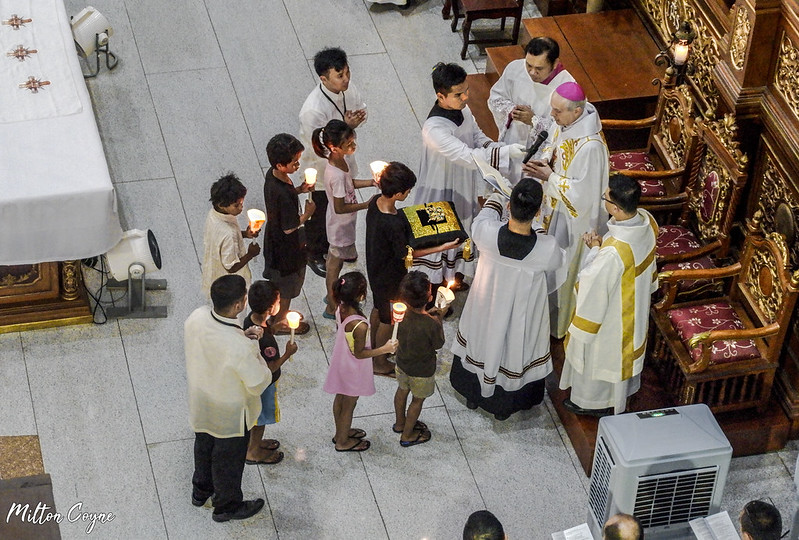 One of the most emotional moments during the coronation was when these kids (street kids) solemnly offered the intricately detailed crown to the Papal Nuncio. I love how this moment wonderfully reflects Mary’s profound humility, welcoming people regardless of their status in life. 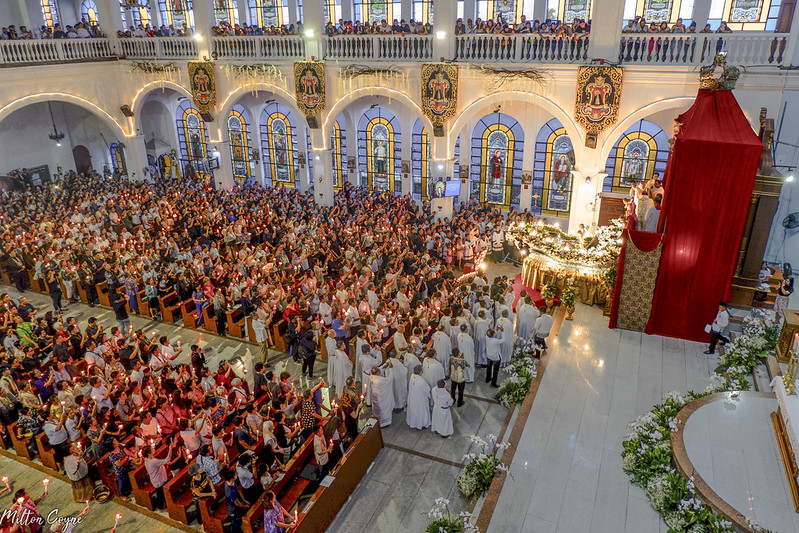 A solemn moment with thousands of Devotees lighting up their candles while singing the hymn of Reina De Cavite. 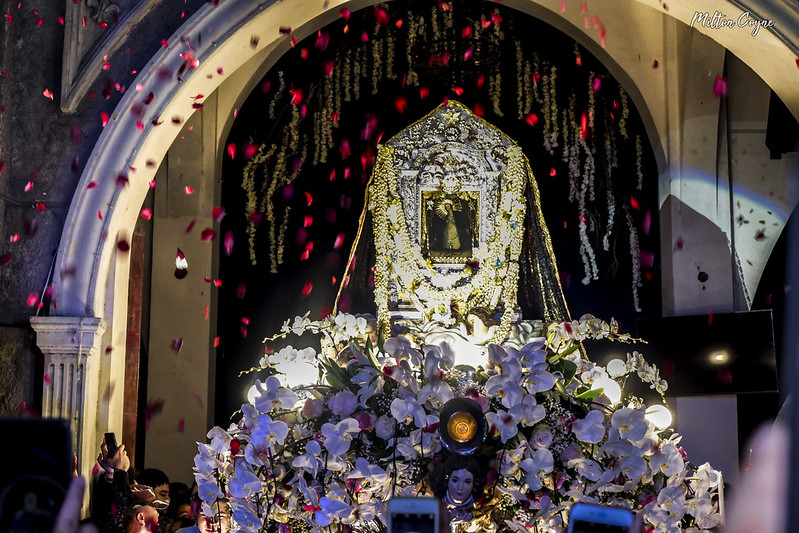 A Grand Procession was held at night on the same day, it was technically the first procession of the image as an official Canonically crown Marian icon!

Declaration as National Cultural Treasure of the Philippines 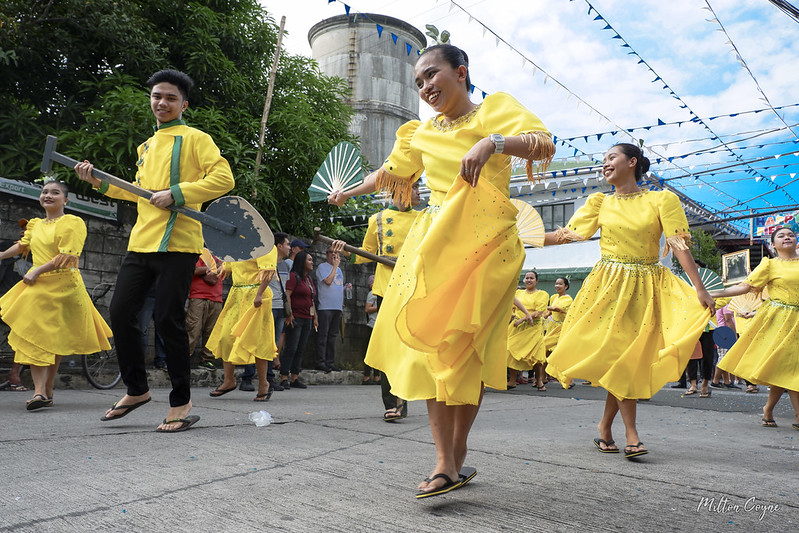 The celebration continues! Last Saturday was another historical day! After getting the nomination as a National cultural treasure last year, the 351 year-old painting of Our Lady of Solitude of Porta Vaga was officially declared by the government as a National Cultural Treasure of the country. Prior to the major event, a Caracol dela Tierra was held. 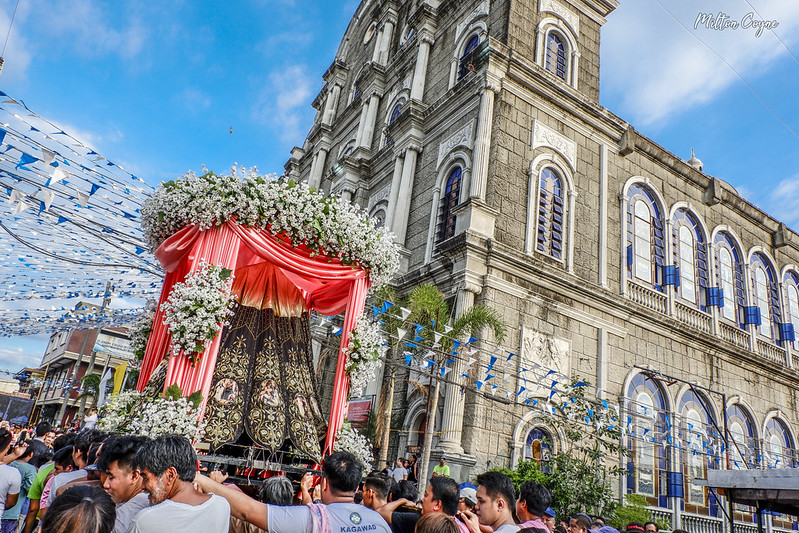 The canonically crowned image of Our Lady of Solitude of Porta Vaga as she arrives in her Diocesan Shrine. 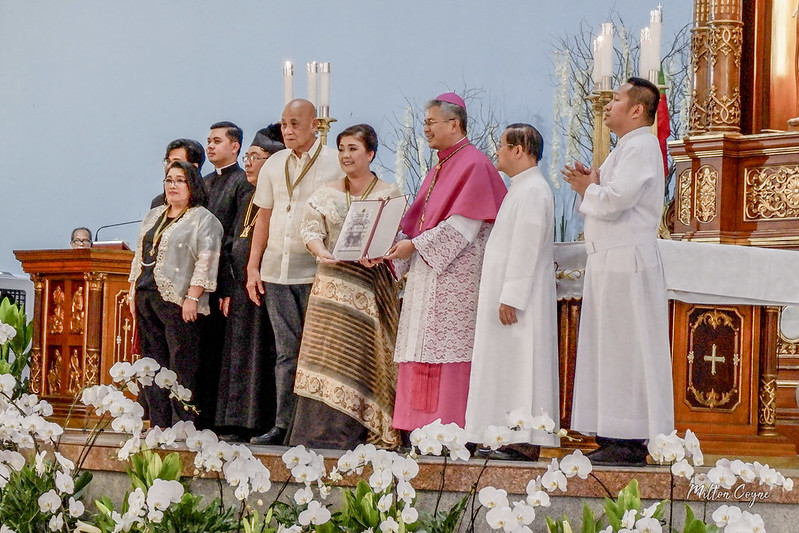 Prior to the mass, the official declaration was held. The government officials and representatives from National Museum officially declared the image as a National Cultural Treasure! On the same day, the officials of Cavite City declares November 5 as Fr Dominador Medina day and Social Action Day in Cavite City. This was done to honor Fr Medina’s tremendous contribution in the city in terms of charity works!

After visiting the miraculous Ina Poon Bato Church in Botolan, we headed to a small and humble church in Cabangan which is under the patronage of Saint Rose of Lima.

Finally, after a long wait, cousin Myrna and his boyfriend will be getting married this coming July. They informed us about this wedding plan last week as they invited us

Holi Festival is nearly approaching. Holi Festival is an annual  Hindu religious festival that is being celebrated in countries like India and Nepal. Luckily, we do not have to travel that far