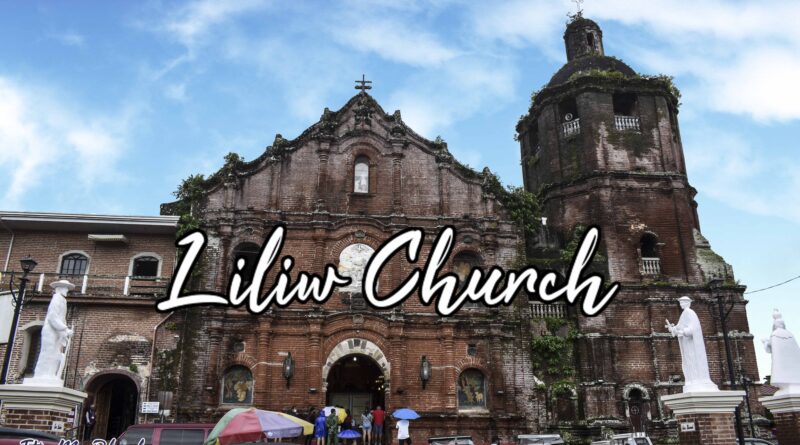 After leaving the Esmeris Farm (Check: Esmeris Farm in Liliw), we actually have no other plans but to go back to our campsite. The weather was really not cooperating with us at that time and canceling all our plans is the best option we had. We’re on motorcycles and we did not bring any raincoat. I was actually hoping to visit at least one church on this trip but our first day didn’t go as planned. Luckily, while heading the town proper of Liliw, we passed by the famous Liliw church. It was not part of our Laguna Pilgrimage last year and so I was eager to visit this church.

The rain gradually stopped and I was secretly praying that our team will somehow decide to stop by. We already passed by the church and I knew there is no way they will go back. While I was embracing the fact that the visit to Liliw church will never gonna happen on this trip, some of our members are starting to head the opposite lane. They are prompting us to go back and encouraged us all to attend the afternoon mass in Liliw Church. Cheers!

The town of Liliw is known for their well-crafted shoes and sandals and you can see an overwhelming number of stores outside the church. You can literally spot a shoe store one block after the other. Aside from the popular Liliw Shoes and Sandals, the town is also known for their Baroque church ~ The Liliw Church.  The church is dedicated under the patronage of Saint John the Baptist and is notable for its red-bricked facade. 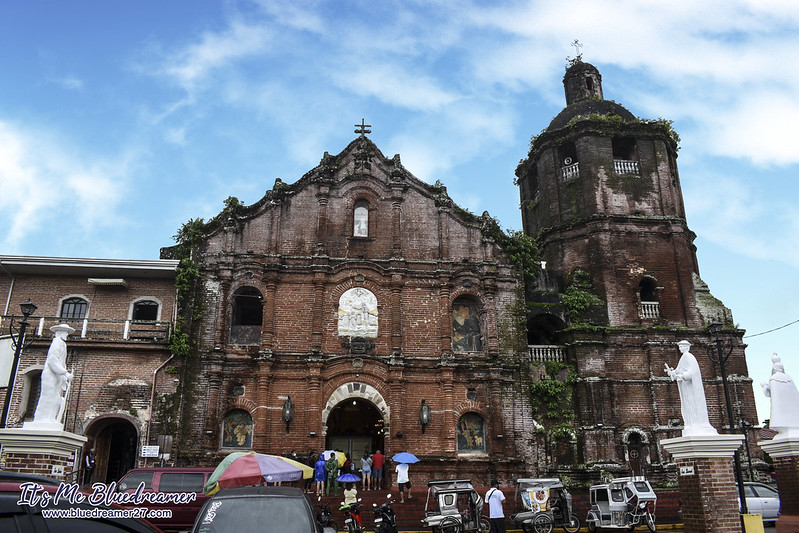 The church was first established as a reduccion by Franciscan Priests in 1578. It was part of the Spanish rule during their regime in the country to establish towns modeled like those in Spain and establish them as settlement and encourage those inhabitants from far-flung scattered barangays to move into a centralized town or cabecera (kabisera) where church and townhown were situated. This explains the distinctive Spanish-style houses in Liliw which can still be seen today. The Liliw church eventually annexed as a visita (chapel) of Naglarcan until it became an independent parish in 1605 with Father Miguel de San Lucas as first parish priest. 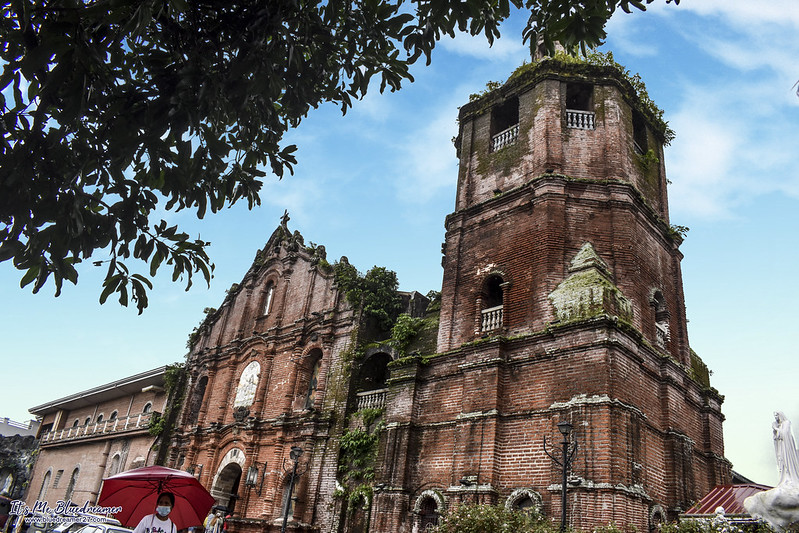 Unlike its current state, the first church built in 1620 was actually made out of wood. A stronger stone church was built from 1643 to 1646. Much like other notable old churches in Luzon, the Liliw Church was also utterly damaged during the 1880 Luzon Earthquake.  It was reconstructed in 1885 and was partially burned on April 6, 1898. Today, the Liliw Church became known for its iconic red-bricked facade and probably one of the most beautiful religious edifices in Laguna along with other old churches like in Paete and Pakil which are both known for their intricate structures. Liliw Church, however, stands out for its stunning red facade. The Salasa Church in Pangasinan also has a red-bricked facade and you might want to check my post here (Check: Our Lady of Lourdes Parish in Bugallon, Pangasinan) 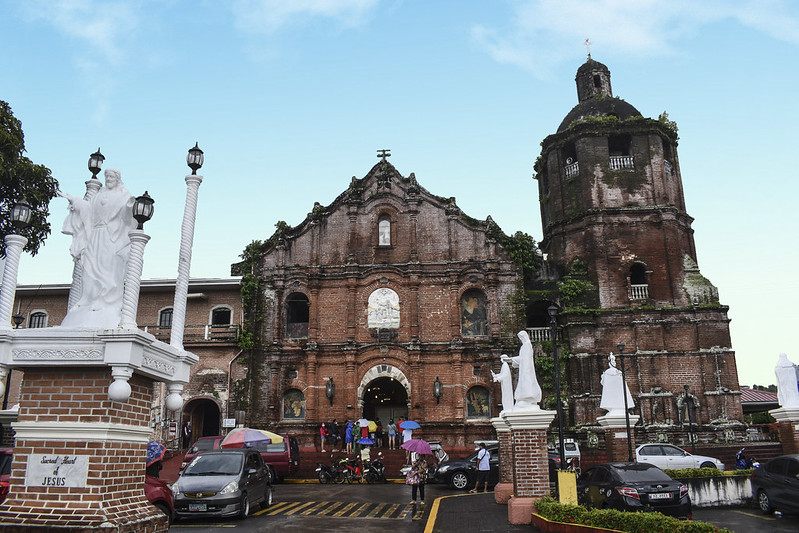 The entire complex is gated and once you entered the premises, you will be greeted by these white statues depicting various Marian images and saints. There are also gazebos outside the church. The grounds outside the church (known as the Patio de Sagrada Familia) have been developed to promote Christian teachings for pilgrims. At the middle of the patio is a white statue of the Sacred Heart of Jesus. It is also interesting to note that the saints and Marian images in the Patio also represents the patrons of each barangay in the town of Liliw. 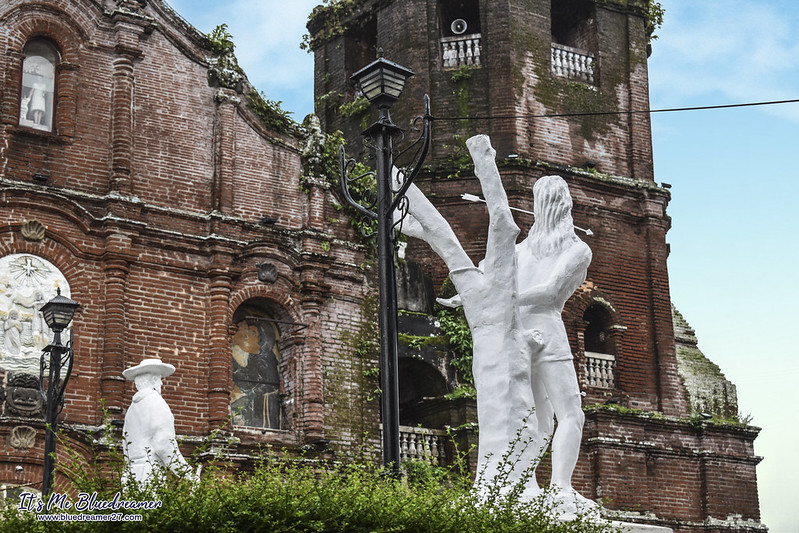 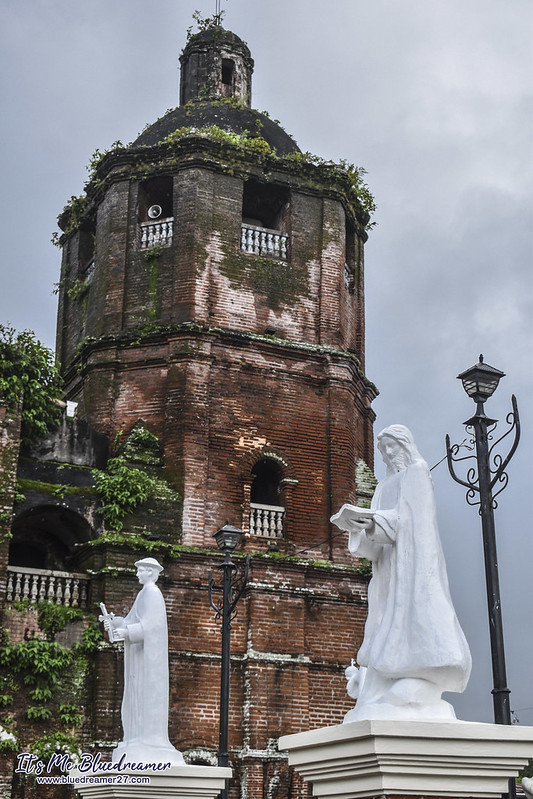 The stunning belfry of Liliw Church 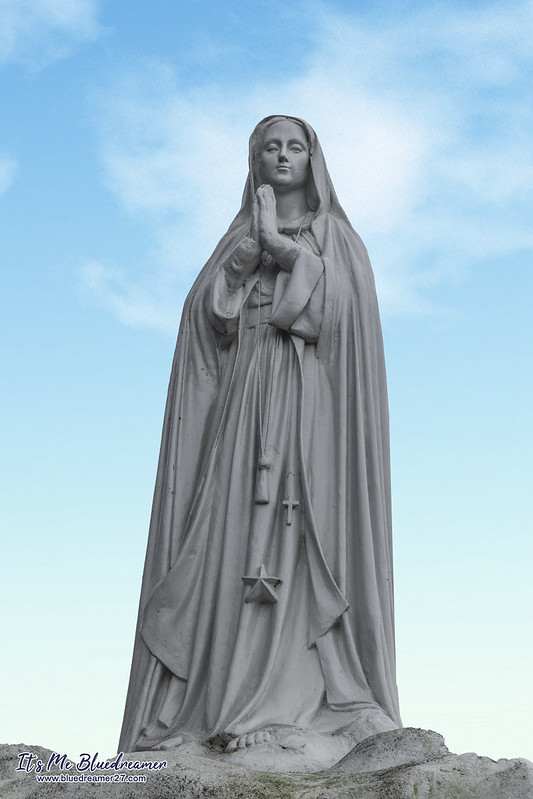 Beside the belfry is the image of Our Lady of Fatima 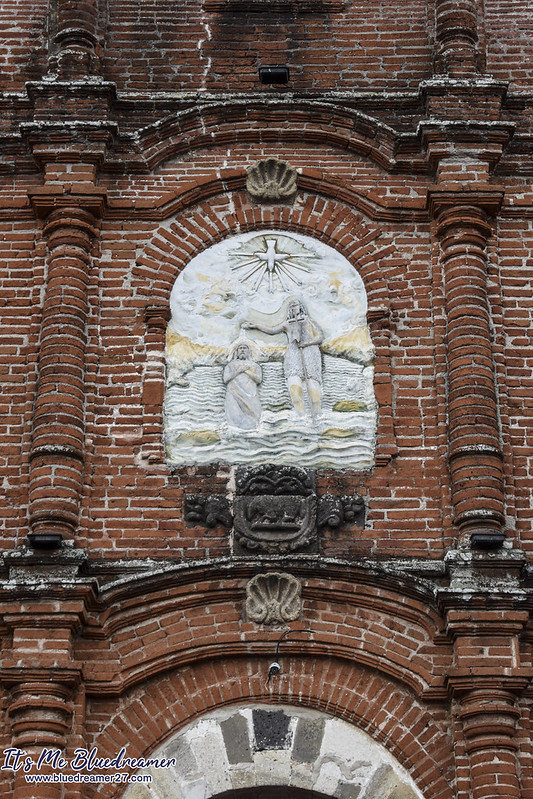 At the center of its facade is a bas relief with image depicting the baptism of Jesus Christ by Saint John The Baptist. 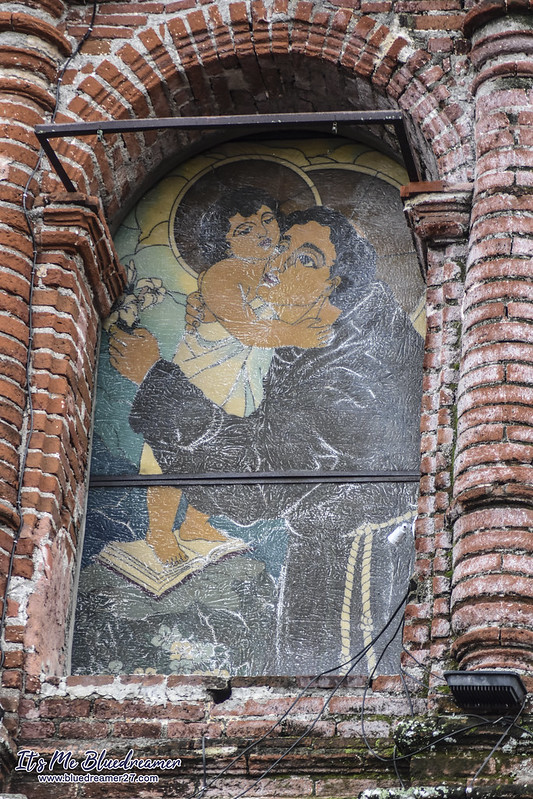 There’s also glass stained images of Saint Anthony of Padua, Saint Mary Magdalene, and another pair of images of Saint John the Baptist (one with the Lamb of God and the other depicting the Baptism of Jesus) on the main facade. 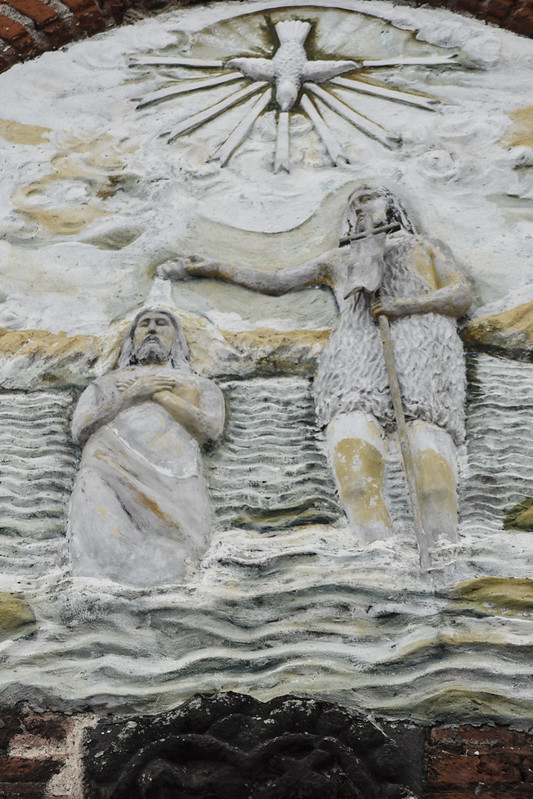 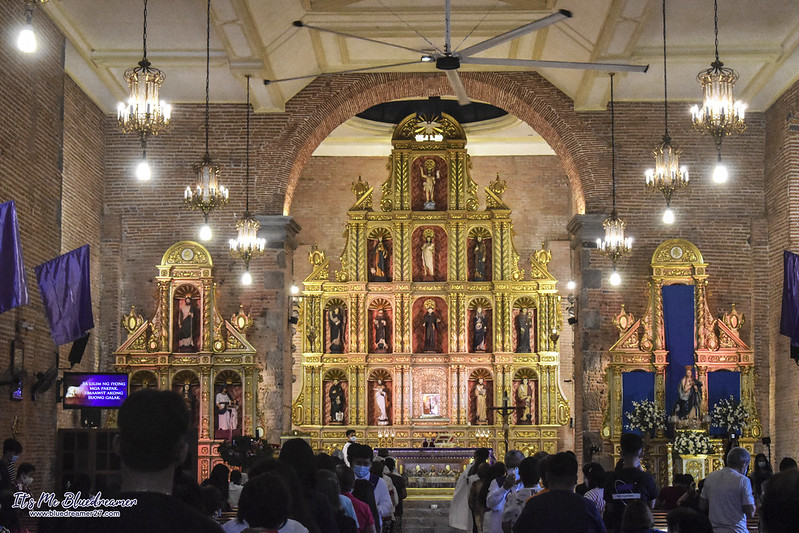 The interior of the church is equally stunning. It also features the red-bricked walls with three stunning retablos. The main altar contains thirteen niches across four levels housing statues of saints. The two minor retablos on each side houses four niches of saints. Originally, these two minor retablos were dedicated in honor of the town’s second patron, San Buenaventura and San Antonio de Padua. It was restored by following the description of a visiting friar through the efforts of Director Emmanuel ‘Maning’ Borlaza, Mrs. Concepcion Brosas and the people of Liliw. 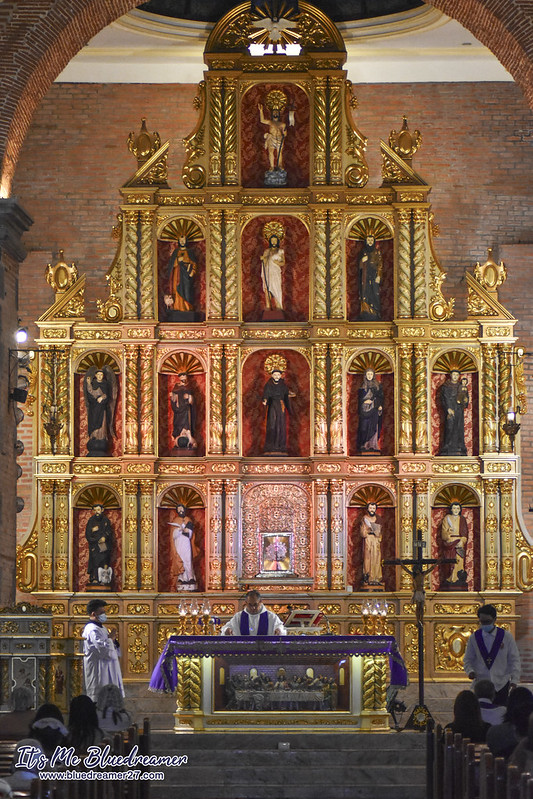 The stunning retablo mayor of Liliw church. The upper most niche features the image of the Risen Christ. The second level features images of Saint Peter, Saint John The Baptist, and Saint Paul. The third level features  Franciscan saints such as Saint Vincent Ferrer, Saint Roch, Saint Francis of Assisi, Saint Claire, and Saint Anthony of Padua. The lower level features the four evangelists; Saints Matthew, Mark, Luke, and John (with the Tabernacle on its center). 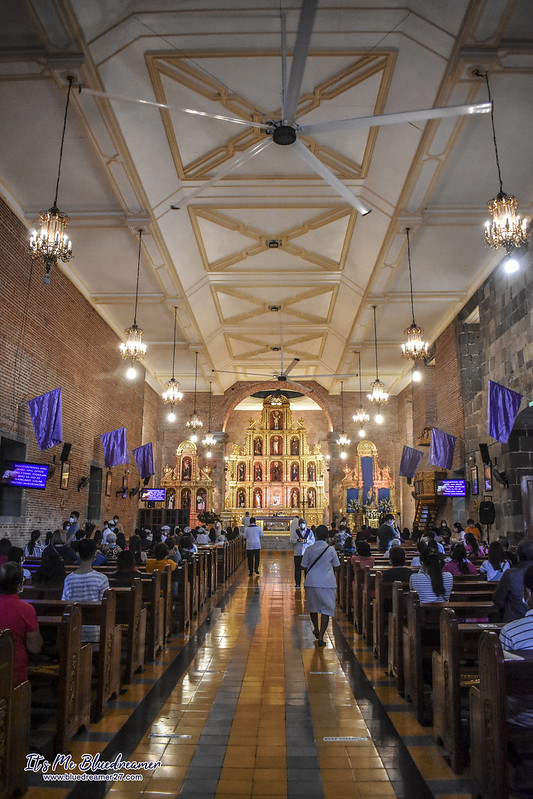 The nave of church 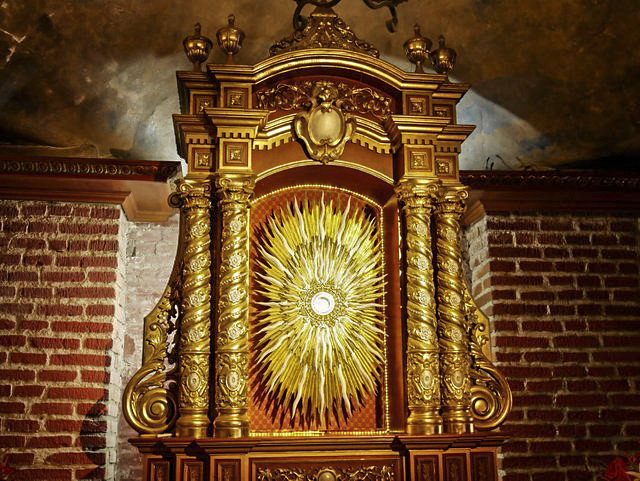 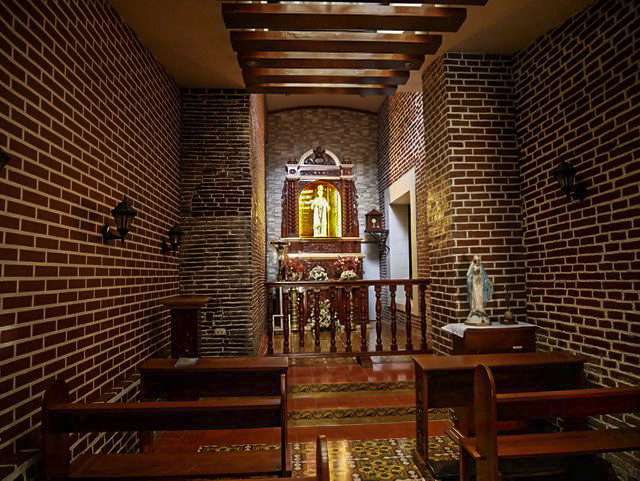 It was a great experience though. Despite all the cancelled plans we had that day, it is always rewarding to conclude it by visiting a church. This was not a pilgrimage tour to begin with but including a church on our itinerary is nothing but a fulfilling experience for me. I will definitely consider going back and witness the miraculous image of San Buenaventura upclose.

In case you missed the first part of our Laguna Trip, feel free to revisit the link below.
►The Esmeris Farm (Daang-Hari Campgrounds) in Liliw 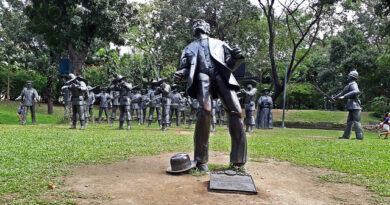 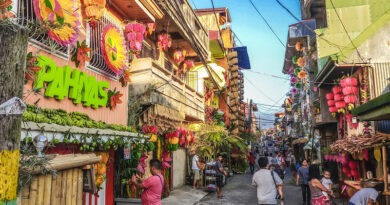 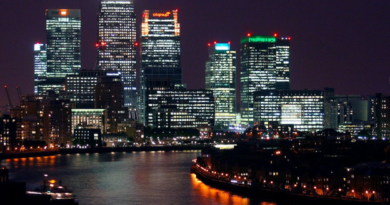 One Day in London: Things You Must Do