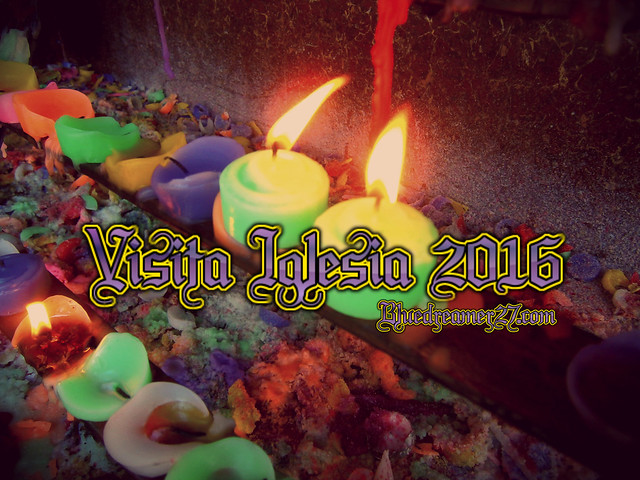 I was once again part of a the same pilgrim group much like what I did last year. We were able to explore 14 different churches in Cavite last year and this time, we decided to visit churches in Batangas. Our original itinerary includes 10 churches in Batangas starting from Sto. Tomas and is supposed to conclude in Calaruega in Nasugbu but things didn’t go according to our plans due to some unexpected events that we encountered along the way. We actually decided to take the route similar to what I had last year with another group. Things went pretty smooth but even before leaving Cavite, we encountered an accident. A motorcycle driver and his friend who are both under the influenced of liquor accidentally crashed to an oncoming jeep from the opposite lane which also hit the rear part of our van. 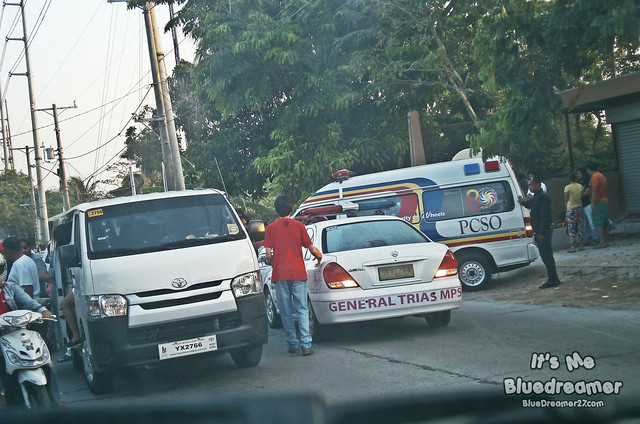 It was one bloody accident which I didn’t even look at. Since we are involved in the accident, the driver had to submit his report and also file a complaint which took us a lot of time. After settling the issue, we headed immediately to our first destination. We almost lost our way to Sto Tomas but good thing , the people are approachable and guided us towards the location of the first church, the Saint Thomas Aquinas Parish. 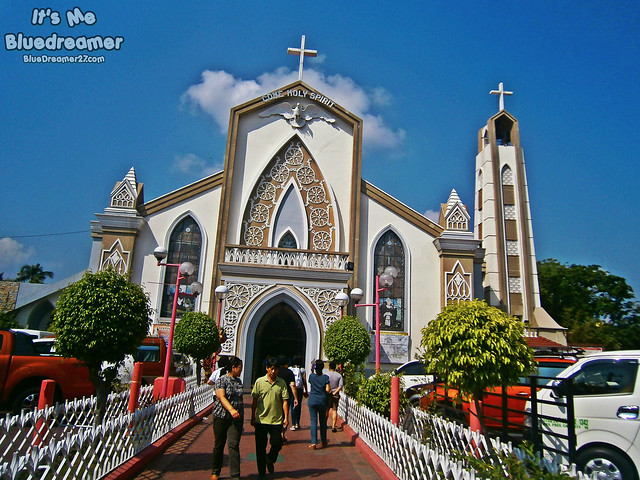 Since I have been here already, i didn’t take much photos at all except for the facade and some areas that I haven’t explored during my first visit. 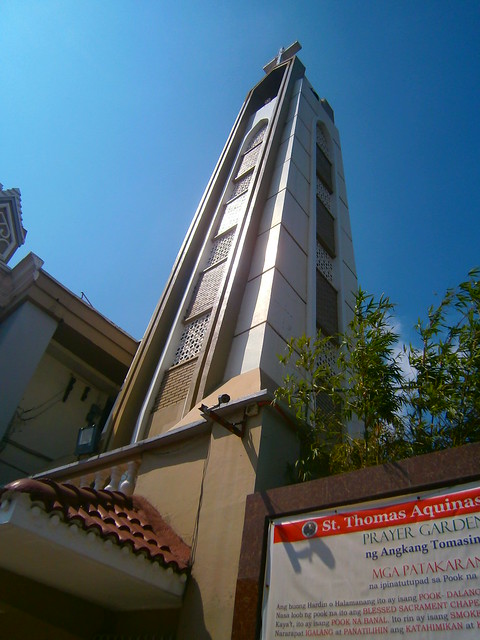 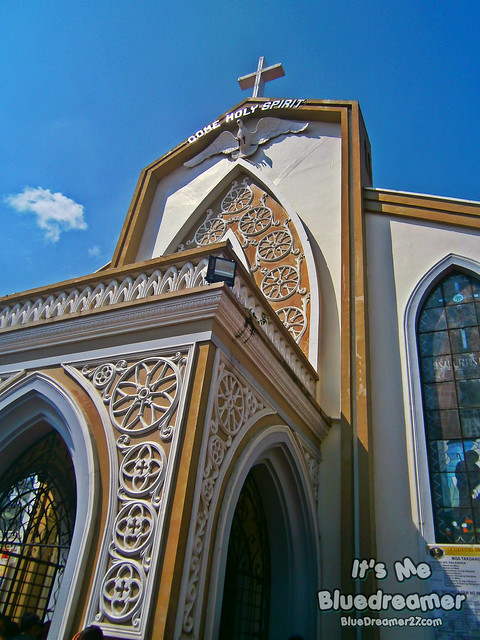 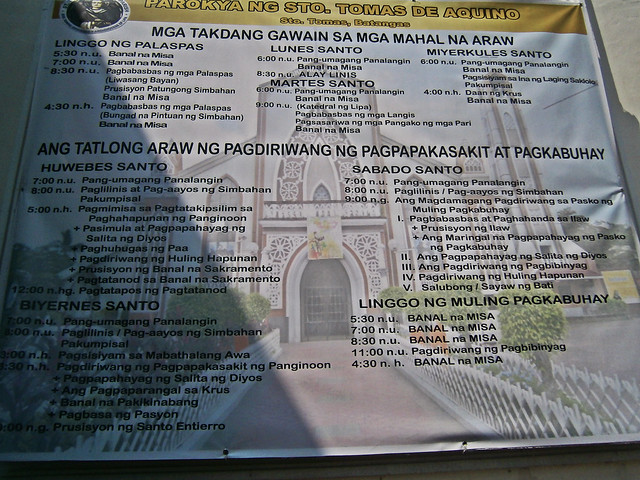 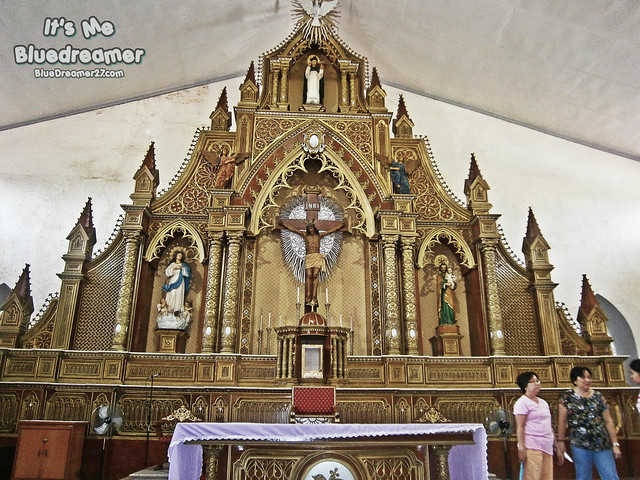 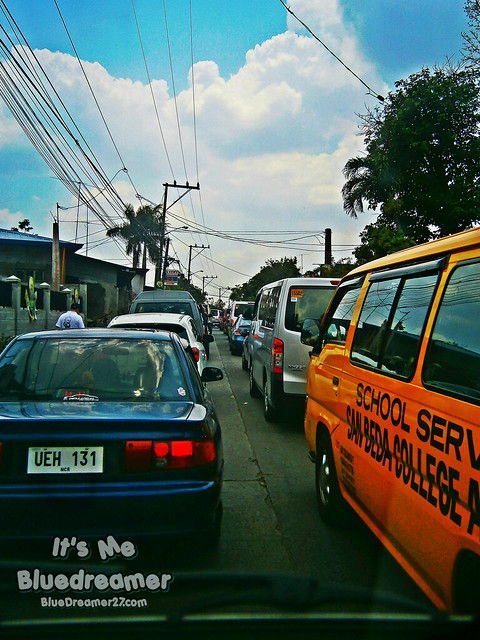 After stating the first two stations, we decided to leave and hit our next destination but we didn’t expect that we will be welcomed by such overwhelming traffic. It took us more than an hour before reaching the Shrine of Padre Pio. 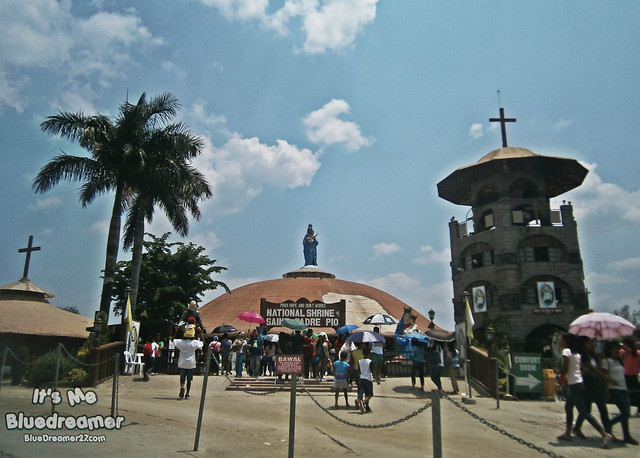 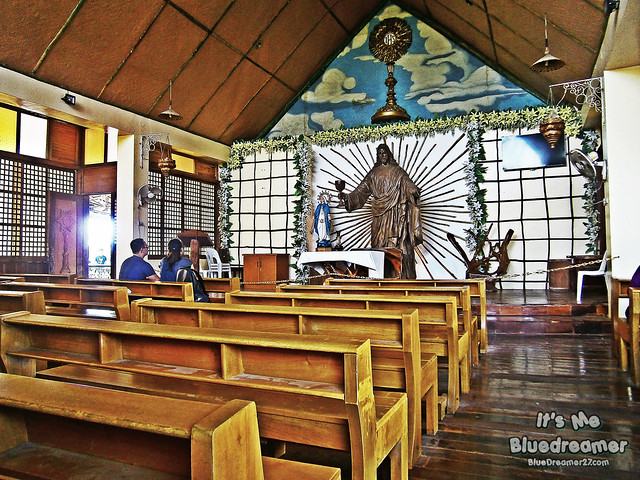 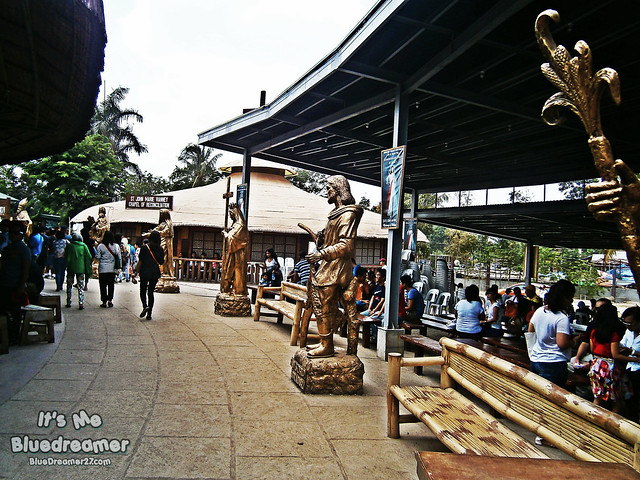 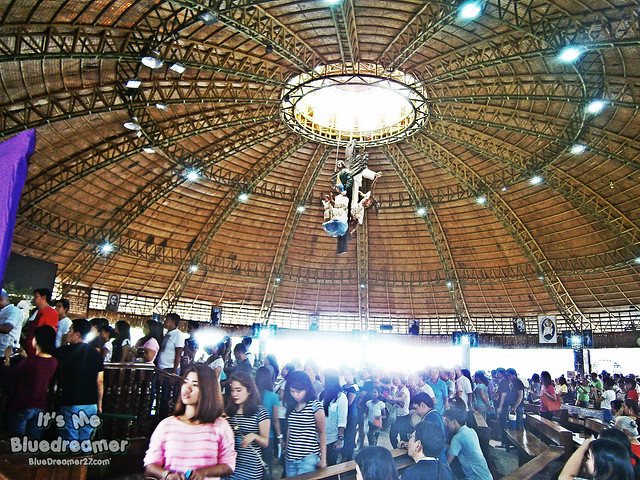 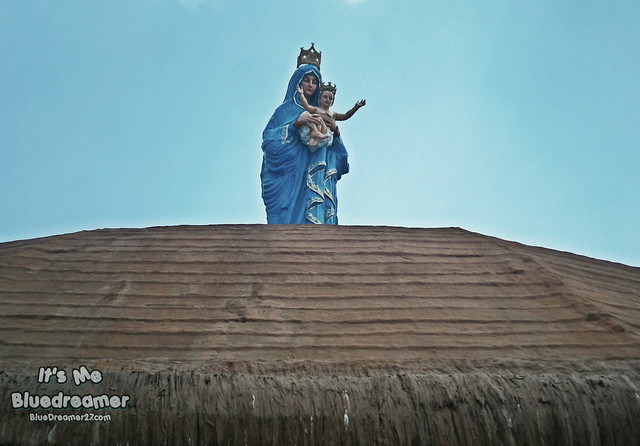 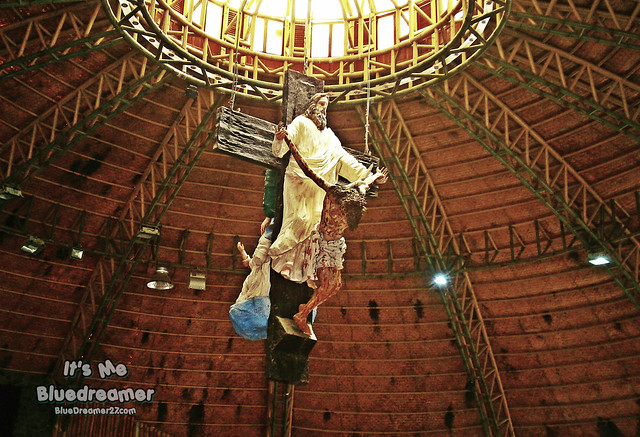 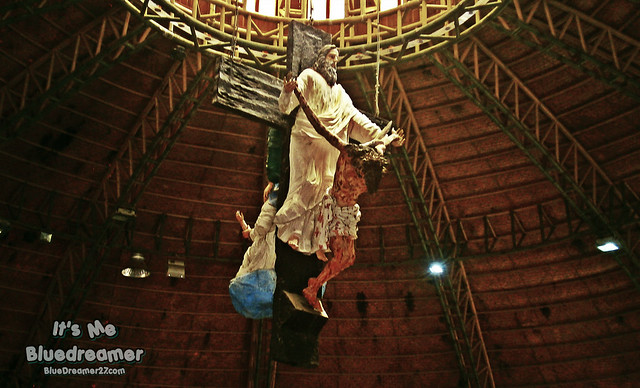 The dome-like church has an eco-friendly and tropical-inspired structure as it is made from wood, stone, bamboo and sasa (bamboo plant) that provide a relaxing atmosphere inside. On the top most part of the ceiling is a hanging cross depicting different images of Christ including the Crucified, the one lying on the lap of Mary (La Pieta) and the Risen one. 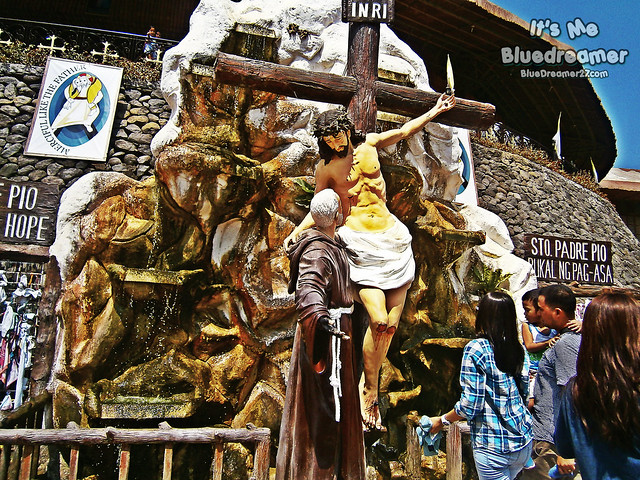 They also added some new attractions in the shrine that weren’t there last year including this stunning fountain with the life sized images of the Crucified Christ and Padre Pio. 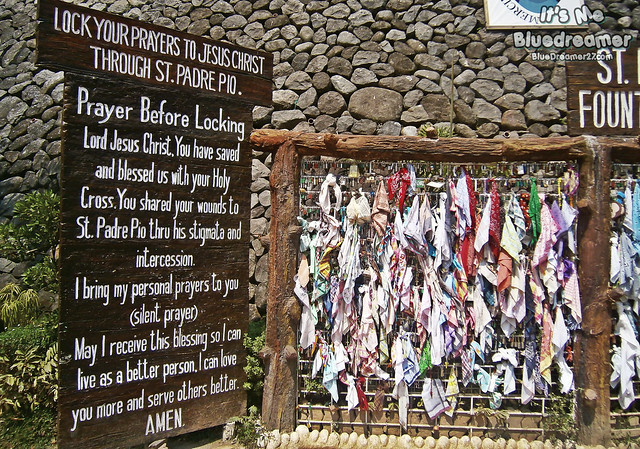 Just beside the fountain is a place where pilgrim can offer or petition their prayers by putting wish locks or tying handkerchiefs. 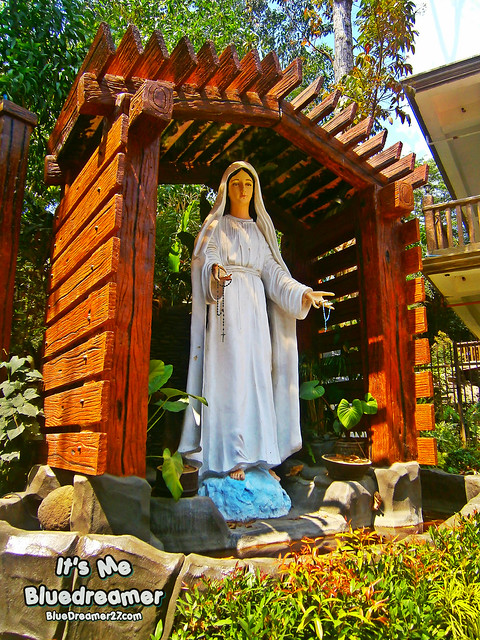 A huge grotto of Our Lady of Fatima near the St Padre Pio Rectory. 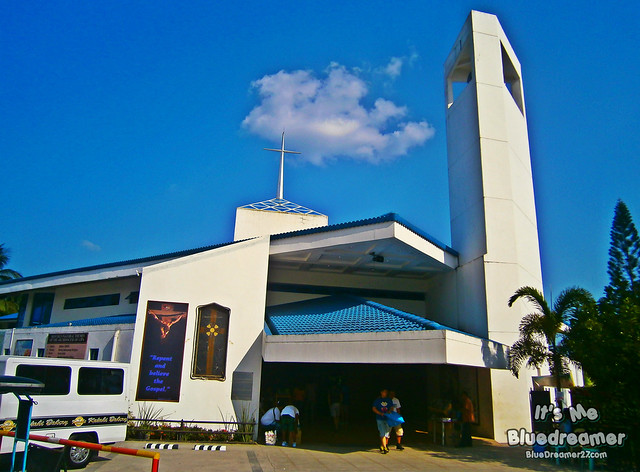 After the Shrine of Padre Pio, we headed to our third destination, the St Therese of the Child of Jesus in Lipa City. We were supposed to visit three churches in Lipa but after witnessing and experiencing such horrible traffic, we all thought that it would be better to visit Taal Basilica as early as possible. 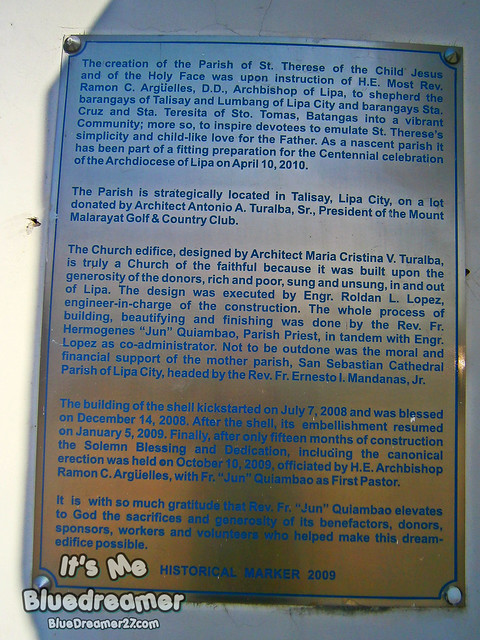 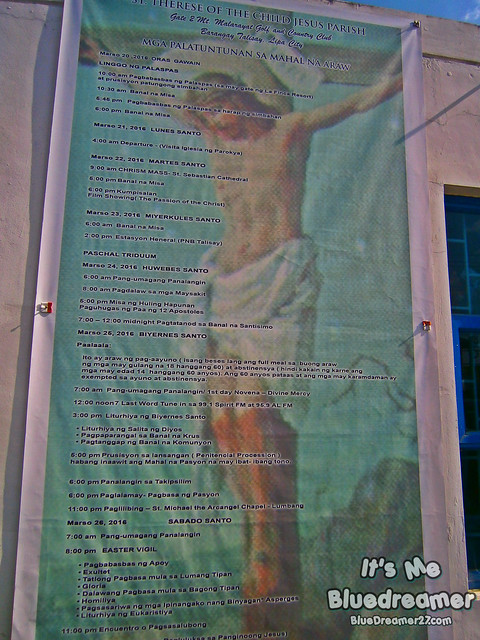 The scheduled of Activities for the entire Holy Week of St Therese of The Child of Jesus in Lipa. 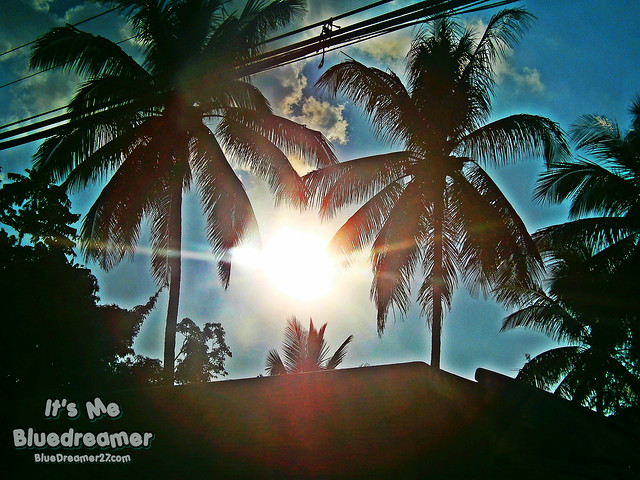 It was long ride goin to Taal so we decided to take our lunch along the road. 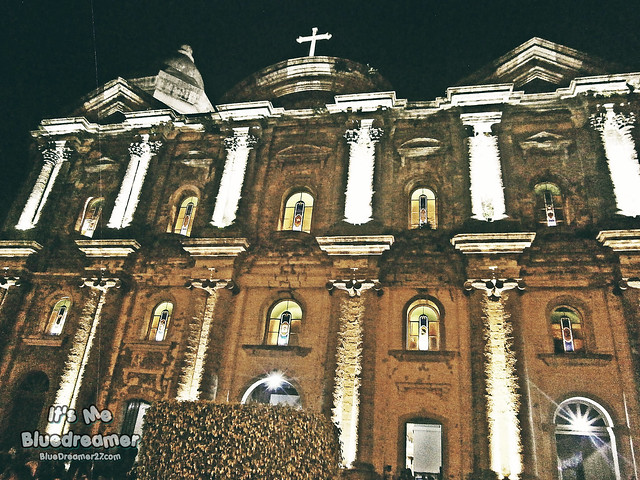 As expected, we are welcomed by a crazy traffic and we managed to arrived in Taal Basilica around 7pm and I can no longer take decent shots. (you can check more details about the basilica here) 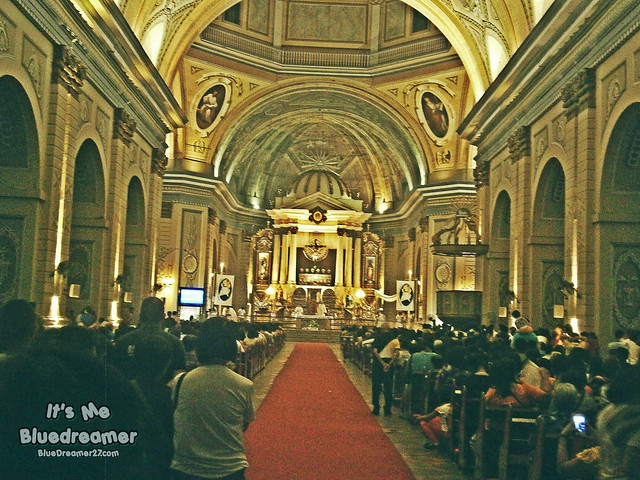 The nave and altar of Taal Basilica. Our original plan is to visit the Shrine of Caysasay and also the miraculous Well of Sta Lucia but it’s too dark already and it is no longer possible for us to walk that far. We all decided to proceed to the next destination which is supposed to be the Calaruega but it was not pushed through because the church is already closed so we headed to Mendez Cavite and decided to visit other churches nearby instead. 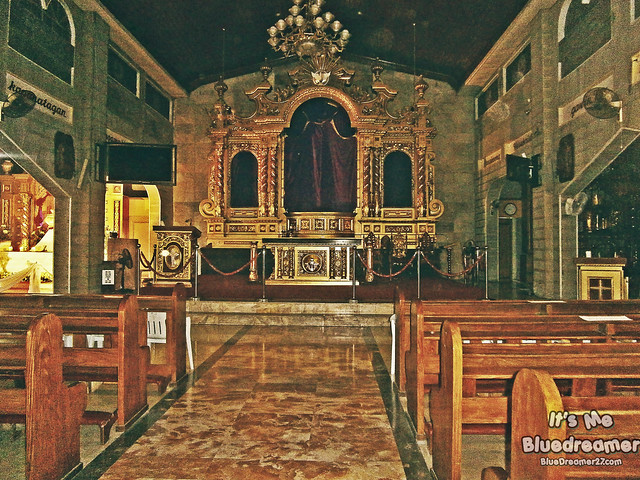 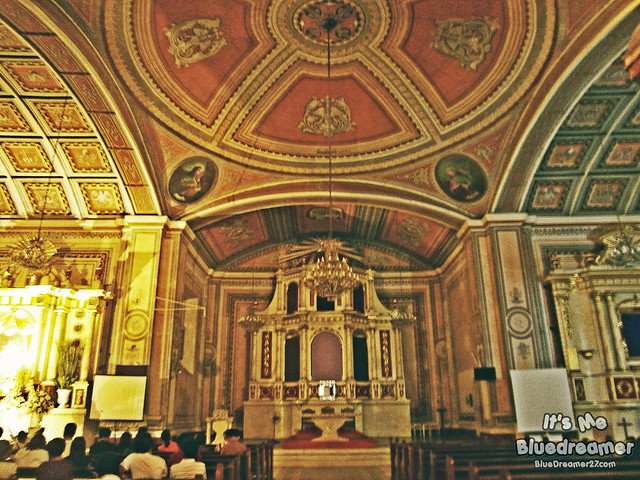 After Mendez we headed to Indang Cavite to visit the St Gregory The Great Parish. We found out that they did some interesting renovation in their facility. You now had to climb down in order to reach their stations of the cross. I didn’t know that the church was that elevated. 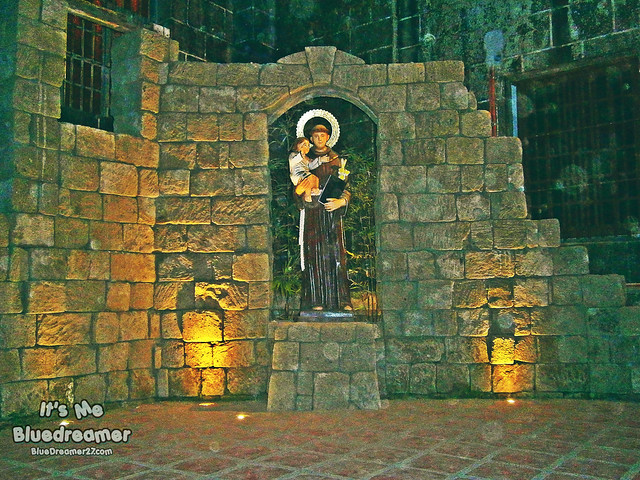 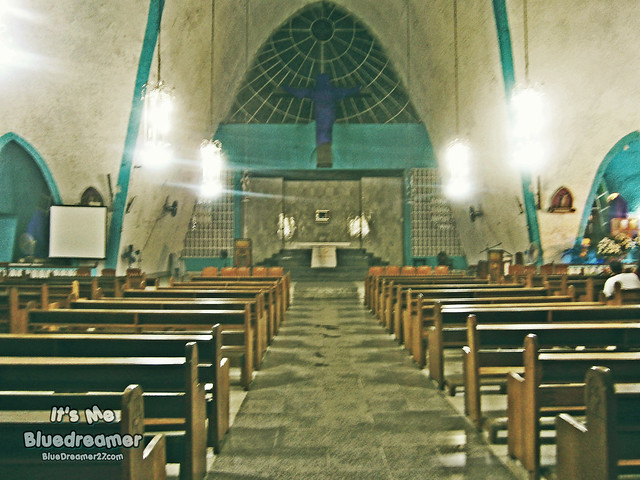 After visiting the Sto Niño De Ternate Parish, we headed to another old church located on the town of Maragondon. This town is not really new to me as I

Have you been to Blogapalooza this year? It was a blast for me and I bet you guys felt the same way! It was such a great experience interacting with

While most people are often complaining about their miserable love life or crying over their financial problems, you should keep in mind that we are lucky enough to experience a normal