We left Mama Nene’s transient house to proceed to our next destination. The original plan is to take us all in the white sand beach of Digisit and then experience crossing the hanging bridge (also in Baler). We were also aiming to visit the Ditumabo Falls (also known as the Mother Falls) but we encountered something unexpected that changed our plans completely.

The bridge that supposed to take us to our destination was unfortunately utterly damaged by the recent typhoon making it non-passable. We were all dismayed but our tour guide (Sir Efren) took us to a hidden gem of Baler which is equally beautiful as the Ditumabo falls. We went to Caunayan Falls which is only accessible through the Amatorio Resort. 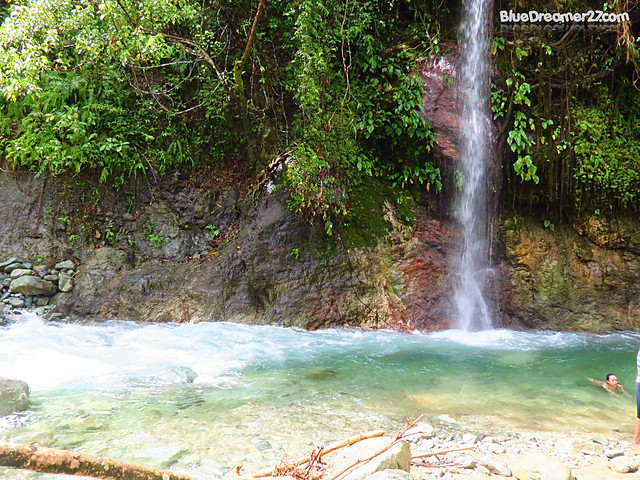 Caunayan Falls is located in the town of San Luis. The town is actually the home of the two popular falls in Aurora. The first one is the Ditumabo and the other one is the serene Caunayan Falls which is more accessible. 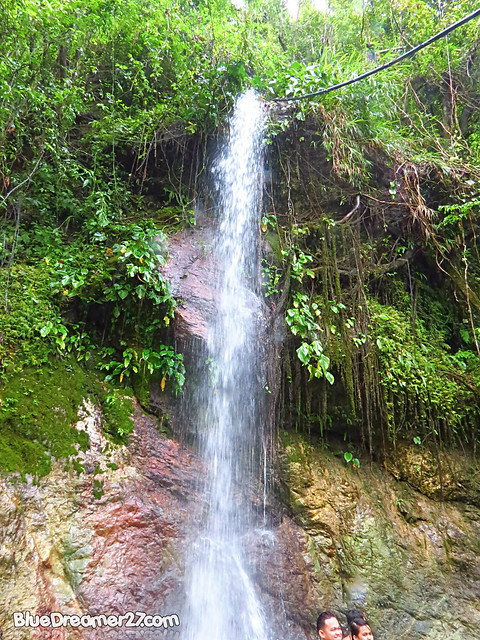 Interestingly, the Caunayan Falls is a seven-tier falls but the water coming down is not as wide and appealing as the Ditumabo. It has nothing to be compared to those Falls in Tanay either (Check Daranak Falls and Batlag Falls) but what really makes Caunayan so special is the serenity of the entire place. This unspoiled gem will really spare you the kind of quietness and relaxing ambiance that most of us are really aiming for. 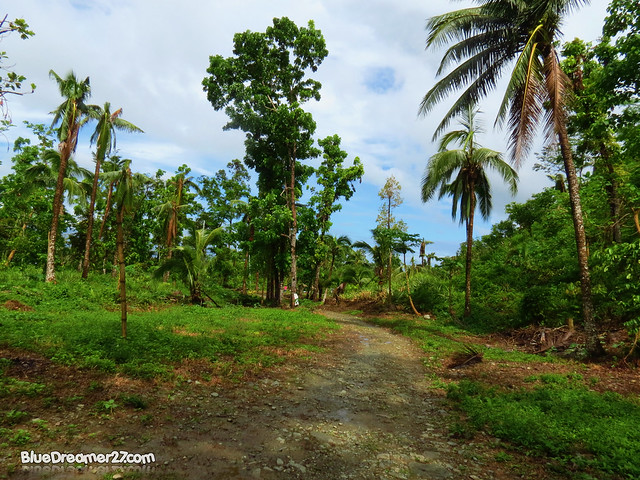 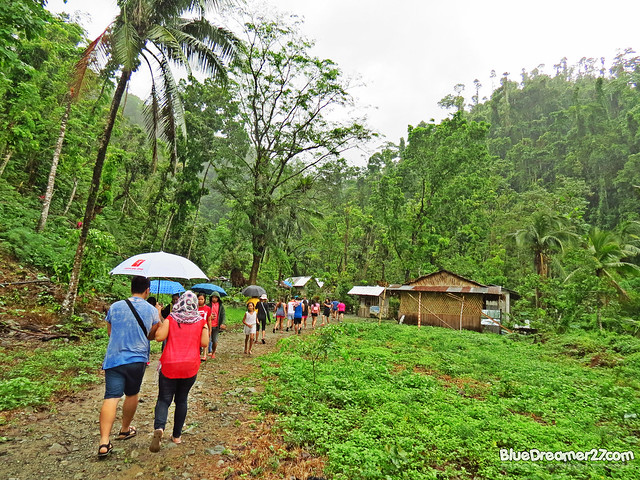 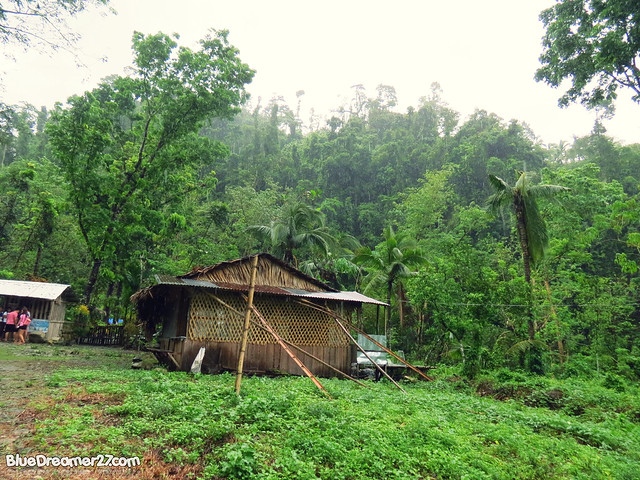 It was still raining by the time we get there so we were all welcomed by the muddy trail going to Amatorio Resort. 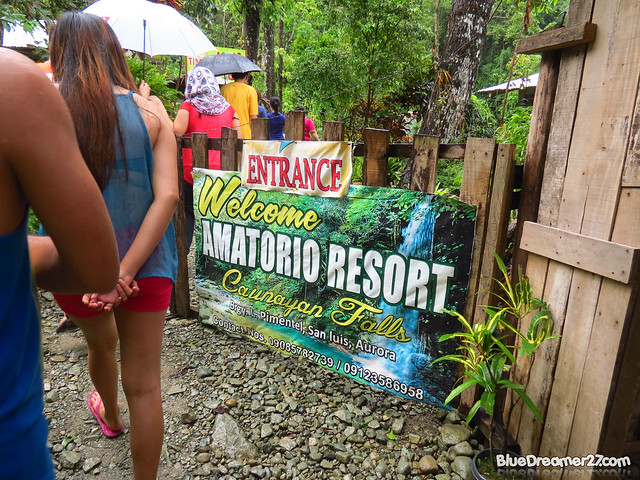 The entrance to Amatorio Resort. I am not really sure if this is the only way or entrance to Caunayan Falls but the resort only charges Php20 per head (adult) and Php 100 per cottage. I think there are more or less 8 cottages on the resort.

The panaramic view of Caunayan Falls 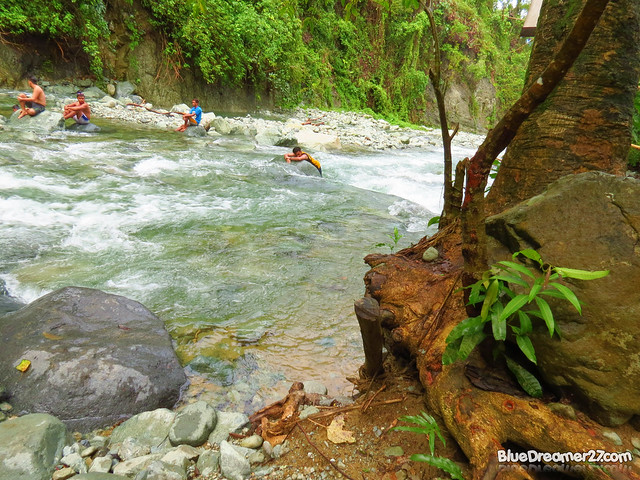 The first thing I noticed about Caunayan falls is the cascading water of the stream. I’m not sure where exactly this strong current of water is coming from but on the far right side is a cliff where this water continues to flow. 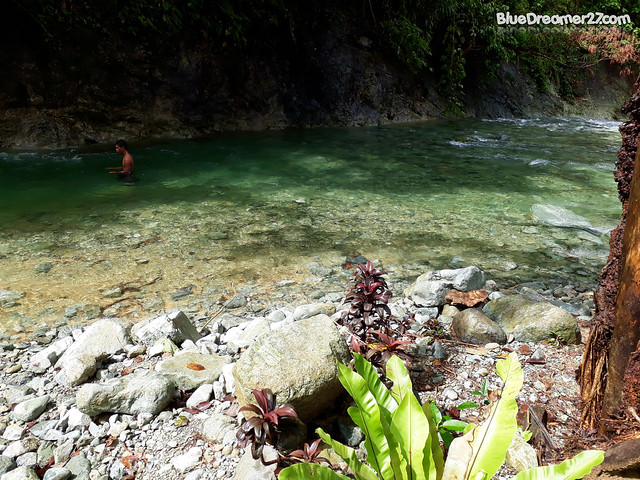 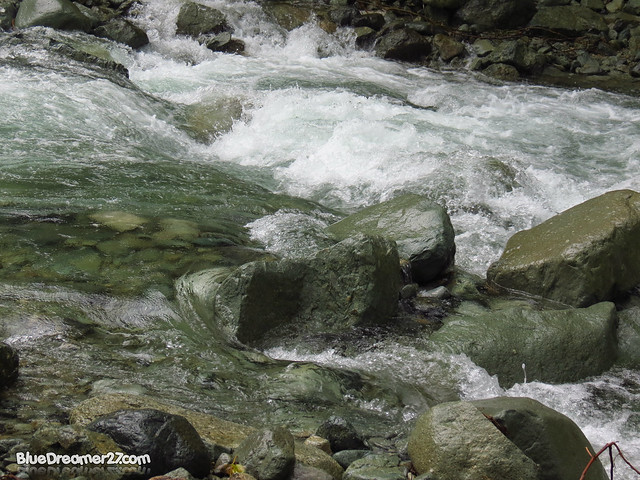 The catch basin is not deep at all (it was less than waist-high) and you can easily fall in love with its crystal clear water and soft sand bottom. Just be cautious though because the current was quite strong especially near the catch-basin. 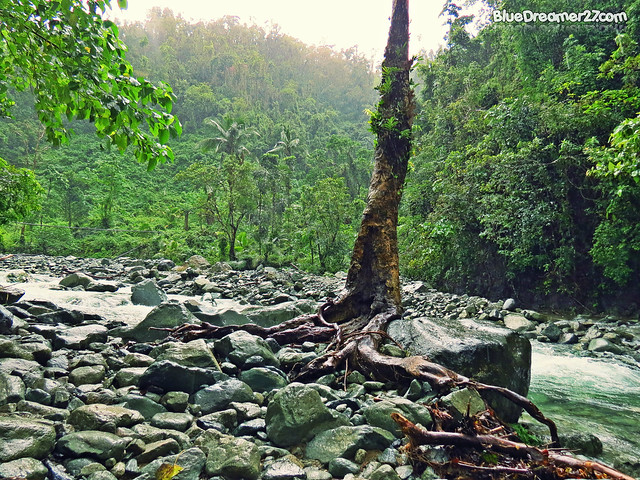 Another notable feature of Caunayan Falls are the boulders of huge rocks with varying sizes. 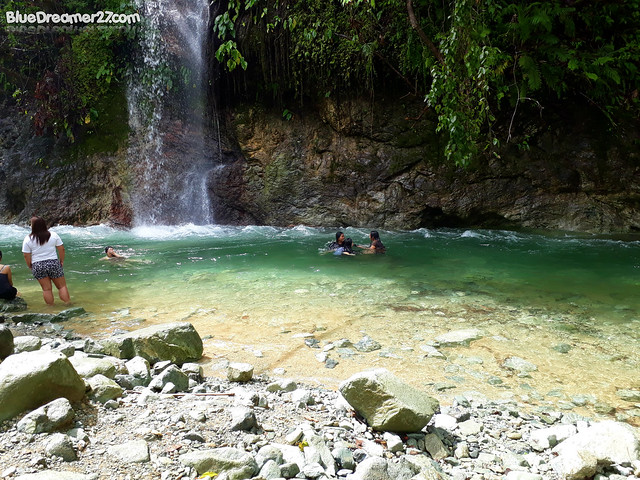 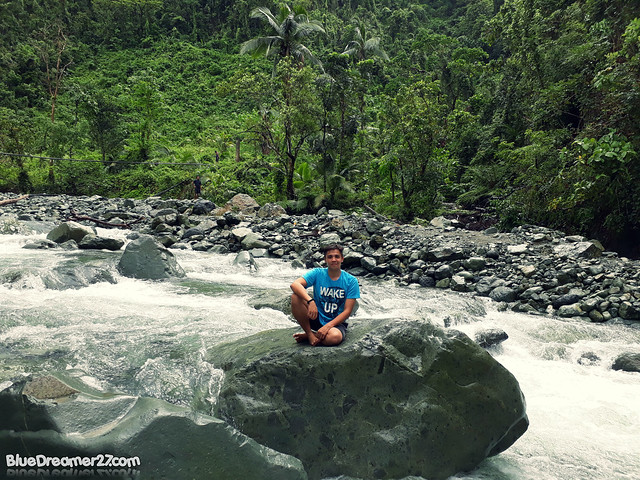 And,… there’s me on top of one biggest boulder in Caunayan Falls 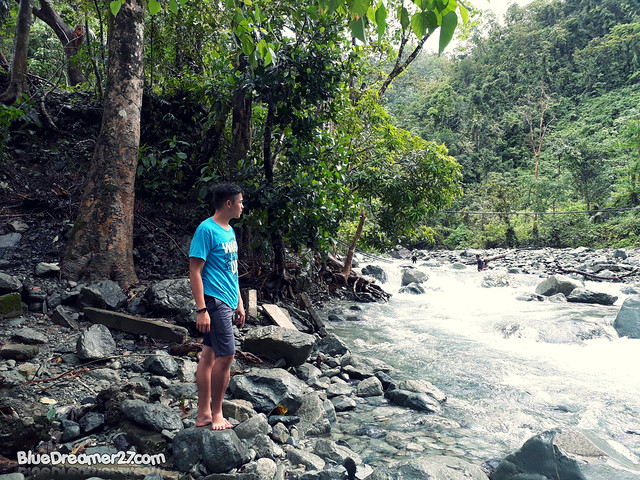 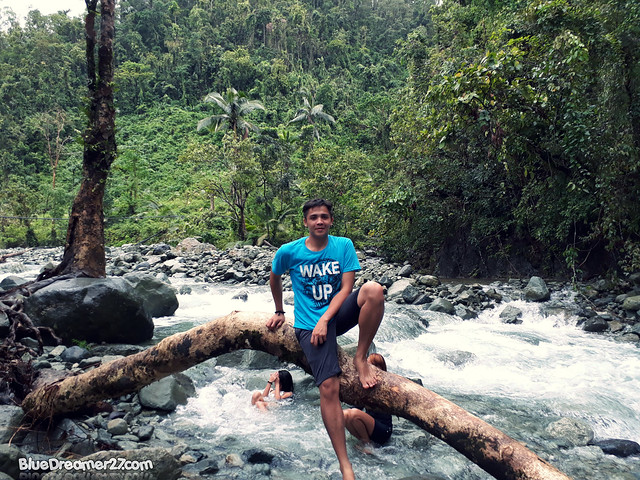 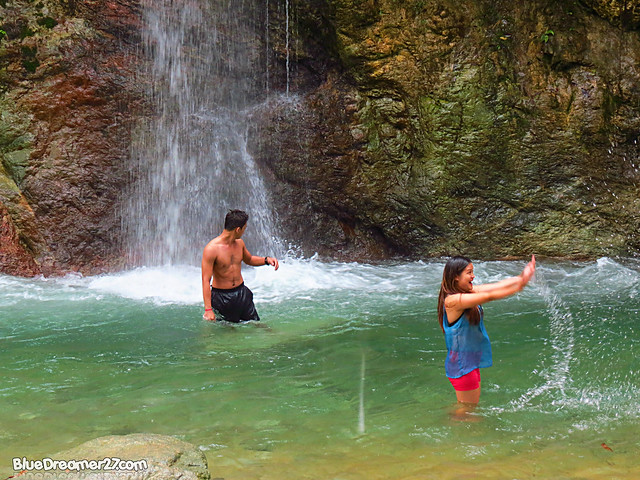 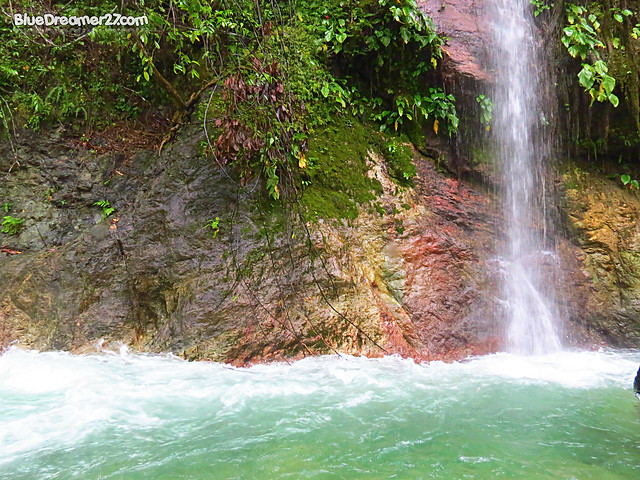 After spending some time with Caunayan Falls, we all decided to conclude our tour and go back to Manila. It was generally rewarding and absolutely an awesome experience that I will never forget. I had my first surfing experience and I really wouldn’t mind going back. 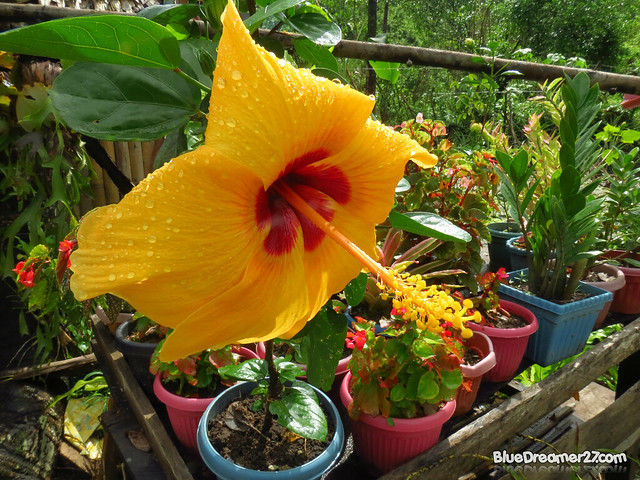 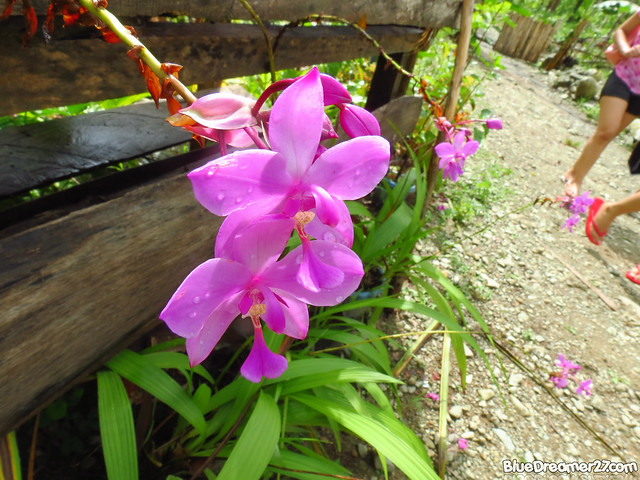 Things to consider Before Going to Caunayan Falls
► Caunayan Falls is easier to access than Ditumabo Falls
► The entrance fee to Caunayan Falls is relatively cheaper too. (Php 10 for kids / Php 20 for adults)
► Cottage can be rented for Php100 and is good for 5-6 pax
► The water is only waist-high deep
► There are publicly accessible comfort rooms nearby
► No Overnight stays
► Water current is very strong so be cautious especially if you are with kids.

How to Get to Caunayan Falls
►You can actually ride a Transit bus from Cubao via Genesis Bus which will take you directly to Baler. These airconditioned buses has daily trips from 3Am to 7:30 Am with 6-7 hours travel time. The fare would cost you around Php550-600 per head.
►Upon reaching Baler, you can hire a jeep or a private vehicle that will take you to Barangay Real in San Luis. From there, you can just walk from the end of the road near the river and you will see the Caunayan Falls.

Oops, we are not yet done, I got one more entry about Baler and this time, it’s about the things you should buy when visiting this town! 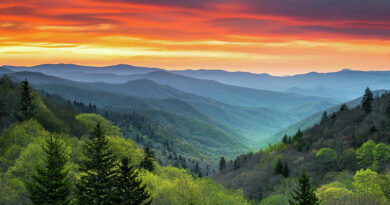 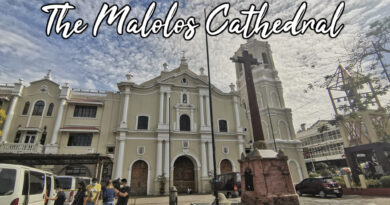 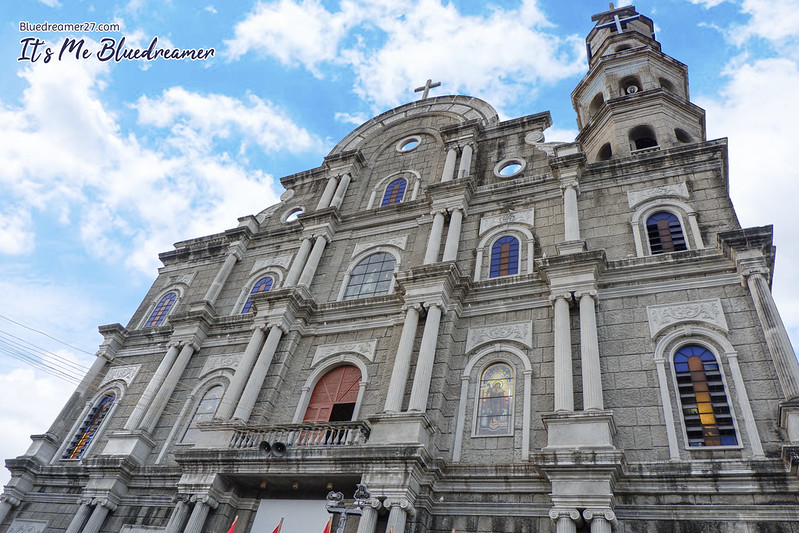 Churches And Chapels To Visit In CAVITE CITY During Holy Week

One thought on “Baler Escapade : Caunayan Falls of San Luis”