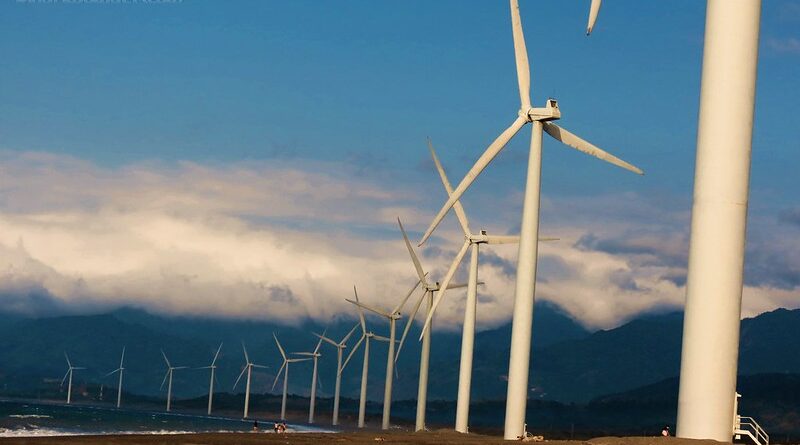 I guess it is safe to say that a trip to Ilocos will not be completed without visiting the picture worthy attractions offered by the Bangui Windmills. Those windmills in Burgos (Check : Burgos Windfarm and Kapurpurawan Rock Formation) might put those people with OCD on whack but those in Bangui will put them back in calm state due to its straightly aligned windmills along the shore. 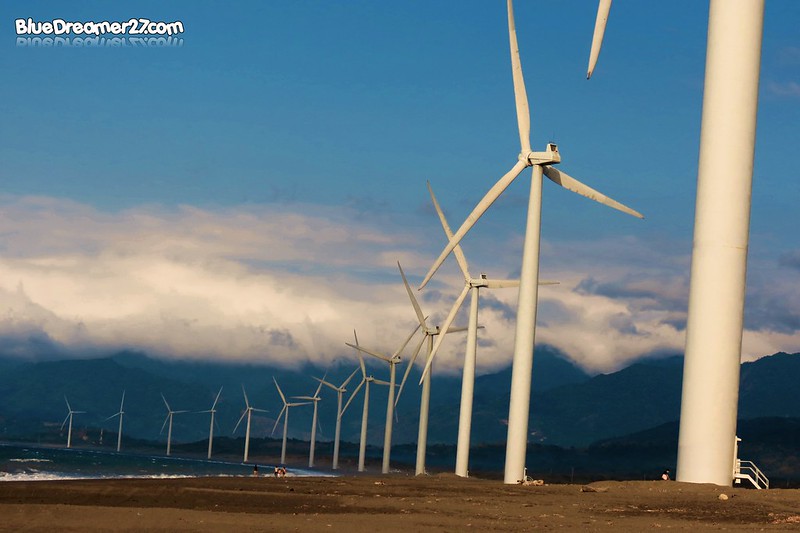 Interestingly, we no longer have plans to visit the Bangui windmills that day because most of our elder members (who were probably so tired) were already satisfied by what they saw in Burgos. THANKS GOD, someone from our team insisted to visit the Bangui, otherwise, it will be a very disappointing Ilocos trip. Take note, I never get the chance to try the 4X4 Ride or even the Sand boarding in Paoay Sand dunes (Check: Paoay Sand dunes) so missing this out will make our Ilocos Norte trip quite incomplete. So we all decided to visit the Bangui Windmills before heading to Pagudpud, supposedly our last stop in Ilocos Norte. 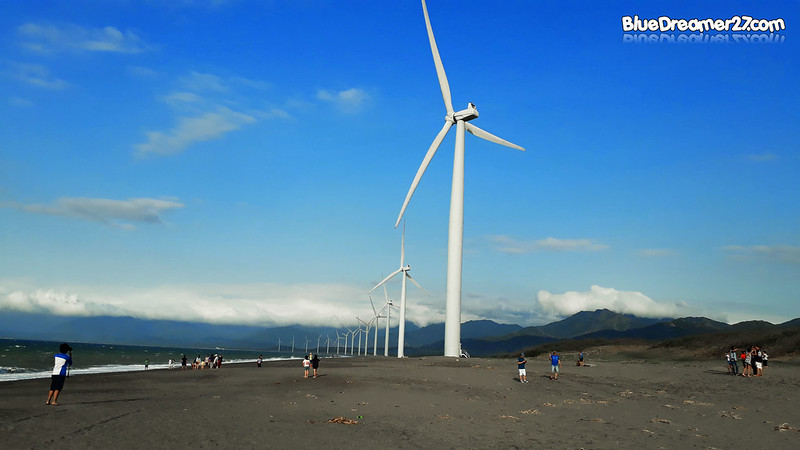 To give you some interesting information about Bangui Windmills, the Bangui Windfarm is composed of 20 units of  230ft high Vestas wind turbines. What makes them so distinctive is that they are straightly arranged in a single row along the shoreline of Bangui bay which stretches up to nine kilometer long. It is a game changing project not just in Ilocos region alone but for the entire country. The 20 units are capable of producing a total of 33 MW. The Bangui Windmills wind farm is recognized as the largest in Southeast Asia and sells power Ilocos Norte Electric Cooperative (INEC). Although the Mindoro Windfarm (located near the Puerto Gallera) is expected to become  the largest in the country generating an estimated 48MW of electricity once completed. 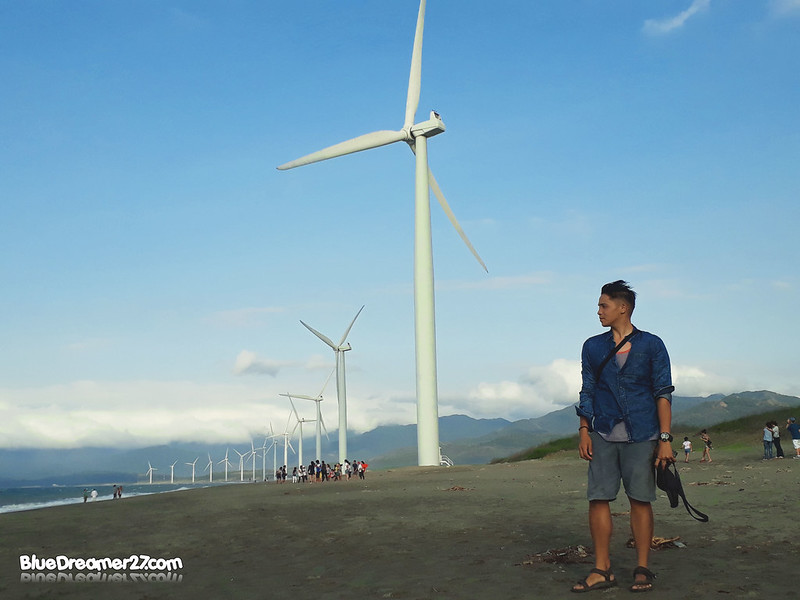 The milestone reached by the Bangui Windfarm proved that our country can soon venture into a more sustainable and renewable energy. Aside from Bangui, we have seen the Burgos Windfarm which covers a larger scale and also another windfarm in Pililla Rizal (Check : Pililla Windfarm)

The wonderfully aligned row of wind turbines and the striking view of the Bangui Bay makes this place a picture worthy and has become one of the most visited attractions in Ilocos. What makes this attraction even more recommendable? It can be accessed by everyone for FREE! Yes, there’s no entrance fee nor environmental fee involved just like the Pililla Windfarm in Rizal. 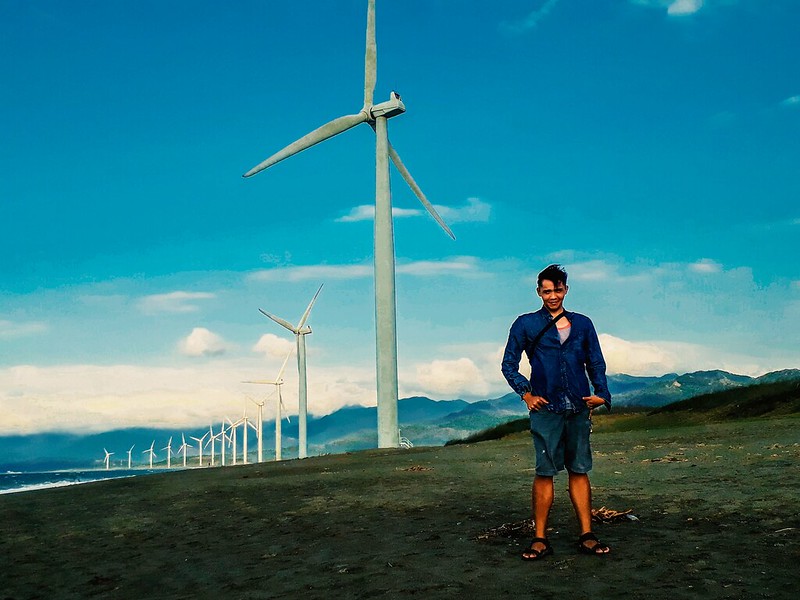 Despite having no fees being charged, the place is surprisingly well maintained. It is very clean and you can really appreciate the picturesque view of the windfarm from one end to another. I am not really sure if people are allowed to go for a swim but the waves are quite aggressive when we get there. The best way to visit the Bangui windmills is either before the sunrise or sunset in order to get that Instagram worthy shot capturing these gigantic fans! 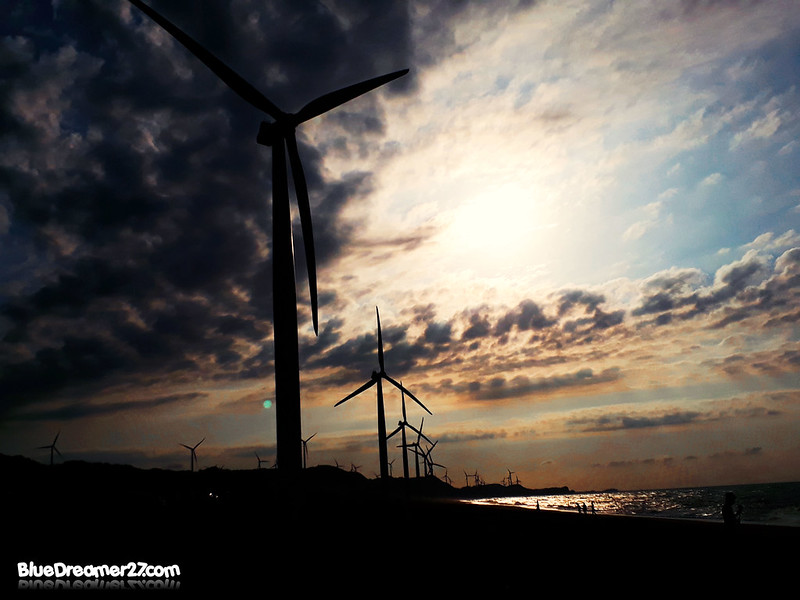 After capturing some photos and spending some time marveling the beauty of the Bangui windfarm, we left the area and headed to our last spot! The Maira-Ira resort and Residence in Pagudpud. We were expecting to witness the resort’s most notable attraction, the Blue Lagoon! 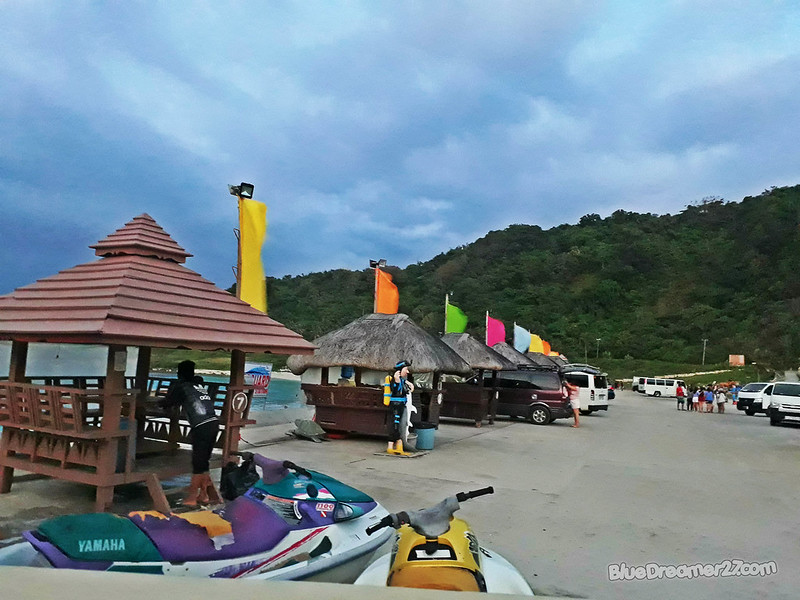 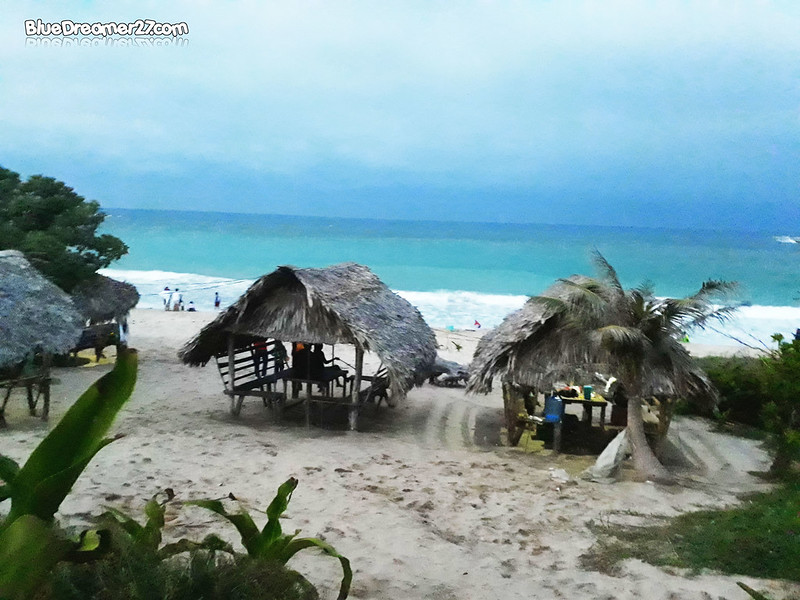 Well, we managed to reach Pagudpud but we didn’t expect that we will arrive there almost dark. It was passed 6 pm and the sky is started to dim. Adding more to our disappointment, the resort’s swimming pool is already closed! 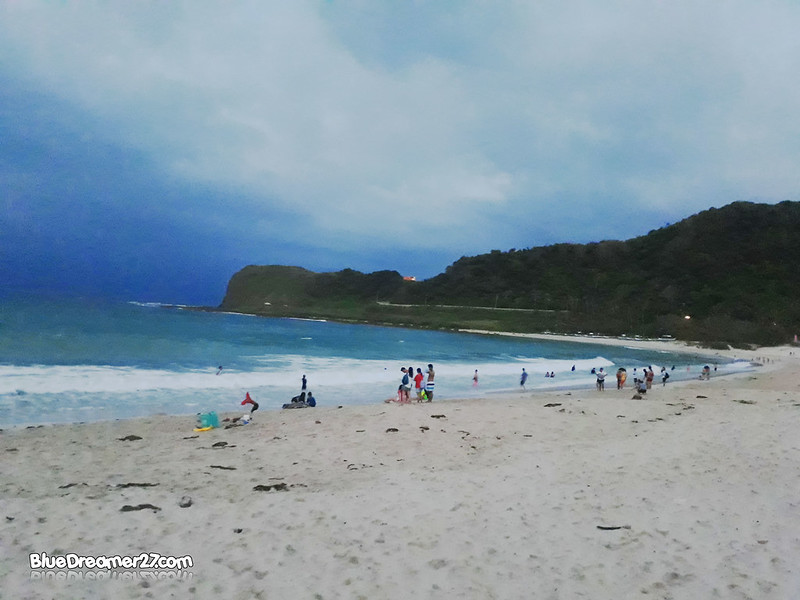 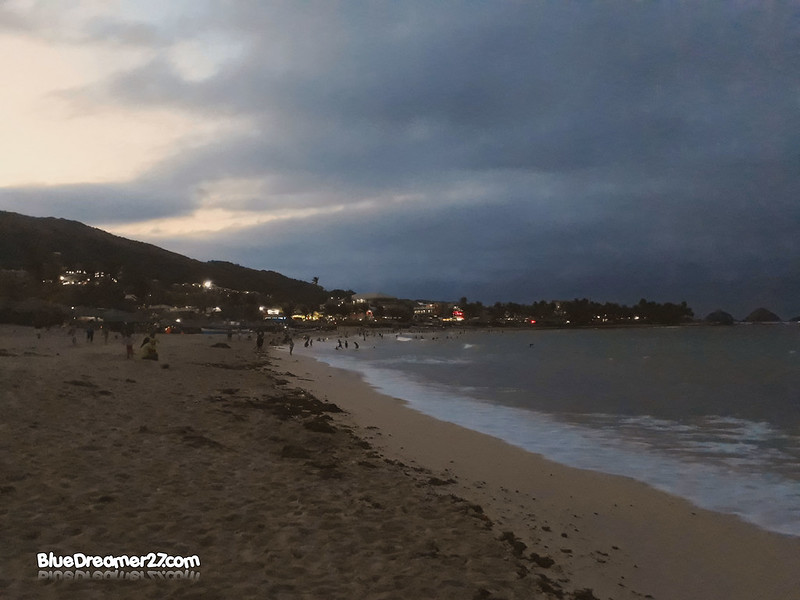 Well, interestingly, we spotted some noteworthy attractions including their classy themed hotels and that Hollywood-sign-like Hannah’s Beach resort which can be viewed from afar. It left us no choice but to go back but since we did not want our long travel time from Bangui to Pagudpud to be wasted, we grab the chance to take as many photos as we want haha. 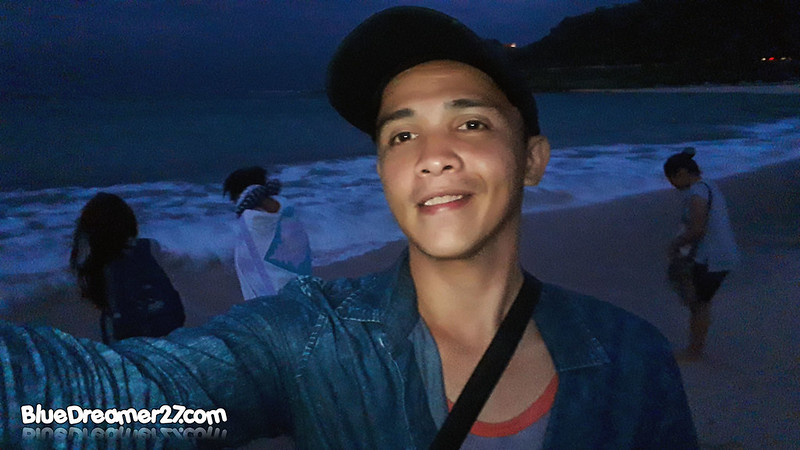 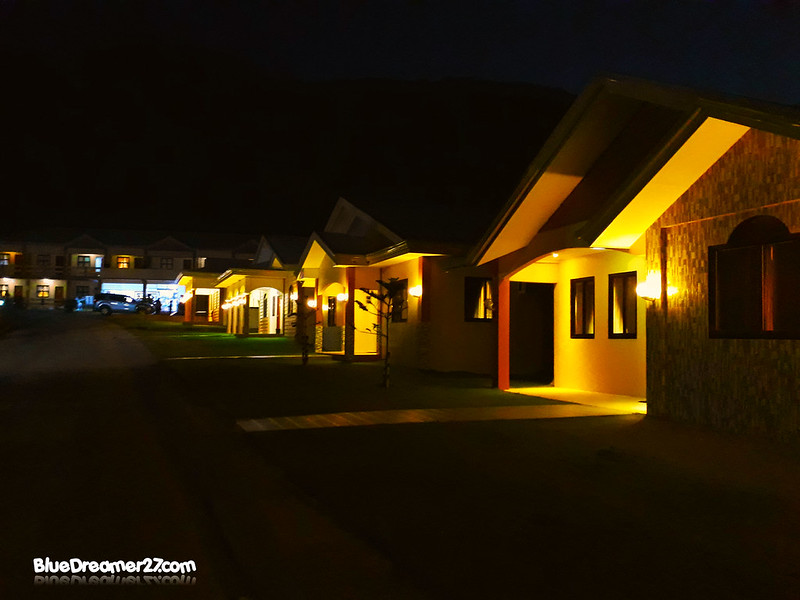 It was so dark and we did not even get a decent shot of that Blue Lagoon which gives me another reason to go back! Love their residence area by the way!

Things You Should Know Before Going to Bangui Wind Farm
►There are 20 operational Windmills in Bangui Winbdfarm
►Bangui Windfarm is the first windfarm in the Philippines
►Each turbine is capable of producing 1.65 MW while all the 20 can produce a total of 33MW (enough to supply power to 40 to 50% of Ilocos)
►THERE IS NO ENTRANCE Feee in Bangui Windmills

How to Get to Bangui Windmills
The best way to explore Ilocos Norte is via private car or better yet hire a private van and driver to save more time and money (since 12 pax can split the whole cost). There are buses in Vigan though that are bound to Pagudpud. You can drop off to Bangui but it will also require you to take a trike to drop you to the Bangui Wind farm site. 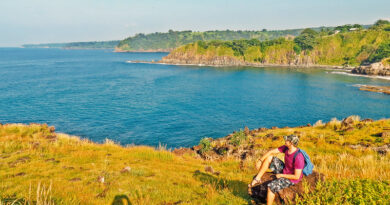