5 Amazing Reasons Why You Should Play Guitar

If there is one kind of musical instrument that I would love to master, it would be a guitar! I usually have this kind of perception that learning how to play a guitar is more of a talent rather than a skill but everything changed after that “Sulyap Sa Quiapo” lecture series. In one of the talks, the lecture speaker shared us his own experience on how he learned to play an ancient musical instrument.  He clearly told us that he is not a musical prodigy or whatsoever and he started out from nothing but with passion and willingness to learn, everything is possible. For someone like me who has no musical background,  I find it really inspiring and it made me realized that it is not too late for me to learn how to play the guitar. I came across a lot of websites and read numerous articles about guitars and now I am listing down 5 of the great reasons why someone should play guitar! 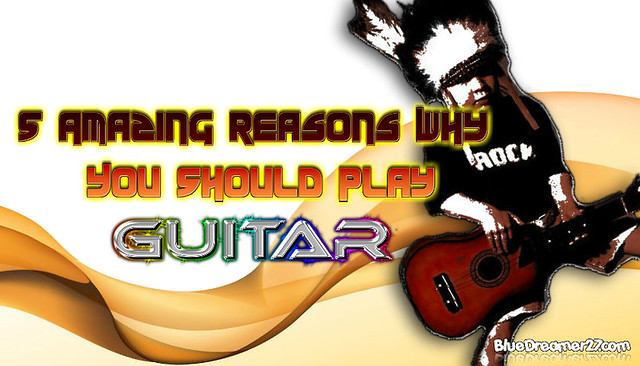 1.There Is A Lot of Rooms To Explore!

Once you have finally learned the basics, you can now put your skills into an all new level by exploring other techniques and styles. Playing guitars will indeed open a lot of rooms to explore. It will test the best of your creativity as you try to make your own music compositions. In addition to that, once you have mastered playing a basic guitar, you can soon venture to other types like bass or electric.

2. A Tool Of Expression

Much like how poets express their feelings through their poems and other form of writings, guitar players can do the same not just by writing their lyrics but also by composing a music that allows them to share their feelings to others.  Music can make a huge differences. It brings some kind of relaxing feeling that we can all embrace by simply listening to it.

A Study shows that listening to music and playing musical instrument will take your mind off. It is a perfect way to unwind and to keep all your stress away. Listening or better yet making music will set your mood and will somehow at some point will help you forget all your worries and problems. There were also some studies that proves that those who play instrument have sharper brain function which can help them guard themselves against mental decline in the future.

4. A Great Way To Gain Friends That Shares The Same Passion

Although guitar is a kind of instrument that can be played alone, it actually works more effectively if it is accompanied by other musical instrument, thus a guitarist is often involved in a band or any music group. It doesn’t matter what kind of guitars you have! Whether you got greg bennett guitars, Fenders, Taylor or Gibson guitars, you can always find someone who is willing to jam with you! It’s just so nice that through this, you can easily find someone who shares the same passion with you which will eventually lead to a great friendship right?

5. It Gives You Confidence

How cool it is to see someone who knows how to play a guitar! The mere fact that people has this perception that those who knows how to play such instrument is cool will somehow give you a boost of confidence and something that will definitely enhance your self esteem. Playing guitar, after all, is an effective crowd pleaser!

I am an insomniac and obviously, I find it hard to get a nice sleep every night. I usually take sleeping pills before but I was forced to stop because

It’s fascinating to see how things rapidly change because of the modern technology that people are embracing today. Internet for example is such a powerful tool that offers a bunch

Comparing yourself with others is dangerous as it brings fear and inferiority into your life. When you analyze yourself and your abilities in the sight of other and their abilities,