A trip to Antipolo will not be completed without visiting the well known Cathedral of the city. Antipolo on the first place will not be dubbed as the Pilgrimage capital of the country for no reason. The Cathedral is probably well known as the shrine of Nuestra Señora de la Paz y Buen Viaje or Our Lady of Peace and Good Voyage who is also the Patroness of Antipolo. 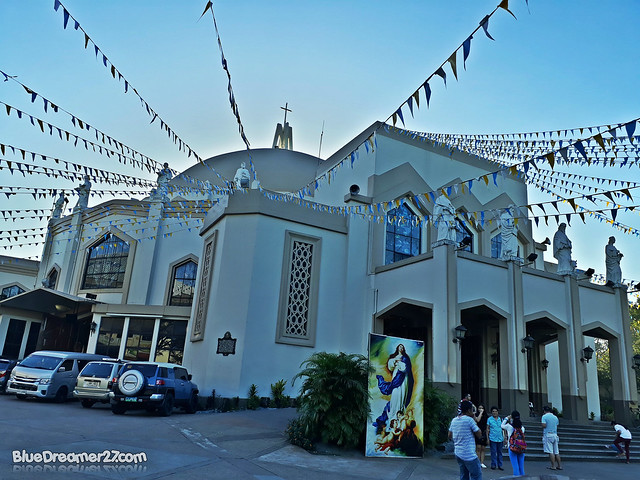 Did you know that the church was supposed to be built on a different location? It was originally built to enshrine the miraculous image of Our Lady of Peace and Good Voyage (an image originated from Mexico) but instead of settling on a different location, they have chosen to establish the church on the site where the Tipolo tree is located. They said that the miraculous image was found under this tree after vanishing several times from the shrine. 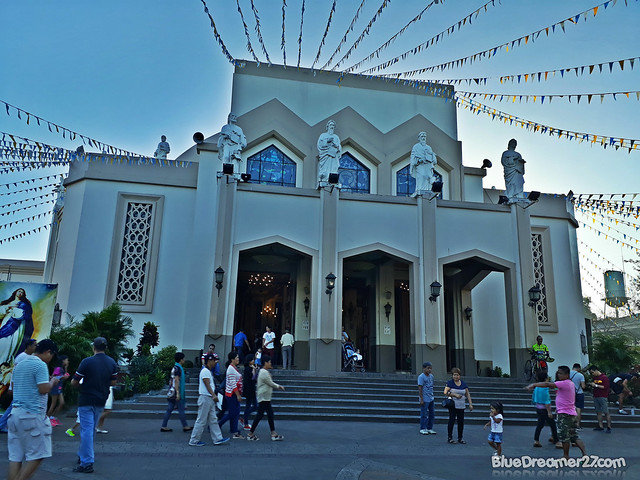 The facade of Antipolo Cathedral 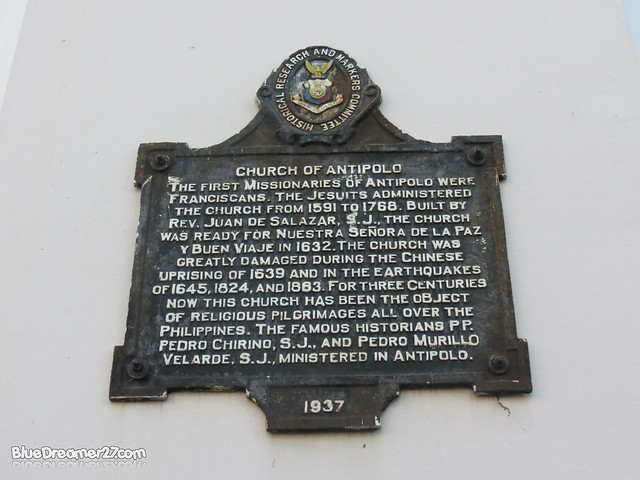 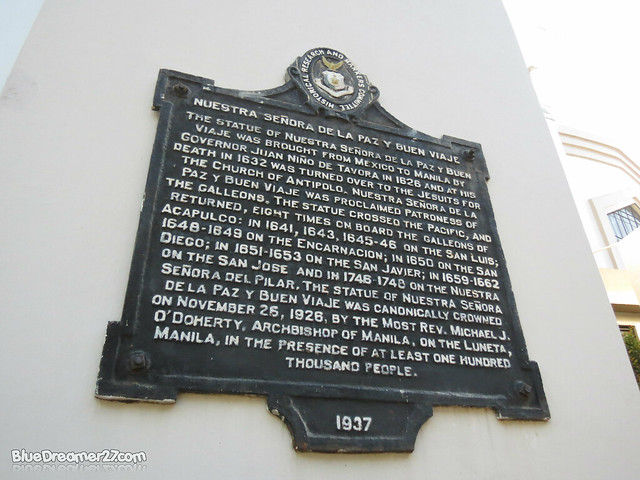 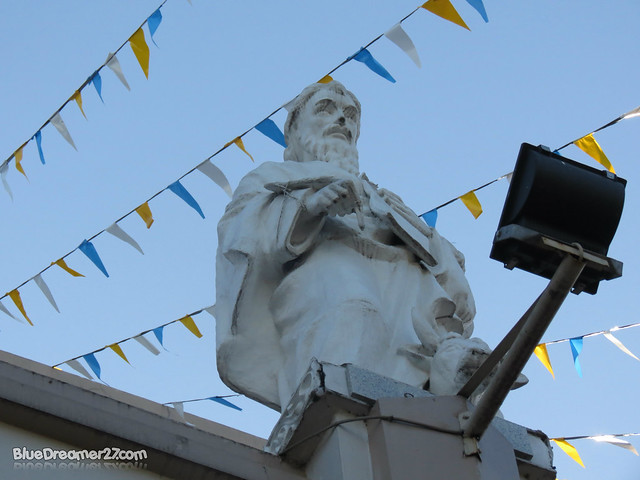 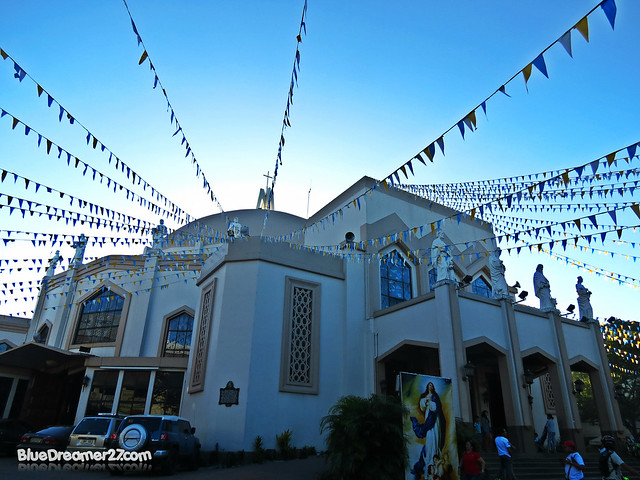 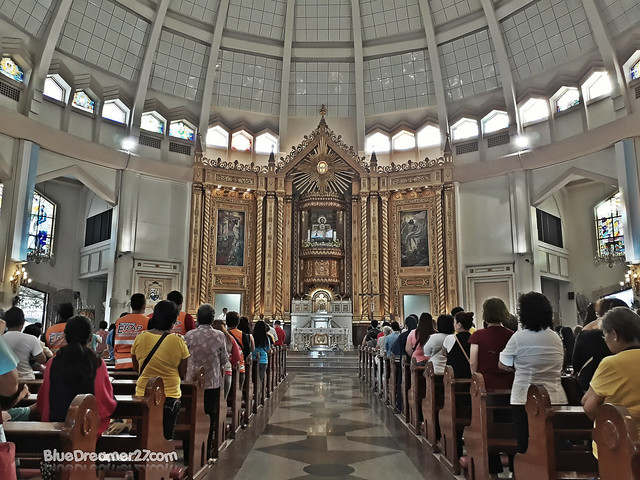 The nave of Antipolo Cathedral.

“Jose Rizal”
Another interesting fact! Did you know that our national hero Jose Rizal is also a devotee of the image? Rizal and his father went on a pilgrimage here to fulfill the vow made by her mother after giving birth to him. Rizal even mention the image in some of his writings.

The church features a high altar that enshrines the image of Our Lady of Peace and Good Voyage. 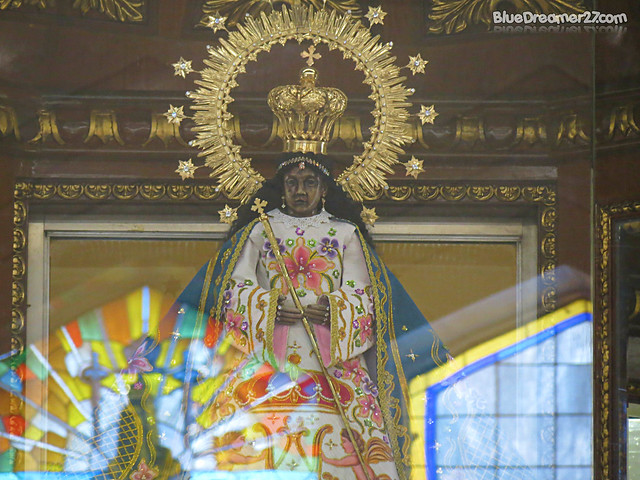 The image of Our Lady of Peace and Good Voyage.

“The Image”
Nuestra Señora Dela Paz Y Buen Viaje is a 17th-century Roman Catholic wooden image of the Blessed Virgin Mary and was brought to the country by Governor-General Juan Niño de Tabora from Mexico via the galleon El Almirante in 1626. His safe voyage across the Pacific Ocean was attributed to the image, which was given the title of “Our Lady of Peace and Good Voyage“. The statue is one of the most celebrated images of the Blessed Virgin Mary in the Philippines, gaining devotees since the mid-19th century. 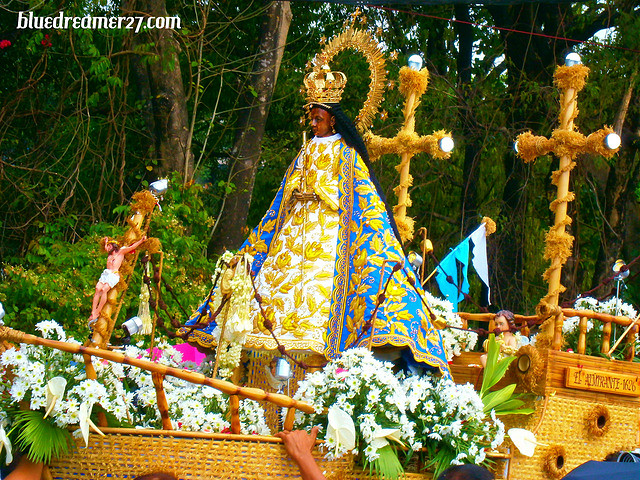 “The First Processsion”
The first Tuesday of May marks the start of the Pilgrimage season in Antipolo. They held a special mass followed by a long procession in which the image of the Our Lady of Peace and Good Voyage is brought to the so-called Via Dolorosa (formerly known as the White Cross) on the outskirts of the city, overlooking Metro Manila. It has been an annual tradition not just for the Antipoleños but for all devotees to our Lady of Peace and Good Voyage all over the country. (Check : The First Procession in Antipolo) 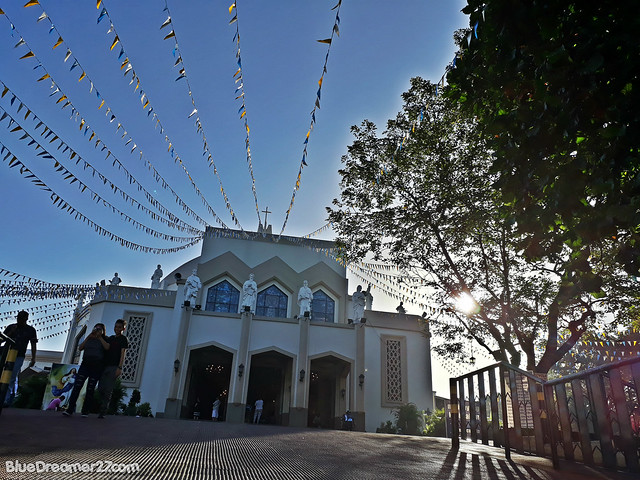 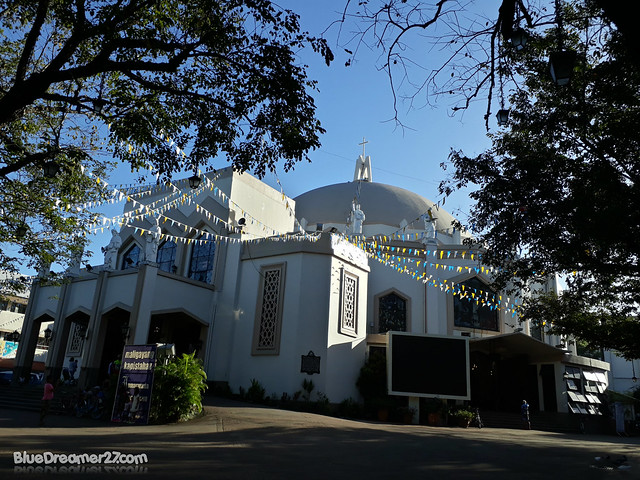 The church’s facade as seen from the Southwest 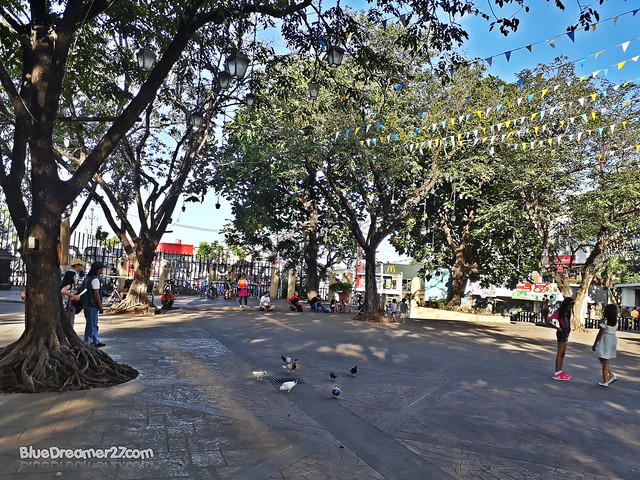 Landscape outside the church. 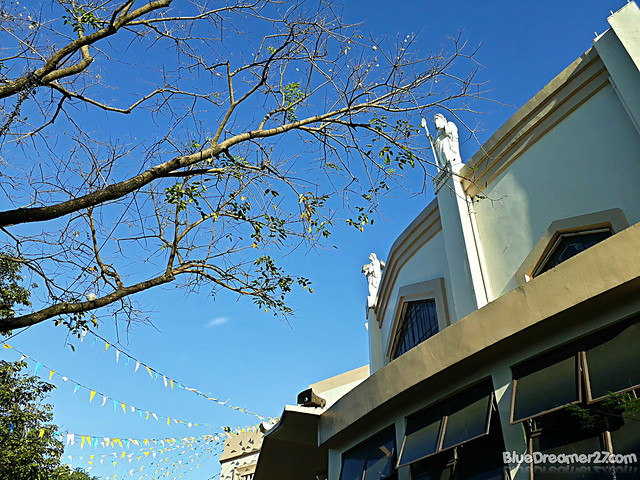 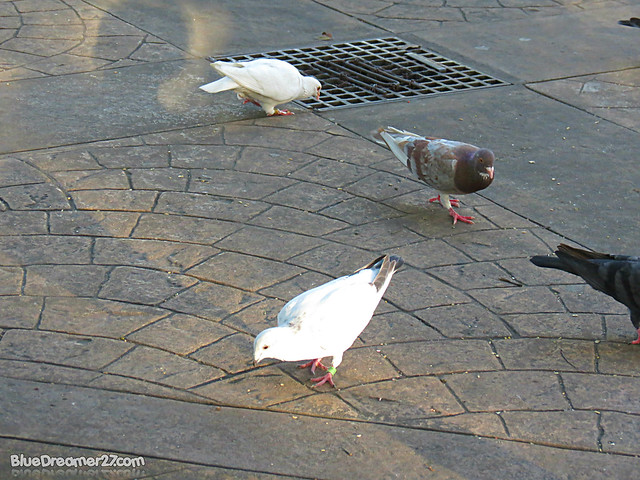 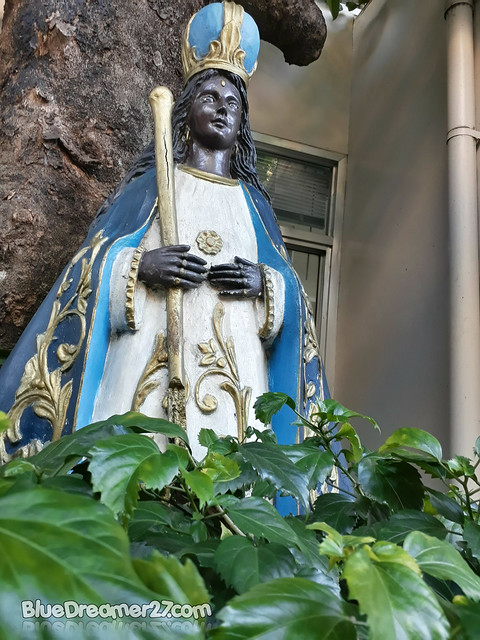 The replica image of Our Lady of Peace and Good Voyage at the back of the church (in front of their souvenir shop). It is intentionally placed under the tree to depict those miraculous appearances of the said image under the Tipolo tree. 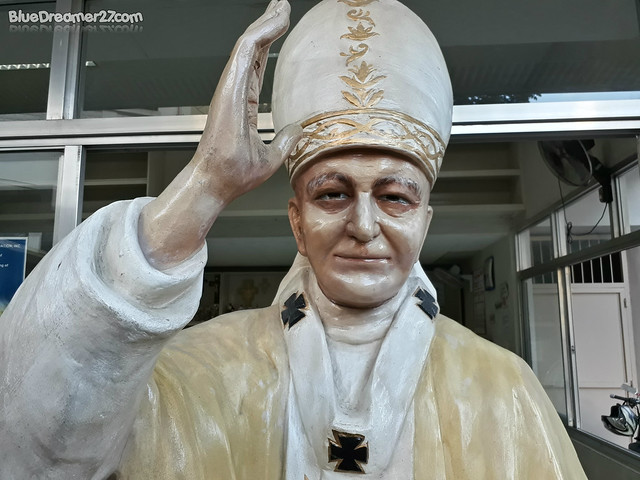 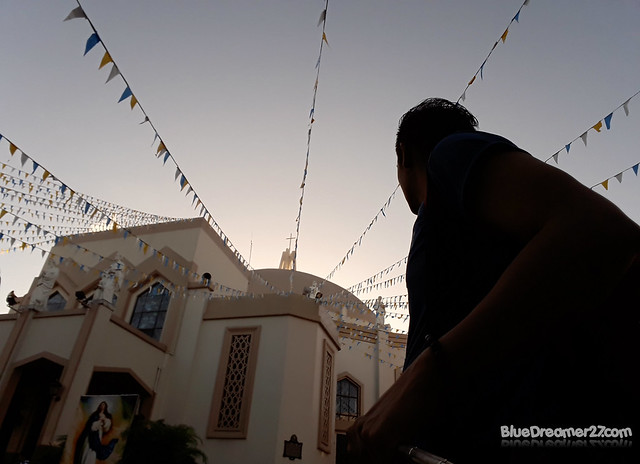 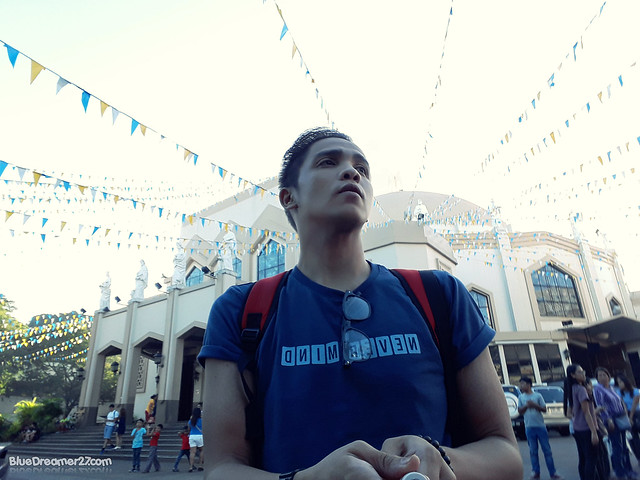 I really appreciate the fact that we started our Antipolo Tour by visiting the church. It was indeed a great way to start our journey for that day!

After attending the mass and had our quick breakfast, we headed to our next destination which is not too far from the Cathedral. One of the most popular destinations that is always wired to Antipolo because of the famous song that invites people to bathe in! The Hinulugang Taktak falls.

How To Get To Antipolo Cathedral
►Antipolo is accessible by jeepney or FX taxi, with terminals in Metro Manila including one in Araneta Center Cubao and Valero Street behind RCBC Plaza in Makati. This will drop you off to Antipolo’s Town Proper. From here, you can ride a tricycle which can take you to all nearby destinations including the Antipolo Cathedral. Places along the main roads are accessible by jeepney.

Where to Stay in Antipolo 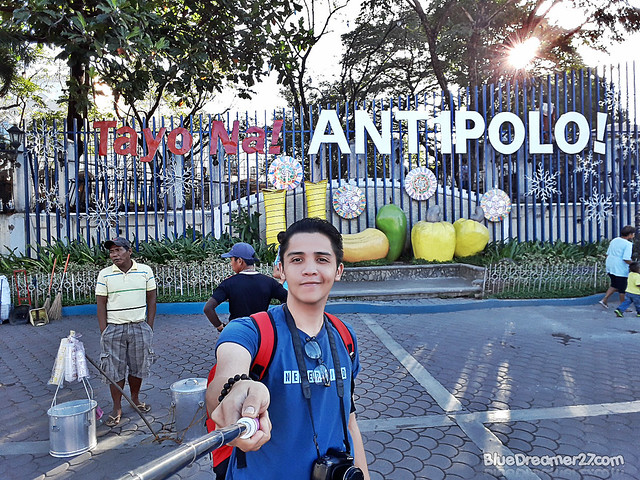 For those who are looking for a nice place to stay in Antipolo whether you are in a tight budget or not, you might consider this list of hotels and resorts in Antipolo as compiled by TravelBook (with discounted rates too). Again, Antipolo has so many great places to offer that you guys can explore and a day tour may not be enough to discover them all.

I actually have a mixed reaction with this famous tourist destination in Antipolo and I’m going to share it with you in my next entry.

Feel free to watch the Video Summary of my Biyaheng Antipolo below and please don’t forget to subscribe. Thanks

We left Manila around 10 in the evening and it took us almost eight hours to reach San Andres, Quezon. Unlike what we have seen in Paracale Bay going to Calaguas, 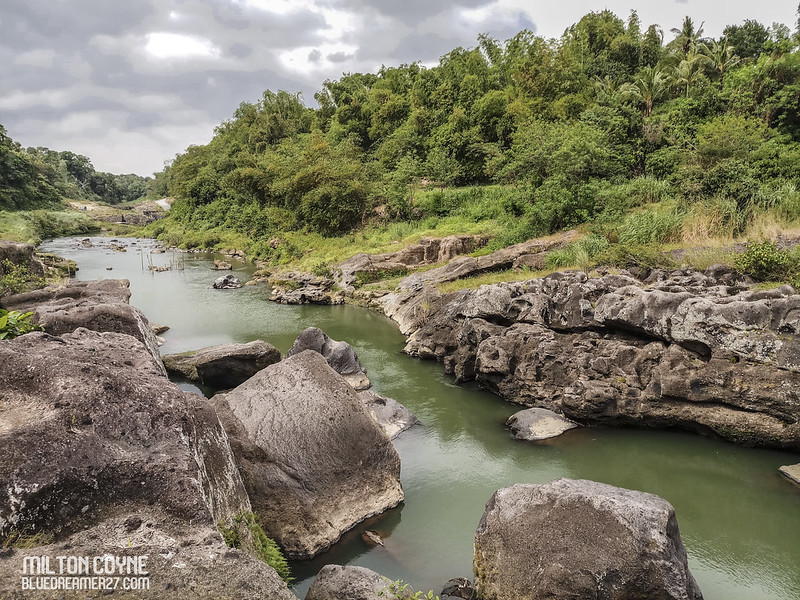 Maragondon Cavite is probably known to many because of the famous Pico De Loro Mountain or maybe as the place where Andres Bonifacio was sentenced and killed. Interestingly, Maragondon has