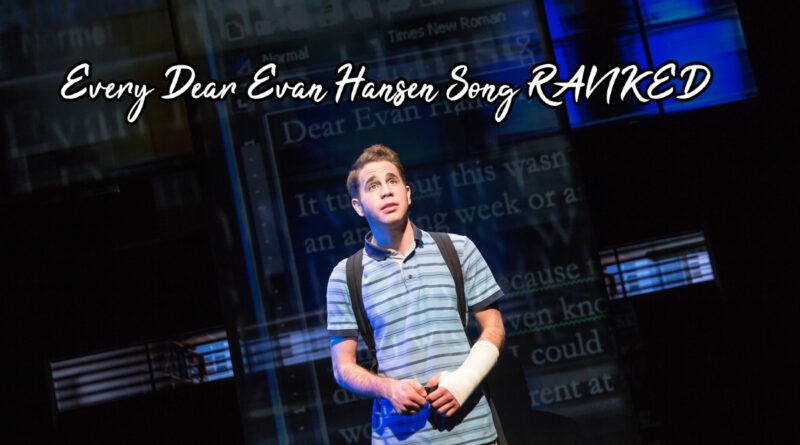 Many musicals have been adapted to movie recently. The movie adaptation of the critically-acclaimed The Prom was introduced to Netflix last year and In The Heights made it to the big screen early this year. Interestingly, we are just getting started because there are many more musicals to hit the theater this year including “Everybody’s Talking About Jamie“, “West Side Story“, and “Tick, Tick, Boom“. The one I am really hyped about is Dear Evan Hansen. It is one of my favorite musicals ever and I simply love the wonderful message it conveys.

Dear Evan Hansen tells the story of a young man with social anxiety disorder. When one of his schoolmates committed suicide, he was placed in a situation when he had to force himself to fabricate a relationship with that deceased student. With the help of his friend, Evan invents a fabricated email account to “prove” their friendship, and when a fake suicide note makes its way online, Evan finds himself the unintended face of a viral video about loneliness and friendship. This eventually changed his life but when his secret was unfolded, he had to make a choice whether to choose live the fabricated life who always wanted or embrace the reality he was in. 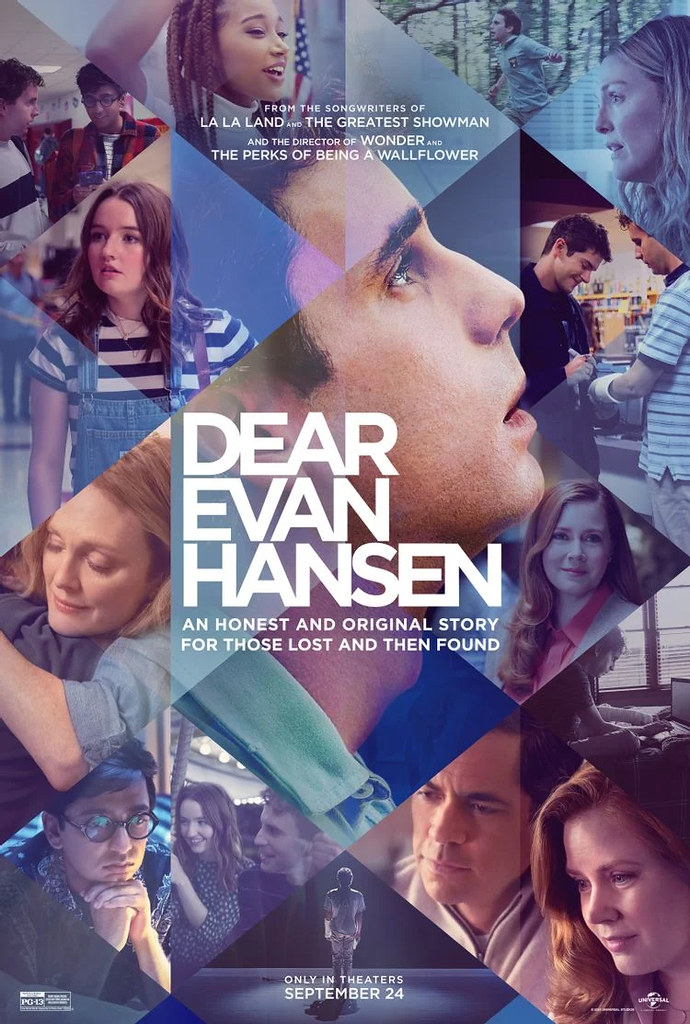 We are not yet sure if the movie adaptation will remain faithful to the original material but Ben Platt will reprise his role as Evan Hansen along with many great stars like Amy Adams (Cynthia Murphy), Kaitlyn Dever (Zoe Murphy), Julianne Moore (Heidi Hansen), and more. What really intrigues me is if they will bring the entire music catalog to the movie. It was confirmed though that some of the flagship songs from the musical like “Waving Through A Window” and “You Will be Found” will be included in the film. The film also made collaboration with the brilliant duo Pasek and Paul to add new songs to the roster.

I must say that Dear Evan Hansen has a great list of songs. I personally love the entire catalog in this musical as they were notably catchy, meaningful, and have unique tune that you can easily differentiate to classic Broadway music. While we all wait for the epic movie adaptation, i decided to rank down every Dear Evan Hansen songs.

Disclaimer: This list is ranked subjectively. I also added Spotify clips so you can listen to them. 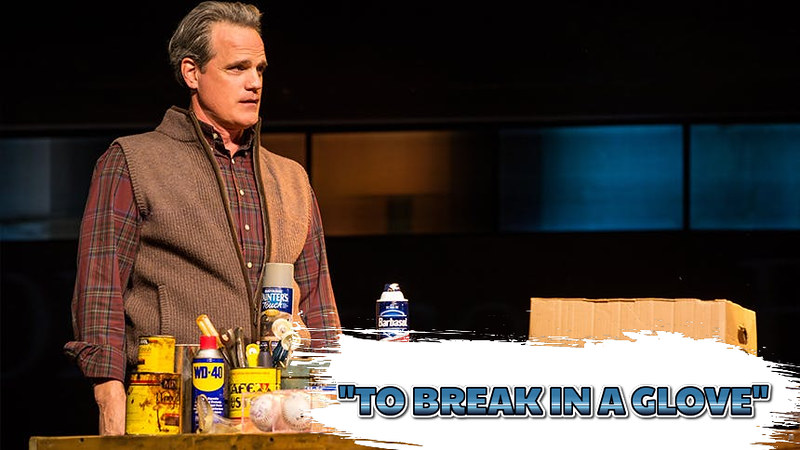 To Break in a Glove is my least favorite songs from the catalog not because it’s bad but it’s just that the song doesn’t connect much with other songs from this musical. This song, however, features an important part of the story. Here, Larry Murphy and Evan had a small conversation about how to break in a glove but it eventually highlights Larry’s tough relationship with his son Connor and why he intentionally pretend to be tough because he thought it was the right thing to do to discipline his son. It also shows how Evan has been wanting to experience that paternal love since he almost grew up without his father. 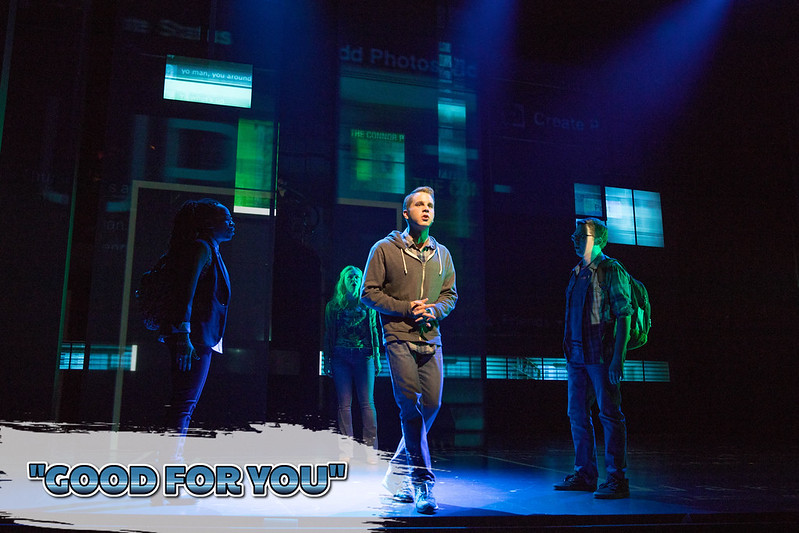 This is one of the climatic songs from Dear Evan Hansen. This is the part where Heidi (Evan’s mom) discovered his son’s recent whereabouts. She discovered that Evan is spending lots of his times with the Murphy’s and how much he enjoys their company. Evan also had a conflict with both Jared and Alana. Generally, the song shows how Evan went too far from his fabricated story and how he almost left everyone behind him just to embrace this new-found life with the Murphy’s. This song comes with powerful lyrics that conveys anger and guilt. 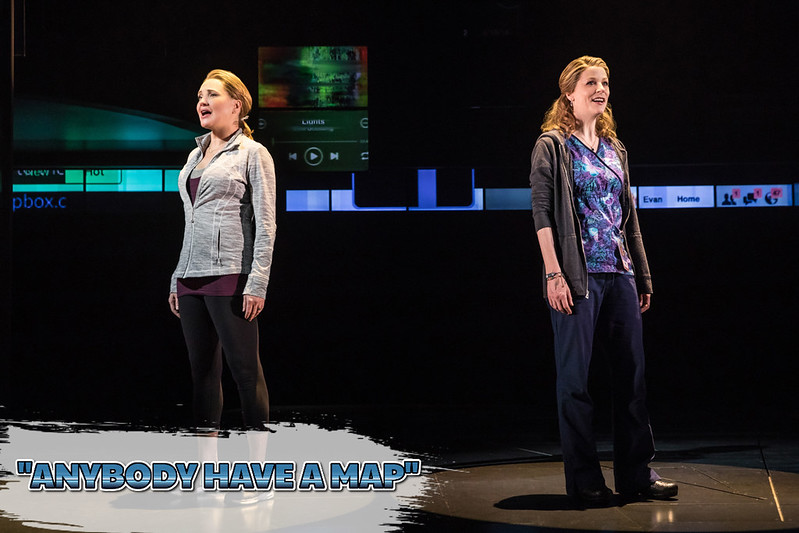 Anybody Have a Map is the very first song from this musical. It introduces us to Heidi Hansen and Cynthia Murphy and how they struggle to deal with their family. This tells us that despite the difference between their social status, they do share something in common, they both struggle to connect and understand their kids. I love the overall structure of this song especially the part where Cynthia and Heidi blends their powerful vocals together. 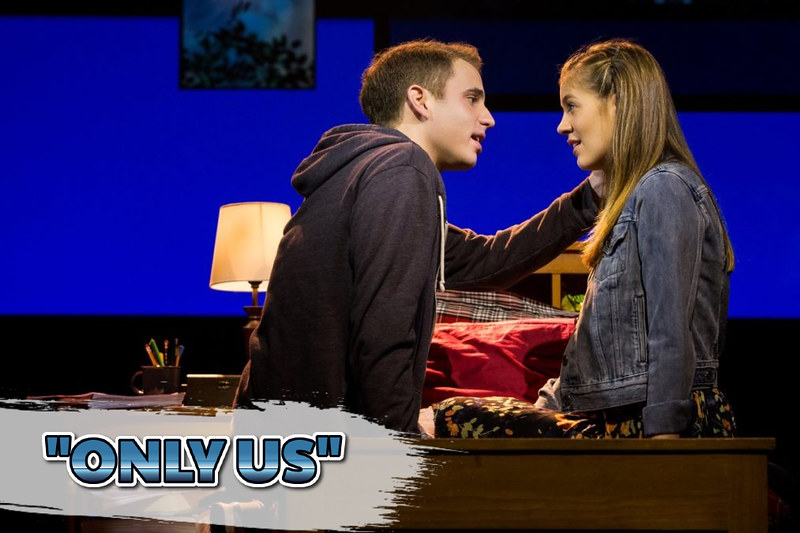 Only Us is a romantic song between Evan and Zoe. Unlike the first time they had a duet with “If I Could Tell Her“, this song shows how Evan managed to find the right confidence and how he finally managed to overcome his anxiety. Zoe convinces Evan that he no longer need of someone else validation and that he is good enough to what he is. It could have been more romantic but Evan is still embracing his own fabricated story about him and Connor and he knows that all of this intimate relationship with Zoe will fall apart once he tells the truth. Sad reality. 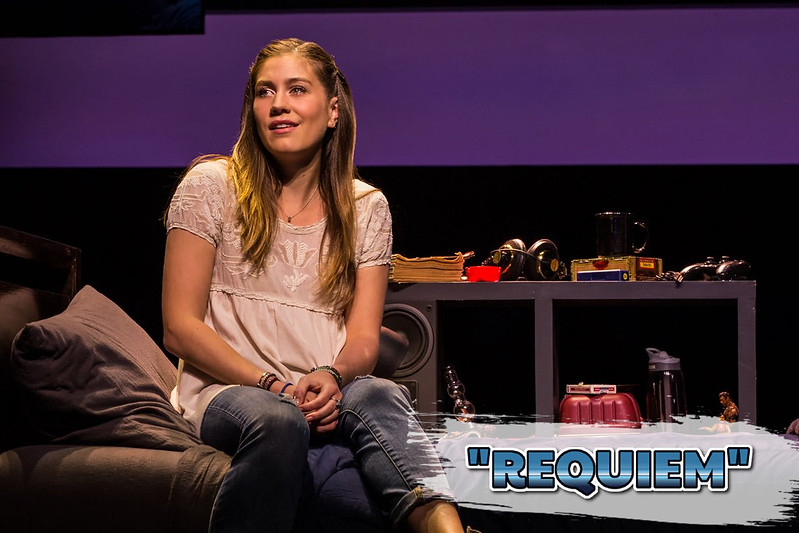 I personally think that Requiem is quite an underrated song from this catalog. This is actually a very powerful and very emotional song. Here, the Murphy’s are mourning about Connor’s death. It shows how each of them mourns differently. Larry tries to pretend that he was tough while Cynthia was nothing more but heartbroken. The song, however, will emphasize the broken relationship between Zoe and Connor. It shows how Zoe never really felt the brotherly love from Connor and unlike how Evan depicted Connor in his fabricated emails as a loving and caring son and friend, Zoe sees his brother differently. The part when she says ” That you were not the monster that I knew” will really hit you hard. 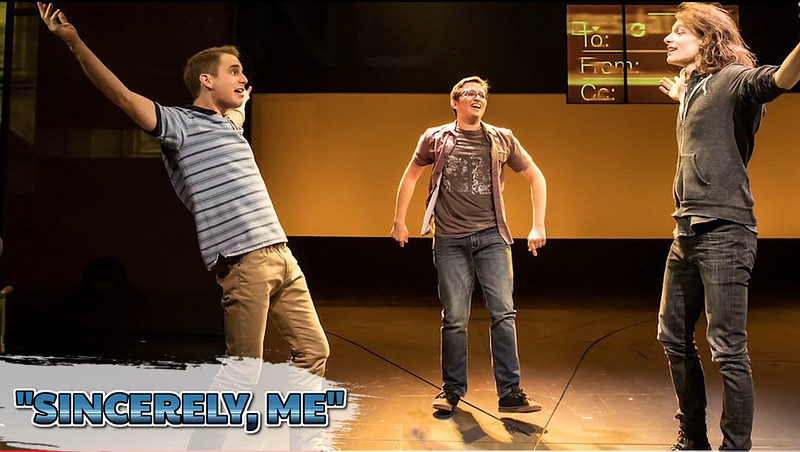 While most of the songs from Dear Evan Hansen are purely emotional, “Sincerely, Me” will surely give you some good laughs. This is the part where Evan Hansen and Jared starting to fabricate emails to convince the Murphy’s that Evan was actually a close friend of Connor. You know, every musical has their own dance numbers and i think this is the closest thing we can get from Dear Evan Hansen. It’s very catchy and absolutely hilarious. Jared’s silliness and Evan’s awkwardness surprisingly made this song super effective. 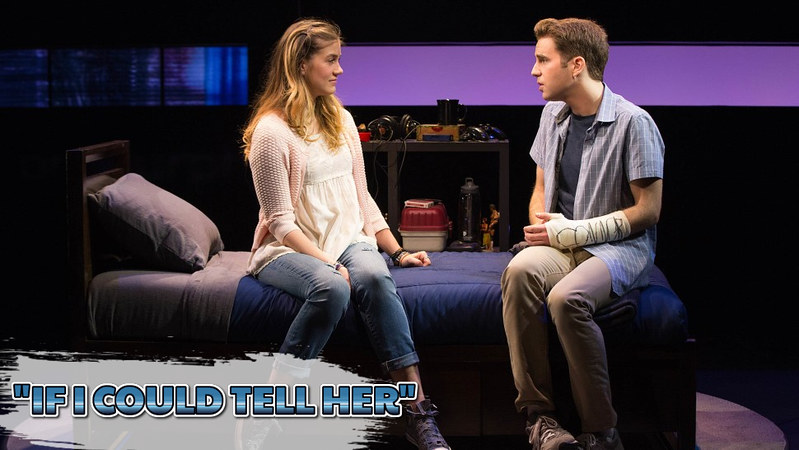 The real reason why Evan decided to embrace all these fabricated stories about him and Connor is because he had a feelings for Zoe. Unfortunately, Evan never had a chance to tell it to her prior to Connor’s death. In “If I Could Tell Her“, Evan tries to comfort Zoe and made her feel that her brother really cares for her. However, in reality, it was him who want to tell all those wonderful things about Zoe. Let’s just say, this is the start of their love story and Evan finally managed to connect with her. Vocal-wise, this is really a powerful song. 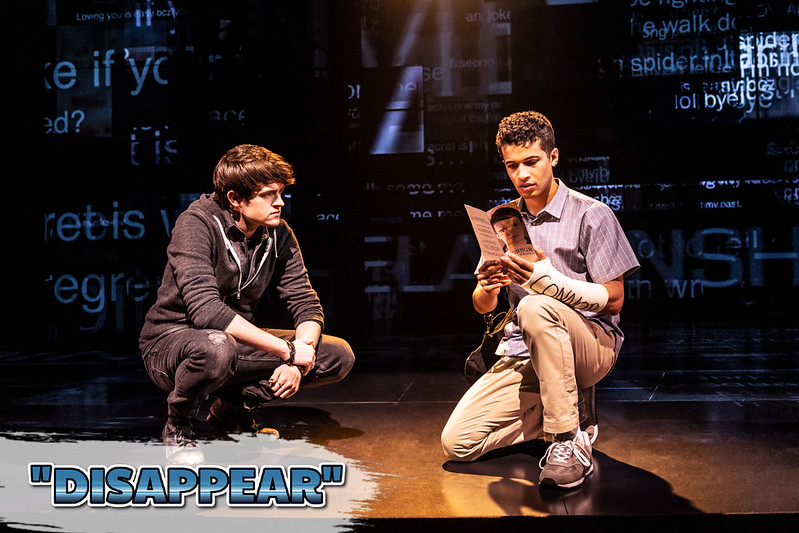 One thing i love about Disappear is the powerful message it tries to convey. The song comes in multiple scenarios. The first one is where Evan is already thinking of stepping out from the lies he made. However, the spirit of Connor (most likely Evan’s conscience) convinced him that if he stop pretending, he will go back to where he was and the Murphy’s will no longer care for him. This made him decide to start the so-called Connor Project to keep Connor’s memory alive. They will raise funds to bring the old Orchard alive in memory of Connor. 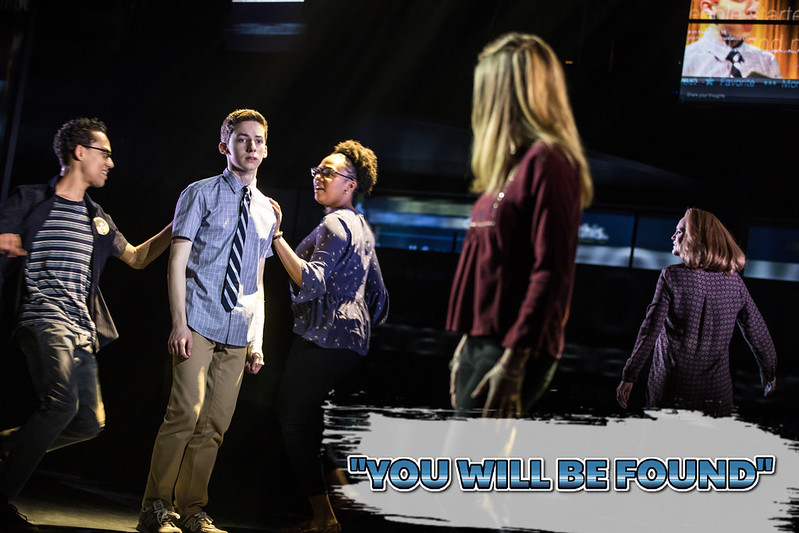 5. You Will be Found

You Will be Found is one of the flagship songs of Dear Evan Hansen. For some reason, the tune somehow reminds me of Flashlight from Pitch Perfect movie. This is a very powerful song with a very powerful message. This is the part where Evan finally managed to break through his comfort zone. He managed to deliver a powerful speech which eventually became viral and instantly elevates his social currency. The song tells everyone that even you are in your darkest and lowest point in life, there is someone out there who will be willing  to lift you up. 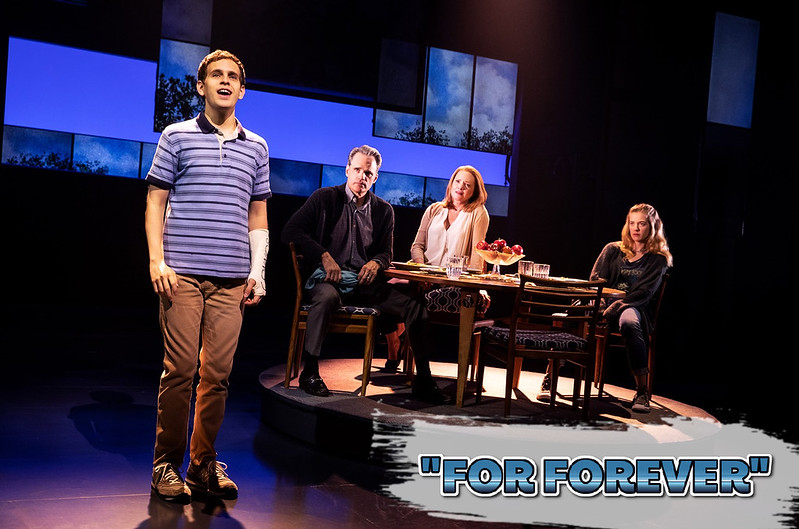 For Forever is one of my personal favorites from this musical. This is where Evan started to fabricate stories about him and Connor. He was caught off-guard and never managed to explain the real truth behind the supposed “Suicide letter” of Connor. It didn’t have much impact to me at first but after watching the musical, you will realized how incredibly sad this song was. It’s about Evan imagining the life he never had, about him conquering his solitude by imagining that he had a great company with Connor. The reprise is even more heartbreaking and put me in so much tears. It provides revelation about Evan which i prefer not to spoil. 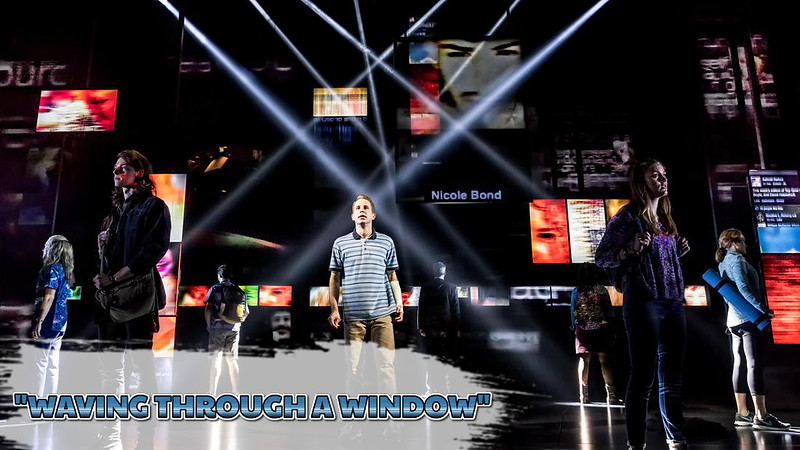 3. Waving Through A Window

Waving Through A Window is one of the flagship songs of Dear Evan Hansen. The song generally encapsulates everything about Evan’s social anxiety disorder. It shows how Evan struggles to connect with other people, how he finds it hard to escape his comfort zone, and how he struggle to fit in. It features a lot of deep metaphors that you will surely understand as you watch the show. I also think that Windows is a metaphor for social media platforms and waving symbolizes social interactions (you can even see social media snapshots in the background while the song is being performed). Also, I can tell you that “trees” have been mentioned many times in different songs and there’s a great reason to it. 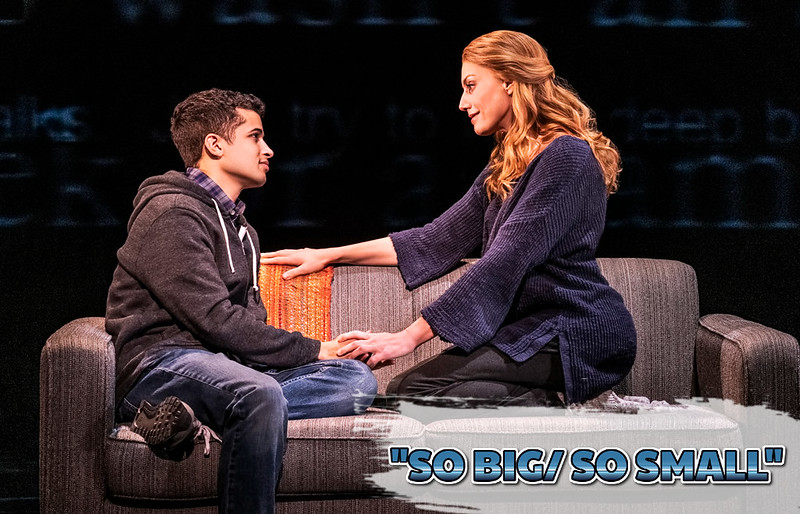 So Big/ So Small is a perfect way to conclude this musical (there’s actually a Finale song but I always this song provides more depth). After all the revelations of Evan, this song features Heidi trying her best to comfort her son. It’s a very emotional song that highlights Heidi’s story and the day her husband left her and Evan. Overall, it’s about acceptance and embracing the reality that life can be tough some times but everything will be okay eventually. The moment Evan hugged her mom is the emotional breakpoint of the song. I’m pretty sure Julianne Moore will give justice to this role. I just hope the song will make it to the movie 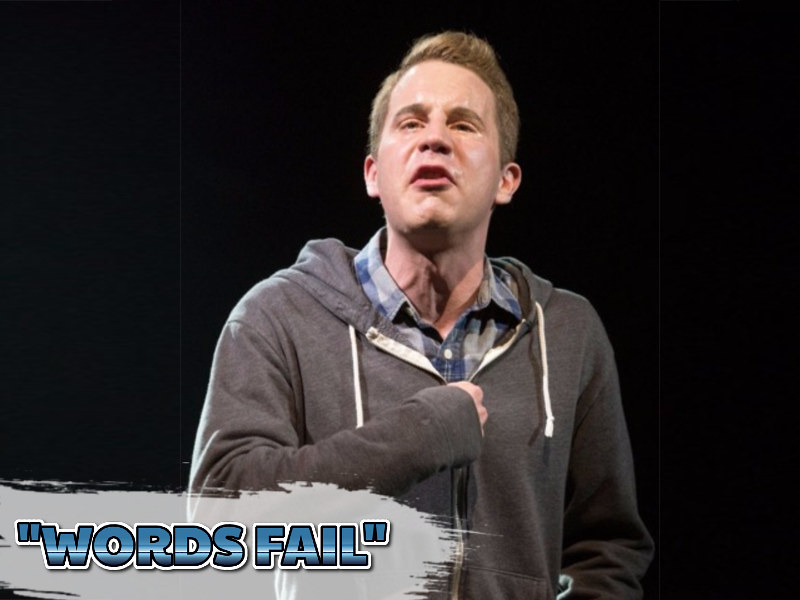 Words Fail is the most climatic song of this musical. This is the part where everything is starting to fall apart as a consequence of Evan’s fake story. Despite enjoying his new-found life with the Murphy’s, Evan had to end all his lies and tell the truth. The song is bursting with emotion and will surely break your heart especially when you put yourself in Evan’s part. Here, you can feel how much he is longing for such kind of life (longing for love, attention, and care). It’s also a conclusion to his song “Waving Through A Window” and this time, instead of stepping out of the sun, Evan decided to conquer his fear and face it.

How about you, what’s your favorite Dear Evan Hansen song?

The film is scheduled to have its world premiere at the 2021 Toronto International Film Festival on September 9, 2021 as its Opening Night Gala Presentation to be followed by a release in theaters on September 24, 2021, by Universal Pictures.

Tears For Fears Live in Manila