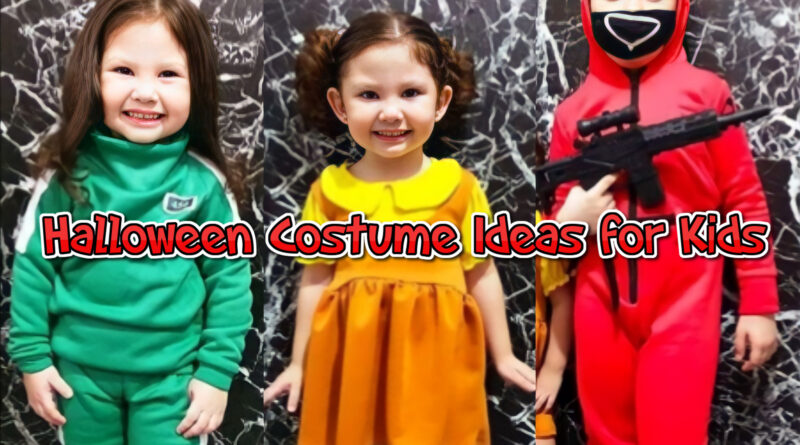 Halloween is nearly approaching! While it may not be as festive as the previous years due to the current global pandemic, Halloween is still worth celebrating. Parties and parades may not be allowed yet in most areas but that doesn’t mean kids can’t dress up and wear their favorite costumes. My niece, for instance, loves Halloween the most as she enjoys dressing up. She just turned 3 this month but she has been to many Halloween parties already. Unfortunately, there are no Halloween parties for her to attend this year but we decided to dress her up anyway.

If you are looking for some trendy Halloween ideas for this year, I have curated some costume ideas that your kids (and even adults) might enjoy wearing. Most of these are pop-culture references that created a huge buzz this year while others are staple Halloween costumes that are still effective for kids. Without further ado, here are some Halloween Costume Ideas for Kids 2021. 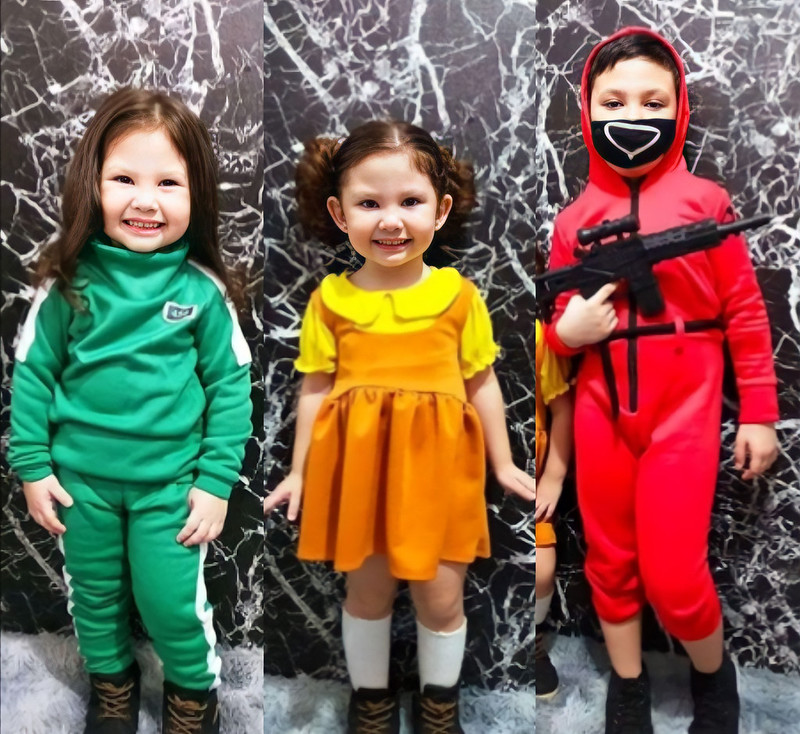 While the concept of this film is not really suitable for kids, seeing them wearing some iconic Squid Game costumes is still fun and clever. There is a couple of great costume ideas from this show. Girls can wear the costume worn by the Giant killer doll. You can DIY it by simply matching a yellow top (preferably with Peter pan Collar) with an orange jumper dress. Pair it with long white socks, black Mary Jane shoes, and of course the Pigtails and you are good to go. Kids may also play as Squid Game worker or player by wearing pink or green jumpsuits respectively. You can also customize a facemask and add the Squid Game symbols too. To make this costume more effective, you can make some Dalgona Candy as props. You can also purchase costumes online. The photos above are from Shopee. You can check the store here (Disclaimer: not sponsored) 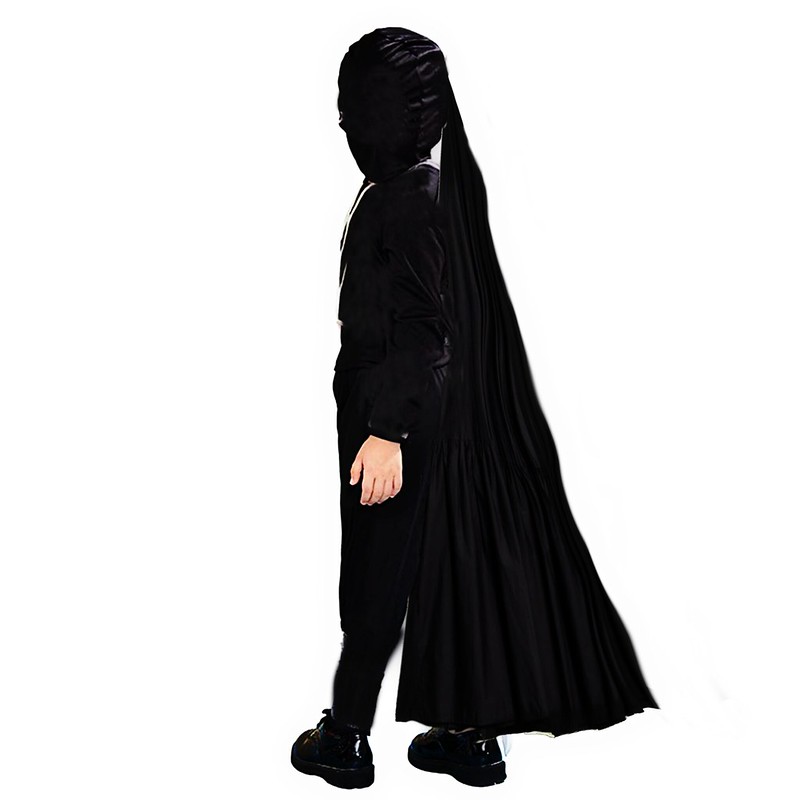 Kim Kardashian’s showstopper costume in the recently concluded MET Gala is definitely an instant Halloween Costume idea. The costume is surprisingly easy to recreate. If you have an old black Ninja costumes from last Halloween seasons, then you might want to turn them into Kim Kardashian-inspired dress. You can also use a long-sleeved dress (long and flexible enough to turn it into a skirt). Pair it with a long black stockings, black satin gloves, and a full face mask (a stocking might work too). Complement it with an improvised black cape and match it with a black shoe. 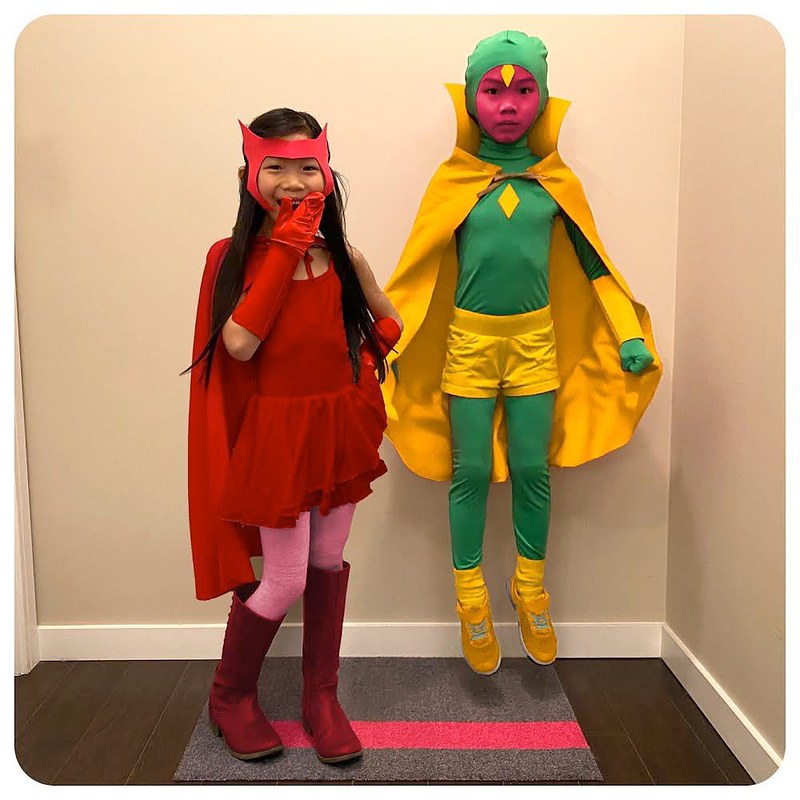 WandaVision was such a huge hit series in Disney + and it will not be surprising that many kids who watched the show would love to turn themselves as the Scarlet Witch and Vision. Your kids can either sport the comic-inspired costume of the aforementioned superheroes as these are more accessible in most online shops today. If you have budget, you can look for the MCU costume of Wanda and Vision too. I recently came across this IG page”@MyDadMadeMeDressUp“, a dad who make amazing costumes for his kids and I instantly became a fan. Above is a picture of his kids wearing Wanda and Vision inspired costume. 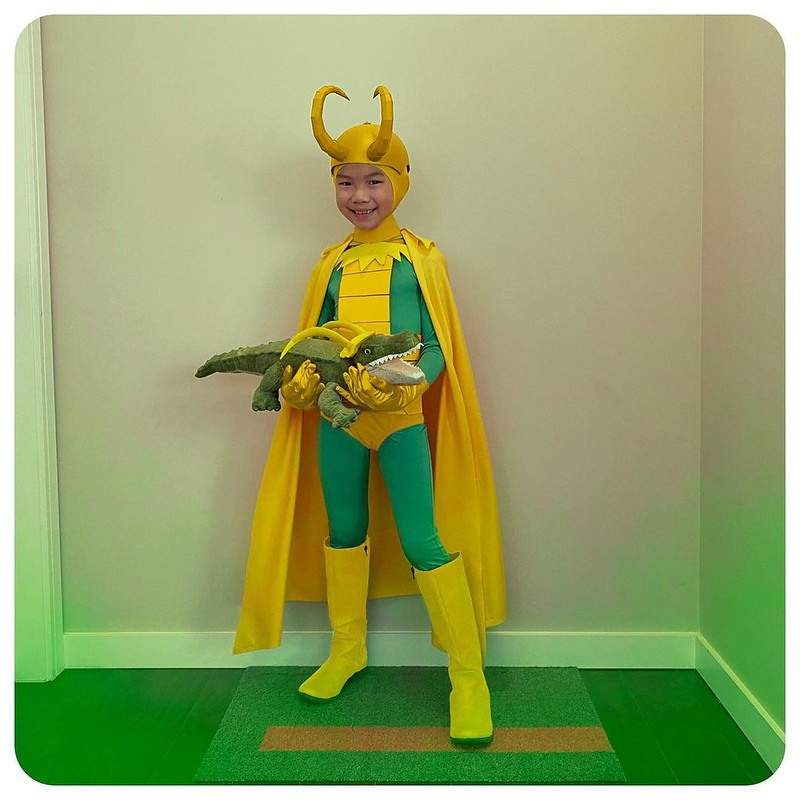 Loki is another successful series from Disney + and there are also many amazing costume ideas from this show. Boys can wear either the TVA-inspired Loki Costume or better yet they can sport a Classic Loki costume. Girls, on the other hand, can play Sylvie. An alligator Loki stuffed toy like the one shown above is an excellent prop too. The photo above is also from @MyDadMadeMeDressUp 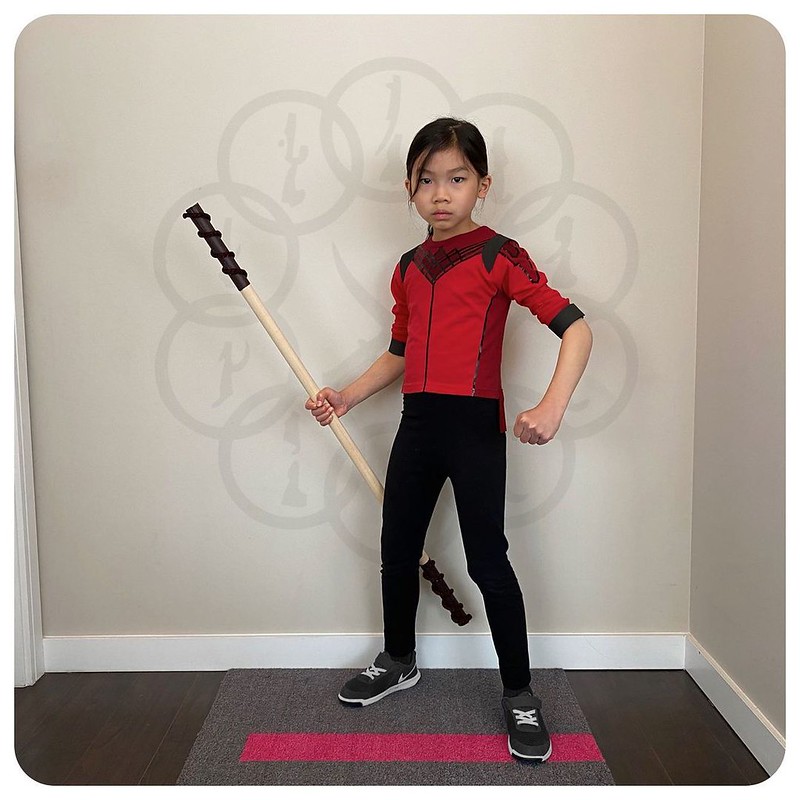 Another Marvel Superhero that made a huge buzz this year is Shang-Chi. Just like the image above, you can easily recreate this costume by wearing black pants and by decorating a red long-sleeved top. You can use markers or black tape for the design. If the kid dresses up as Shang-Chi, you can also improvise the ten rigs to be wrapped on both arms. If the kid dresses up as Katy (Awkwafina’s role), you can use bow and arrow as props too. 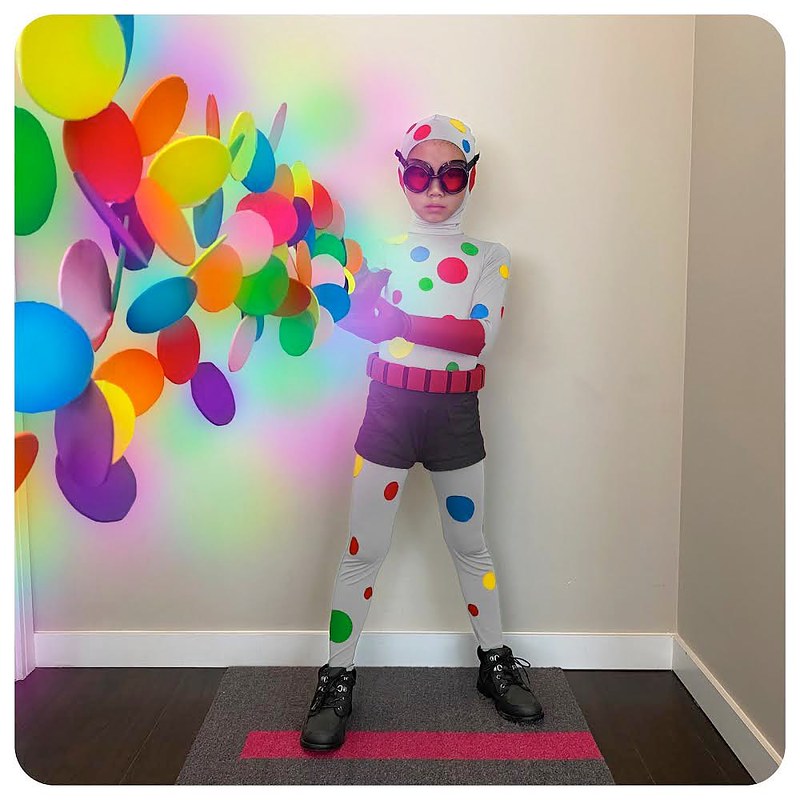 If Marvel has Shang-Chi, DC offered us the Suicide Squad this year. Harley Quinn costume has become a staple in Halloween and there are many Halloween costume to choose from. There are also many Suicide Squad characters that are notably easy to recreate. One of which is the Polka Dot Man. You can recreate this with a onesie dress, goggles, belts, and red gloves. Decorate the gray onesie with colorful polka dots of varying sizes and you are good to go. You can also grab Suicide Squad inspired costumes online. 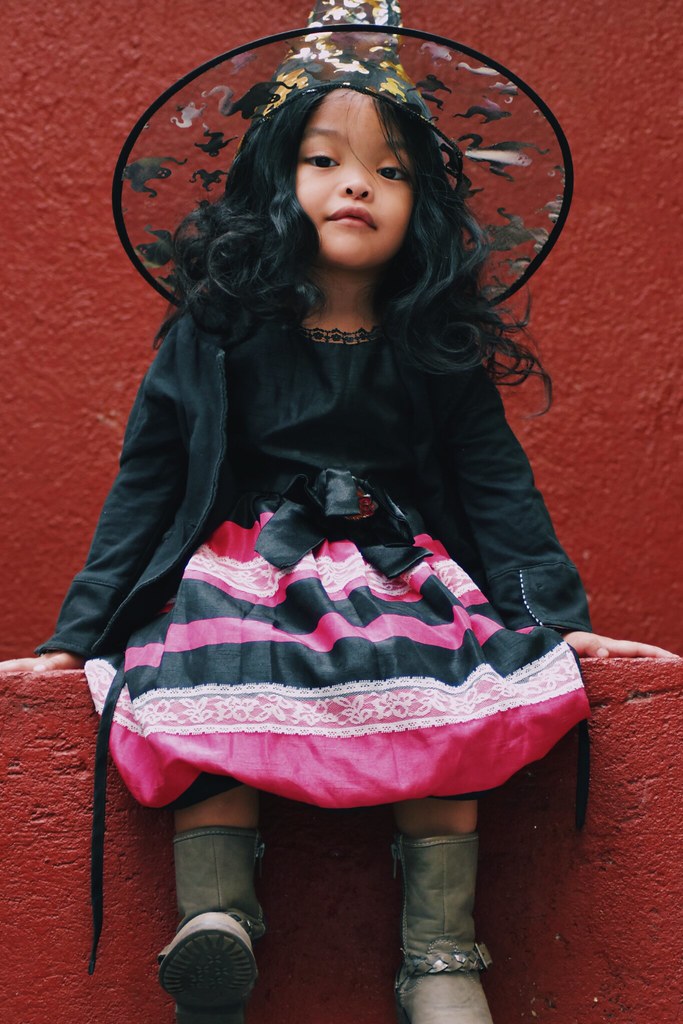 Witch costume is another Halloween staple and is very easy to execute for kids. All you need is a witch hat, black dress, and a pair of boots. To make it more convincing, you can add some props like witch broomstick, a black cat stuffed toy, or even a fake witch nose. The photo above is my 3 year old niece sporting our DIY witch costume. We just recycled her old black dress and paired it with a black blazer. 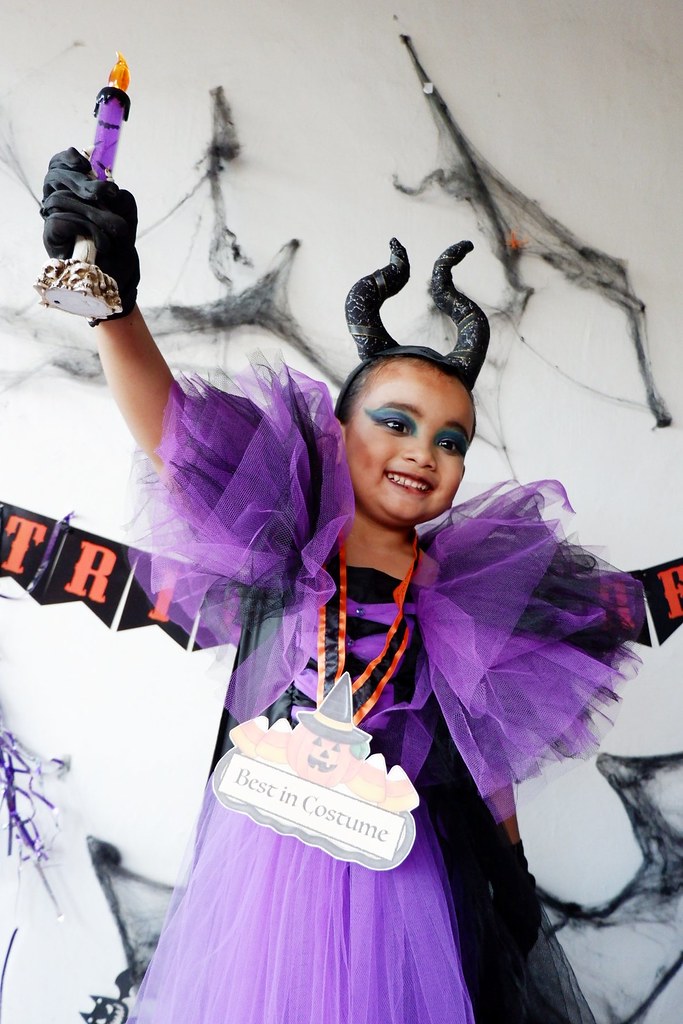 Speaking of witch, i mean which! Maleficent is such a huge hit for many girls. She’s probably the most likeable witch ever. Thanks to Angelina Jolie’s portrayal. There are some inexpensive Maleficent costumes available in the market. The photo above is also one of my nieces. My aunt made this costume for her and as you can see, my adorable niece won the best costume that year. The photo was taken in 2019 (prior to pandemic). 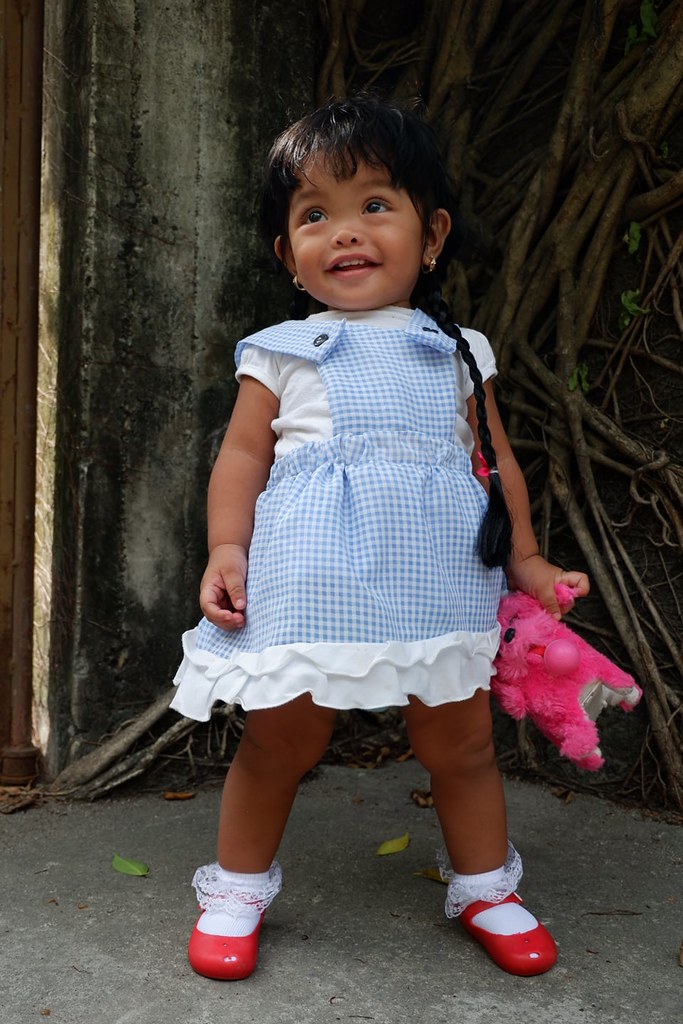 This is my nieces DIY Halloween costume in 2019. My younger brother managed to transform a pillow case into a nice Dorothy costume from the Wizard of Oz. Of course, this costume will not be completed without Dorothy’s iconic pigtails and a pair of red flat shoes. We also matched it with a dog stuffed toy as Toto. 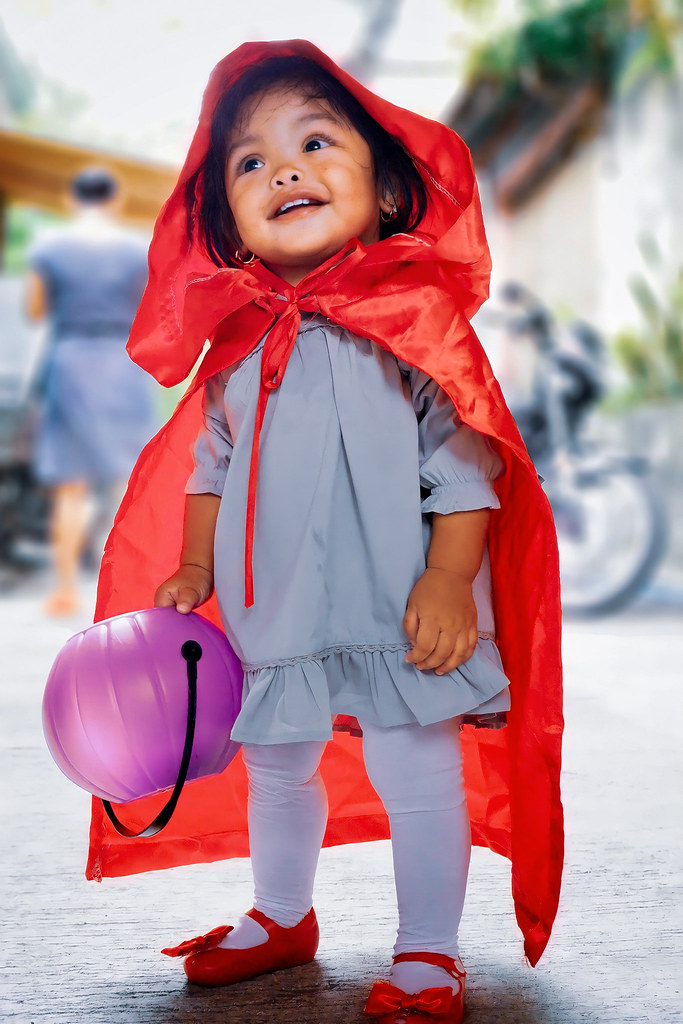 For little girls, you can never go wrong with fairytale-inspired costumes. Whether it’s their favorite Disney princess or other classic fairytale characters like Red Riding hood, they will surely enjoy wearing it. The photo above shows my adorable niece wearing a Red Riding Hood inspired costume. It is also a DIY costume taken from my old InuYasha outfit from the 2017 Cosplay Mania. We just paired it with plain dress, white stockings and red shoes. 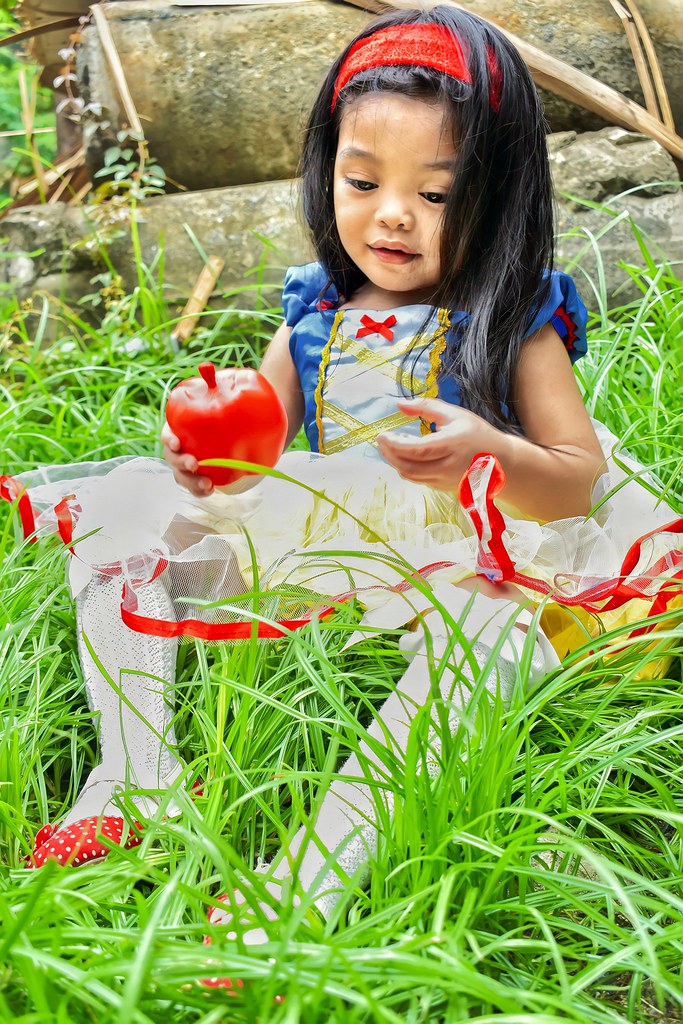 This is my niece again wearing the costume of her most favorite Disney Princess Snowhite on her 3rd birthday. Interestingly, Disney Princess costumes are not really hard to find online. You can spot many of these adorable yet inexpensive costumes from one online shop to another. 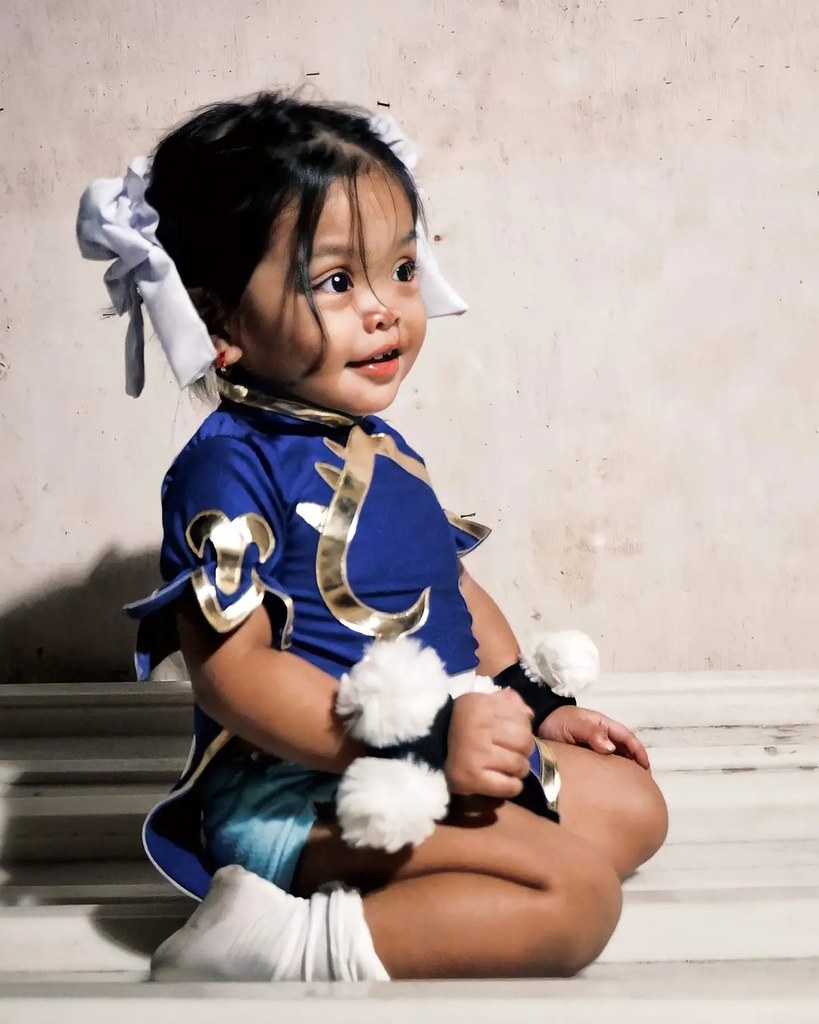 We also found this cute Chun-Li costume online and it’s just so nice to see her wearing a costume of a video game character that she is definitely not yet aware of lols. It’s just so adorable and it fits her perfectly! There are many video game characters to choose from. There are the classic Mario Brothers, Princess Peach, Legend of Zelda characters, Pokemon, Minecraft, and more. 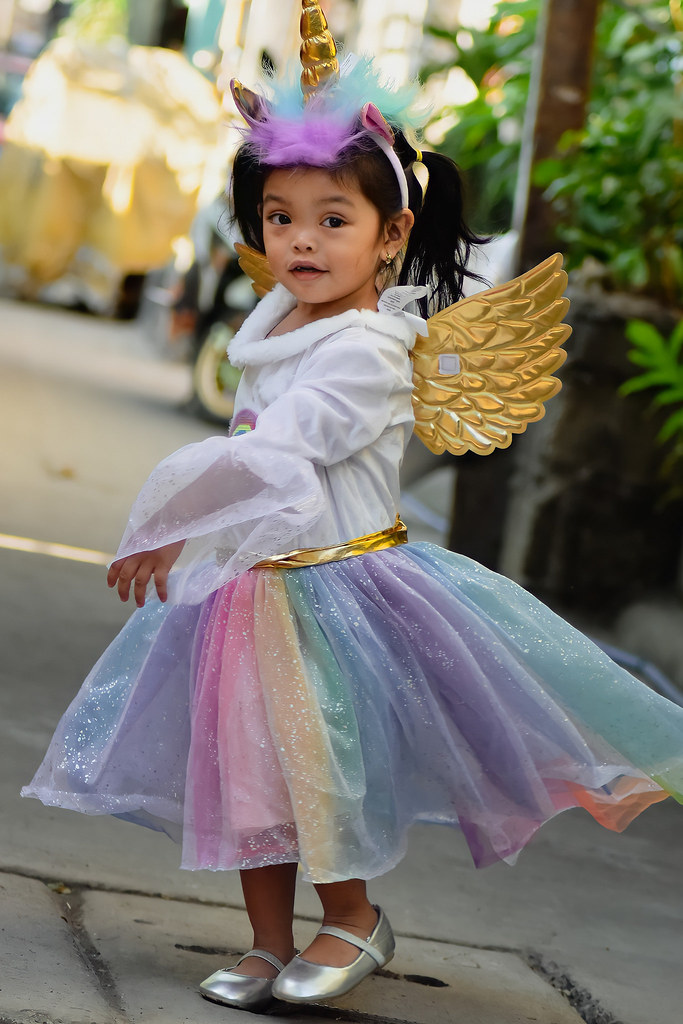 My niece enjoys watching the My Little Pony series and you can see how happy she was when she got this unicorn-inspired costume. It comes with horn, rainbow fur, and gold wings! Absolutely gorgeous! 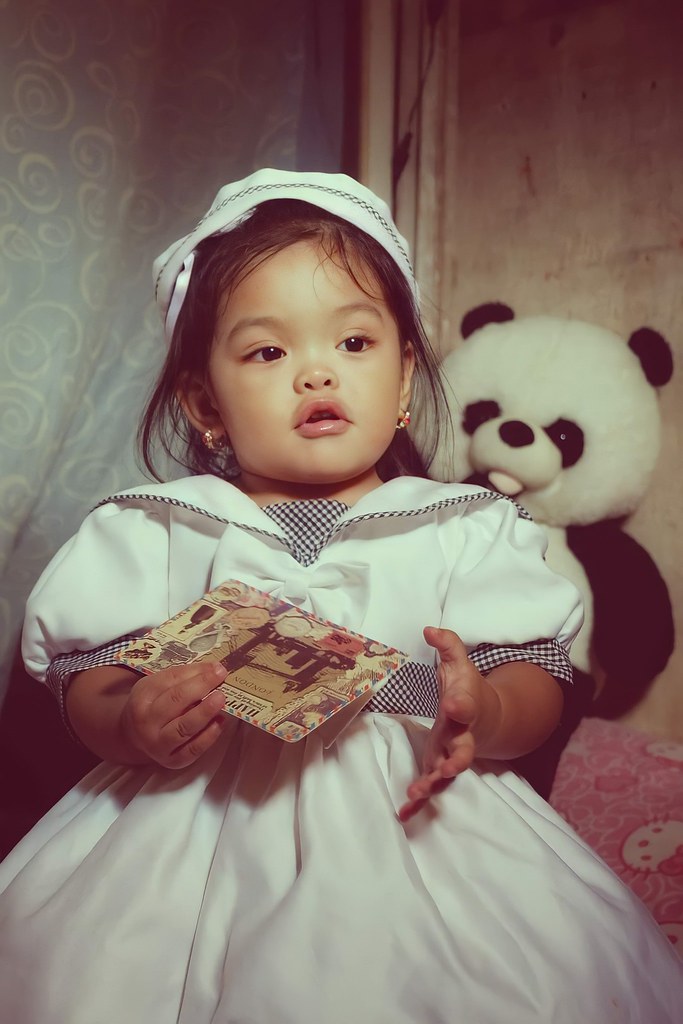 Here comes another unique Halloween costume idea! You can go Vintage! To execute a nice vintage-inspired look, search for  a nice Sailor dress. There are some sailor dresses that are being sold online. Here, we matched it with some old postcards too as props.

Embarking Yourself on a New Career