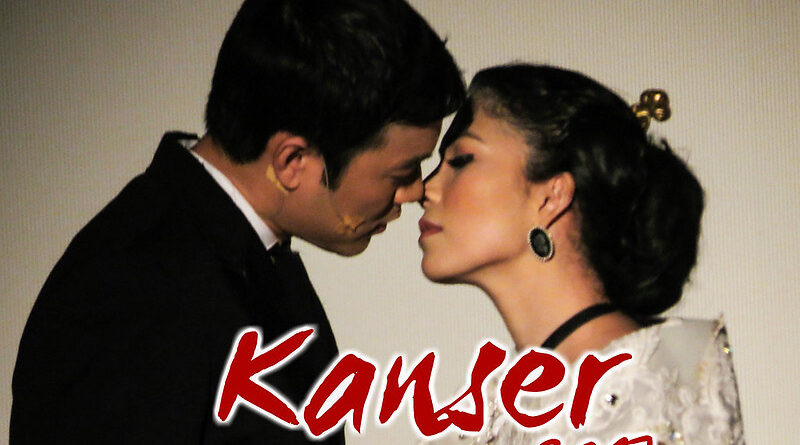 Over a hundred years ago, Jose Rizal wrote a novel that features more than just a tale of two lovers and their tragic fate but more of a story that reflects the reality. A story that inflamed the hearts of the Filipino and ignited their sense of nationalism. This, eventually lead to a revolution which became the key towards our freedom.

Hundreds of years have passed and yet, the story is still surprisingly relevant today. We are still suffering from what Rizal would described as “social cancer“.  It’s true that we are now an independent country and we managed to free ourselves from the foreign invasion yet how come this seemingly incurable cancer is still present in our society? Unlike before, this social cancer is no longer just about colonization but it is now manifested in different forms. People are still seeking for justice, some are seeking for equality and our farmers are still suffering from poverty due to endless corruption. It’s very sad to see that freedom is seemingly too much to ask for us, Filipinos.

Dr Jose Rizal was right all along. He said that “To foretell the destiny of a nation, it is necessary to open the book that tells of her past“. Thank God his novels will constantly remind us of our country’s crucial past. Unfortunately, with our generation today, people are more engaged with other things. They are now highly influenced by different culture and they are more focused on whatever they can find online. For them, whatever goes viral is seemingly worth a share.

Younger generation only get the chance to revisit both Noli Me Tangere and El Filibusterismo during their high school because both novels have become part of curriculum and it’s pretty much obligatory to study them. 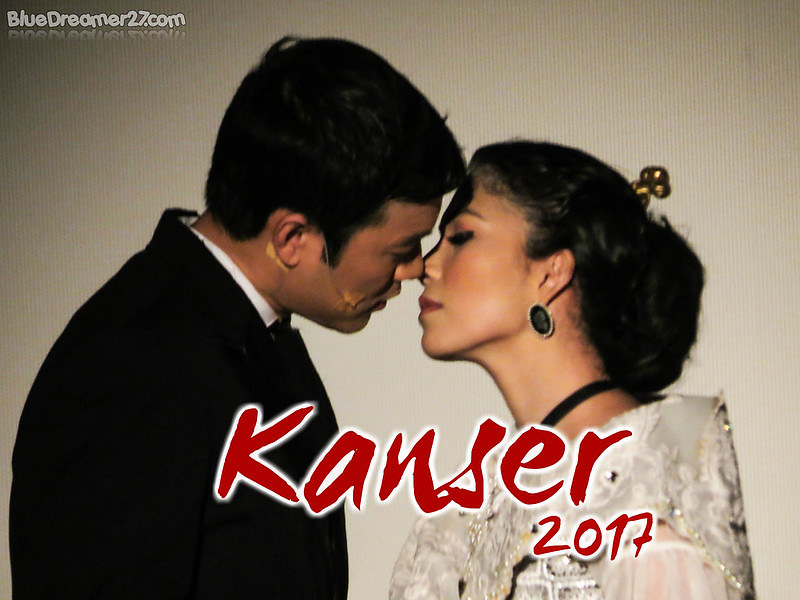 We are very lucky that we still have other forms of media to remind us all about the important message of Rizal’s novels. Gantimpala Theater Foundation, for instance, has remained faithful to their goal to bring this popular and classic novels on stage. Through their visualized interpretations, they managed to effectively deliver the message that these novels try to imply.  Kanser, hailed to be one of the longest running stage plays in the country, never failed to deliver the right passion and dedication to its audience. 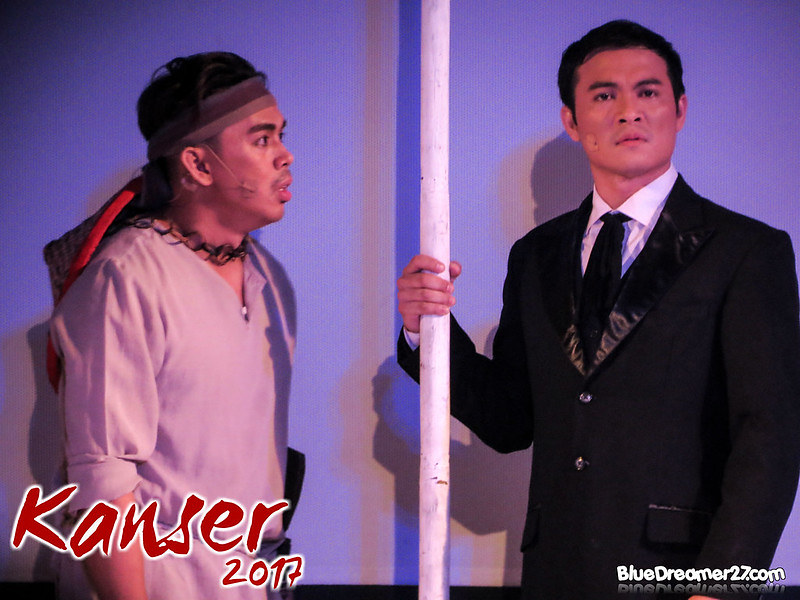 Crisostomo Ibarra and Elias in Kanser 2017
The show has come a long way. Kanser has gone through numerous revisions in staging. From its shows at the Bulwagang Gantimpala, an intimate theater presentation to the proscenium production of the CCP Main Theater and the Met Theater plus all the other venues in the country, a change of hands in the person of actors and production people, Kanser gave the numerous talented people the opportunity to be a part of a classic play. Seasoned directors have also given their share of interpreting the play – Tony Espejo, Jake de Asis, Roobak Valle, Adriana Agcaoili, Mia Gutierrez, Frannie Zamora and Jun Flavier Pablo. 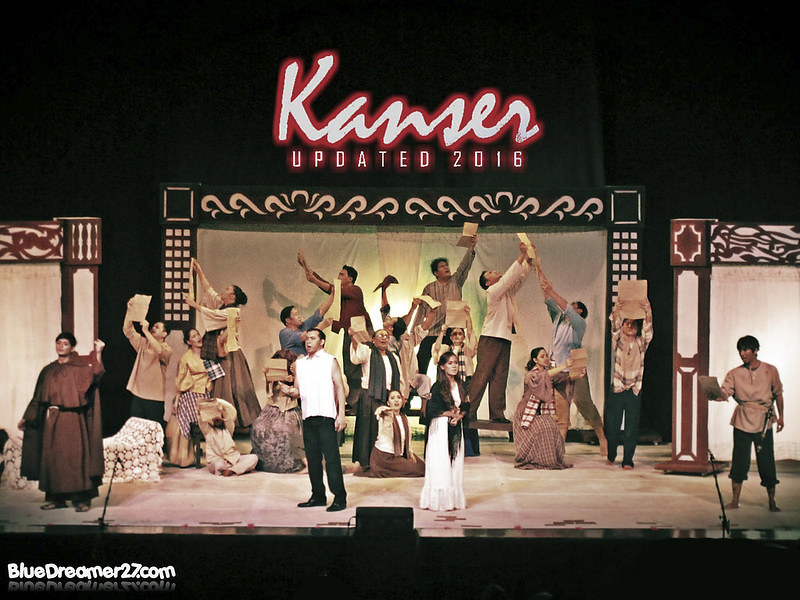 The Cast of Kanser Updated 2016
The present production is now a tighter version of original Kanser, The Musical (produced last 2015) that was presented during its 35the year anniversary. Director Frannie Zamora has skillfully infused about 10 songs from the musical into the straight play – a welcome revision that has delighted the viewers. But what charm does the production of Kanser have that captivated hundreds of thousands of students and theater aficionados through the years? Maybe it is the story. A love story woven by Rizal with a dash of patriotism, idealism, deceit and uncanny revelations.

Could it be the staging of the play where actors are garbed in an almost authentic costumes that compliment the language and mannerisms of the period? Or maybe the relevance of the incidents that still mirrors the present times. All these and more is what Kanser has now been regarded as a classic production.

I was able to witness the show multiple times and Kanser never failed to impress me. I personally love how they incorporate modern approach to the show to make it more relatable to younger audiences. This year, Kanser will, once again, grace the stage for another meaningful run. It is, once again,  directed by the veteran and one of  the in-house directors of Gantimpala Theater Foundation Frannie Zamora. Packed with a refreshing cast of talented actors, the show guarantees you to give this classic novel the justice it truly deserves. 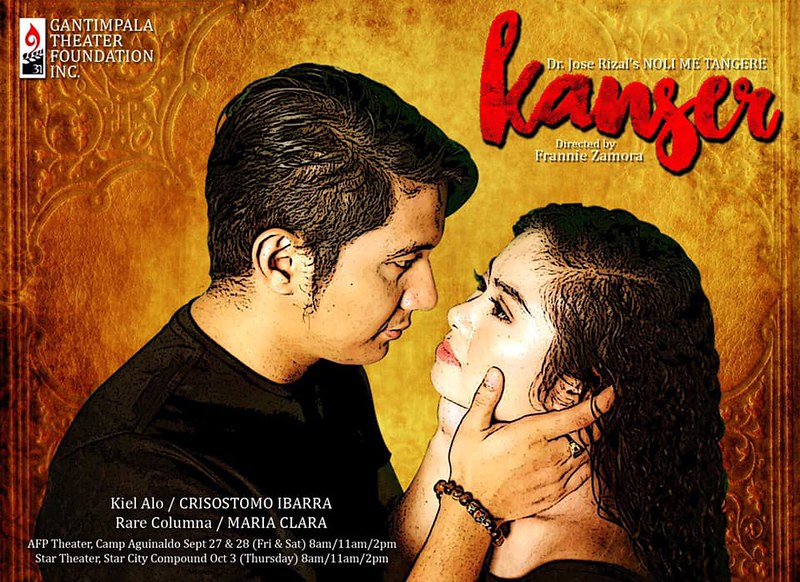 For those who are willing to catch Kanser 2019, here are the following playdates:

You can also read my previous Review for Kanser Musical
►[Theater Play Review] Kanser 2017 : The Novel By Gantimpala Theater Foundation
►Kanser Updated 2016, A Reflection Of Reality 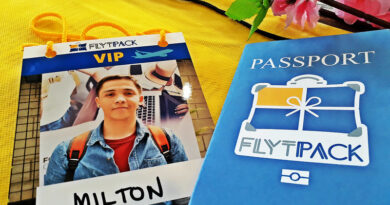 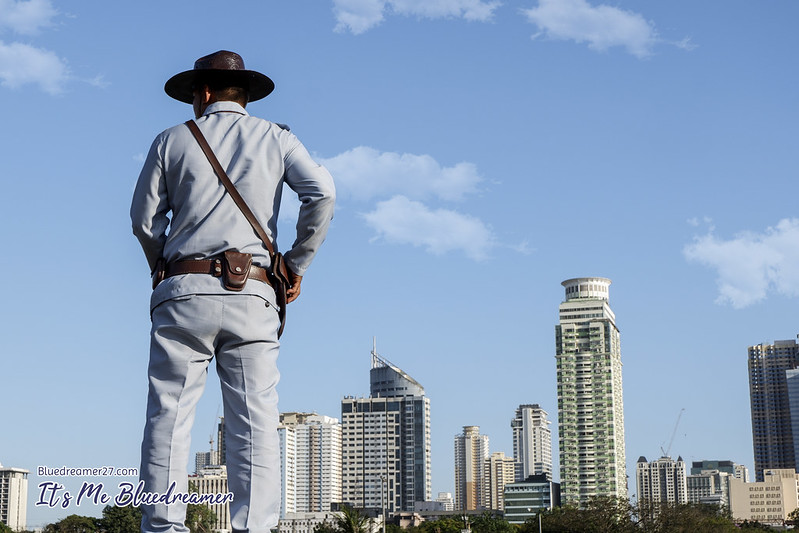