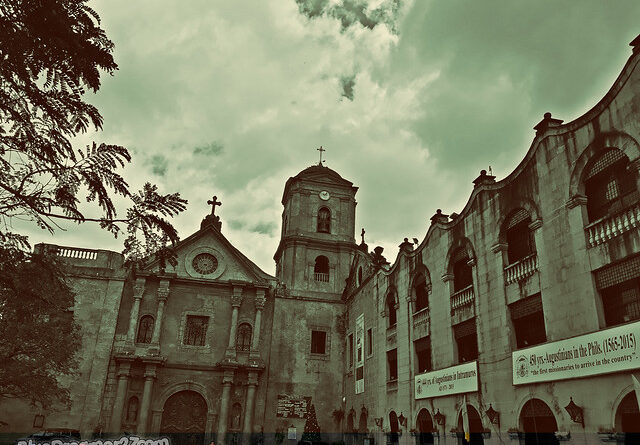 Here’s an entry to conclude my Intramuros tour. There’s still many other places to explore including those museums and other notable attractions nearby but I might have to save them all for Let’s Explore Manila Part 2. For the mean time, let us dig into the past and explore this interesting piece of rich Intramuros history.  Aside from the bastions and other defense structures in the so-called Old Manila, the walled city houses not just one but seven great churches. It was truly heartbreaking that the second world war left a huge scar in this 350 year old city of Intramuros and only one church remained standing after the nightmarish tragedy. 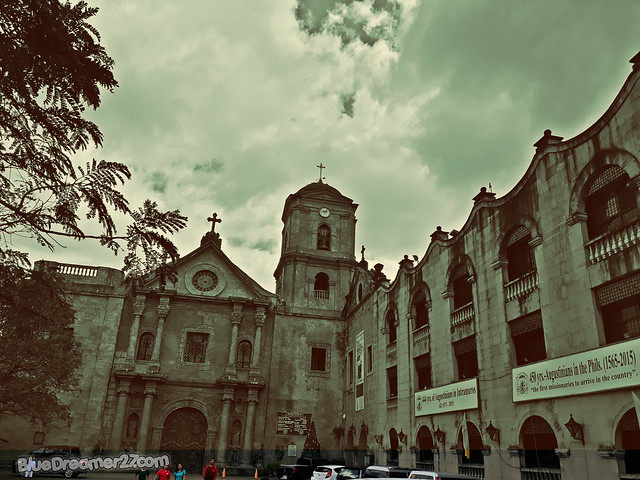 Intramuros, as the seat of religious and political power during the Spanish Colonial Period, was the home to seven grand church built by different religious orders. 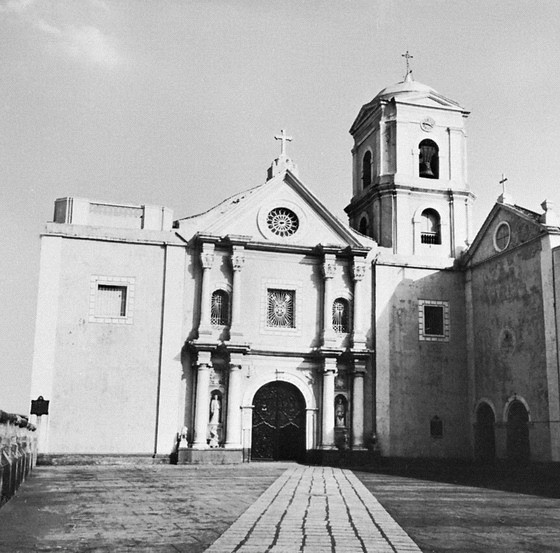 Of all the seven great churches of Intramuros, only the San Agustin Church managed to survive the war and is the only building within the walled city not to be destroyed during the second world war.  The church was built from 1587 and was completed in 1604 by the Augustinians and is now considered as the oldest building in Manila. The reason why the church managed to survive the bombings is because of the Red cross marker placed on its bell tower (it is a great war crime to destroy any buildings or vehicles with such emblem). 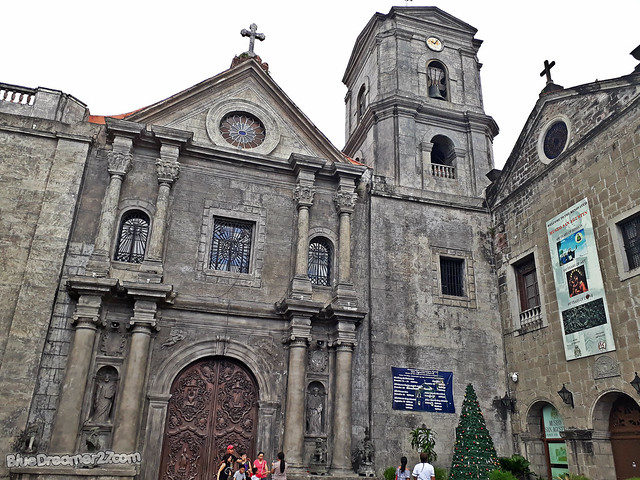 The current state of the church. The church was designated as World Heritage Site by UNESCO in 1993 and was named a National Historical Landmark by the Philippine government in 1976. In 2013, the church underwent renovation where the colorful facade was replaced  by a mature stone-colored one. 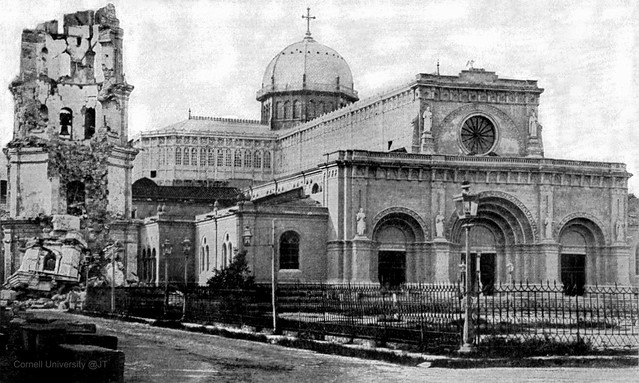 Photo Credit : John Tewell Flickr
The Minor Basilica and Metropolitan Cathedral of the Immaculate Conception or more popularly known as the Manila Cathedral is located in front of the Plaza Roma. It was originally a parish church owned and governed by the Archdiocese of Mexico in 1571, until it became a separate diocese on 6 February 1579. When the church was raised to a cathedral in 1579, a new structure made from nipa, wood, and bamboo was constructed in 1581 by Domingo de Salazar, the first bishop of Manila. The new structure was consecrated on December 21, 1581, formally becoming a cathedral. Prior to the Battle of Manila, the church was utterly damaged by earthquakes. 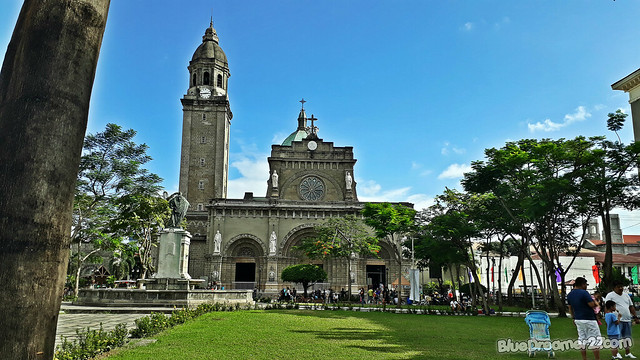 The present cathedral was constructed from 1954 to 1958 under Cardinal Rufino Jiao Santos and under the supervision of the notable Filipino architect Fernando H. Ocampo. The cathedral underwent repairs for earthquake retrofitting and subsidence prevention in 2012 where the Cathedral was closed to public for 2 years. It was reopened in April 2014 with modernized features with CCTVs and monitors. (Check : Revisiting Manila Cathedral) 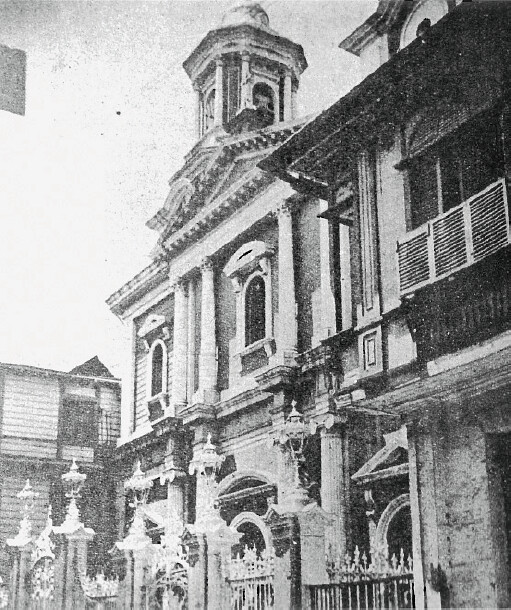 Photo Credit – Nostalgia Filipinas
San Ignacio Church was one of those utterly damaged buildings during the Battle of Manila. Much like the rest of the churches in this list (except Manila Cathedral and San Agustin), San Ignacio Church was converted and replaced by different establishments but the ruins are still visible. After it was destroyed in 1945, the property was acquired by the government and was rented out to different companies, which converted its ruins as an office space and a warehouse. Later on, the ruins of the church was turned into a basketball court. 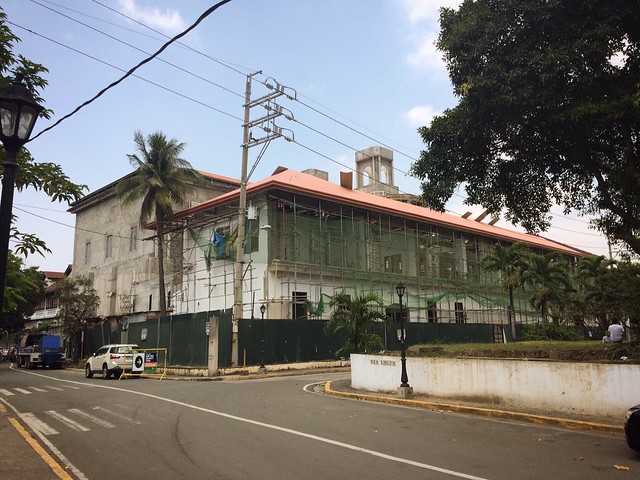 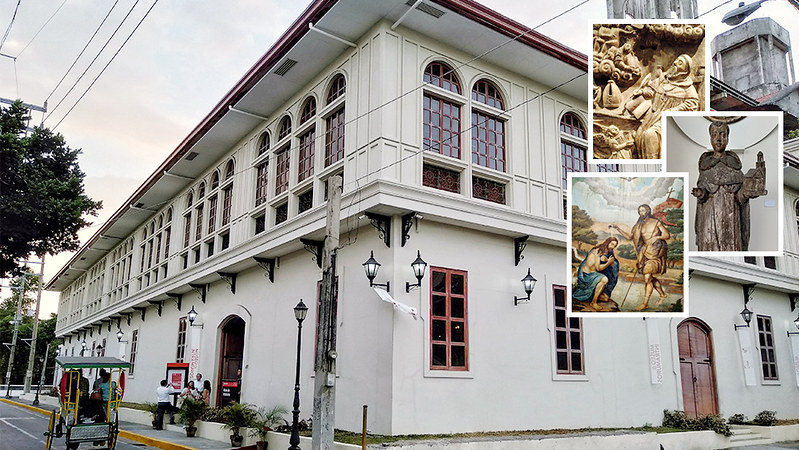 4. OUR LADY OF LOURDES CHURCH 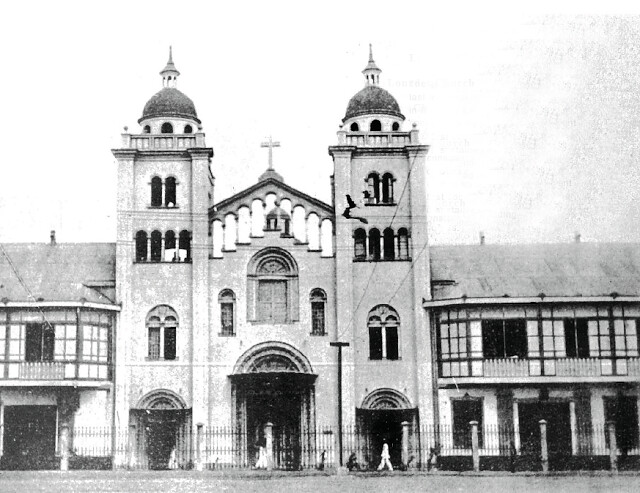 Photo Credit: Nostalgia Filipinas
Our Lady of Lourdes Church is administered by the Order of Friars of the Capuchins. Among all the prewar churches of Intramuros, Our Lady of Lourdes is the youngest. The church was completed in 1898 but prior to that, it started off as a small chapel but the devotion to the Marian image grew and they decided to expand the church. Much like the rest, Our Lady of Lourdes suffered the same fate with other churches. It is also interesting to note that two images of Our Lady of Lourdes dating from 1892 and 1894 respectively were hidden and spared during the bombing. Both are now enshrined in the church’s current location in Quezon City. 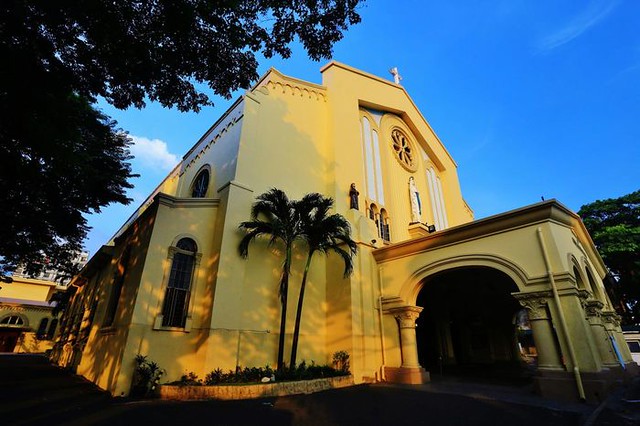 The current state of Our Lady of Lourdes (now a National Shrine). It is very interesting to note as well that the Capuchins obtained the official authorization from the government to restore the church of Lourdes in Intramuros but they decided to build a beautiful and wide church in Quezon City, Retiro St. 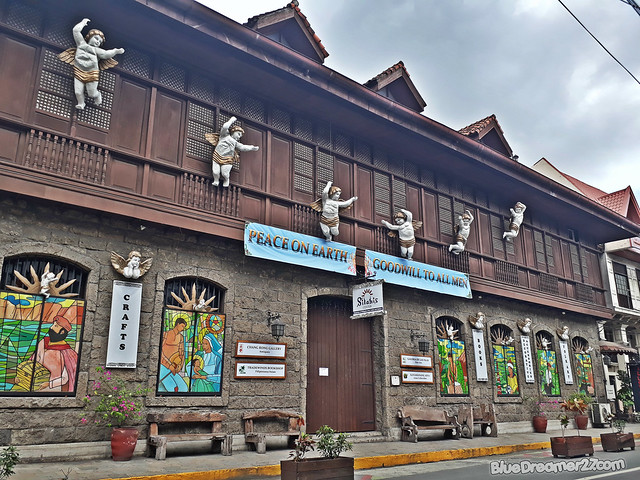 Today, the former site of Our Lady of Lourdes Church in Intramuros is now occupied by El Amanacer compound where Silahis Arts and Crafts and Ilustrado Restaurant can be found. 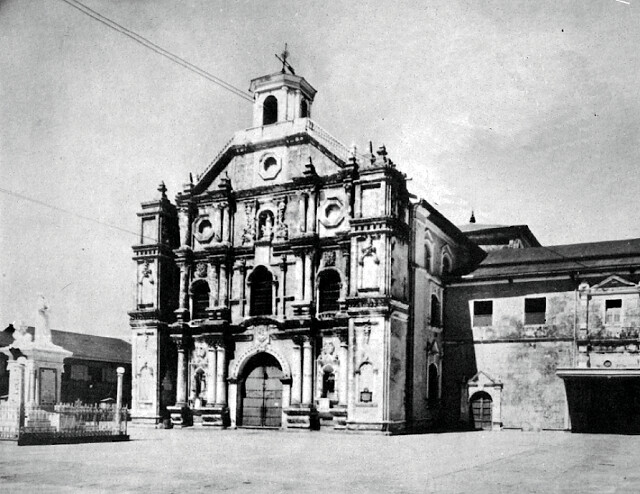 Of all the prewar churches of Intramuros, The San Francisco Church suffered the saddest fate. After the second world war, the church was not restored nor transferred to another site.  The first  church was built in 1578 and it underwent a series of reconstruction after being burned in 1583 and destroyed by earthquake in 1645. The third church was built in 1738 and like many others, it suffered greatly during the Second World War. The church notably had a retablo-like facade. The church was the home for the devotion to St. Anthony of Padua, patron saint of the poor. There was a statue of St. Anthony in front of the church facing the plaza. The statue was now located in Santuario De San Antonio in Forbes Park. 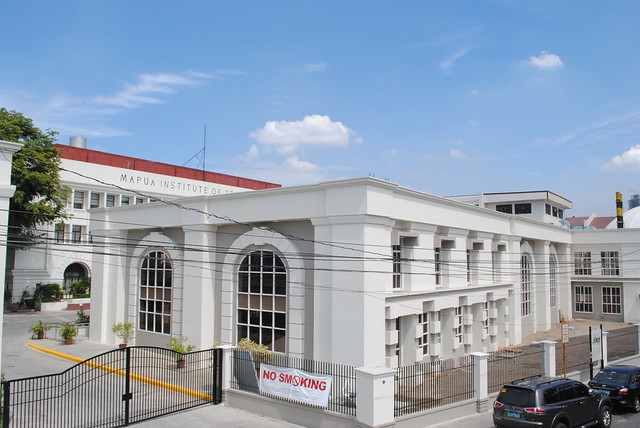 The former site of San Francisco Church has been occupied by Mapua Institute of Technology since the second world war. 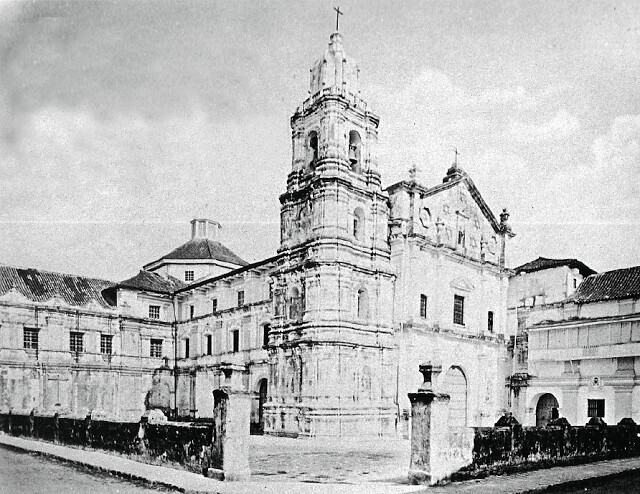 San Nicolas De Tolentino Church or simply known as the Recollect church was administered by Augustinian Recollect Order. The first church was built in 1619 but underwent numerous restoration and reconstruction through out its history. The last one was built in 1782. The church is known for its four storey belfry and is also known as the place where Father Diego Cera started making Bamboo Organ. Cera is also the man behind the famous Bamboo Organ in Las Piñas (Check : The Famous Bamboo Organ Church of Las Piñas). It formerly housed the Nuestro Padre Jesús Nazareno or more commonly known as the Black Nazarene of Quiapo too. The Recollects moved out of the walled city after the war and found their home in San Sebastian Church (Check: The San Sebastian Church). 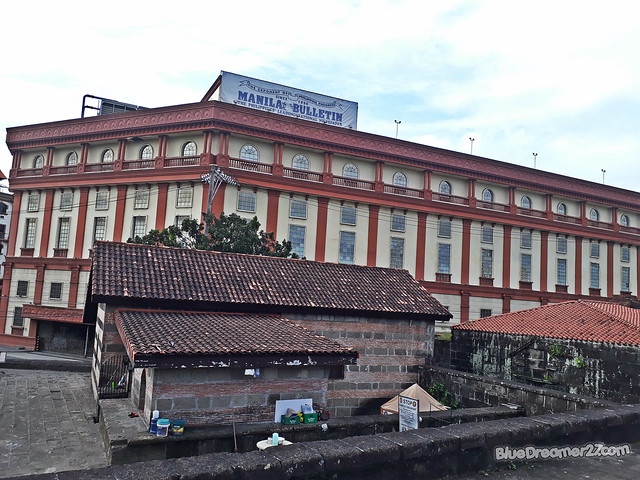 Today, the former site of the Recollect Church is now occupied by Manila Bulletin Building (second-oldest Philippine newspaper next to The Manila Times). 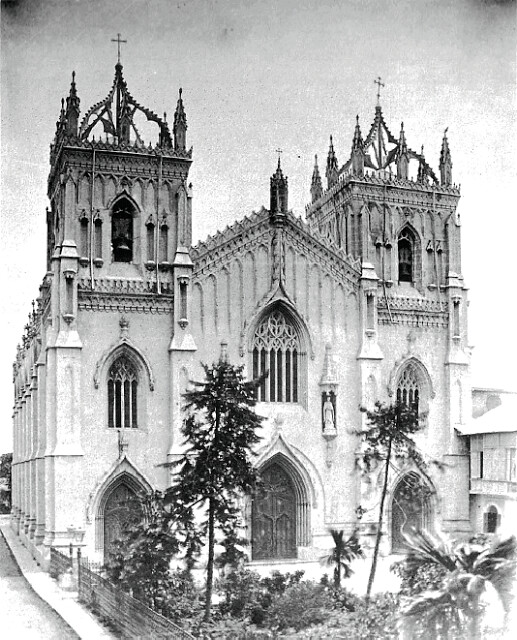 The Santo Domingo Church underwent numerous reconstruction (has been rebuilt five times in particular on the same site in Intramuros). The First church was built in 1587 and the fifth one was built in 1887 until it was completely destroyed during the Battle of Manila. The church enshrines the  ivory image of Our Lady of the Most Holy Rosary (Nuestra Señora del Santisimo Rosario) also known as the Virgin of La Naval.  The church was the first structure in Intramuros that was destroyed by Japanese bombs in 1941 but the image of Our Lady of La Naval De Manila was spared as it was kept in one of the church’s vaults. 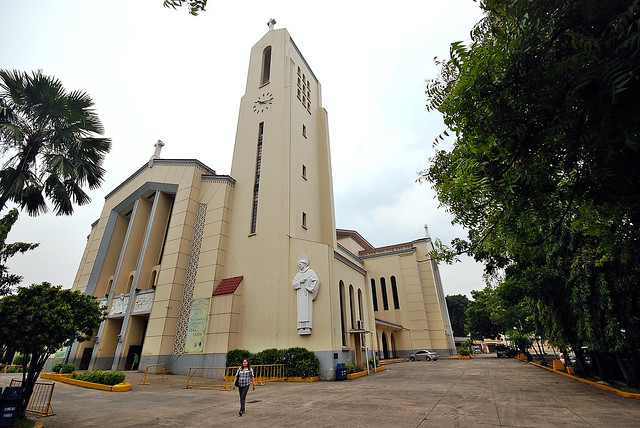 After the Second World War, the Dominicans constructed the sixth church in a new location. They built it on a portion of land they had purchased in Quezon City. The Dominicans commissioned José Ma. Zaragoza to design the building while he was still a student of architecture at UST. (Santo Domingo Church was part of Our Manila Pilgrimage Tour last Year ; Check : Manila Pilgrimage Tour) 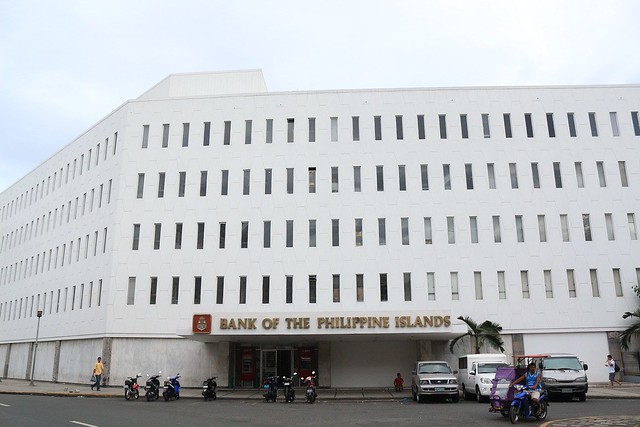 Photo Credit : The Urban Roamer
The former site of Santo Domingo Church is now occupied by Bank of the Philippine Islands.

It’s great to know that the San Ignacio Church will rise soon in Intramuros and I really appreciate the effort done by the Intramuros Administration to bring the church back to its former glory but don’t you think it would have been greater if we’ll get the chance to see all the seven churches back on the same spot they once stood? Sadly, this will no longer happen as most of the former sites of these churches are now occupied by other establishments.

We will finally conclude our Let’s Explore Manila series in my next entry. We ended our Manila Tour by heading to our last Destination in Manila, the Manila Bay! 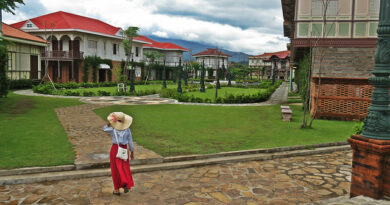 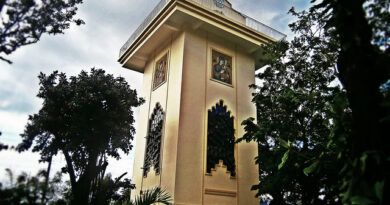 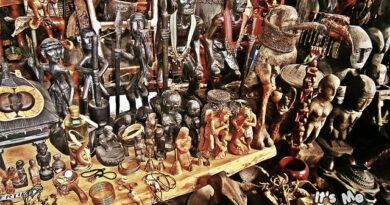 A Trip To Baguio : Cordillera World

One thought on “Let’s Explore Manila: The Seven Great Churches of Intramuros”