We’re back to our Bulacan Pilgrimage series. After visiting the Santiago Apostol Parish in Plaridel, Bulacan (Check: Santiago Apostol Parish in Plaridel, Bulacan), we were supposed to head next to the Minor Basilica of La Purisima Concepcion in Santa Maria, Bulacan. However, the parish was undergoing general sanitation in observance to the pandemic and they were not accepting any pilgrims at that time. We had to make minor adjustments to our itinerary and we had to input a new parish in replacement with La Purisima. We headed next to Baliuag, Bulacan to visit the Saint Augustine Parish.

Interestingly, it was not my first time to witness this beautiful parish. I was lucky enough to be part of the Maria Et Fides in 2016, a youth gathering of Legion of Mary (a mandated church organization i am proudly part of). I wasn’t able to explore the church though. Unfortunately, the same thing happened during our Bulacan Pilgrimage. There was an ongoing mass that time and I wasn’t even able to take a quick peek inside the church. However, i’m happy that i managed to see the Birhen sa Patio upclose, an image that was just episcopally crowned last year. 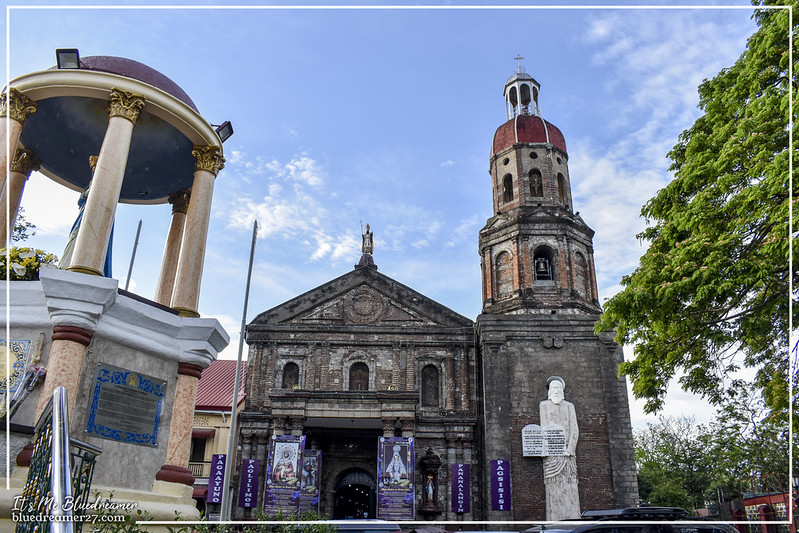 The church of Baliuag is dedicated under the patronage of Saint Augustine of Hippo. It was established on May 26, 1733 by the Augustinians. This is why the town has two separate fiestas; the first one is the “Pistang Bayan” that is celebrated every second Sunday of May to honor the founding anniversary of the town and the other one is celebrated every 28th of August to honor Saint Augustine.

The first church and convent was first established at Barangay Sta. Barbara, Baliuag. The construction of the second church, on the other hand, took place between 1769 to 1774. It was moved to its current location in 1790. Like most old churches in the country, Baliuag Church was also utterly damaged in numerous occasions. These include two major earthquakes that took place in years 1863 and 1880 respectively.

The Baliuag Church underwent several rehabilitation. Some notable changes include the addition of a tall portico that is supported by two sturdy columns at the main door entrance. The towering marble relief of Moses holding The Ten Commandments was added in 1979. The altar of the Immaculate Concepcion at the church patio was erected on May 7, 2003 by the St. Augustine Charity Clinic. 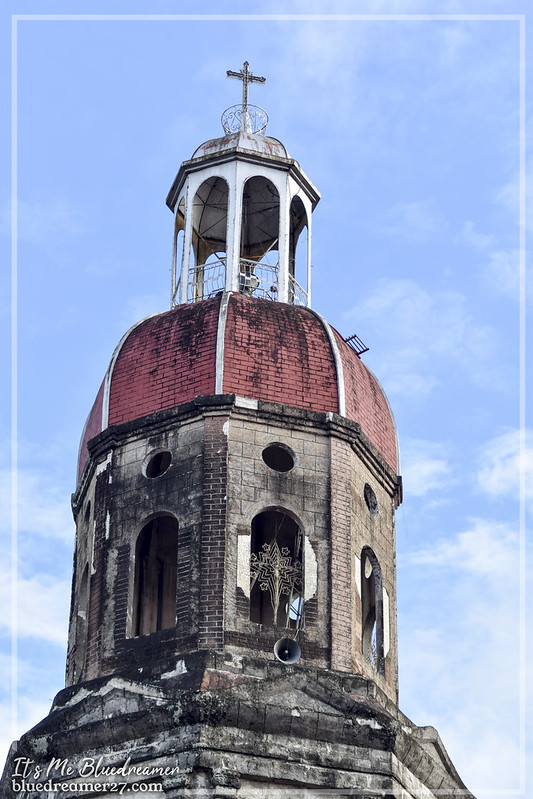 The belfry of San Agustin Parish. It has a small copula on top of its belfry for four giant trumpet loudspeakers. 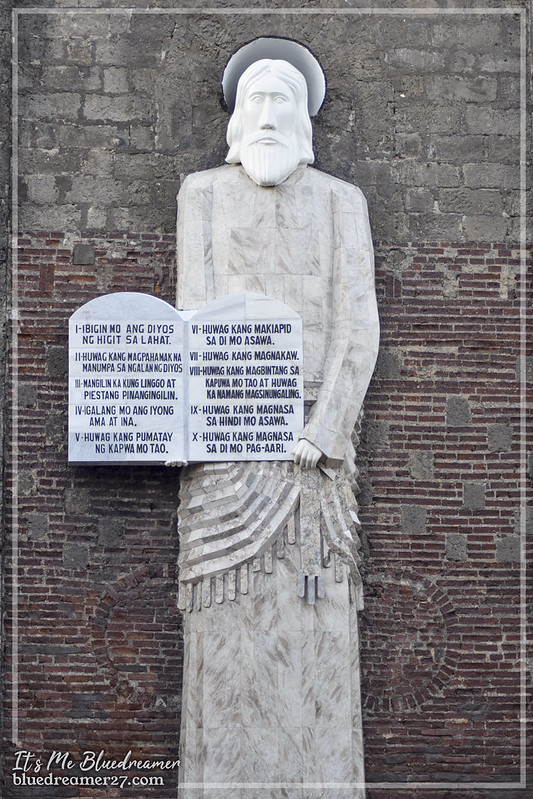 The enormous marble bas relief of Moises is one of the church’s notable features. It was unveiled and blessed on March 7, 1983 as a gift of the Town Fiesta Executive Committee 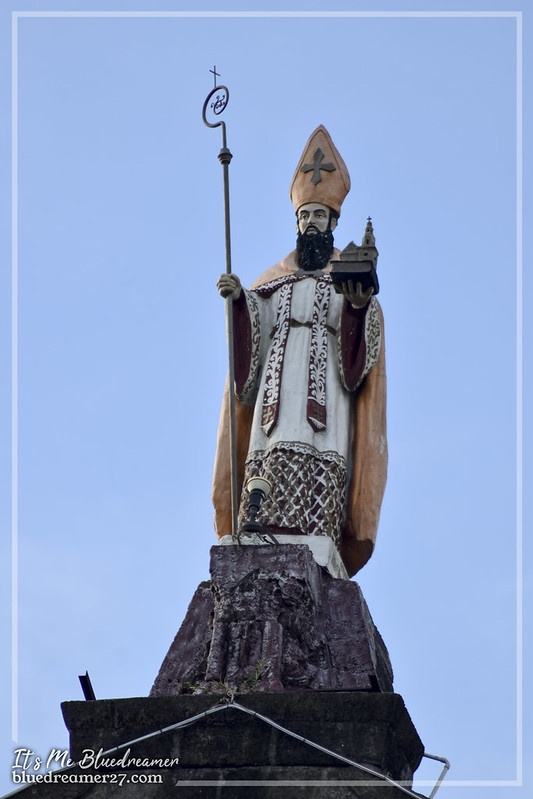 On top of the Pediment is a statue of Saint Augustine. 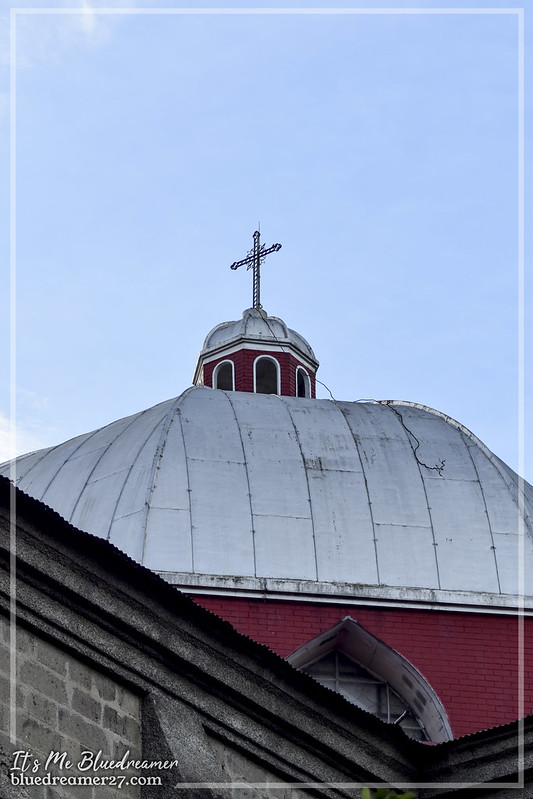 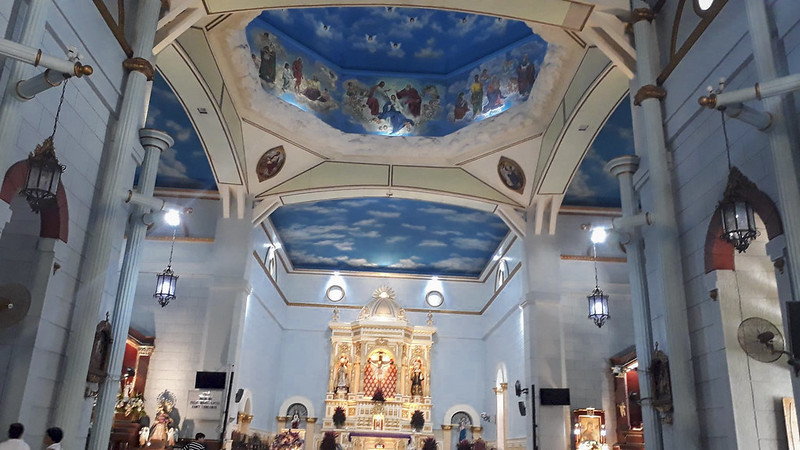 The church also welcomes you to a very inviting interior. This images was taken in 2016. 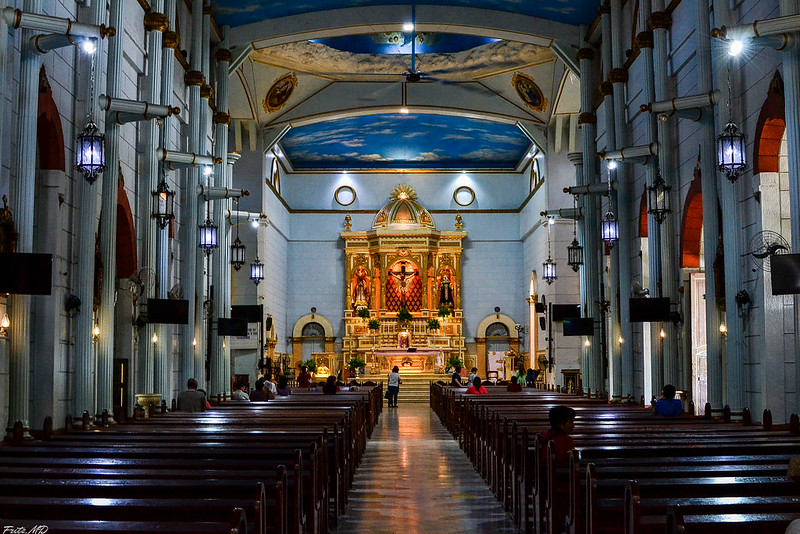 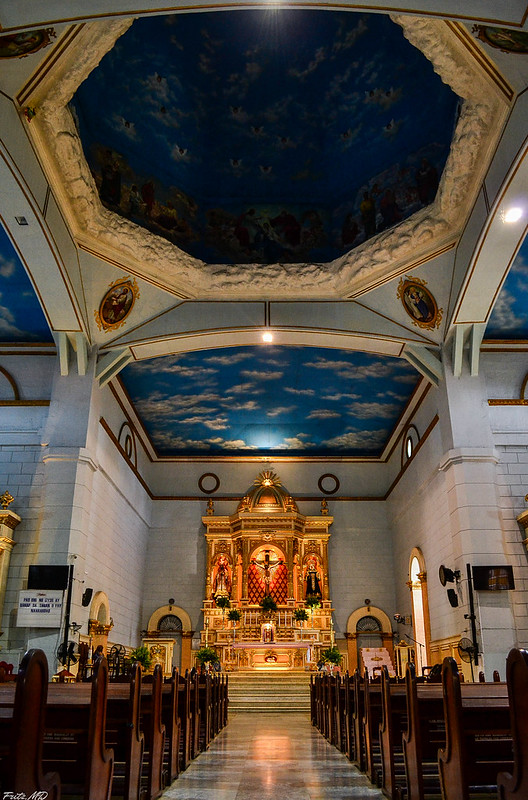 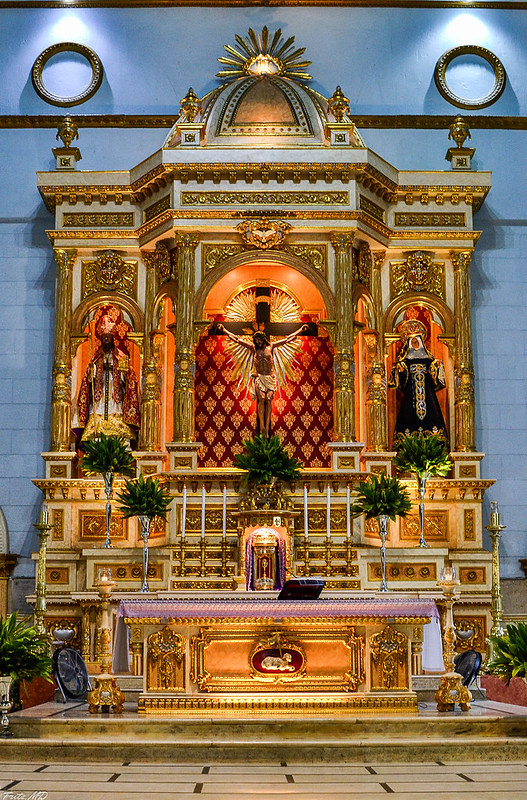 The main retablo is equally stunning. The golden altar has three major niches. It has the image of the crucified Christ in the center on top of the tabernacle and the images of Saint Augustine and his mother Santa Monica on the side niches. (Photo Credit: Fritz Rinaldi De Asis Bernardo) 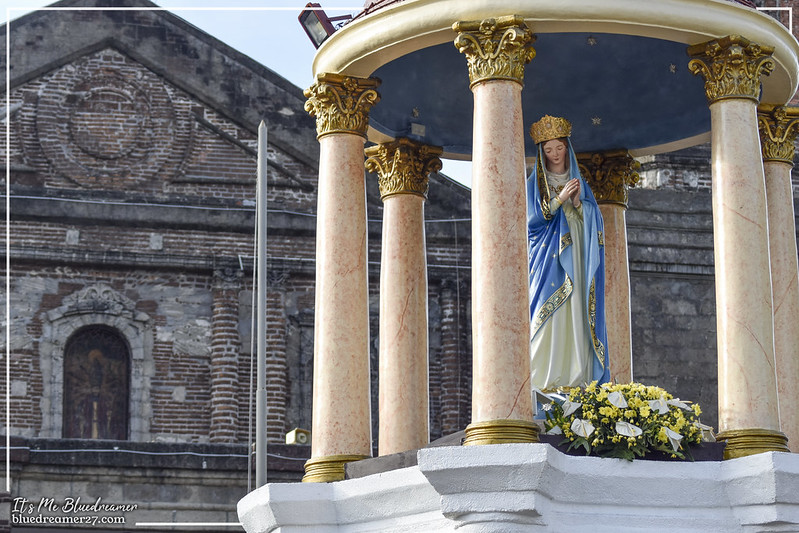 In front of the church is a patio that enshrines the image of the Immaculate Conception. The image of La Purisima Concepcion was ordered in France along with the other materials needed for the Church repairs. It was placed at the patio of the church where once stood a miraculous well that was then flocked by pilgrims called “Fuente de la Purisima Concepcion. The devotion to the Virgin of the Patio developed over the years as the faithful of Baliuag would flock her shrine to pray and offer candles and flowers. 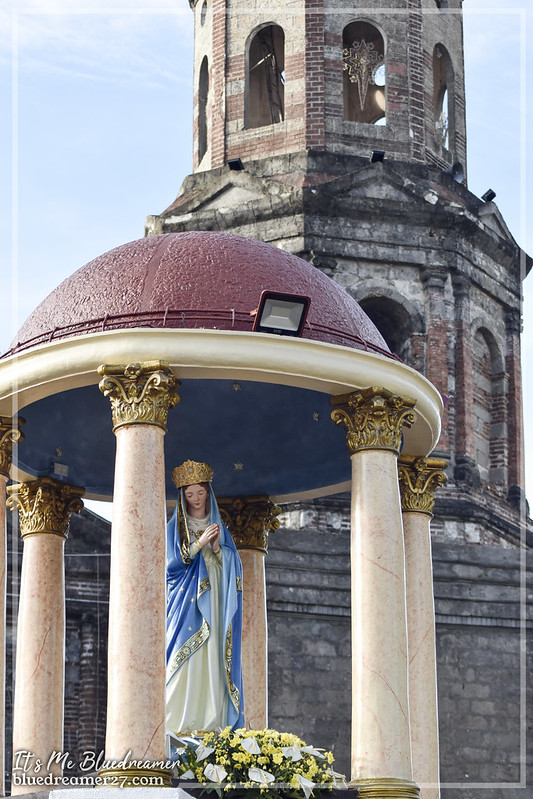 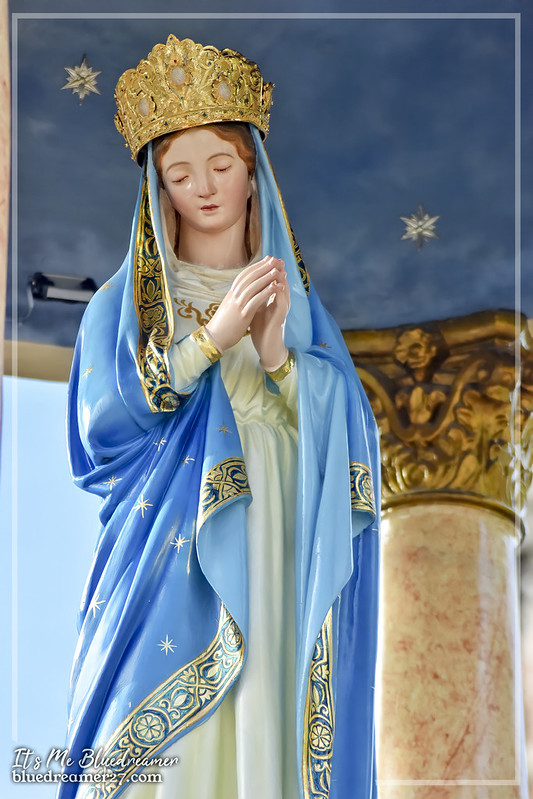 The heavy metal image of Birhen sa Patio is of French origin and has a similar copy currently found in the Church of the Twenty-Six Martyrs in Oura, Nagasaki, Japan 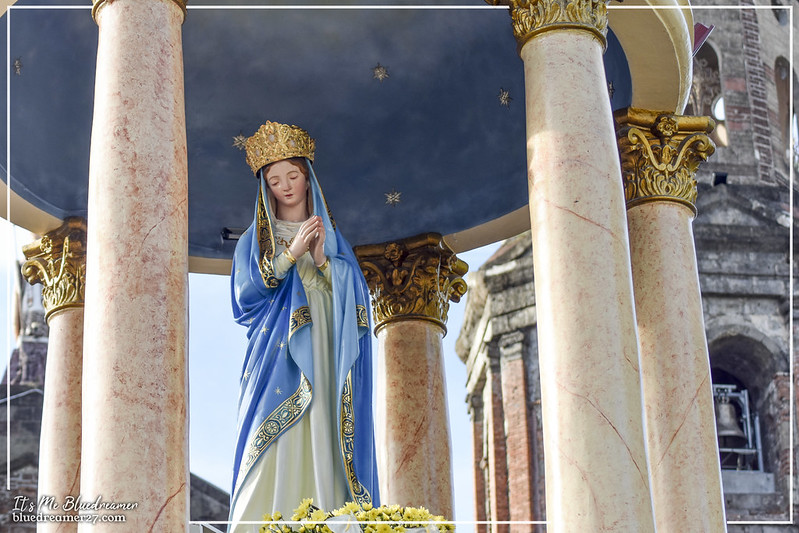 After the Baliuag Church, we headed next to our final destination. We decided to visit the Santo Niño Parish in Bustos. I will post more about the church in my next entry. 6 thoughts on “Saint Augustine Parish and the Birhen sa Patio of Baliuag, Bulacan”