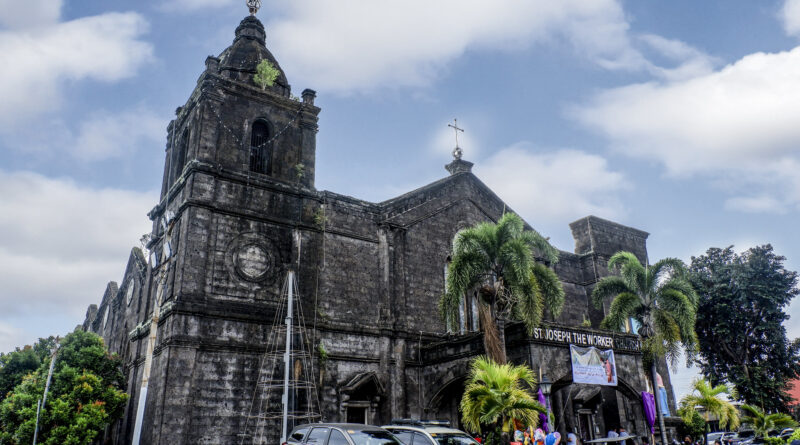 Last year, despite the pandemic, we are grateful that we had the opportunity to explore the town of Bulacan for a pilgrimage visit.  This was done weeks before the Holy Week and before the second lockdown was implemented. There is a great number of beautiful and historically-significant churches in the province of Bulacan and unfortunately, we only have a day to explore the place. We had to pick seven churches and we actually do not have a concrete itinerary for this trip. We had to make sure though that we need to include the historical churches in Malolos as well as the Saint Andrew Kim Taegon Shrine in Bocaue. 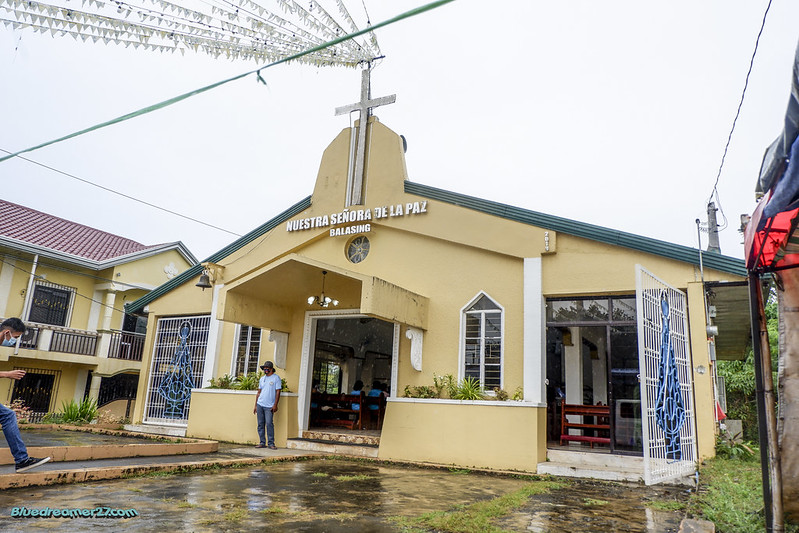 A small chapel of Nuestra Señora dela Paz in Balasing

Since we do not have a concrete plan for this pilgrimage, we have no idea which one should go first and we just let our driver to decide. We ended up with San Jose Del Monte, Bulacan to start our pilgrimage. We actually went first to Adventure Resort in Norzagaray but prior to that we visited a small chapel in Balasing, Santa Maria, Bulacan dedicated to Nuestra Señora dela Paz. It was actually not part of our original itinerary but it just so happened that we came across this small chapel in Balasing while heading to Norzagaray. It just so happened too that they were celebrating their feast day when we get there. We were warmly welcomed by their parishioners and we also get to see the chapel’s replica image of Nuestra Señora de la Paz. 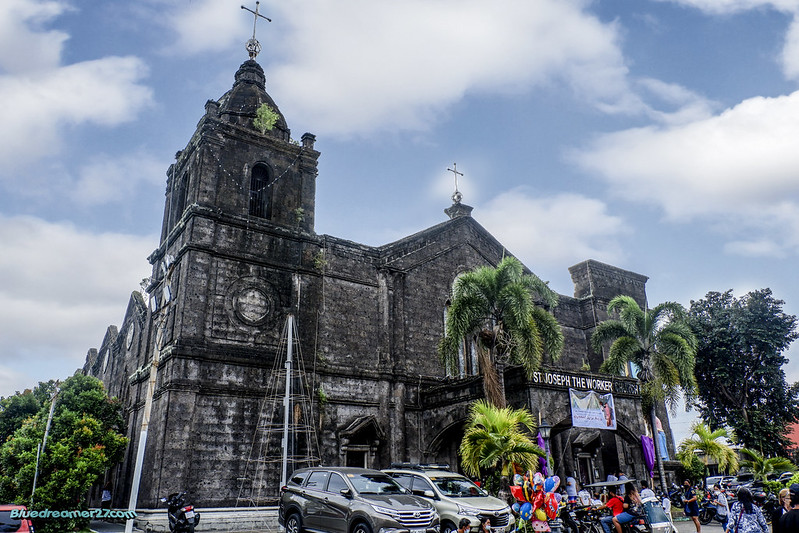 After a short trip to Adventure Resort, we headed to San Jose Del Monte. As the name suggests, the town got its name from Saint Joseph. According to history, the hunters found a statue of Saint Joseph in a mountain forest, hence the name “San Jose Del Monte (Saint Joseph of the Mountain)“. The Saint Joseph the Worker Parish in San Jose Del Monte is considered to be one of the oldest churches in the province of Bulacan. The first church was established in 1751 and was only made of light materials. The construction of the stone church started in 1842 and was completed in 1854.

Like most old churches in the country, Saint Joseph the Worker Parish was also utterly destroyed in multiple occasions. The building greatly suffered from various wars including the Spanish Regime in 1896, the Japanese-Filipino war in 1940s, and the Hukbalahap (Huks) rebellion in 1960s. The church was then remodeled. 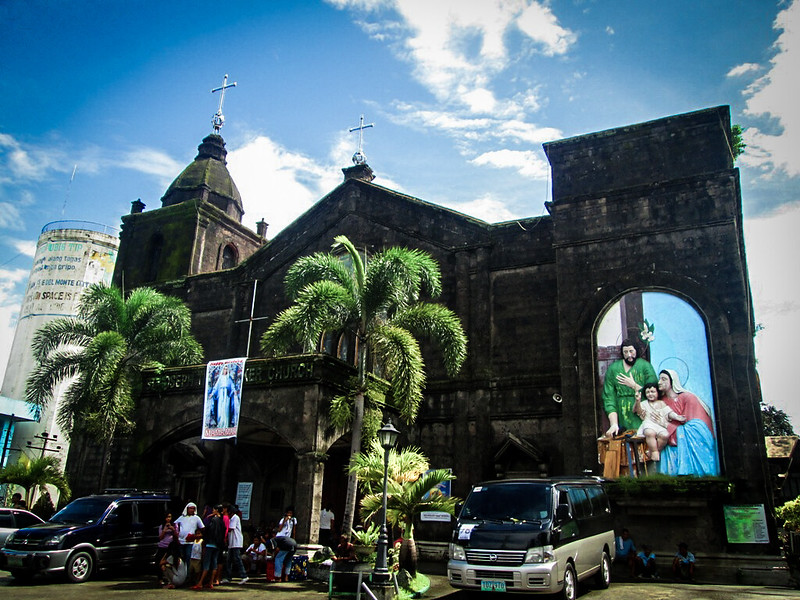 The church features a simple facade with walls built with adobe blocks. Visitors will be welcomed by a concrete porch and a colorful huge bas relief on the right side of its facade that depicts the image of the holy family (Saint Joseph, Mary, and young Jesus). It has a very spacious exterior and parking area. You can also find a statue of the Sacred Heart of Jesus facing the church and the statue of Saint Joseph and young Jesus facing the street.

Complimenting the simple adobe exterior are the stained glass windows that wonderfully illuminates the church’s interior. These include the images despicting the 14 Stations of the cross. Located on the left side of the facade is the original belfry of the church. 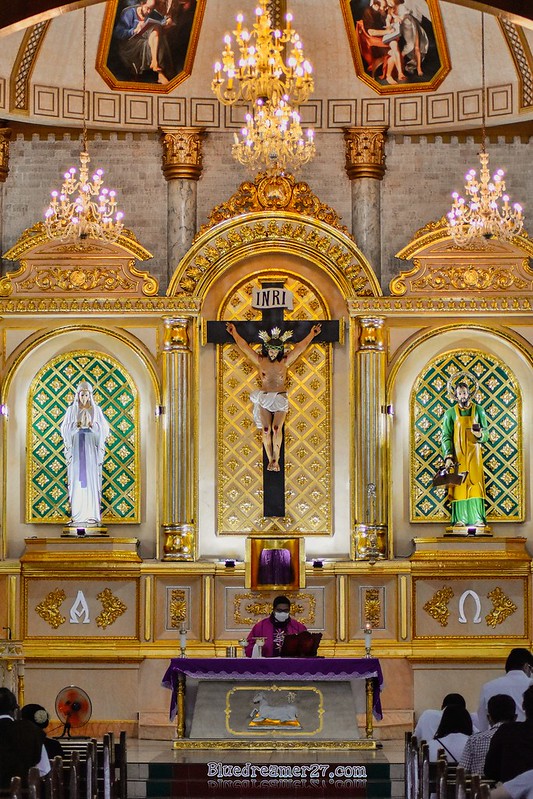 The interior, on the other hand, is equally stunning. I wasn’t able to take many pictures as a mass is being held by the time we get there. The church features a stunning gold altar with the Crucified Christ on the center niche and the image of Our Lady of Lourdes and Saint Joseph the Worker on the sides. 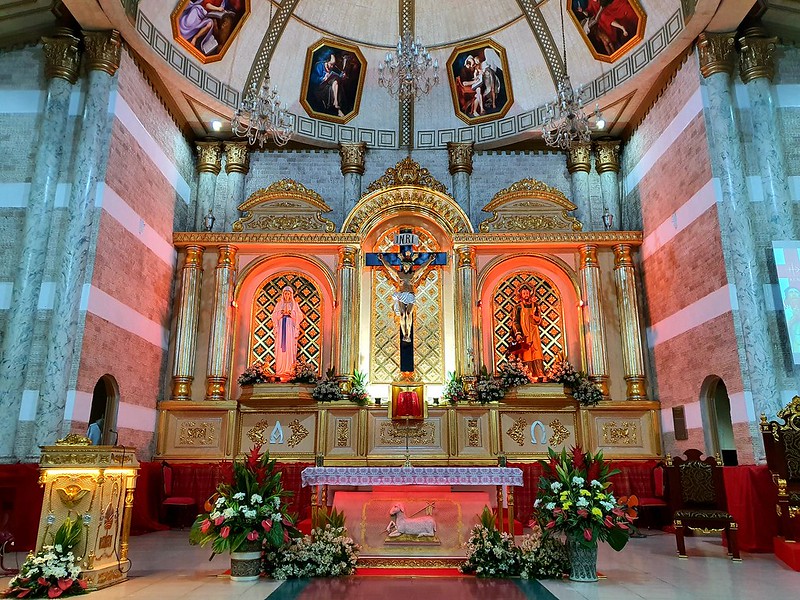 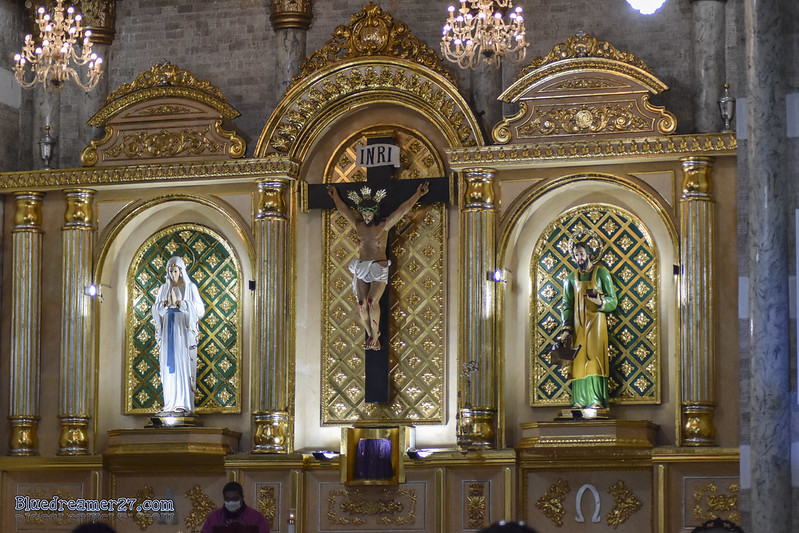 I just learned that this is a newly remodeled retablo that replaced the previous stained glass altars. Above the new altar is a small dome with paintings depicting the four evangelists. 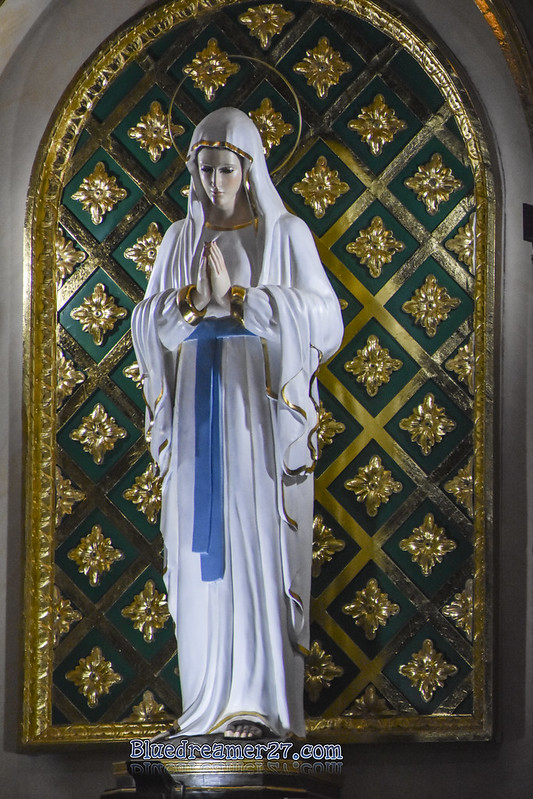 Our Lady of Lourdes image on the main altar 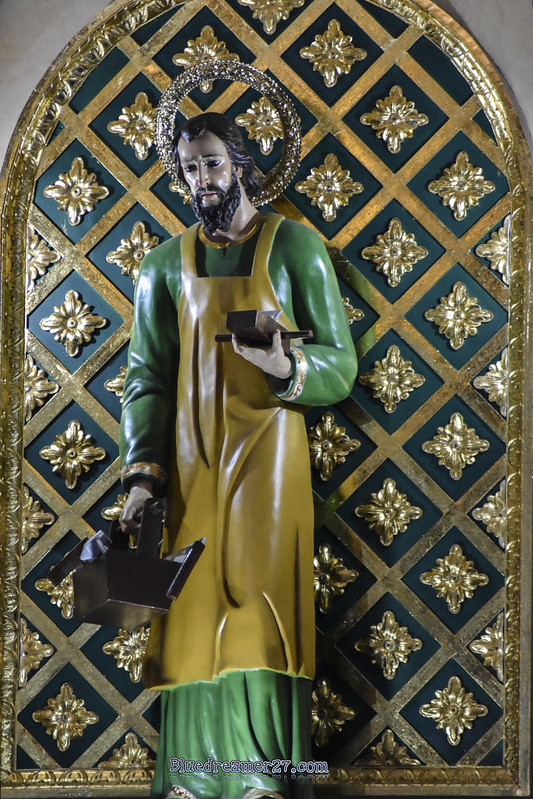 Image of Saint Joseph the Worker on the main altar 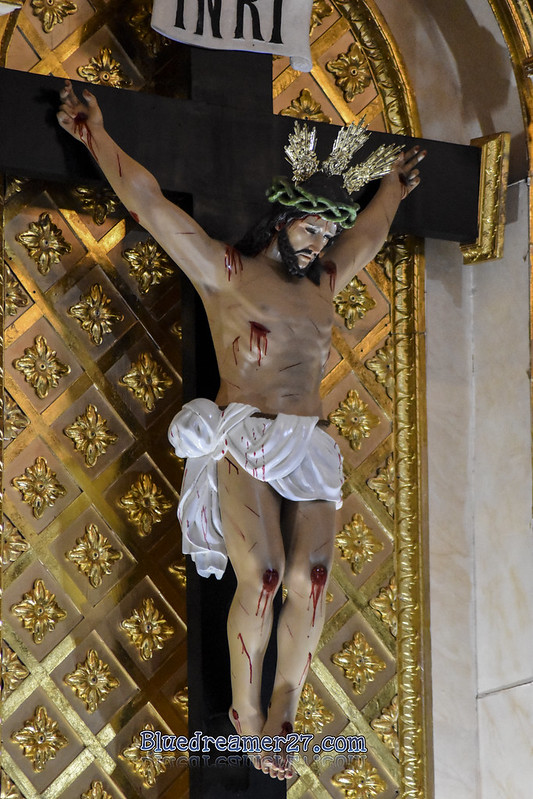 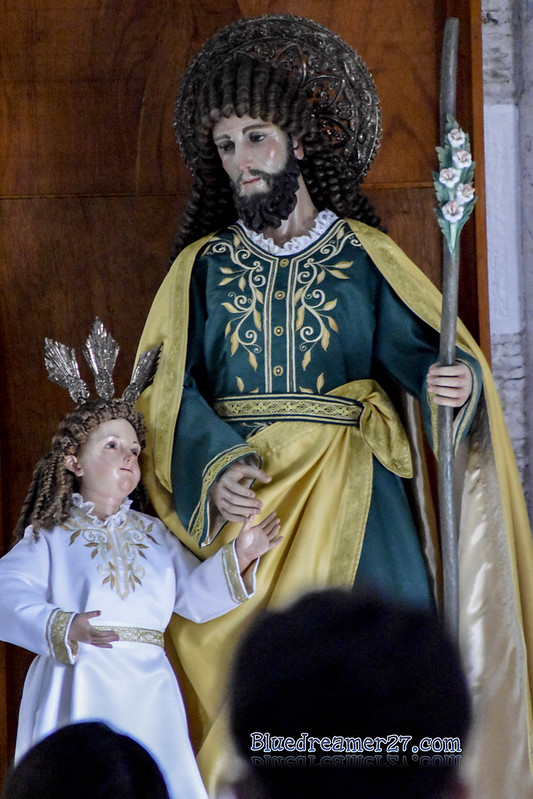 Another image of Saint Joseph the worker displayed in one of its sanctuaries. There were also niches beside the main altar dedicated to the two Filipino saints; San Lorenzo Ruiz and San Pedro Calungsod. 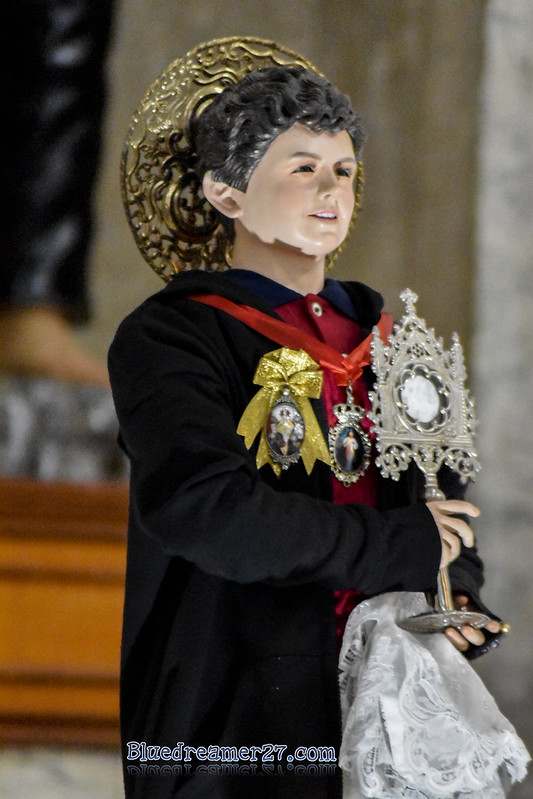 While the Our Lady of Lourdes Grotto seems like another great pilgrim site in San Jose Del Monte, we have a very limited time to explore and we had to visit our next destination. Originally, the next stop is the Saint Andrew shrine in Bocaue but we came across another church in San Jose Del Monte ~ the San Isidro Labrador Parish. (will discuss it more on my next post) 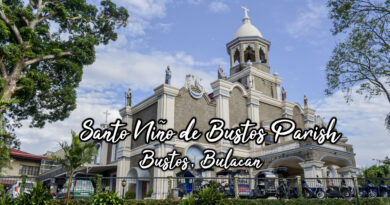