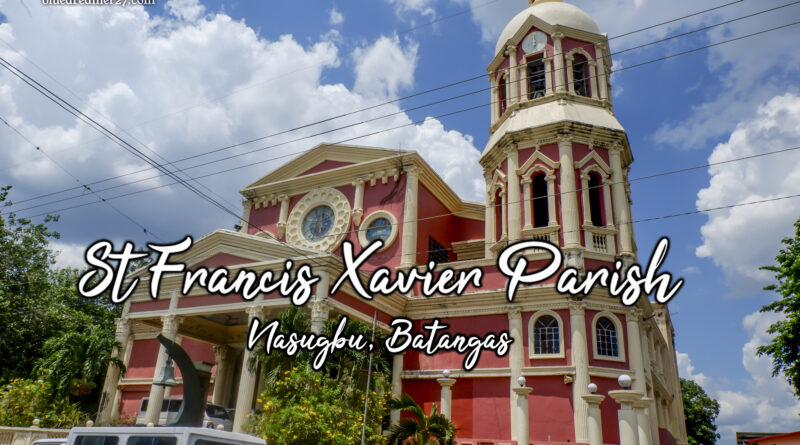 After visiting the Galo River in Nasugbu (Check: The Galo River of Nasugbu), we decided to drop by some of the nearby churches in the town. We concluded our trip by visiting three more sites including the Saint Francis Xavier Parish, the San Antonio de Padua Church, and the Calaruega Eco Park. Not too far from the Barangay Banilad in Nasugbu, we came across this beautiful church dedicated under the patronage of Saint Francis Xavier. This church will never go unnoticed due to its stunning Chestnut red Romanesque façade. 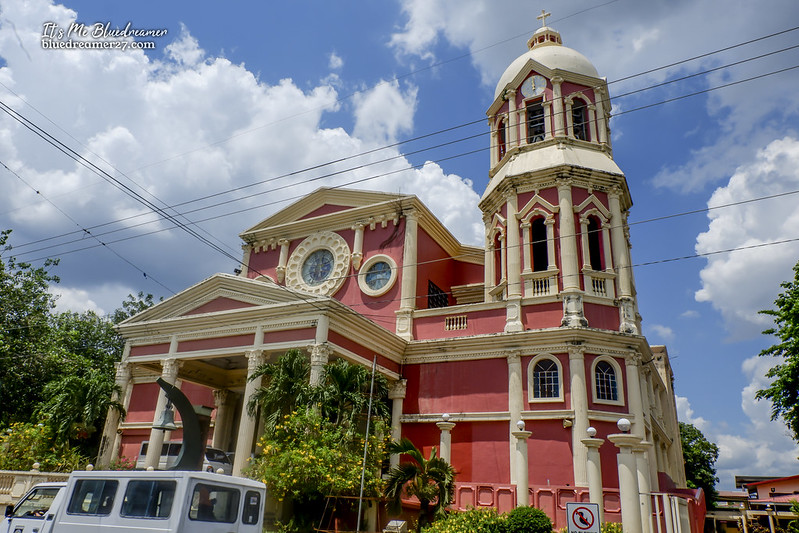 Saint Francis Xavier Parish recently celebrated its 170th anniversary but the current church is not the actual location where the first church was founded. Nasugbu was formerly part of Balayan, Batangas which was established by the Jesuits in 1591 under the patronage of the Immaculate Conception. It was until 1852 that Nasugbu became independent and a church was established under the patronage of Saint Francis Xavier, a Jesuit saint. Prior to this, a small church was already established in the southernmost part of the town in 1804 dedicated to Nuestra Señora de la Escalera (formerly known as Iglesia Catolica De La Nuestra De La Escalera Church). The aforementioned church, however, was burned by the Spaniards at the height of the Katipunan rebellion. 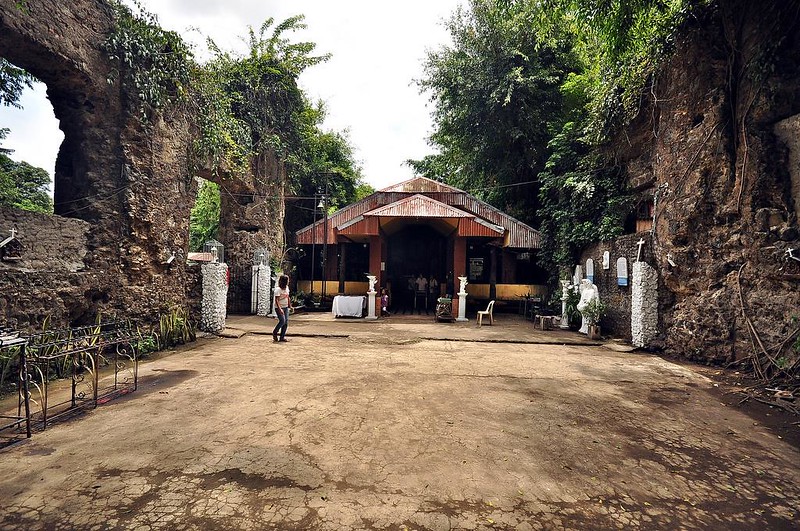 In 1896, during the heights of the Philippine revolution, the town of Nasugbu utterly suffered. There was even an account stating that Spanish troops locked up almost 500 men, women, and children inside the church and then set the church on fire. In 1899, The town of Nasugbu transferred to its present location, leaving the old site with the church ruins in the east, which later became known as Lumangbayan. The ruins of Iglesia Catolica De La Nuestra De La Escalera Church can still be seen today. 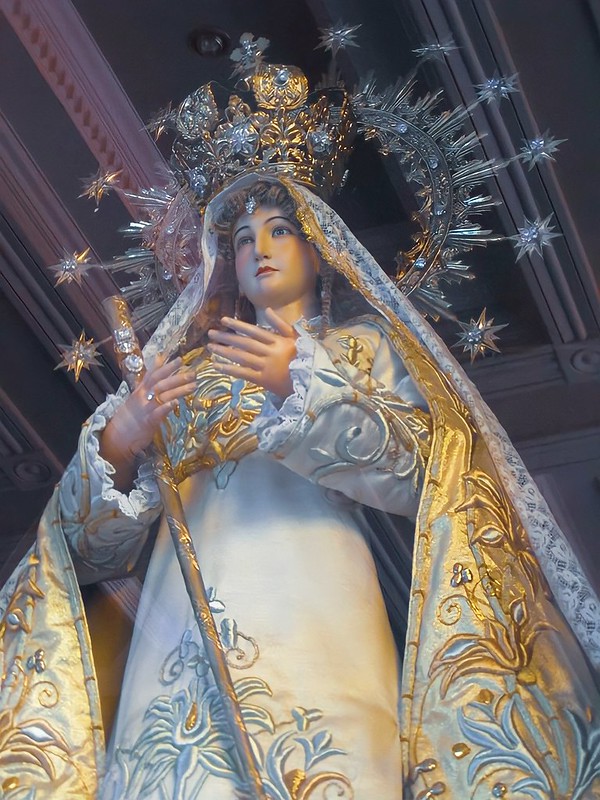 The present church was built in 1959 with Saint Francis Xavier as the principal patron and Nuestra Señora de la Escalera as their patroness. The image of the miraculous Lady of Stairway (Señora de la Escalera) was episcopally crowned on September 4, 2005. It is interesting to note that she is the only Marian image in the country that holds such a title. 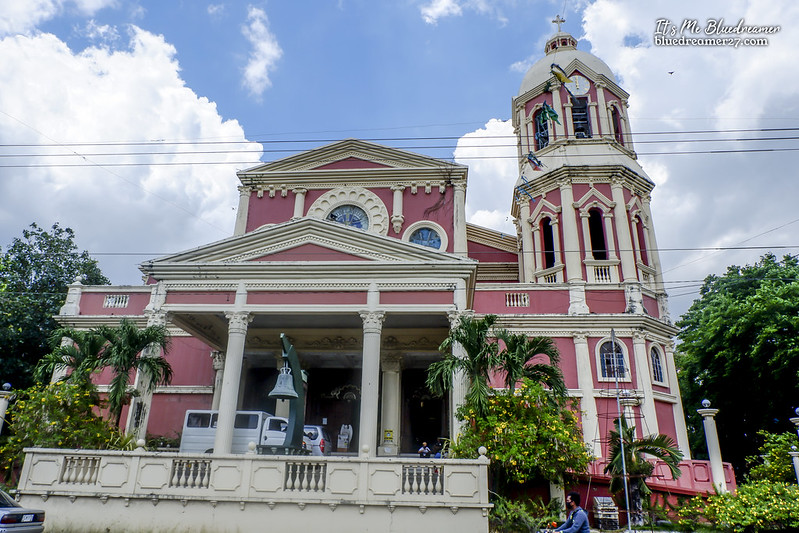 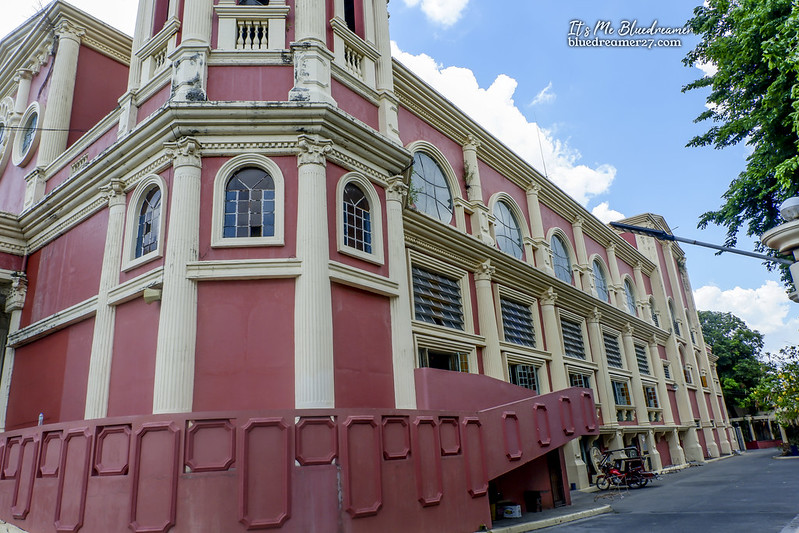 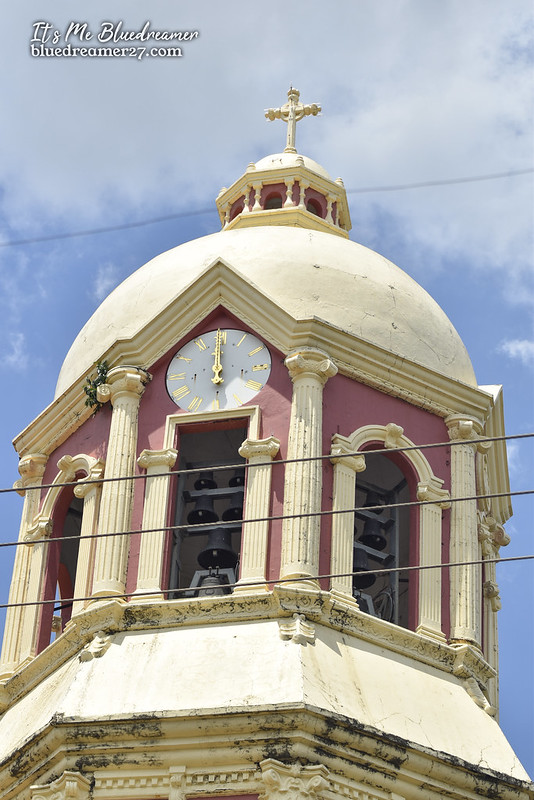 The facade of the church is absolutely stunning. It has a Chestnut red and beige color scheme and is supported by beautiful Corinthian pillars. It has a very large elevated porch and a beautifully ornate belfry. The front facade is topped by a triangular pediment with 3 rose windows. The larger window features the logo of Jubilaeum A.D 2000 (Great Jubilee in 2000). 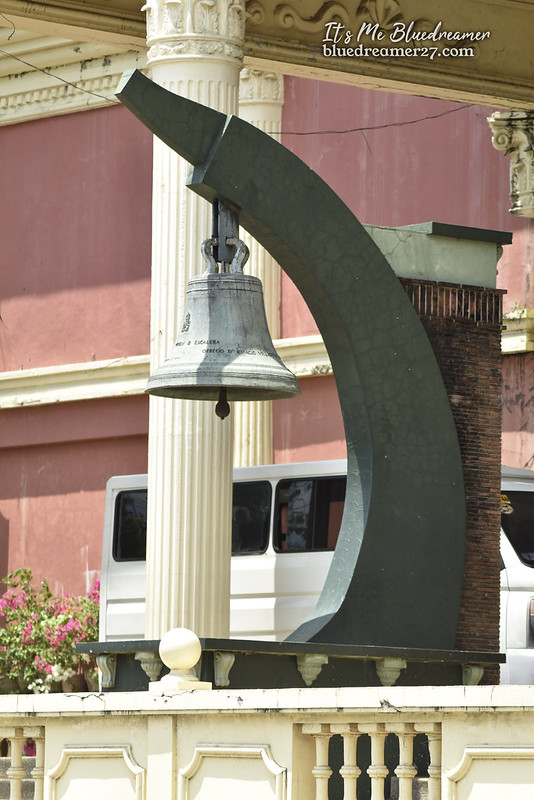 The Old bell outside the church.

Outside the church, you will notice an old bell with the name of Virgen de la Escalera inscribed on it. Although there is no marker or any information supporting its history, the bell most likely came from the old church of the Lady. 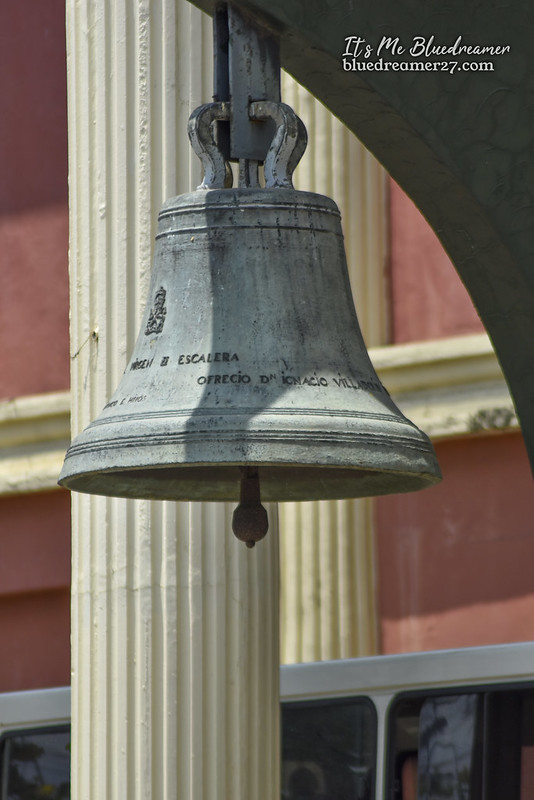 The name of Virgen Dela Escalera inscribed on the bell

The interior of the church is equally stunning. Unfortunately, there was an ongoing funeral mass when we get there so I wasn’t able to take many photos. The ceiling of the church, however, features beautiful trompe-l’œil paintings. The dome features paintings depicting the 12 Apostles, saints, and other important events in the bible. 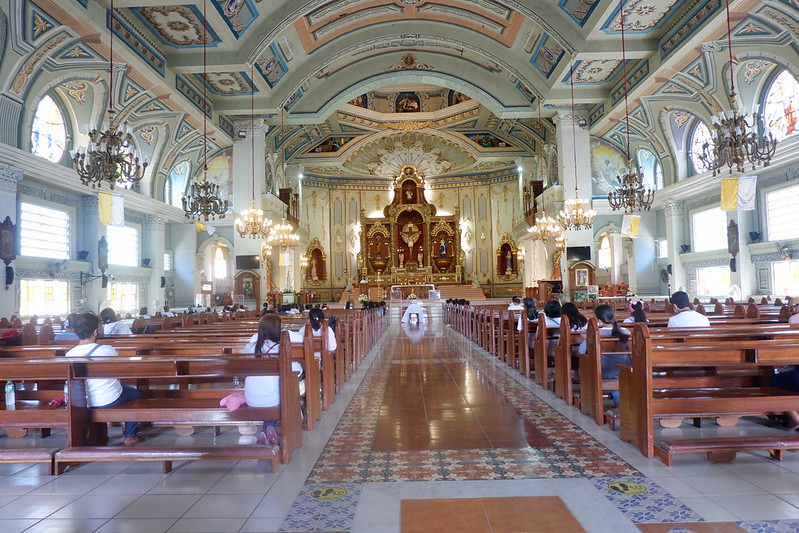 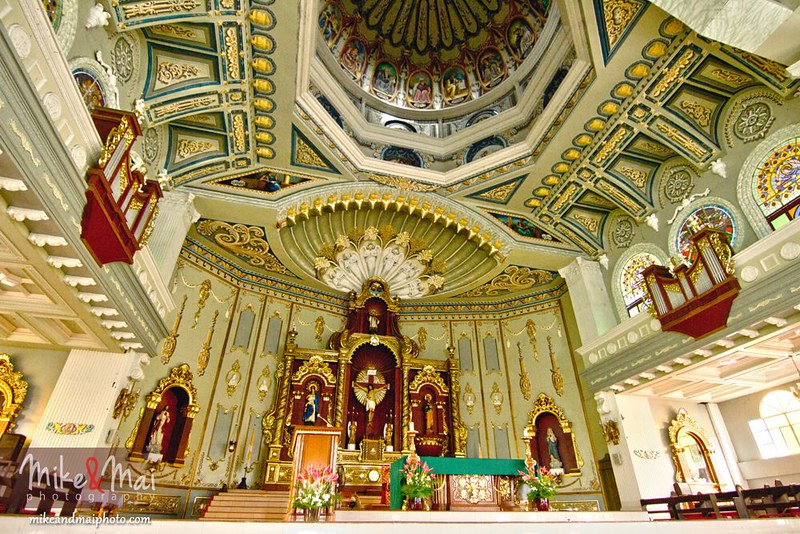 The dome and the altars (Photo Credit: Mike and Mai Photography/ Brideworthy 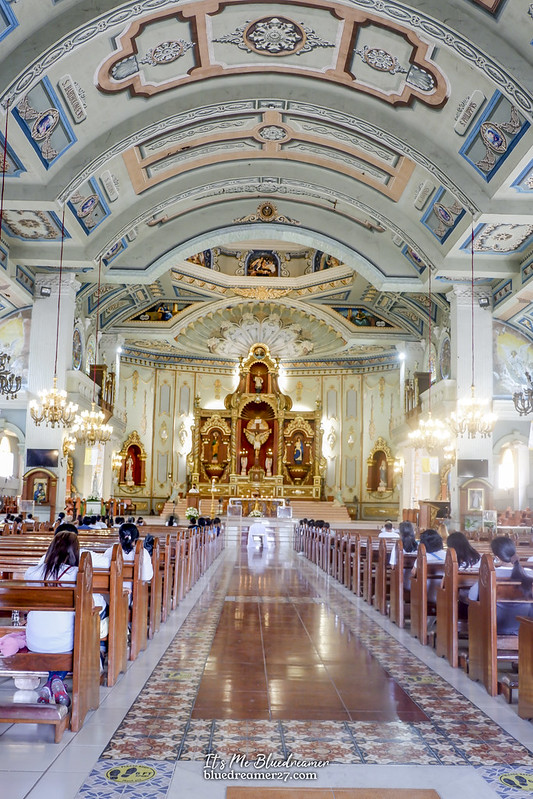 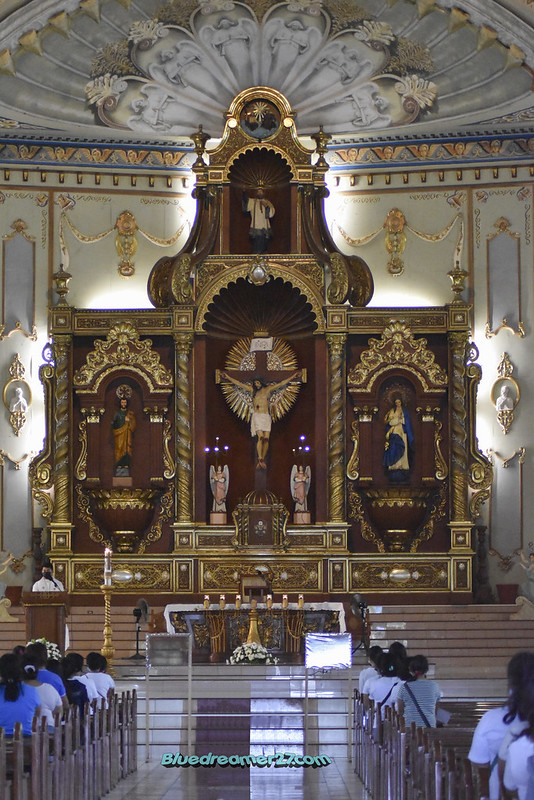 The main altar is divided into three layers. The uppermost part features a small bas relief of the Holy Trinity. The second layer enshrines the image of Saint Francis Xavier. The lower layer features three large niches with the Crucified Christ in the center on top of the Tabernacle and the images of the Immaculate Conception and Saint Joseph on each side. There are also images of the Immaculate Heart of Mary and the Sacred Heart of Jesus in the sanctuary. The image of Nuestra Señora de la Escalera is enshrined on the right side . 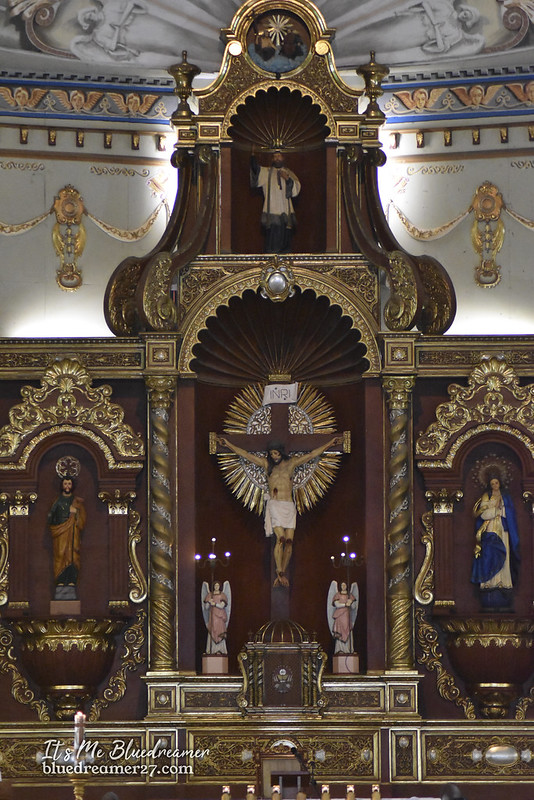 After our quick visit to Saint Francis Xavier Parish, we dropped by another church in Nasugbu, the one dedicated to San Antonio de Padua. I will post more about this parish in my next entry.

In the meantime, feel free to check all the other churches in Batangas that I already blogged about.

Other Places to Visit in Batangas

Baler Escapade : Where To Stay In Baler? 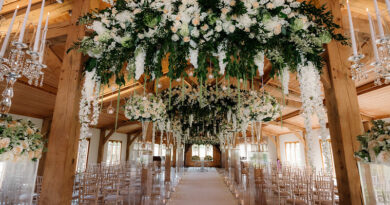 Things To Consider When Getting Married Outdoors in Cheshire